“Through our investigation, we have been unable to determine what this individual’s purpose was in the neighborhood. The timing of this individual’s appearance is in line with when we believe the murders took place. Based on this evidence we’re classifying this individual as a suspect,” said Det. Sgt. Brandon Price of the Toronto Police Service during a news briefing Tuesday.The video shows an individual walking on a winter night along a sidewalk in the neighborhood. The suspect has a head covering and is between about 5’6″ inches and 5’9″ inches tall. Price said they did not know if the suspect was male or female, and could not determine age, weight or skin color.

Despite this, Price says the video is a “valuable piece of evidence” and that the suspect is “highly suspicious.”

Price would not disclose the time the video was captured, except to say it was taken on the evening of December 13, 2017, the night the Shermans were murdered.

Price said police believe that further help or information from the public was now needed and he asked those watching the video to specifically observe the suspect’s “gait” or stride or walk style. In the video, the suspect seems to kick up their right heel when walking.

Police say they have conducted an “exhaustive video canvass” of the neighborhood and that they have other video surveillance of the suspect and of the properties surrounding the Sherman home.

“Based on the timing of when we understand, when we believe the murders took place, we have this individual coming into a very defined area around the Sherman household and remaining in that area for a period and then leaving from that area. So, we have been unable to identify what purpose that person had to be within that defined area and therefore, and the timing is, is in line with our belief as to when these murders took place and so that is why we classify this individual as a suspect,” added Price.

This is the first public update police have offered on the investigation in nearly 4 years since the gruesome double homicide.

The horrific discovery of the couple in one of North America’s most exclusive neighborhoods has rattled family, friends and city residents. Police said in early 2018 that the Shermans’ bodies were found in the basement pool area, side by side, with belts around their necks.

An autopsy revealed the couple died from “ligature neck compression” or strangulation, and police said there was no sign of forced entry into the Shermans’ home.

Despite this, It took several weeks after the discovery for police to categorically determine the Shermans were murdered, they then disclosed that they believed the couple was “targeted.”

Price said the Sherman family would like the public to know that a private, 10 million dollar (CDN) reward was still available for anyone providing assistance in solving this crime.

Toronto investigators say they have interviewed more than 250 witnesses and received 1255 tips from the public. 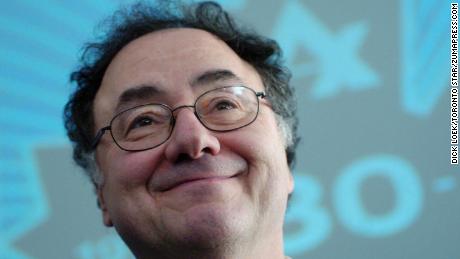 Price said investigators also received video analysis support from the FBI as well as law enforcement partners in Canada. He added that they have canvassed the neighborhood and received a large quantity of data information from cell phone towers in the area as well as other videos.

“We have been able to eliminate the vast majority of people captured on the video, we are left with one individual whom we have been unable to identify,” said Price.

Price added that he did not rule out a “legitimate” explanation for the suspect’s presence in the neighborhood but that the person should come forward if they recognize themselves in the video.

Police concede the video is of “poor quality” and say that releasing it at any other time during the past few years would not, in their opinion, have benefited the investigation.

“It is a very suspicious amount of time, it’s in line with our belief as to when these murders took place,” said Price, although he refused to disclose how the suspect entered the neighborhood and if a car or public transport was used.

Police say they have had this video in their possession for several years but did not want to hurt the “integrity” of the investigation by releasing it.

They say they hope its release Tuesday will lead them to identify the suspect and determine why they were near the Sherman property at the time of their murder.