After a brief reprieve from surging cases in the fall, omicron, the newest and most transmissible Covid-19 variant yet, is tearing its way across the nation, causing a nearly 30 percent spike nationally in cases in a matter of days. As communities roll out eerily familiar safety measures, for some, it’s feeling like 2020 again: In the past few weeks, California and New York reinstated indoor mask mandates, restaurants from Philadelphia to Houston to Los Angeles are temporarily closing amid outbreaks, at-home rapid tests are sold out from coast to coast, and some universities are sending students back online.

My Gentle, Intelligent Brother Is Now A Conspiracy Theorist And His Beliefs Are Shocking

Welcome to the pandemic’s “junior year,” to adopt the darkly comic term that went viral on Twitter this fall. It looks like 2022 is destined to be the third year in a row that’s marked by fear and confusion, positive tests and near misses — and a resounding feeling of failure.

“There is a part of me that’s like, ‘I don’t care! I don’t care at all!’” says Theo McKenna, a 31-year-old bartender and actor in New York City. “But I’m like, I do.” While McKenna is boosted, masking up, and still determined to protect themselves and others, omicron has left them wondering, “What did we do everything for, then?”

That feeling of ever-dwindling resolve and malaise has had many names over the last 21 months: grief, burnout, “languishing,” trauma. Perhaps the most popular is “pandemic fatigue,” which describes the difficulty many well-intentioned individuals have had in keeping up safety precautions over long periods.

“People are especially exhausted because so much energy is spent on ‘what ifs’ and worrying,” says David Sbarra, a psychology professor at the University of Arizona. “There’s enough to worry about about the known-knowns that worrying about all the unknowns just takes a big toll on us after a while.”

As we face the latest “wave,” many are considering what effect this cumulative sorrow has had on us. Two years of data suggest, in short, bad things. The physical and psychic consequences of the Pandemic With No End are shaping up to be devastating, with few areas of our lives left untouched.

These days, it feels as though even the most determined Americans are scrounging around for a clean mask, wondering if it’s all still worth it.

“​​To be honest, if anything, I feel like I fall into the mindset of: I am vaccinated, so I’m just gonna, like, do me,” Jacob, a 23-year-old based in Baltimore, recently told the Atlantic. While the vaccinated can still spread the virus and are at risk of long Covid symptoms themselves, President Biden announced they don’t necessarily need to reconsider their holiday plans — much to the chagrin of many concerned scientists. Infection now, however, seems inevitable. Even public health experts are “mentally bracing to test positive after spending two years dodging the virus,” Dan Diamond recently wrote in the Washington Post. People who never thought they’d get sick are now questioning whether their breakthrough cases should really require 10 days of isolation.

Perhaps a feeling of crushing defeat is to be expected, says health psychologist Alison Holman, a professor in the University of California Irvine School of Nursing. Over two years of relentless chaos, the social, political, environmental, and pandemic pressures have built on each other, grinding aspirations and optimism to dust. “It’s totally unprecedented,” Holman says. “The pandemic is the first time in my life that I’ve experienced something like this: an ongoing collective trauma with many underlying chronic stressors with punctuated acute stressors.”

While we may be done with the pandemic, Covid-19 is clearly not done with us. 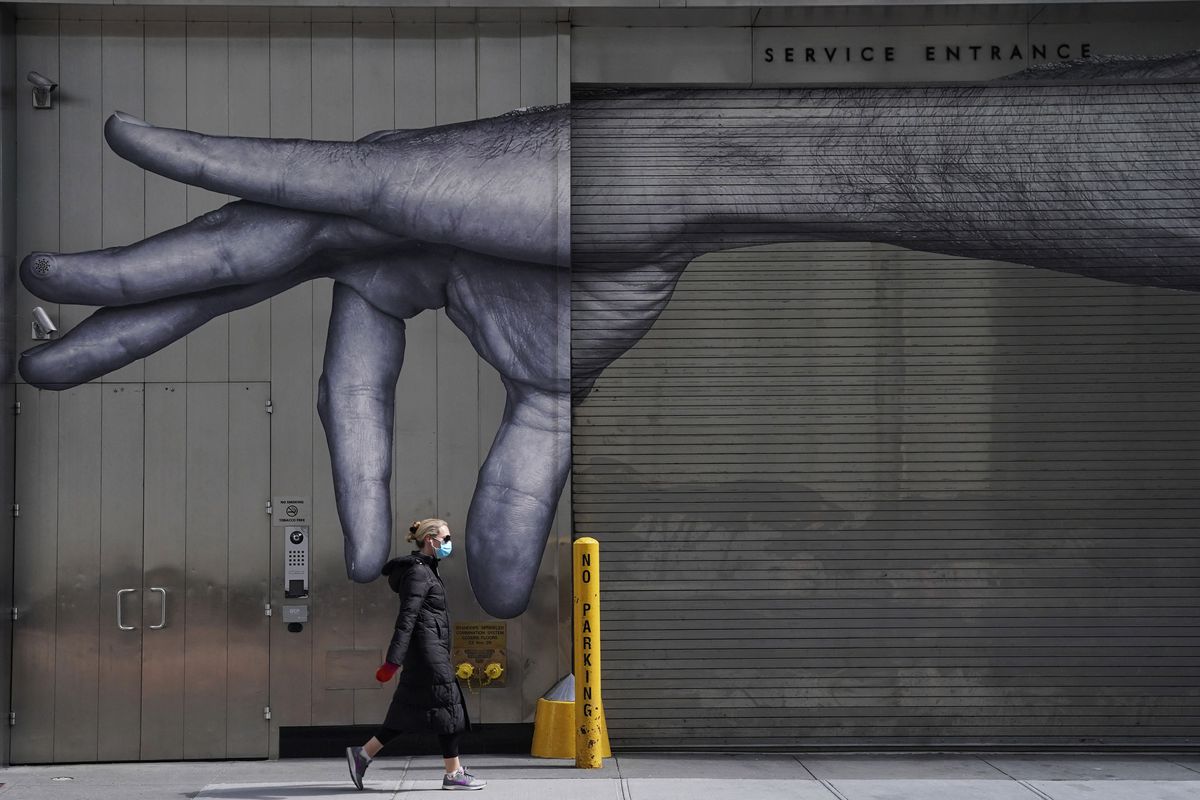 A woman in a mask walks in Midtown New York City in April 2020, early in the pandemic.

Timothy A. Clary/AFP via Getty Images

When the World Health Organization first declared a global public health emergency, many people were gripped by fear of the unknown.

In the first and, to date, best-studied stage of the pandemic — lockdown — essential workers continued to care for sick patients and run grocery store check-out lines. Within weeks, roughly 35 percent of people in the US were working from home and an additional 14.7 percent were unemployed. While US public health officials tried to do their best, messaging was often hopelessly confused, with endless reversals about hand-washing, mask-wearing, and more. Researchers, unsurprisingly, found a three-fold increase in depression — from 8.5 percent before the pandemic to nearly 28 percent in late March and early April 2020 according to a survey of roughly 1,441 American adults published in the journal JAMA Network Open. Anxiety similarly spiked, with about 30 percent of Americans experiencing clinically significant symptoms in the same period.

This initial nosedive in mental health was widely anticipated, in part because of the well-established science of chronic stress. When the body is flooded with stress hormones such as cortisol, the heart beats faster and harder, muscles tense, inflammation increases. Over time, the immune system weakens and the central nervous system, which remains continually on high alert, wears down, and both physical and mental health can worsen. While there are ways to manage chronic stress, one of the most protective features is a strong social network — the very thing lockdown threatened. “We all know those people for whom it’s water off a duck’s back,” says Andrew McLean, a psychiatrist based at the University of North Dakota. “But the majority of us, we need some support.” 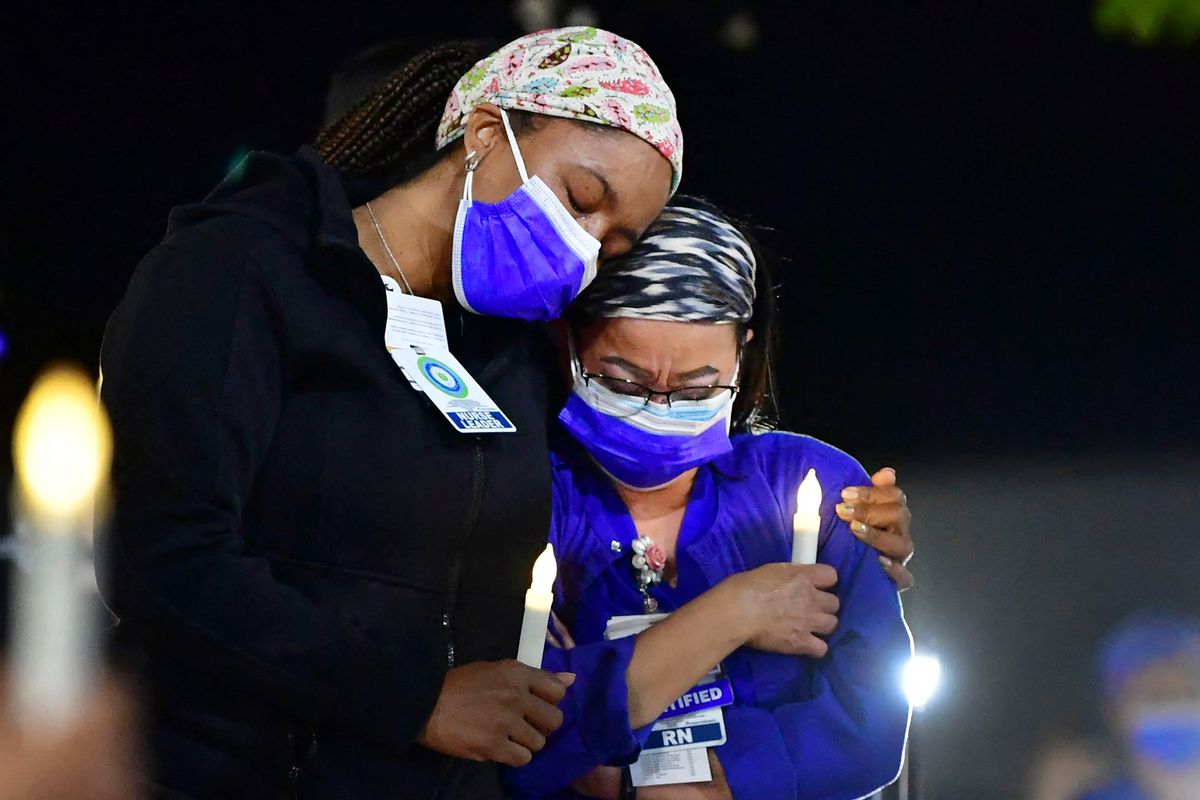 Registered nurses Theresa Austin, left, and Rosell Mahawan grieve and console one another during a candlelight vigil at Kaiser Permanente Hospital in Panorama City, California, in April.

While the coronavirus itself posed the biggest threat to older adults, the emotional consequences of the pandemic response seem to have hit younger people the hardest. Among kids, depression, anxiety, and behavioral issues shot up, affecting two-thirds of children mid-pandemic as opposed to just one-third prior. Doctors also believe the pandemic helps to explain the dramatic increase in tic-like disorders among adolescents, the doubling of eating disorders between April and May 2020, and the startling rise in suicide attempts among girls ages 12 to 17.

As depression and anxiety increased, so did difficulty with basic cognitive function, as people around the world reported a distorted sense of time and memory issues. Under normal circumstances, “you have this rolling agenda for yourself,” says Holman. It gets you through each day and provides the basis for your longer-term future. Canceled plans, flights, classes, and weddings profoundly altered our sense of time.

In the absence of any sense of normalcy, ​​Americans looked for ways to get by. In June 2020, 13 percent of adults reported starting or increasing substance use as a way of managing their pandemic-related emotions, according to the CDC. (Drug deaths rose, too: Between April 2020 and April 2021, more than 100,000 Americans died of drug overdoses — an all-time record.) Other common stress reducers fell by the wayside: Both physical activity and partnered sex declined in the US and around the world. “Coping resources were just spent,” Holman says, “absolutely spent.”

Even if Covid-19 disappeared and all our pandemic problems cleared up today, Holman believes the hardship people have already endured will have knock-on effects for decades to come. Going forward, researchers expect to see more recurring mental illness and continued substance-use disorders, as well as an increase in physical health consequences, including heart attacks and stroke.

One of lockdown’s few silver linings — the overall drop in deaths by suicide by 3 percent between 2019 and 2020 — is feeling a little tenuous. Researchers hypothesize that despite the stress and isolation, many people felt a sense of shared purpose early in the pandemic. A closer look at the suicide data reveals that suicide rates are increasing among Black, Indigenous, and Hispanic men, says psychiatrist Christine Yu Moutier, the chief medical officer for the American Foundation for Suicide Prevention.

“I am very, very concerned,” Moutier says, adding, “this has such a long, uncertain tail to it, and the exhaustion is real.” 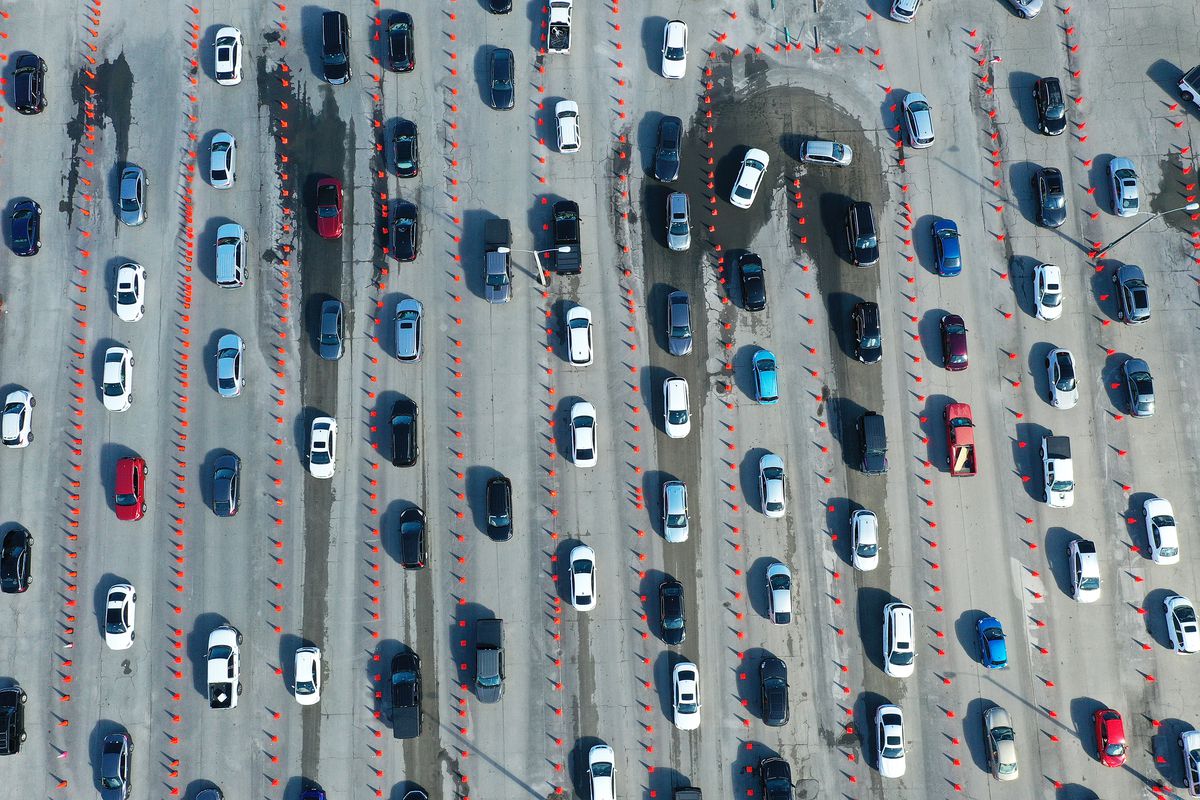 A seemingly endless line of cars waits at a drive-through Covid-19 testing site in Miami, Florida, on December 22.

The vaccine was a moonshot that landed: While the fully vaccinated may still become infected, the evidence to date suggests that their risk of serious illness remains low. But “the US has not moved quickly enough” to contain Covid-19, says Samuel Scarpino, managing director of the Pandemic Prevention Institute at the Rockefeller Foundation. Without investment in widespread at-home testing; robust local, state, and federal surveillance; and vaccines for the rest of the world, the virus is once again evolving out of our control. As a result, Americans’ patience with the long, slow march to endemicity has worn catastrophically thin.

While the data on 2021 is still pouring in, the rollback of governmental support and the fracturing of social cohesion also may have contributed to an even harder year than the one that preceded it. Health care workers are stretched to extremes. Parents hoping for a vaccine for children under 5 continue to be disappointed. And, as hard as it is to believe, more Americans died of Covid-19 in 2021 than in 2020. Now, the rapid spread of the omicron variant all but guarantees more hardships are on the horizon.

There might be one boon to finally surrendering to the pandemic, however: honesty. As masks, vaccines, and other safety precautions became politicized, it became harder for some people who were supportive of attempts to curb the spread of Covid-19 to talk openly about their own difficulties. Some instead opted for toxic positivity. “We all had to lie to each other and say, ‘I didn’t mind it that much!’” McKenna says. “I think that’s something people are more honest about.” For McKenna, masking up “is exhausting, it’s uncomfortable,” they say. “I’ll still do it, [but] I don’t have to like it.” 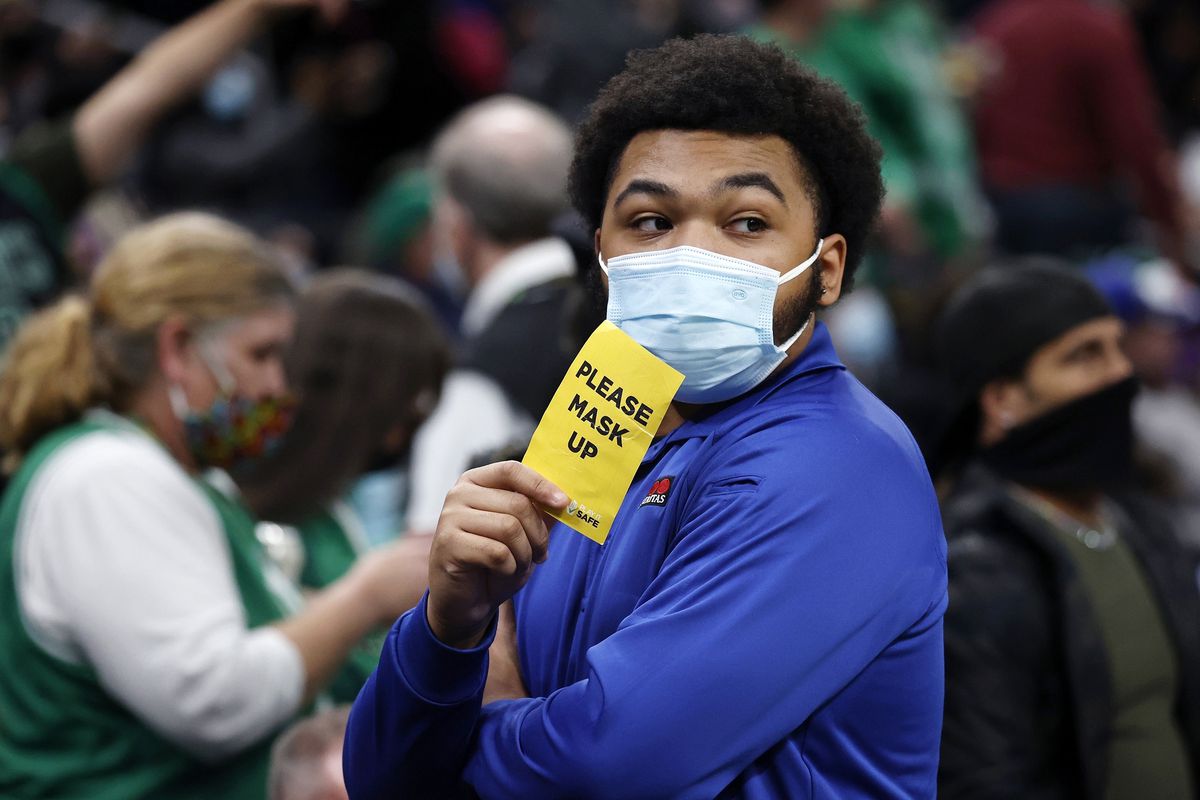 An usher holds a sign reminding people to wear a mask during the first half of the game between the Boston Celtics and the New York Knicks, in Boston, Massachusetts, on December 18.

That may seem small, but this “so what?” sentiment seems to be fueling major societal shifts, including the Great Resignation, the name for the phenomenon of millions of people leaving their jobs in recent months. While everyone’s reasons for quitting are different, many have explicitly cited an unwillingness to accept poor pay and bad schedules, as well as a belief that a better job is out there for them.

Letting up on the moral judgments, perfectionist tendencies, and insistent stiff upper lip of the last two years could prove crucial in other ways, too, says psychologist Nicole Ruzek, director of Counseling and Psychological Services at the University of Virginia. “I hope people are talking about it with each other,” she says of the pandemic’s many annoyances, big and small. “My worry has been that we’re displacing our feelings of helplessness and hopelessness and anger.” Instead of letting things explode, that energy can be harnessed.

So, what’s a bummed-out and boosted American to do? Ride out this pandemic, while working on preventing the next one, says Steven Taylor, a professor in the department of psychiatry at the University of British Columbia and the author of The Psychology of Pandemics.

As surreal as it felt, so much of the Covid-19 crisis was predictable, Taylor says. Everything from botched public health messaging to anti-mask campaigns has happened before — and then was quickly forgotten about. With a little work, Taylor believes, the future could surprise even him.

“I’m hoping this is what makes Covid-19 different,” he says, “That we learn these lessons.”