First, the U.S. diplomats and a handful of allies said “no.” Now it’s the NHL. Some party this is shaping up to be.

It was just bad luck that Beijing landed the Winter Games in what turned out to be the time of COVID-19. But the decision to go ahead as scheduled rests squarely with the hosts and their International Olympic Committee cronies. Here’s hoping that like most of the people who marry solely for money, they wind up having to earn every cent.

The NHL is the most anodyne of the major sports leagues, so unlike the diplomats who bowed out, it wasn’t making a political statement about China’s grave and varied human rights abuses. But just like the IOC, the league’s abiding interest has always been its own bottom line. That’s why the league skipped the 2018 Winter Games in Pyeongchang, an option that isn’t available to all the lugers, curlers, ski jumpers and even figure skaters who need the attention the Olympics brings to pay rent during the three years in between.

David Backes and Ryan Callahan of the United States hockey team at the Sochi Olympics in 2014 — the last time the NHL participated in the Games.

But this was always going to be an easy decision for commissioner Gary Bettman and the NHL players union. The Olympic overlords pay them zilch for showing up and blow a three-weeks-or-so hole in the league’s regular-season schedule, which — to put it mildly — is already a mess because of COVID. Fifty games had been postponed through Tuesday night, and there’s a league-wide pause in effect until next week. Assuming the recently tightened protocols return some measure of control to the league’s schedule-makers, that three-week window to make up games could come in mighty handy.

Who knows, the NHL might even decide to go ahead with its All-Star Weekend in Las Vegas, which would fall on the first two days (Feb. 4-5) of the Olympics. And wouldn’t that be some wicked counterprogramming?

“We understand the decision,” Olympic broadcaster NBC said in a statement Tuesday, “but the Olympics remain the greatest hockey tournament in the world regardless of whether the players are from the NHL or other elite leagues around the world.”

On the plus side, the women’s tournament might pick up some viewers and the scramble to fill the men’s Olympic rosters with minor leaguers, college players and even the occasional beer-league star presents China’s woeful hockey team with an opportunity. 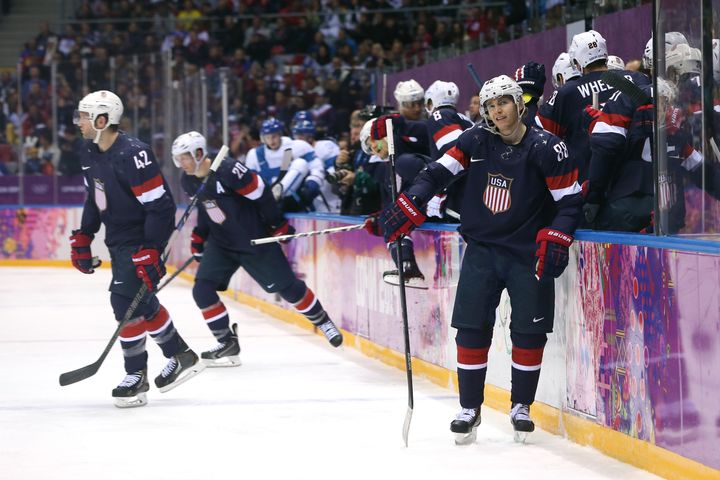 The U.S. hockey team at the Sochi Olympics in 2014 — the last time the NHL allowed its players to compete in the Winter Games.

Just a few weeks ago, the International Ice Hockey Federation was still wrestling with whether to let the team play. Olympic hosts are customarily extended the privilege of fielding a team in every sport, but China was so bad that new IIHF president Luc Tardif had his doubts.

“Watching a team being beaten, 15-0, is not good for anyone, not for China or for ice hockey,” Tardif said in September.

Now the Chinese will be able to call a 7-0 final score a moral victory.

To be fair, it’s a bad deal for just about everybody. The hosts lose face, NBC loses one of its three biggest draws ― figure skating and alpine being the other two – and the rest of us will miss out on what has been a fast, wide-open version of the sport that is better than anything else the NHL puts on during the regular season.

Unfortunately, the players lose most of all. A generation of young stars denied their debuts in 2018 now will have to wait until 2026 at the very least; among them are Canada’s Connor McDavid and Nathan MacKinnon, American Auston Matthews and Sweden’s Victor Hedman.

“I’m still a guy that’s wanting to go play in the Olympics,” McDavid said. “But we also want to make sure it’s safe for everybody. For all the athletes, not just for hockey players.”

But the Edmonton Oilers’ captain also conceded the 21-day quarantine in a Chinese facility for anyone who tests positive at the games — part of the protocol mandated by Beijing’s organizing committee — was “unsettling.” Las Vegas goalkeeper Robin Lehner had already declined the chance to represent Sweden, explaining in a text that having that possibility hanging over his head “is not ideal for my mental health.”

Yet it was the NHL’s fiscal health that mattered most. The Olympics lifted hockey’s profile notably in Salt Lake City in 2002 and especially Vancouver in 2010, where local hero Sidney Crosby’s overtime goal to beat the United States for the gold medal (again) drew nearly 35 million viewers, roughly twice the average audience for the Masters or the NCAA basketball finale. But the debut of NHL players at the Nagano Games in 1998, as well as their appearances in 2006 (Turin) and 2014 were played and televised at odd hours for North American audiences, which are the league’s bread-and-butter.

The Beijing Games will be 13 hours ahead of the U.S. Eastern time zone. For all the other factors that weighed on his decision, all Bettman had to do was glance at the watch on his wrist to confirm he made the right one.