The lessons of “Wonder Woman 1984” are a bit like the movie itself: familiar, direct and winningly sincere. “No true hero is born from lies.” “Greatness is not what you think.” “Beware what you wish for.” There’s a prosaic quality to these cautionary statements, which might have elicited an eye-roll in less assured hands. But here, as in the enormously successful “Wonder Woman” (2017), the director Patty Jenkins and her star, Gal Gadot, have mastered the art of cornball conviction. If what you wish for this season is high spirits, earnest emotions and the unironically delightful sight of Chris Pine in a fanny pack, well, consider it granted.

How the ‘Rust’ settlement could affect any criminal case. What to know

This extravagant, genially overstuffed sequel may be a product of 2020, but its spirit feels gratifyingly in sync with 1984 — a year that, for all its Orwellian associations, predates the chaos and cynicism of our pandemic-stricken, politically deranged moment. And our comic-book movie craze, too: Jenkins (who wrote the script with Geoff Johns and Dave Callaham) channels a moment when blockbuster imperatives, while hardly absent, had not yet pummeled the industry into submission. In 1984, while the likes of Indiana Jones, the Ghostbusters and Gremlins were dominating the box office, one of the few superhero pictures of any note was the ill-fated “Supergirl,” a female-centric offshoot from a beta version of the DC Comics universe.

As it happens, “Wonder Woman 1984” is one of the few superhero pictures of any note this year, albeit for very different reasons. On Dec. 25, kicking off a new Warner Bros. strategy that has angered many in the industry, the movie will be released simultaneously in theaters and on HBO Max. (In the interests of public safety, Wonder Woman herself would urge you toward the latter.) The pandemic’s toll on moviegoing, and the temporary suspension of our collective blockbuster fatigue, may account in part for why this picture makes such welcome company. But it also has something to do with Gadot’s Old Hollywood glamour, Pine’s second-banana appeal and the serio-comic elasticity of Kristen Wiig and Pedro Pascal in key supporting roles. They’re all distinctive parts in a smooth-running narrative engine that channels the buoyancy and big-hearted spectacle of the Richard Donner “Superman” movies, with a few period-appropriate nods to body-swap comedies for good measure.

It begins with a flashback to the distant Paradise Island childhood of Diana Prince (the terrific Lilly Aspell). She is the youngest participant in a mind-boggling Amazonian Gladiators-style arena tournament to which acrophobes, aquaphobes and men need not apply. The spectacle that follows is a dazzler, presided over by the regal Connie Nielsen and Robin Wright, and set to the breathless surge of Hans Zimmer’s score. It will also have important implications years later for 1984 Diana (Gadot), now a curator at the Smithsonian.

Gal Gadot and Chris Pine in the movie “Wonder Woman 1984.”

Diana’s expertise is in antiquities, by which I mean old artworks and ancient languages, not fanny packs — one of several ’80s-beloved accouterments (the work of the movie’s inexhaustibly inventive costume designer, Lindy Hemming) that bear out the accuracy of the movie’s title. “Wonder Woman 1984” is a predictable riot of pastel hues and preppy polo shirts, ankle warmers and rolled-up blazer sleeves. Some of these are modeled by Diana’s soulmate, Capt. Steve Trevor (Pine), a World War I pilot who charmingly transforms himself into a human Ken doll in one of the movie’s more lightly subversive sequences.

Mysteriously resurrected decades after his time (not unlike another captain named Steve, played by a Chris, from a rival comic-book property), Steve is understandably jolted by this strange new world and mostly delighted by its boxy, big-haired excess. In short, he assumes the comically bewildered fish-out-of-water role previously occupied by Diana, with whom he is joyously reunited. She’s entirely at ease with her ’80s moment, if also immune to its worst trends, preferring to rock an elegant chiffon gown — and, of course, her signature Wonder Woman garb, which comes in handy whenever a mall robbery needs foiling.

But the most closely scrutinized accessory on this movie’s fashion-packed runway is not the Lasso of Truth; it’s the high-heeled shoe. That brings us to Dr. Barbara Minerva (Wiig), a nerdy, soft-spoken Smithsonian gemologist who befriends Diana and envies her superhuman radiance; Barbara, by contrast, trips and totters about the office in a pair of heels that become a kind of comic shorthand for bumbling loserdom. But as she and Diana wryly note, those shoes are also a symbol of the everyday pressures brought to bear on all women, for whom it’s never enough to be merely competent and smart (but not too smart). They must also be physically deft, stylishly attired and, of course, sexually available and receptive to men at all times.

Again and again, Diana and Barbara have to endure and deflect unwanted male attention; you may lose count of all the run-of-the-mill boors and slobbering predators they have to fend off, and you’re meant to. If the first “Wonder Woman” broke ground for female-forward blockbusters, then “Wonder Woman 1984” is another rarity, a superhero movie that actively interrogates and dismantles rape culture. And casual sexism, too: Thanks to recent headlines, one of the movie’s most unexpectedly resonant moments arrives when Barbara quietly corrects a man by pointing out that she has a doctorate.

But hey, at least the dude addressing her doesn’t call her “kiddo.” He’s Maxwell Lord (“The Mandalorian’s” Pascal), a sleazy oil tycoon who’s about to take his grift to another level. Laying hands on an ancient “Dream Stone,” he somehow absorbs and maximizes its mystical properties, granting wishes to anyone he comes across and robbing them of their own precious gifts and treasures in return. His powers thus become the currency in an ever-escalating Ponzi scheme, transforming “Wonder Woman 1984” into, among other things, a sharp and slippery critique of its materially obsessed me-first decade. 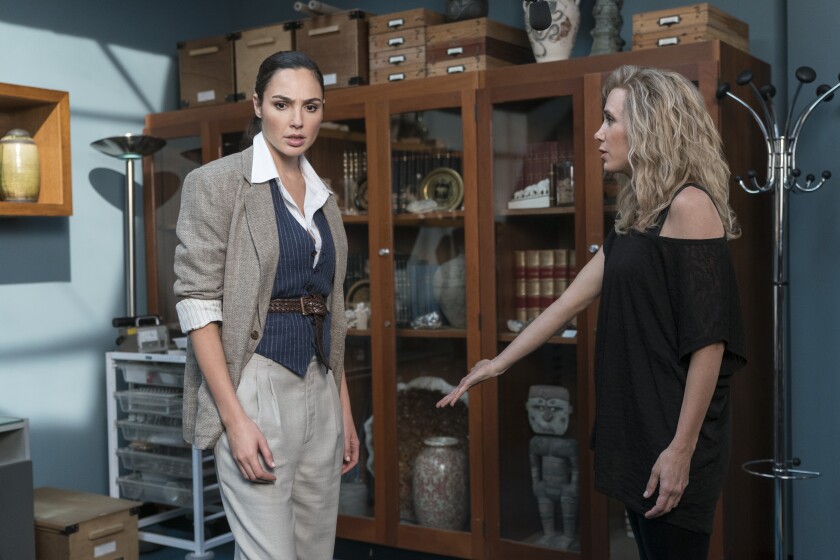 A pathological liar, shameless self-promoter and terrible father (to a young son played by Lucian Perez), Max is willing to wreak global havoc to make himself seem far richer and more successful than he really is. In other words, he may remind you of a certain other norm wrecker who rose to prominence in the ’80s, even if Pascal’s fidgety, self-implosive performance is ultimately too human to be reduced to Trumpian caricature. The actor has always been good at embodying self-destructive hubris, as our fond memories of Oberyn Martell attest, and he snorts and sweats and schemes his way through this movie like an addict on a bender.

Max is not the movie’s only villain, or its only character to succumb to the giddy rush of fulfilling your wildest dreams. I won’t say too much about what happens to Barbara (though DC Comics scholars will be well ahead of me), except to note that she allows Wiig to lean into the prickly aggression that has always undergirded her funniest characters and sketches. Here, as in the romantic comedy “Bridesmaids,” she uses familiar genre beats to build a slyly multi-dimensional performance, one whose emotional layers are even more impressive than her many changes of wardrobe. (You’ll love her as an Olivia Newton-John-style fitness champ, maybe less so in a cheetah costume that feels on loan from another dubious ’80s colossus, “Cats.”)

Both Wiig and Pascal are allowed to go exuberantly over-the-top in a movie that, at two and a half hours and with extended jaunts between Egypt and Washington, D.C., can seem as excessive and unwieldy as the decade it’s satirizing. But aesthetically and conceptually, “Wonder Woman 1984” holds together. The ’80s decor (courtesy of production designer Aline Bonetto) is by turns cheeky and earnest, celebratory and satirical. The greed-is-bad moralizing feels both era-specific and pointedly contemporary. Gadot and Pine give great pillow talk, and their easy screwball rhythms provide not just levity but ballast: They ground a movie in which time, for all its malleability, always feels like it’s slipping away.

This is true even (and maybe especially) for Diana, a timeless hero who feels bound to every moment, and an immortal being whose humanity is never in doubt. Already a paragon of virtue, she is nonetheless as susceptible as anyone to the lure of the Dream Stone, whose powers have the effect of draining her own. That gives Jenkins’ cleanly shot action scenes a heightened vulnerability and danger, though here, as in the first film, Gadot does her most striking work off the battlefield. Her Diana needs only the twinge of an eyebrow to register doubt or self-reproach, only a knowing smile and a muttered “We won’t be doing that today” to bring a gun-toting robber to his knees. She’s magnetic and self-effacing, earnest and knowing, an icon without an ego. She’s an antidote to these blockbuster-free times — and also, I suspect, to some of the blockbusters to come.

Rating: PG-13, for sequences of action and violence

Playing: Starts Dec. 25 in general release where theaters are open and streaming on HBO Max