In the first year of business, Jonathan Webb and his growing team at AppHarvest are riding high on what he calls the “third wave” of sustainable development: high-tech agriculture, following the waves of solar energy and electric vehicles. Since launching the concept in 2017, Webb and AppHarvest have raised more than $150 million in funding while building and opening one of the largest indoor farms in the world on more than 60 acres near the Central Appalachian town of Morehead, Kentucky.

For Webb, who grew up in the area and has a background in solar energy and other large-scale sustainable projects, AppHarvest is both a homecoming and a high-profile, purpose-driven venture that addresses the need for additional production to feed a growing population and reduce imported produce.

Webb’s vision for AppHarvest was inspired in part by a National Geographic article on sustainable farming in the Netherlands, where indoor growing is part of a national agriculture network that relies on irrigation canals and other innovations. He traveled across the Atlantic Ocean to see the farmers in action, then decided it was a venture he wanted to pursue — in his home state of Kentucky, where the coal industry is in decline and unemployment levels are on the rise.

“Seeing that the world needs 50% to 70% more food by 2050, plus seeing that we’ve shifted most of our production for fruits and vegetables down to Mexico — produce imports were tripled in the last 10 to 15 years,” he says. “I would go to a grocery store, pick up a tomato, and it could be hard, discolored. That’s because it’s been sitting for two weeks on a semi truck, being bred for transportation. So first it was seeing the problem, then asking, ‘How do we solve the problem?’”

As part of my research on purpose-driven businesses and stakeholder capitalism, I recently talked with Webb about AppHarvest’s whirlwind initial year in business, successful investor fundraise, plans to go public, and B Corp Certification.

Good for Business, Good for Community 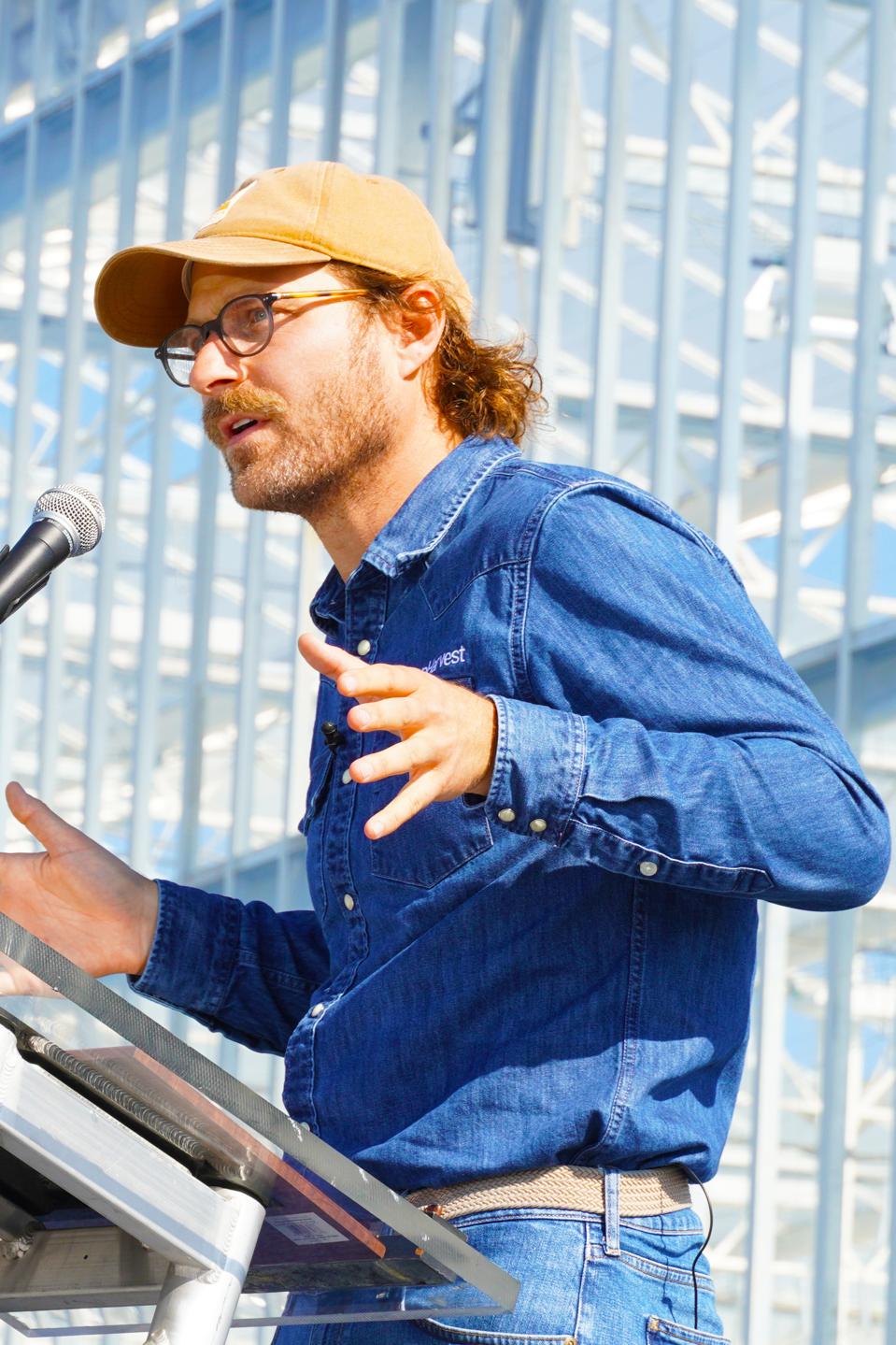 “Where we’re doing what we’re doing is incredibly important. One of our biggest competitive advantages, frankly, is doing it here,” he says. “Some of the hardest-working men and women are the people in this region that power the coal mines, and all we’re trying to do is tap into that and harness that passion. It’s good for our business, but it’s good for communities.”

The location has been central to AppHarvest’s benefit in another way, Webb says, as local enthusiasm for the project enabled swift construction that likely would’ve been a challenge in some other regions.

“It’s all about economies of scale. We have to build a really big facility to get our costs on materials down so that we can compete with products that are being imported into the country from Mexico,” he says. “We built one of the largest facilities in about a year, so speed and scale are definitely advantages for the company, and a lot of that’s possible based on where we’re operating here in this region.”

While the Bluegrass State has been a good home for AppHarvest, Webb wants the business to be a resource for nearby communities and a beneficial workplace for residents.

“A fundamental part of the way we’re building and growing this company is that every entry-level employee gets full health care, full benefits, living wage, paid time off. So we’re not just creating jobs, we’re creating a lifestyle for your career path,” he says. “We want to see people with high school degrees in this region grow with the company and be assistant growers and head growers three, four years from now. I know this region, and I know what people can do here. Those are the success stories that I look forward to having happen.”

Producing needed food and building a stronger workforce aren’t the only goals at AppHarvest; Webb says growing produce sustainably, with minimal impact on the environment, also is paramount.

“We’re land constrained in the world, and water constrained. And we have to grow a lot more food and use fewer resources,” he says. “It’s simple in theory; it’s complex in scale. Just the fact that the place is so big is what makes this challenging. But we’re collecting rainwater on the roof and using it directly on the root of the plants. We’re growing hydroponically, and as a result we can use 90% less water than open field agriculture.

“The way we treat water and handle water and how we use rainwater efficiently is the really biggest driver of resiliency long term for us.”

In building a business to have a positive impact on workers, community, and environment, Webb also created a company that is a natural fit for the B Corporation community made up of businesses that achieve a certification based on how well they incorporate all stakeholders into their policies and practices.

“The impact side of this is incredibly important. We didn’t chase certifications,” he says. “We just did the right things: We’re paying a living wage, we’re offering health care. It’s the right way to do business. And as a result, we get a huge ROI on our dollar.”

Thanks to its bottom-line success and future promise, AppHarvest has found favor with investors, including Martha Stewart and venture capitalists; and is part of a growing cohort of businesses with a social purpose that are finding traction in the public markets.

“Why are we going public now? Because full transparency in agriculture is desperately needed,” Webb says. “We want the people who buy our fruits and vegetables to also have the ability to buy into our company. We want the record. We want the institutional rigor. It’s hard to have this spotlight this early, but it’s making us stronger.”