The NFL Most Valuable Player (MVP) in 2018, Mahomes found Kelce in just the fifth play of overtime. The 32-year-old Kelce then sprinted towards the endzone, his 34-yard touchdown clinching the dramatic victory.

The pair have become one of the most deadly duos in the league, and connecting with his trusty tight-end for the game-winning touchdown was a “special moment,” says Mahomes.

“I don’t think I’ve ever been part of a walk-off touchdown or anything like that,” Mahomes said in his postgame press conference.

“To be in that moment, find him underneath, and him making such a dynamic play. He cut back, ran by people. You would think he’s old, he can’t run by people, but he’s still running by people. And he got in the end zone. It was just a special moment.”

After a 3-4 start to the season, the win is the Chiefs’ seventh in a row, catapulting them to the top of the AFC standings and back into many people’s favorites to contend for a Super Bowl.

Despite their recent good run, it hasn’t been the Chiefs offence which has been carrying the team, instead it’s been the defense which has picked up the slack.

And in the first quarter, the defense once again stepped up, intercepting Chargers quarterback Justin Herbert early on.

Herbert, one of the most exciting young prospects in the league, did eventually warm up though, throwing for two touchdowns and running for another as he led the LA team back into the game.

There was a scary moment during the game as Chargers tight-end Donald Parham Jr. was carted off after hitting his head on the ground after he tried to catch a pass. He was eventually taken to a hospital. 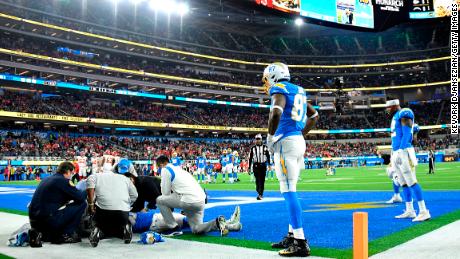 The Chargers gave an update later that Parham was currently undergoing tests, imaging and evaluation for a head injury at UCLA Harbor Medical Center and was in stable condition.

Herbert’s second touchdown pass of the evening to Keenan Allen with just over two minutes left in the fourth quarter gave the Chargers a seven-point lead.

But Mahomes didn’t need long as he got to work.

Through a combination of his big arm and quickness on his feet, the 26-year-old led the Chiefs 75-yards to tie the scores. And after the Chargers couldn’t respond, the game went to overtime.

That would be the last the Chargers saw of the ball, as the Mahomes-to-Kelce touchdown wrapped up the victory on the first possession of overtime.

Mahomes is 25-6 in his career as starter on the road, the highest win percentage since the 1970 merger, with a minimum of 25 road starts. 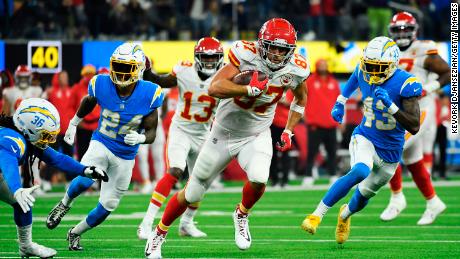 Kelce eclipsed 1,000 yards for the sixth straight season, whereas no other tight-end has even reached five.

“For the old man Kelce, you know everybody’s talking about him losing a step or being off his game, here he steps up and, he looked pretty fast to me,” Chiefs head coach Andy Reid said.