Prosecutors say operators did not properly respond to leak, which polluted miles of California’s coastline.

A United States oil company and two subsidiaries have been charged for a crude oil spill that wrought environmental havoc in southern Californian waters and beaches more than two months ago.

The Texas-based Amplify Energy Corporation and two of its companies that operate several oil rigs and pipelines off the coast of California were indicted by a federal grand jury on Wednesday for illegally discharging oil.

If convicted, the charge carries up to five years of probation for the corporation and fines that could total millions of dollars.

Prosecutors said the companies were negligent in their response to the October spill, which was believed to have been caused, in part, by a cargo ship’s anchor striking the pipeline months earlier. Some estimated the spill polluted 34 square miles (88 square kilometres) of ocean along California’s coast, killing wildlife, forcing fisheries to close and harming delicate wetland ecosystems.

“The pipeline, which was used to transfer crude oil from several offshore facilities to a processing plant in Long Beach, began leaking on the afternoon of October 1, but the defendants allegedly continued to operate the damaged pipeline, on and off, until the next morning,” prosecutors said in a statement.

They added that despite alarms meant to alert the company to the leak sounding eight times, operators continually restarted the pipeline.

“As a result of the allegedly negligent conduct, what is estimated to be about 25,000 gallons (114,000 litres) of crude oil were discharged from a point approximately 4.7 miles [7.5 kilometres] west of Huntington Beach from a crack in the 16-inch pipeline,” it added.

Prosecutors added that pipeline workers had not received adequate training to understand the leak detection system and the operating crew was “understaffed and fatigued”.

Amplify has maintained their detection system was not functioning properly, and was indicating a potential leak from a platform where no leak was occurring. The company has said the actual leak was kilometres away from where the system indicated.

“Had the crew known there was an actual oil spill in the water, they would have shut down the pipeline immediately,” the company said, according to the Associated Press news agency. 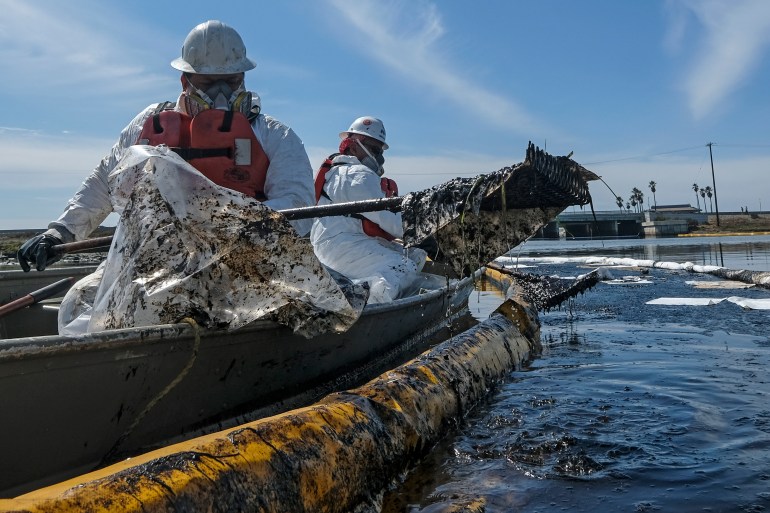 The October spill, the source of which took days to determine, reignited a debate over the presence of oil platforms just a few miles from the densely populated southern California shore.

Shortly after, about three dozen environmental groups sent a petition to the US Department of the Interior, calling on the government to cancel oil and gas leases in the area.

A total of 23 oil and gas platforms operate in federal waters just off the coast.