Christmas tree ship is ultimate mission for many in Coast Guard

In Chicago, the U.S. Coast Guard is famous for its annual delivery of Christmas trees from Northern Michigan.

But for the crew of the Mackinaw — the Coast Guard cutter that brings those trees, and the largest Coast Guard ship on the Great Lakes — the tree delivery is just the cherry on top of a coveted assignment lasting throughout the year.

This year, the Mackinaw brought about 1,200 pine trees, which are given to needy families. The drop-off in early December capped a five-day mission that started in Cheboygan, Michigan, on Lake Huron.

In charge was Capt. Kristen Serumgard, the first woman to command the Mackinaw. The 240-foot icebreaker and its 55-person crew left Cheboygan on Nov. 30, arriving in Chicago on Dec. 2.

Along the way, the crew replaced large lake buoys with smaller ones that can take more of a pounding in the winter — essential to keeping shipping and navigation lanes open. In the spring, the Mackinaw crew will replace the winter buoys with the larger ones.

In between, from late December through April, the ship’s main duty is to keep shipping lanes clear of ice and help boats that veer off course.

The Sun-Times joined the crew on the last leg of their voyage to Chicago, boarding in Milwaukee and sailing overnight to Navy Pier.

A wreath-laying ceremony takes place in front of the Captain on the Helm statue after pine trees were unloaded from the Coast Guard Cutter Mackinaw at Navy Pier.

The tradition of the “Christmas ship” dates back to the late 1800s, when brothers August and Herman Schuenemann used a wooden schooner, the Rouse Simmons, to deliver trees to large crowds on the Chicago waterfront, earning Herman the nickname “Captain Christmas.”

But he, his brother and their crew were lost in a storm near Two Rivers, Wisconsin, in 1912. The Christmas Ship faded into history and might have stayed there. But in 1999, Chicago attorney Dave Truitt decided to revive the tradition — this time, with the Coast Guard’s help.

The Coast Guard has made the trip ever since.

About an hour after leaving Milwaukee, the Mackinaw stopped at the spot where the Rouse Simmons sank. The crew held a brief ceremony, tossed a Christmas wreath in the lake and rang the ship’s bell eight times, one each for the Schuenemann brothers and their six-man crew. The Mackinaw crew also paid tribute last month to the crew of the Edmund Fitzgerald, a freighter that sank on Lake Superior in 1975, taking the lives of its 29-man crew. 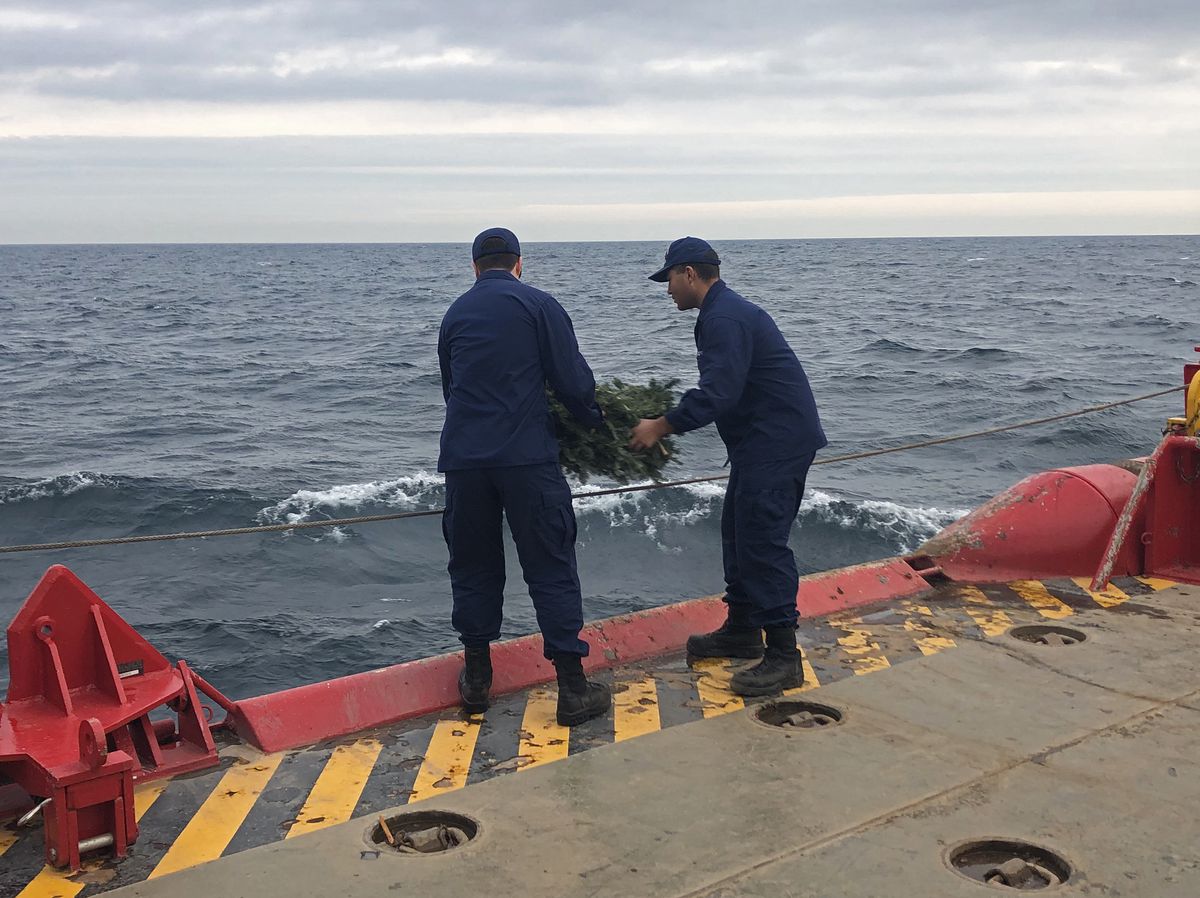 The crew of the Mackinaw stopped on the way to Chicago to drop a wreath in the water where the Rouse Simmons, the original Christmas tree ship, had sunk in 1912.

On the Mackinaw, outfitted with state-of-the-art radar and other technology, an accident along the lines of the Rouse Simmons or the Edmund Fitzgerald is extremely unlikely, Serumgard said.

Despite that, after sunset, the crew on the bridge of the ship works in the dark to better see what’s out on the lake. At night, all lights inside the ship are tinted red to help the crew keep their “sea eyes.”

Crew members typically have four- to eight-hour watch shifts, with at least seven members on duty at all times, even in port. All sleeping quarters on the Mackinaw are above the water line, because icebreaking is so loud that ear protection must be worn, Serumgard said.

The ship, powered by three massive diesel engines, is unusual in that it has no rudders. Instead, it has Azipods — propellers mounted on steerable pods that can rotate 360 degrees. It makes the ship highly maneuverable but also harder to operate, Serumgard said.

Of the 55-member crew on the tree trip, 42 are enlisted personnel and 13 are officers who graduated from the Coast Guard Academy in New London, Connecticut. Graduates must serve at least five years in the Coast Guard after graduation.

The Coast Guard does not hesitate to train newer members for big responsibilities, regardless of rank. After docking in Milwaukee on Dec. 1, 22-year-old Ensign Erin Holland, six months out of the academy, was given the task of moving the ship from the dock, as her commanding officer, Lt. Commander Jacob Loman, watched from a few feet away.

From many places, one crew

Those serving on the Mackinaw come from dozens of states, with almost as many reasons for joining the Coast Guard. Some wanted to serve. Others were drawn by tuition-free education. For still others, like Darnell Geralds, the Mackinaw’s chief storekeeper, it was a chance to see the world.

Geralds, who grew up in Chicago’s Englewood neighborhood, joined the Coast Guard 14 years ago after four years in the Navy. The Mackinaw, he said, is his best Coast Guard assignment.

It’s a sentiment echoed by many. 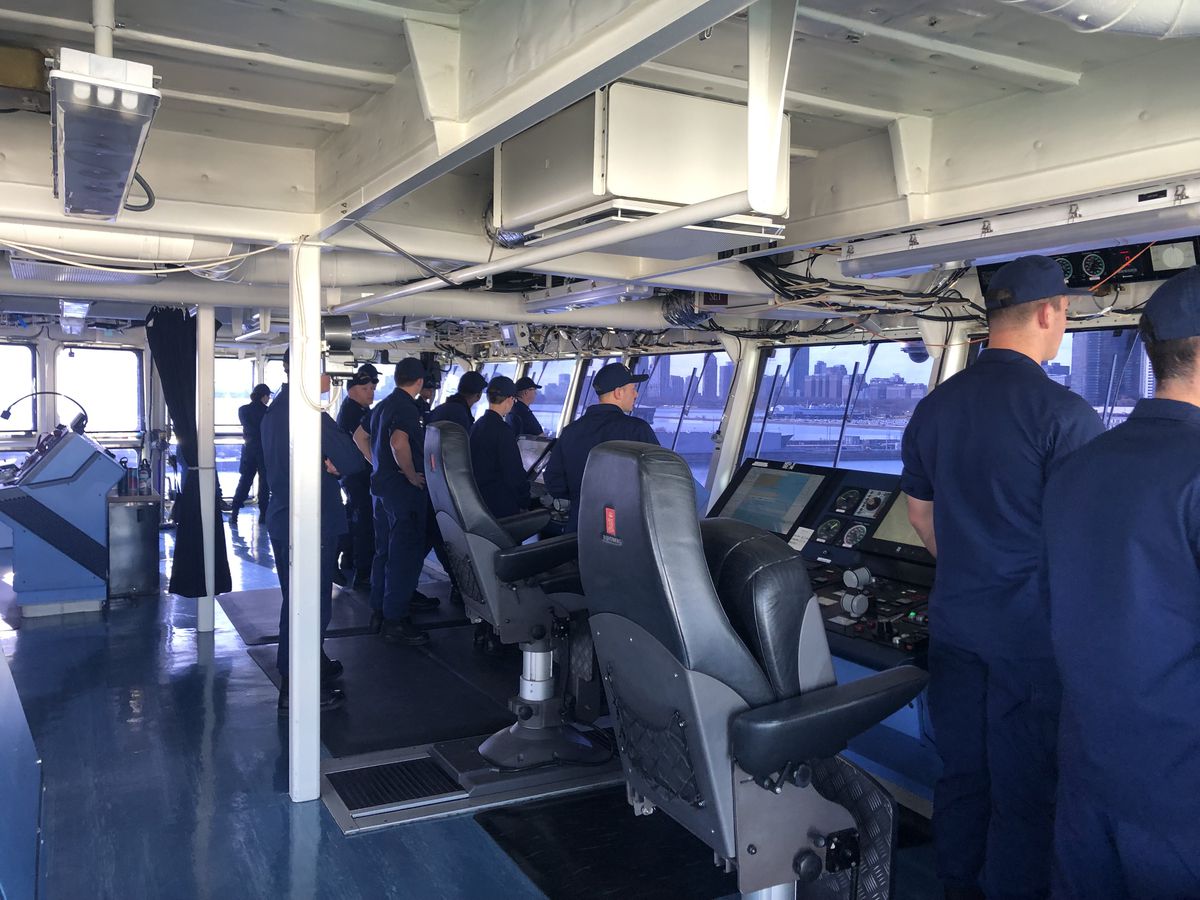 The bridge of the Coast Guard cutter Mackinaw on its approach to Chicago.

“I grew up learning about the Christmas tree ship, and now I’m on it,” said Petty Officer 2nd Class Onalee Rohl, 23. She’s been in the Coast Guard for five years and grew up in Traverse City, Michigan.

For Ensign Joe Collins, 23, who earned a mechanical engineering degree from the Coast Guard Academy, the Mackinaw was his first choice because of the ship’s technical aspects — also, as a Louisiana native, he had never seen snow.

Petty Officer 1st Class Jose Castro, 36, wanted to be on the Mackinaw for a more practical reason — his family lives in Cheboygan, the ship’s home port.

The offloading of the trees is a festive occasion, drawing a crowd of local residents, many of whom attend every year, to Polk Brothers Park in front of the pier.

After the choirs, Lee Murdock, a Chicago-area musician, sang a song about the Christmas ship. Then came speeches by Serumgard and Coast Guard Rear Adm. Michael Johnston. 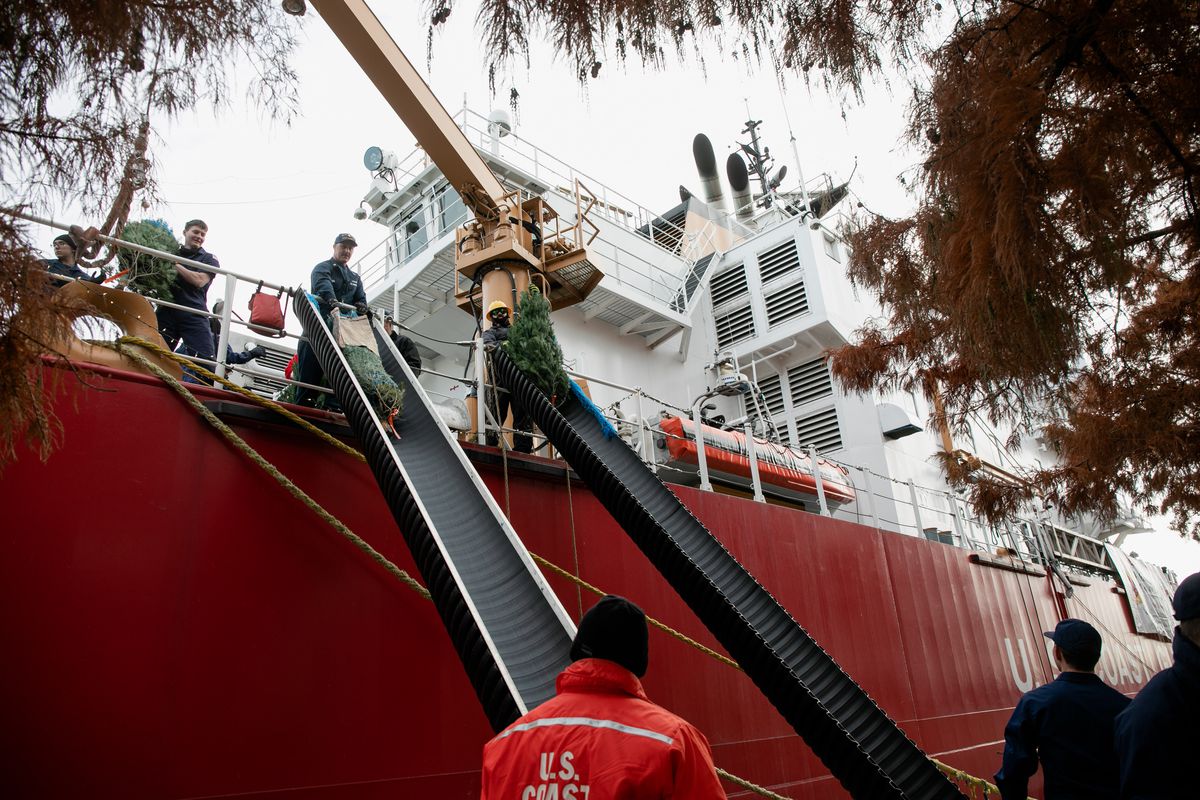 The Mackinaw crew unloads pine trees at Navy Pier, sliding them down the chutes to waiting volunteers. This year, the Coast Guard cutter delivered about 1,200 trees from Northern Michigan, which were distributed to Chicago families in need.

Up on deck, the Mackinaw crew removed the plastic netting that had secured the pile of trees. Then, the crew formed an assembly line from the pile to the side of the ship, sending trees over and then down two plastic chutes.

Waiting below for the trees was a team of volunteers, mostly from youth groups, including the Lincoln Way High School Air Force ROTC, as well as local Girl Scouts, Boy Scouts and Sea Scouts (part of the Boy Scouts but focused on boating).

The volunteers carried the trees onto waiting trucks, which would deliver them to about a dozen community groups. The trees were distributed through a partnership between the Coast Guard and Ada S. McKinley Community Services. 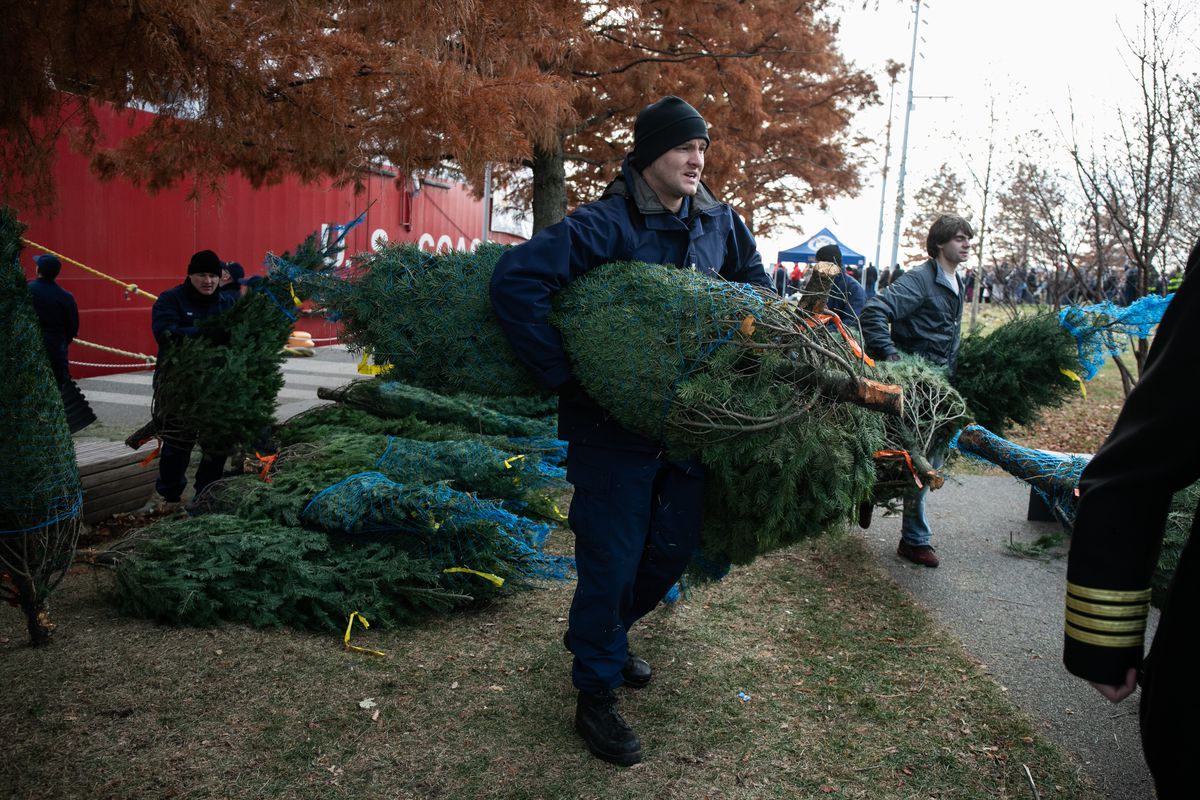 Cadets and members of the U.S. Coast Guard carry pine trees that were unloaded from the Coast Guard cutter Mackinaw at Navy Pier.

Serumgard, 43, a 21-year Coast Guard veteran, became the Mackinaw’s eighth captain when she took over in 2020.

She said along with the joy provided by delivering Christmas trees every year, the Mackinaw is an attractive assignment for many because, being on the Great Lakes, most public interaction is positive.

“We aren’t playing an antagonistic role. There isn’t smuggling of drugs or migrants on the Great Lakes,” Serumgard said. She also said having some “liberty,” or free time, in Chicago, is a huge added bonus to those under her command. 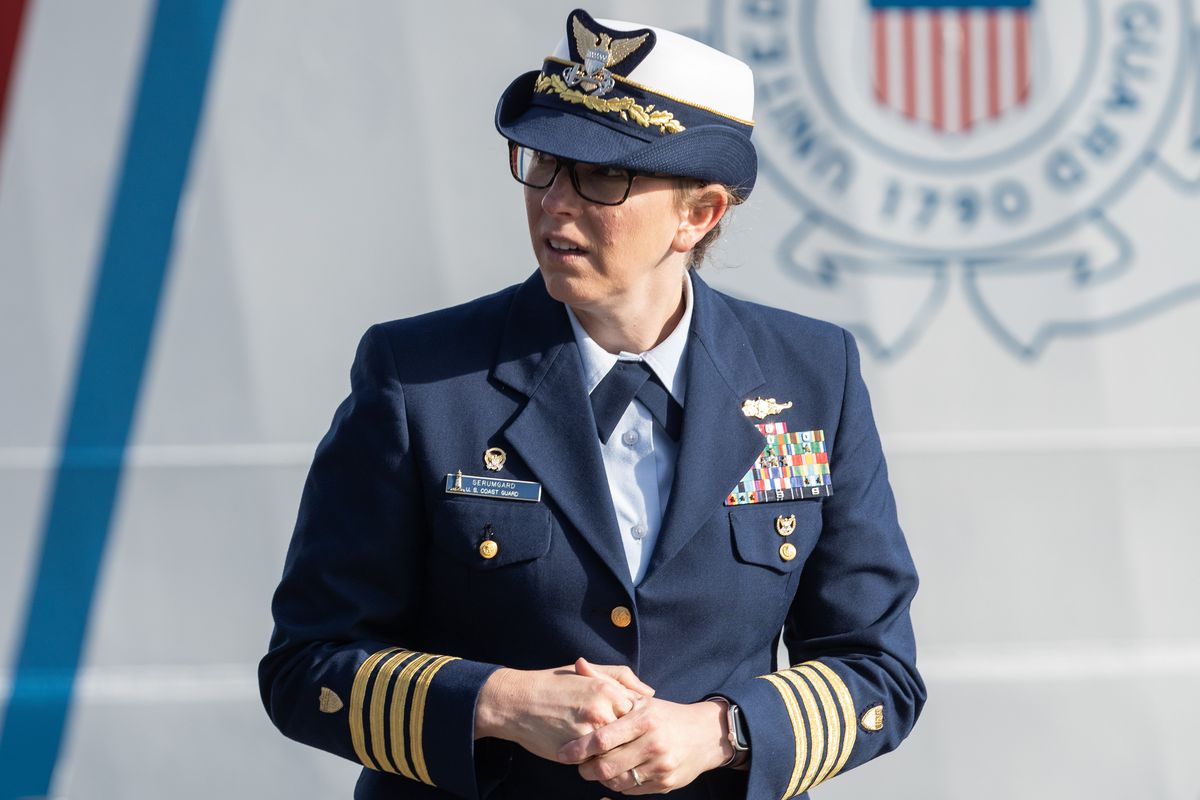 Many crew members spoke of wanting to get deep-dish pizza, while a few more seasoned members said they were planning to head to less touristy destinations, like Rossi’s bar or Bari Subs and Italian Foods.

Geralds, who sported a wide smile as the Mackinaw pulled into Navy Pier, said coming home to Chicago was the best reward.

“That beautiful skyline, there’s nothing like it. Home sweet home, I can’t wait,” Geralds said.

“I’m gonna get me some good eats.” 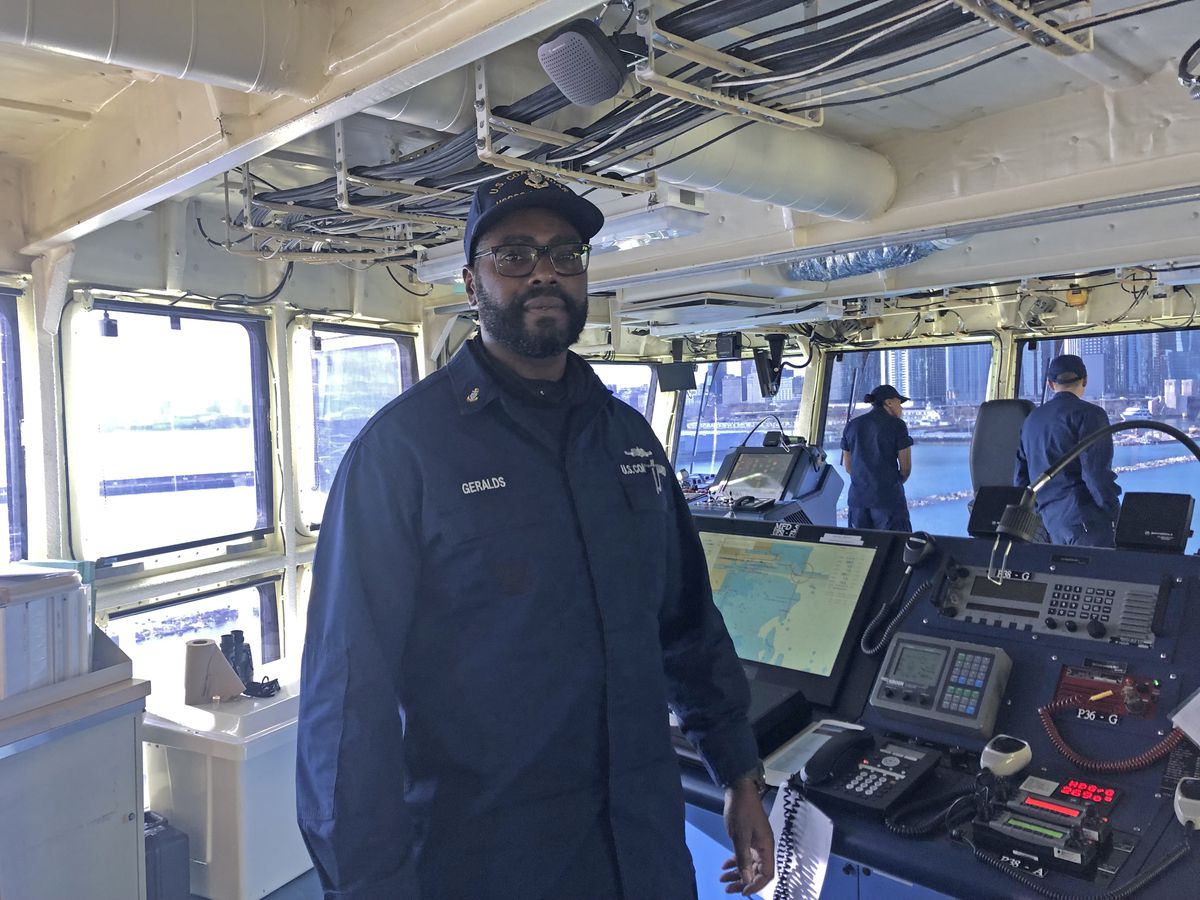 Darnell Geralds, who grew up in Chicago’s Englewood neighborhood, joined the Coast Guard 14 years ago after four years in the Navy. The Mackinaw, he said, is his best Coast Guard assignment ever.