The Mustang Mach-E, Ford’s first purpose-built electric vehicle, combines the moniker and mask of its most iconic sports car with the body of a compact utility vehicle.

Instilling either quality into a Mustang would’ve been enough to give the pony car faithful indigestion, but both at once? Shocking, to say the least.

And that was the point.

The name and face are all about the hype. Many automakers have faltered in their initial electric car efforts with middling economy-minded machines, but time has run out as the transition from burning to buzzing is upon us and Ford knows this needs to be a hit.

Ford CEO Jim Farley had clearly learned from Tesla’s successful strategy of putting performance first when he told the Mach-E team to “think Mustang” a couple of years ago before he announced the model to the world as the Mach 1. 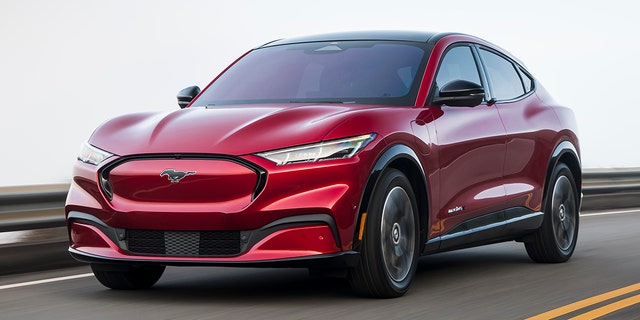 The name has since changed to one that’s more on the nose for an electric automobile, but Farley’s idea has carried through. (Fear not, faithful. Ford will be selling a traditional, V8-powered Mustang Mach 1 alongside it next year, because heritage.)

As for the compact utility vehicle aspect, you just have to look at today’s sales charts to know that an electric coupe wouldn’t cut it. Two-doors are going extinct while small SUVs make up the hottest segment in the industry, and grabbing even a small piece of the pie would be a big get for Ford out of the gate. 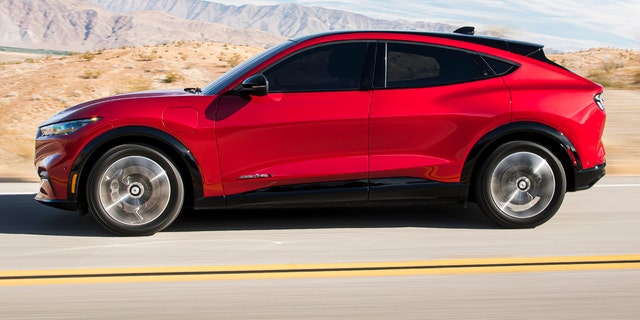 The Mexican-made Mach-E is about the same size as a Ford Escape or Tesla Model Y, which will be its closest competitor among green machines. Prices start at $43,995, but it qualifies for a $7,500 federal tax credit that brings it down to $36,495. That gets you a rear-wheel-drive Mach-E Select with a standard-size battery pack and an unimpressive range of 211 miles per charge, but there are other models available that can go as far as 300 miles for as little as $51,100, or $43,600 after the credit. 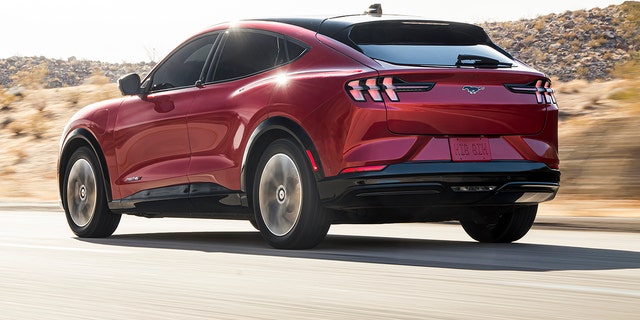 The cheapest Model Y is $51,190 and offers all-wheel-drive, a range of 328 miles per charge and the ability to accelerate to 60 mph in 4.8 seconds. That speed makes it a perfect match for an all-wheel-drive Mach-E Premium equipped with the optional extended-range battery pack, which is rated at 346 hp with 428 lb-ft of torque and starts at $55,800, or $48,300 with the discount. However, its EPA-rated 270-mile range means the Tesla will eventually leave it far behind. 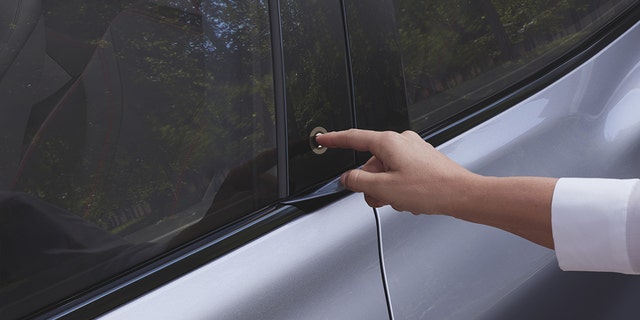 The Mach-E’s behind and sides also have a lot of Mustang style, with the sports car’s signature three-bar taillights and bulging fenders. Aside from the absence of exhaust pipes, there isn’t much that visually gives away its propulsion system, but unique pushbutton door releases lend it a concept car flair. 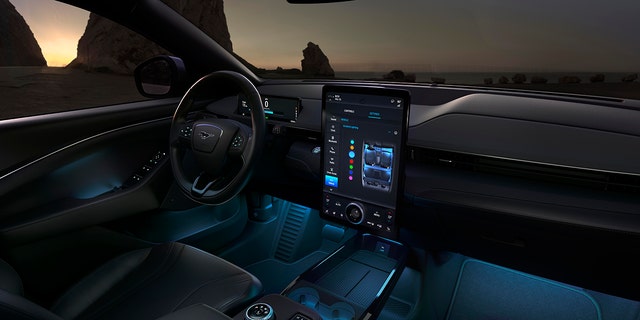 Inside is where the future is more evident. The Mach-E’s centerpiece is a portrait-oriented, 15.5-inch screen with a volume knob floating on it and tablet-quick responsiveness. The gauge cluster is a smaller rectangular display and the dashboard has simple, horizontal lines and a unique mesh trim insert that covers the speakers and the spaces in between them and gives it the look of an old-school home audio system. 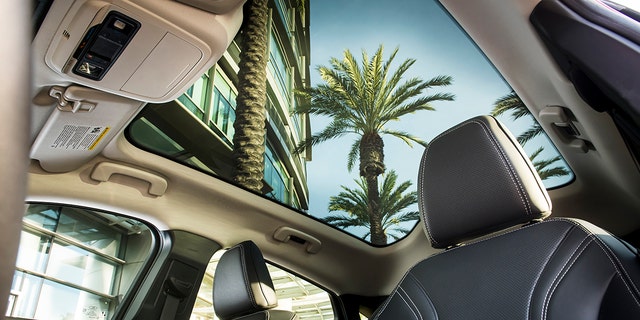 I tested a limited-availability First Edition, which is already sold out but is mechanically identical to the Premium described above and includes a full panoramic glass roof, just like a Model Y has. Exactly how many of these Ford will build remains unclear.

Aside from the leather upholstery, which is very good but not quite as luscious as the Model Y’s synthetic hide, the Mach-E’s cabin quality more than holds its own. It is on the small size for the compact SUV class, but not cramped, although the fastback styling cuts into the trunk space. A 4.8-cubic-foot “frunk” under the hood offers supplemental cargo-carrying capability in the form of a waterproof compartment with a drain plug that Ford has suggested would make a great place to serve shrimp cocktail at a party. 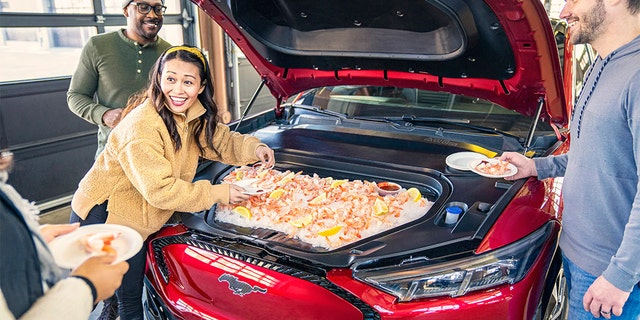 If you’re interested to know out how well it actually works as a seafood server, I’m not sorry to say that I didn’t try it.

The Mach-E is certainly more enjoyable in motion, anyway. It has plenty of kick when you floor the accelerator and cruises around quietly enough for you to notice the wind noise generated by the windshield. Considering it weighs about as much as a three-row Ford Explorer and more than some F-150 configurations, it feels surprisingly fleet and handles well in curves. It’s far from a sports car, but the sport utility vehicle descriptor is apt. My only gripes are the slightly abrupt action of its brake pedal and that there’s too much of a rocking horse sensation when you come to a complete stop. (Our test car was a pre-production example, so it’s possible these tendencies can or have since been tamed.)

At speeds below 20 mph the Mach-E emits a loud hum to alert pedestrians to its presence, but its drivetrain is nearly silent otherwise. If you can’t deal with dead air, Ford provides synthetic engine sounds pegged to each of the drive modes, with the one for the highest performance “Unbridled” programmed to mimic a Mustang’s V8. (Note: you’ll find the “off” switch in the center display.)

All Mach-Es come standard with Ford’s Co-Pilot 360 electronic driver aid package that includes automatic emergency brakes and lane-keeping assist and can be upgraded with adaptive cruise control, self-parking and evasive steering assist, which uses cameras to help guide you past obstacles with a light nudge of the wheel.

It can also be ordered with a prep package that includes the hardware for Ford’s upcoming Active Drive Assist, which uses facial recognition technology, a package of sensors and hyperaccurate maps to allow for hands-free highway driving within a lane as long as you keep your eyes on the road. A software update to activate it will be sent to the Mach-E late next year and more capabilities can be added, but unlike Tesla’s so-called Full Self-Driving feature, Ford is not promising to deliver anything close to true autonomous driving. 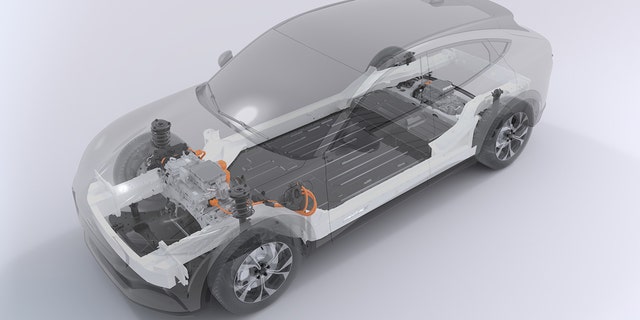 What it has delivered is a very competitive and compelling electric vehicle that can pick up a claimed 61 miles worth of charge in about 10 minutes at a public 150 kW DC fast charging station or fill its battery to 80% in about three-quarters of an hour. Unfortunately, it can still be tough to find one and they don’t always give you maximum power, as I’ve learned testing many electric cars. The best I saw in my days with the Mach-E was just 85 kW, which meant I had to take a longer lunch than planned before heading home.

That’s no fault of Ford’s, and the situation is constantly improving. Electric car owners do most of their charging at home, so it’s only an issue if you’re planning to take your modern Mustang for a ride on the open range.