I Had An Abortion At 25 Weeks, 6 Days. Faced With The Same Horrific Choice, I’d Do It Again.

On Dec. 10, 2020 ― one year ago today ― I lost the most important person in my life. She and I had spent every second of the last six and a half months together. I’d been waiting for her my whole life.

I lay down on an operating table with an IV port in my right forearm; the anesthesiologist poised to put me under.

I placed my left hand over my womb and wept uncontrollably ― loudly enough, I’m sure, that I could be heard by the other pregnant people waiting on the hard plastic chairs that lined that long, socially distanced hallway. I could not control my grief. This was the worst moment of my life. And yet, faced with the same horrific choice, I would do it again.

The days leading up to my abortion were a nightmare.

I was single and 42. I’d always longed to be a mother. I’d been trying to conceive, using donor sperm, for two years. I’d spent dozens of thousands of dollars on six failed IUIs, two rounds of IVF, two failed embryo transfers, two painful miscarriages, and mountains of heartbreak.

As months of infertility had grown into years, my naive excitement turned to cautious optimism, turned to “we’ll see.” So when my last embryo transfer was a success, I was happy but careful not to celebrate. When the 12-week NT scan and NIPT results showed that my baby was low-risk for neural tube defects and chromosomal abnormalities, I was relieved, but I didn’t dare start brainstorming baby names. And after my 20-week anatomy scan showed that my little girl had been developing perfectly, I was overjoyed, but no way in hell would I pose for that classic baby bump shot. Instead, I quietly packed up my 18 years of life in Los Angeles, at the height of the COVD-19 pandemic, and drove to New York, to be with my loving family.

I stayed away from coffee, sushi, unpasteurized milk and cheese, sprouts, cold cuts, phthalates, BPA’s, cat litter, and fish with high levels of mercury. I did prenatal yoga, calming meditations and self-administered progesterone butt injections, every night at 7 p.m. as instructed ― at least 90 of them in total during my pregnancy.

I finally shared my good news on social media at 24 weeks. Everyone had known how badly I’d been trying to have a baby, and it had been a terrible 2020 for us all, so my news was met with overwhelming love and excitement. As my dad said, “She’s like the sun coming up over the horizon.”

And then, at 24 and a half weeks, at a “bonus” ultrasound, the technician called the doctor in. “Your baby’s head is measuring a few weeks too small.”

A cold rush of fear coursed through my body. My heart raced and my legs began to shake. Chill. Breathe. This could be nothing. Don’t feel. Don’t jump to conclusions. Wait for more information.

The author at 22 weeks pregnant. “Finally starting to show,” she writes.

And wait I did. My fetal MRI couldn’t be scheduled for seven excruciating days. I tried to numb myself … to block out the fear, the denial, and the wishful thinking, too … knowing that “thinking positive” had never worked for me in the past. I spoke to my little girl. Told her how much I loved her, and how much joy she’d brought me. Told her we were going to be OK.

But the fetal MRI would confirm the worst. Multiple severe brain abnormalities. Severe microencephaly, lissencephaly, ventriculomegaly, and a piece of her temporal lobe was missing. Her prognosis? Severe cognitive, motor and sensory impairment. Would she be able to run? Walk? Talk? Eat without aspirating? The doctor couldn’t tell me for sure. But no, probably not.

The diagnosis was unequivocal. And for a moment, I was thankful for the severity because, selfishly, it made my decision clear and my resolve sharp. There was no doubt in my mind that I needed to terminate my pregnancy so that my precious daughter’s soul would not be trapped in a body that would cause her a lifetime of pain; so that she could go on to live in a body that could play and laugh and swallow and breathe. A body that would live past her 10th birthday.

I would have an abortion…

An abortion at 25 weeks and six days gestation isn’t simple. It’s a multi-day process. A D&E, or dilation and evacuation. On day one: Inject the fetus with KCL, which stops the heart, then begin the process of dilating the cervix. On day two, three or four (depending on how dilated the cervix becomes): Evacuate the fetus from the uterus.

And it needed to be done immediately, because I could not find any doctors in New York that would do the procedure in my third trimester, which was just two days away. If I missed my window, I would need to fly to Maryland or Colorado for the procedure. Deep down, I feared I would not be allowed to have the abortion at all.

So, on that operating table ― day one ― tears still rolling down my cheeks and soaking my hair, they put me under and inserted a long needle through my abdomen and into her heart. Her soul was free to go. Her body, though, would remain inside of me another day.

I went home and spent the next 24 hours with her lifeless body inside of my lifeless body. I could no longer feel the kicks that had made me so happy that last month. In the mirror, I saw the tell-tale bulge where her little body still lay, my linea nigra leading down to a drab Band-Aid where they’d made the fateful injection.

The next morning, I made my way back to the abortion clinic. It was time to go back under. I didn’t cry this time. The sooner this was over, the sooner I could go home and mourn.

Instead, I woke up in an ambulance taking me from the abortion clinic to the hospital. I was hemorrhaging to death, and I needed blood. My body was going into shock.

Terrified, alone and isolated, double-masked in the pre-vaccine pandemic, I could feel the blood gush from my vagina every time the nurses and doctors pressed on my abdomen. I begged them to save my uterus … and if they couldn’t, to save my ovaries. They put me under again, gave me two units of blood, stitched a laceration in my cervix, inserted a balloon into my uterus to stop the bleeding, and packed me with 16 feet of gauze. I’d get two more units of blood later that night, and would spend the next 24 hours in the surgical ICU. 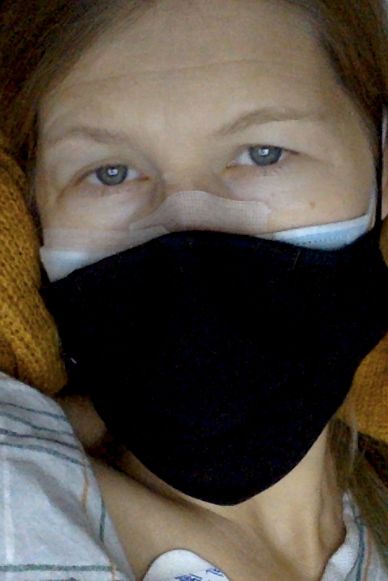 The author “alone, scared and heartbroken” in the ICU recovering from severe hemorrhaging.

The loss of my daughter, the fact that I, alone, was responsible for her death, the physical trauma ― these were all things I had to go through to save my girl from a life of suffering. But the suffering I experienced because abortion is politicized and stigmatized? That was unnecessary.

When I discovered that I needed an abortion, not a single medical professional on my team knew where to send me or how to make the process less excruciating. Though they tried! But the systems just weren’t in place. I should have been educated about my options. D&E wasn’t the only option. I could have had the injection and then labored and delivered in a hospital (an L&D). Would this have been safer? I don’t know. But I wish I’d had the option.

I should have been given resources (support groups, abortion funds, abortion doulas, lactation consultants for the milk that would come in after my abortion). I should have had time to say goodbye, but instead I had to navigate abortion politics. Less than 48 hours from my baby’s diagnosis, I was thrust into a procedure I wasn’t prepared for, that could have killed me.

And yet here we are, on the anniversary of my abortion, six conservative Supreme Court justices poised to overturn Roe v. Wade. Last week, Mississippi Solicitor General Scott Stewart argued in Dobbs v. Mississippi that a fetus recoils at 15 weeks when poked [with a needle]. But I wonder how many times my poor daughter would have had to recoil as she endured countless painful procedures and surgeries ― had I been forced to carry her to term. And I wonder what Mr. Stewart would have done in my shoes.

I’m lucky to be surrounded by loving people who believe that the pregnant person is the only person who can make the right decision for their body and their baby. I have nothing but love and respect for those of you who have chosen and will choose to carry pregnancies with severe medical complications to term, and I hope this piece does not bring you pain. My heart is with you. You, too, made the right decision for yourself, your baby and your family.

And through the “Ending A Wanted Pregnancy” support group, I’ve discovered thousands of other people like me, who have had to TFMR (terminate for medical reasons). Sadly, there are so many people around the country that don’t feel safe sharing their stories openly. Instead, they must grieve in silence and obfuscate the truth. “We lost the baby.” “The baby didn’t make it.” But rarely, “I had an abortion.”

Politics have stigmatized the word. Made it evil when it’s compassionate. Rare, when it’s actually common (three times as common as stillbirth, I’ve read). Elective, when it’s a medical necessity. A frivolous choice when it’s the hardest decision anyone is ever faced with. It is, after all, a matter of life and death. In my daughter’s case, I chose life.

I gave her the best life possible.

Molly Hawkey is an actor/writer/podcaster/editor. She’s known for her out-of-the-box creations … from editing herself into Oscar Roundtables and a full season of “The Bachelor,” to her podcast SpermCast that sent her on a quest for a sperm donor, but captured her entire experience with infertility, pregnancy and loss. You can find Molly on Instagram and Twitter at @mollyhawkey and @spermcast.

Do you have a compelling personal story you’d like to see published on HuffPost? Find out what we’re looking for here and send us a pitch.