Coronavirus thriller ‘Songbird’ was filmed during the COVID pandemic. How, and why, they did it

On March 14, filmmaker Adam Mason, like virtually everyone else in Hollywood and across the planet Earth, was freaking out.

With the worsening coronavirus crisis triggering lockdowns and blaring headlines around the country, a passion project Mason was set to direct for Blumhouse Pictures had shut down just five days into pre-production. He was worried about his wife and three young children, with whom he shares a two-bedroom duplex in L.A., and about his aging parents living 5,000 miles away in his native England. Having directed a string of low-budget horror films and thrillers with titles like “The Devil’s Chair,” “Blood River” and “They Come Knocking,” the 45-year-old Mason was now coming face-to-face with true fear.

Then his phone rang. “My writing partner Simon Boyes called me up, sounding unexpectedly excited,” Mason says. “He and I came out of this very guerrilla filmmaking world back in England. He said, ‘What’s happening is terrible, but we should just get together and make a movie like we did in the old days.’ ”

At that point, Mason never could have imagined that, just nine months later, the film born of that phone call, the dystopian pandemic sci-fi thriller “Songbird,” would be heading toward its PVOD release this Friday, with Michael Bay on board as a producer and a cast including Bradley Whitford, Demi Moore, Craig Robinson and “Riverdale” star KJ Apa. Then again, there’s been a whole lot about the nine months that no one ever could have imagined.

The first major feature film to be made during the pandemic in Los Angeles, “Songbird” is set in 2023, with the world under siege from a coronavirus that has gone through several increasingly deadly mutations and the infected forced into oppressive quarantine camps known as Q-Zones. In this bleak and blighted landscape, an L.A. courier named Nico (Apa), who is immune to the disease, attempts to find a way out of the nightmare with his girlfriend, Sara (Sofia Carson), who has been trapped for years in lockdown. Think “Romeo and Juliet” with hazmat suits.

When the trailer for “Songbird” was released in late October, reaction on social media was swift and, perhaps not surprisingly, deeply skeptical. With the country heading into a deadly winter, many lambasted the notion of a dystopian coronavirus thriller as tone deaf and in poor taste. That the trailer came bearing the imprimatur of Bay, who is known more for slam-bang, testosterone-fueled action than for nuance, probably didn’t help.

Mason was surprised by the blowback. In his mind, he had set out to make a movie that could be cathartic for audiences and give them a measure of optimism in dark times, not some exploitative COVID-themed shock-fest.

“This is by far the sweetest and most good-natured film I’ve made,” Mason says. “I spent my 30s trying to be controversial, and I feel like I kind of achieved it accidentally with this film. I fed my own fears and hopes for humanity into ‘Songbird.’ So whilst [the negative reaction] is something I completely understand, I think the film speaks for itself in terms of being a very hopeful and positive piece of work.”

Mason and Boyes hadn’t initially planned to make a coronavirus thriller at all. In their original conception, which they hastily fleshed out in a 12-page treatment, the film was to be a kind of found-footage creature feature à la “Cloverfield.” “The idea was a monster movie set during a lockdown where people thought they were locked down for a pandemic and then they realize it was actually a monster,” says Mason. “I was trying to use the monster as a metaphor for the virus.”

With film production at a standstill, Mason planned to make the movie on a shoestring budget with some actor friends using iPhones and laptops; it would serve as much as a distraction and a way to stay busy as anything else. With little expectation but nothing to lose, he decided to send the idea to producer Adam Goodman, a former president of Paramount Pictures who has been looking for innovative ways to make smaller-budget projects through his production company Invisible Narratives.

Goodman told Mason he was prepared to greenlight the movie but that he and Boyes should scrap the rampaging-monster idea for something more immediate and timely. “Adam said, ‘Listen, there’s nothing more scary for any of us than what’s really out there at the moment,’ ” says Mason.

“I think part of why I responded so favorably to it was that it felt purpose-built in the sense that it actually felt make-able,” says Goodman, who soon brought on Bay, with whom he had a relationship from his days at Paramount, and who has produced similarly budgeted thrillers like “The Purge” and “A Quiet Place.” “We debated if it was something that could be done safely and that made sense, and ultimately we felt that as filmmakers and storytellers we had a duty to document dangerous times in our history. We noted what audiences were flocking to as the lockdown was first taking place and discussed this idea that films like ‘Contagion’ and ‘Outbreak’ help people address our fears and our hopes.”

Mason quickly set about writing a full-fledged script with Boyes, consulting with a number of scientists and even a futurist for a sense of how the pandemic might unfold in a worst-case scenario. “It was a surreal experience,” Mason says. “I was holed up in the bedroom writing a scene where there were helicopters overhead telling our protagonist to get inside because there was a curfew, and literally as I was writing that a helicopter flew over the house announcing the curfew in L.A.”

In the midst of a pandemic that was wreaking havoc on business-as-usual in Hollywood, wanting to make the film and actually making it were very different things. In consultation with unions and public health officials, the “Songbird” team soon settled on a stringent series of protocols for safely going into production. In early July, with cast members still coming on board up to the last minute, a bare-bones crew and a script that was continually being rejiggered, they started the 17-day shoot at various locations around Los Angeles.

“There was none of the usual circus that comes along with a production,” Mason says. “Most of the time, there were only four people on the set, all of whom had tested negative, and apart from the actor who was being filmed everyone would be wearing PPE. It was almost like being in surgery or something. I told my wife I felt safer on set than I ever do going to the supermarket.”

Carson, who was officially cast just one day before she showed up on set, says she always felt protected. Going in, everyone had agreed to quarantine when they weren’t working. Each day, the set was sanitized before the actors stepped onto it, with props placed in vacuum-sealed bags. In the end, of the 100 or so people who were involved in the production, none ever tested positive.

“The set and the crew were so minimal, it was almost like we were shooting live theater,” Carson says. “Most of my scenes with KJ, we were separated by a door, or we were communicating through FaceTime. So even though we were on set together, we had distance. And in terms of being method, it also worked for us as actors. The more distance we had between us, the more real it felt on camera.” 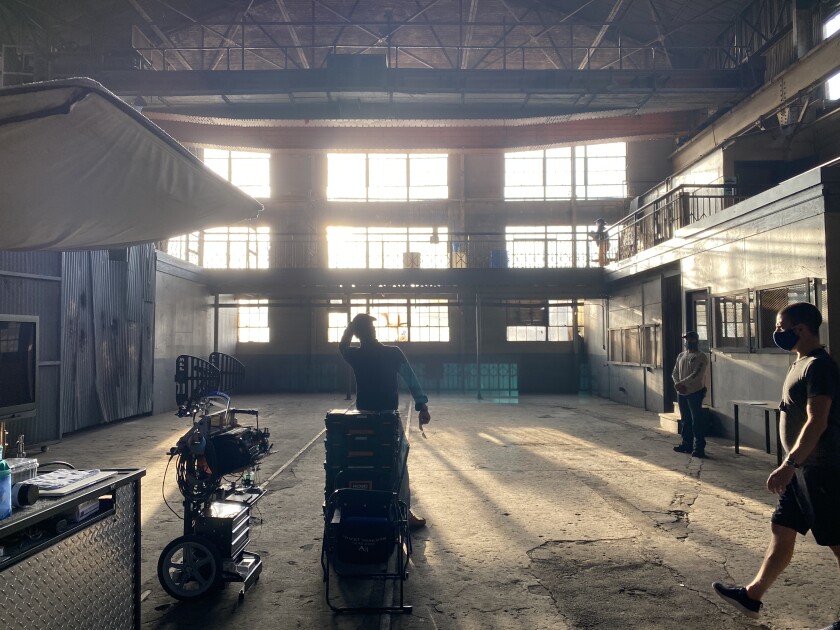 The set of “Songbird,” a thriller set during the pandemic, and shot in Los Angeles in July, 2020.

Though the film’s budget was just a fraction of what was spent on, say, one of his “Transformers” movies, Bay stepped in during post-production to help Mason amp up its look and feel. “Michael has an incredible eye for rhythm, energy, style and storytelling,” says Goodman. “He was able to really push the boundaries on what could be done and how fast it could be done and helped make a much bigger, more robust production than what any of us really imagined when we were first starting to talk about this.”

Still, slick production values or no, the central question remains: Is the world really ready for a coronavirus thriller? With the pandemic now entering its most dangerous phase so far and more than 2,000 Americans dying of COVID-19 every day, it remains to be seen whether audiences will be receptive to a piece of Hollywood entertainment that plays off the same real-life horrors they are seeing every day on the news.

Although some might argue it’s too soon, Goodman believes the moment is right for the film. “We’re living in a scary time, and the reason the movie is sparking conversation is because it resonates with what we’re experiencing today,” he says. “The reason why the movie is called ‘Songbird’ is it’s about hope. It’s about resilience. It’s about the strength of the human spirit.”

Mason is simply proud that the movie exists at all and that, whatever happens, it will serve as a kind of time capsule of this strange and frightening period.

“This was a huge effort for so many people, and I think it was brave of everyone to be a part of it, just to keep working,” he says. “I’ve been here in L.A. for 14 years, and it’s hard not to become jaded over time. But the experience of making ‘Songbird’ took me back to being in film school and that sense of adventure I used to feel in my teens and early 20s about filmmaking. I think we all felt that.”