Best Penny Stocks To Buy? 5 To Watch With Potential Catalysts This Week

It’s the weekend, and we’re nearing the end of the year. But that doesn’t mean the stock market closes anytime soon. December is always an interesting time for traders. Some are looking to cut some heavy bags and harvest the tax loss. Meanwhile, others are running full steam into year-end and on the hunt for the next round of multi-bagger penny stocks to buy.

The Top 3 Stocks to Buy in February

For those in the latter of the two camps, volatility and catalysts are probably a big part of your research this month. Thanks to some kind of event, I can’t tell you how many small-cap stocks have exploded in a matter of hours. December has been action-packed, whether it’s news, SEC filings, company Tweets, or speculative buying based on rumors. This week is probably no different, and in today’s article, we look at five penny stocks to watch with potential catalysts before the end of the year.

Penny Stocks To Watch This Week

Before we get into this list of penny stocks, I need you to understand something. While many of these companies have upcoming events that’ve been pre-announced, that doesn’t automatically make them a Buy. There are plenty of times when companies present data or have upcoming news where a sell-off can get triggered. However, heading into the week, knowing what to look for and why is the first step in making a sound watch list.

Alzamend develops treatments for neurodegenerative diseases and psychiatric disorders. It has created a robust pipeline of candidates with therapeutic candidates, AL001 and AL002. With AL001, Alzamend’s early studies have shown promise in improved memory and associative learning, which has supported continued progress as a potential Alzheimer’s disease treatment.

AL002, on the other hand, is a patented method for restoring the immunological system of a patient to combat Alzheimer’s. With a 1-2 punch in one of the popular niches of the biotech industry this year, ALZN stock has periodically gained some attention. Overall, however, things have been quiet for much of the 4th quarter.

What To Watch With ALZN Stock This Week

Alzamend is one of the few names on this list of penny stocks without a firm date of action. However, based on an old PR, we have some idea of the timing of a potential catalyst. In its November 30th update, the company said that it received confirmation that topline data from a Phase 1 trial of AL001 for dementia related to Alzheimer’s would be delivered “mid- to late-December” 2021.

Stephan Jackman, Chief Executive Officer of Alzamend, also hinted that “We believe these data will confirm AL001’s potential as a replacement of the current lithium-based treatments and may provide a treatment to the over 40 million Americans suffering from Alzheimer’s and other neurodegenerative diseases and psychiatric disorders. We look forward to utilizing these data to move swiftly into a Phase 2 multiple ascending dose study involving Alzheimer’s patients in the first quarter of 2022.”

Furthering the speculation on ALZN stock is insider activity. A 10% owner and popular founder of Ault Global Holdings Inc. (NYSE: DPW), Milton Ault III purchased over 20,000 shares of ALZN stock at the beginning of December. The roughly $45,000 buy added to his growing position in Alzamend, which included another recent investment at the end of November to the tune of just under 20,000 shares. See more ALZN stock filings here. 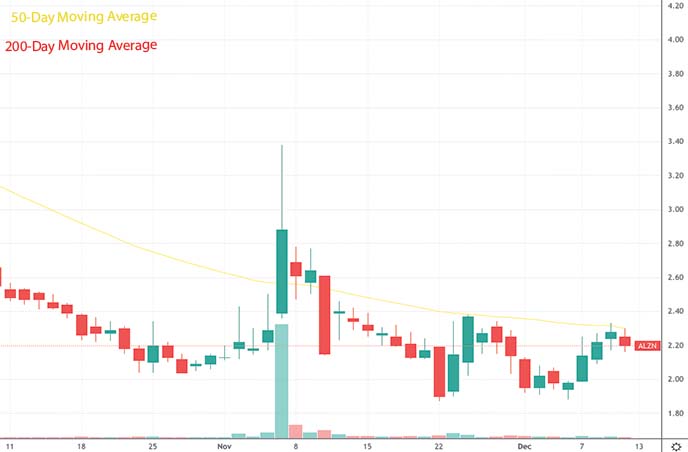 X4 is heading into the second half of December, looking for some recovery. This year has been a tough one for the company, and its stock as shares slipped from over $10 to under $4. Missed earnings, discounted offerings, and slower progress seem to have been the negative catalysts throughout 2021. Will that turn around before 2022? That’s the question on anyone’s mind with XFOR stock on their list right now.

The company develops therapies for diseases involving the dysfunction of the CXCR4 pathway. These include primary immunodeficiencies and certain types of cancer, according to X4. Its lead candidate, mavorixafor, has already shown potential in a Phase 2 trial in people with WHIM syndrome. There’s also a global Phase 3 clinical trial in WHIM and two Phase 1b clinical trials – one as monotherapy in people with Severe Congenital Neutropenia and other chronic neutropenia conditions. The other is in combination with ibrutinib in people with Waldenström’s macroglobulinemia.

What To Watch With XFOR Stock This Week

There are a few things to keep tabs on this week regarding XFOR stock. First, the company will summarize data from 7 abstracts submitted and accepted for the American Society of Hematology (ASH) Meeting. This goes on from December 11th-14th. The majority of its presentations happen on the 11th and 12th.

You’ve also got December 16th to keep in mind. This is when X4 hosts a virtual seminar, “Understanding Primary Immunodeficiencies.” The presentation begins before the opening bell on Thursday. 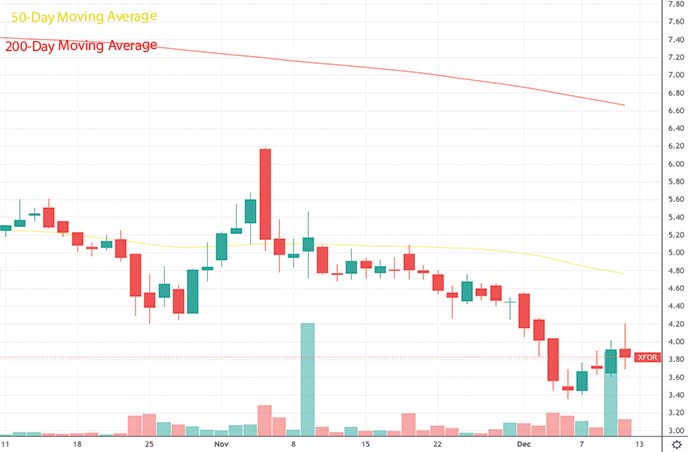 Whenever you see Mustang Bio mentioned, the chances are that Fortress Biotech (NASDAQ: FBIO) won’t be far behind. That’s because Fortress founded Mustang. Little fun facts may or may not be helpful to you, but they don’t hurt knowing, in my opinion. Regardless, Mustang could be in focus this week ahead of key events. The company develops cell and gene therapies for hematologic cancers. Its candidates have also targeted solid tumors and certain genetic diseases.

Its MB-106 platform could be the topic of conversation this week. This is Mustang’s treatment candidate for B-cell non-Hodgkin lymphoma (NHL). In previous studies, MB-106 showed a favorable safety profile as outpatient therapy. Furthermore, in patients with follicular lymphoma, the overall response rate was 92%, with the complete response rate coming in at 75%, according to the company. MB-106 was given a National Cancer Institute 2-year grant to support ongoing development.

What To Watch With MBIO Stock This Week

This week is all about MB-106. Mustang’s data was selected for presentation at the ASH conference. In addition, the company hosts a key opinion leader webinar on December 16th where Dr. Mazyar Shadman of Fred Hutchinson Cancer Research Center will discuss interim results from the ongoing Phase 1/2 clinical trial investigating the safety and efficacy of MB-106 for NHL and chronic lymphocytic leukemia. 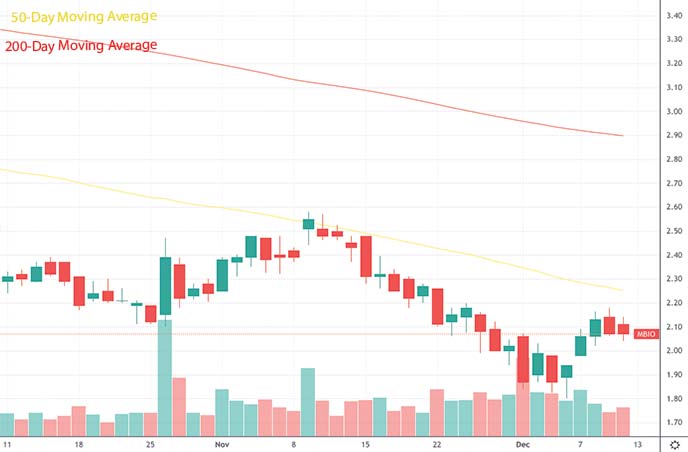 The late-stage biotech company Cellectar Biosciences has also focused on developing cancer treatment candidates. Its iopofosine I-131 (CLR 131) is in ongoing Phase 2 CLOVER-1 for treating patients with multiple myeloma (MM). However, CLR 131 has also been studied for other indications. These include relapsed/refractory (r/r) Waldenstrom’s macroglobulinemia (WM); there’s also a CLOVER-2 Phase 1 study on the candidate in treating pediatric cancers.

– 3 Hot Penny Stocks For Your Watchlist Next Week

With a laundry list of designations, CLR 131 has no shortage of indications to keep track of. But what will this week bring?

What To Watch With CLRB Stock This Week

Once again, we’ve got a company that has a potential catalyst dealing with the ASH conference. This week Cellectar presents data from its Phase 2 CLOVER-1 study of CLR 131. Something to note is that this presentation was over the weekend. So we’ll see if or how the market reacts come Monday morning. 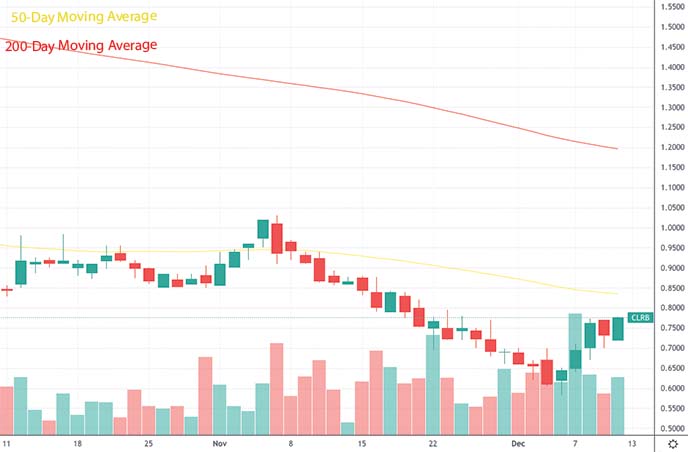 Rounding out this list of penny stocks is ReShape Lifesciences. The last week of trading action has seen RSLS stock bounce back from 52-week lows of $1.61 to over $2 as of Friday. The company has been in and out of the spotlight as it enters into the commercial stages of its Lap-Band product designed to treat obesity.

At the beginning of October, ReShape announced the launch of a multi-platform ad campaign to market the product and highlight the additional support offered via the company’s virtual health platform, reshapecare. In its third-quarter update, the company also made mention that it has also rolled out supplements on its ReShape Marketplace to offer nutritional options in addition to its medical device portfolio. This helped bring momentum to the company as it managed to achieve 9-month and quarterly revenue growth over the same periods in 2020. In particular, 9-month growth came in just shy of 30%.

“Subsequent to all the major milestones we completed in the second quarter of this year, our entire organization focused on executing strategic initiatives this past quarter that create awareness and demand for our commercial portfolio of FDA approved and insurance reimbursed products to further develop a financially strengthened foundation for our business.”

What To Watch With RSLS Stock This Week

No, ReShape won’t be at the ASH conference this week. However, management will participate in Virtual Investor Conference’s Life Science event on Thursday. CEO Bart Bandy and CFO Tom Stankovich will present starting at 2 PM ET on December 16th. 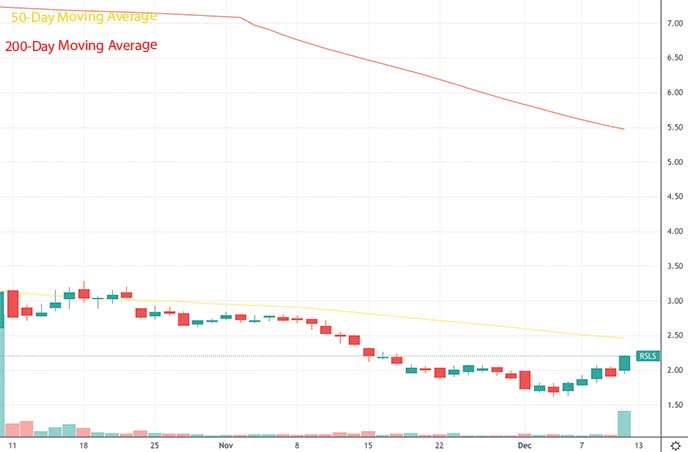 Penny Stocks To Buy [Or Avoid] This Week

A lot is going on this week. Whether it’s industry conferences, investor presentations, or pending data read-outs, this could be a busy week for penny stocks, in general. These are only a handful of names with pending updates and potential catalysts. All the same, knowing what could be coming can help you to understand specific trends in the stock market better. Comment below. Will any of these be on your list of penny stocks to watch this week?

Penny Stocks To Watch This Week

If you enjoyed this article and you’re interested in learning how to trade so you can have the best chance to profit consistently then you need to checkout this YouTube channel. CLICK HERE RIGHT NOW!