Hundreds of people poured into the Rockefeller Memorial Chapel at the University of Chicago on Sunday to celebrate the “life of jazz and social justice” of the late historian Timuel Black.

Back to school with omicron | News

“Tim truly loved his life. It was a great life,” his wife, Zenobia Johnson-Black, told the crowd. “He would often say ‘I done the best I could. We couldn’t accomplish everything — there is still so much to do.’”

Johnson-Black said her husband was at peace with himself near the end of his life, because he had “lived up to his own standards” and had faith that a new crop of young civil rights leaders would sprout to continue the fight for equality.

A funeral service had been held in October for Black, 102, who died Oct. 13. He had fought most of his life for labor, political and civil rights working alongside other leaders such as Paul Robeson, W.E.B. DuBois, Martin Luther King Jr. and President Barack Obama.

The three-hour public memorial opened with a traditional African ancestor salute, with African drums and dance. More than two dozen people shared stories about the incredible impact Black had on them and Chicago at large. There also were several live performances of jazz, which Black loved.

An ensemble plays during the recessional at Sunday’s memorial service for Timuel Black. The service was at the University of Chicago’s Rockefeller Memorial Chapel in Hyde Park.

“Most of us could only hope to witness a century on this earth. Timuel Black shaped his century,” Pritzker said.

“He took on corporations fighting to ensure Black voices were loud and proud in the labor movements of the 20th century. He took on the state of Illinois to protect the right to vote for all people,” the governor said. “By insisting that he was better than no one, he became the very best of us.” 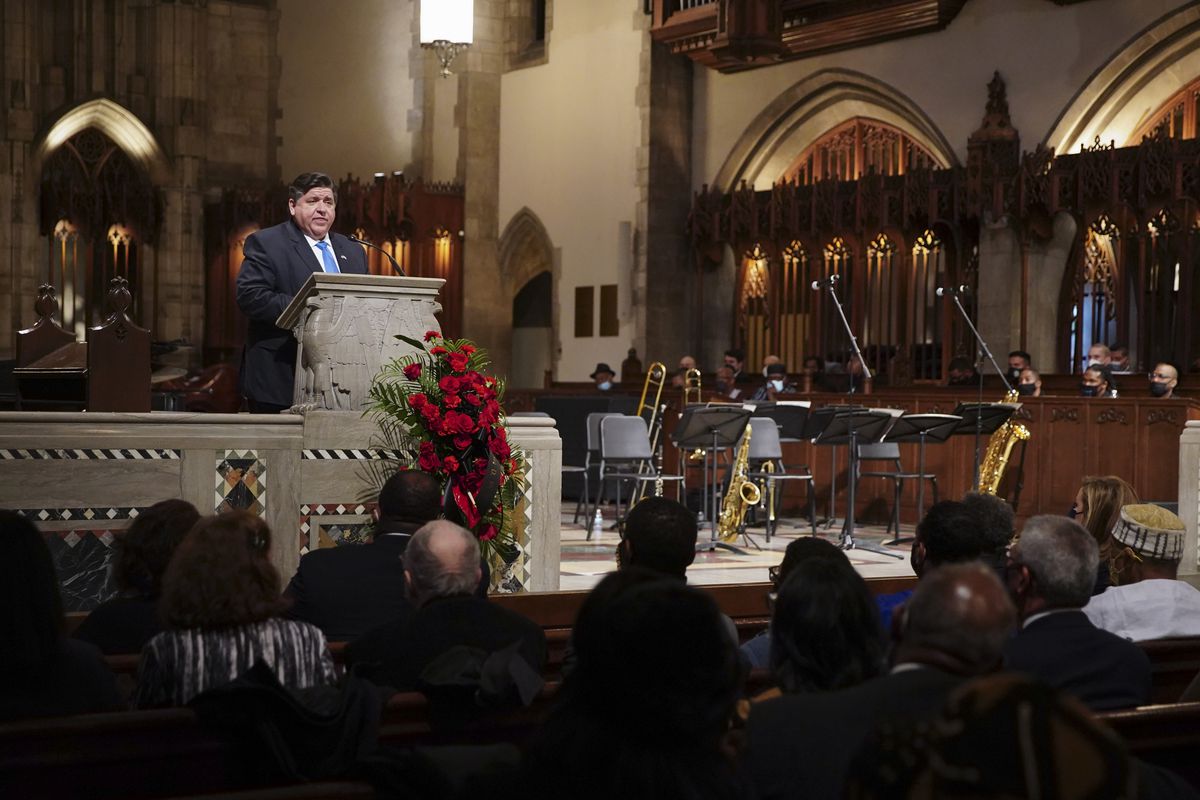 Gov. J.B. Pritzker speaks during a memorial service for Timuel Black on Sunday at the University of Chicago’s Rockefeller Memorial Chapel in Hyde Park.

Mayor Lori Lightfoot called Black a “freedom fighter without parallel” in Chicago’s history and said that to her, as he was to many others, Black was a teacher.

“Tim was a son of our city and he was a gift to our city, our state and our country,” Lightfoot said. 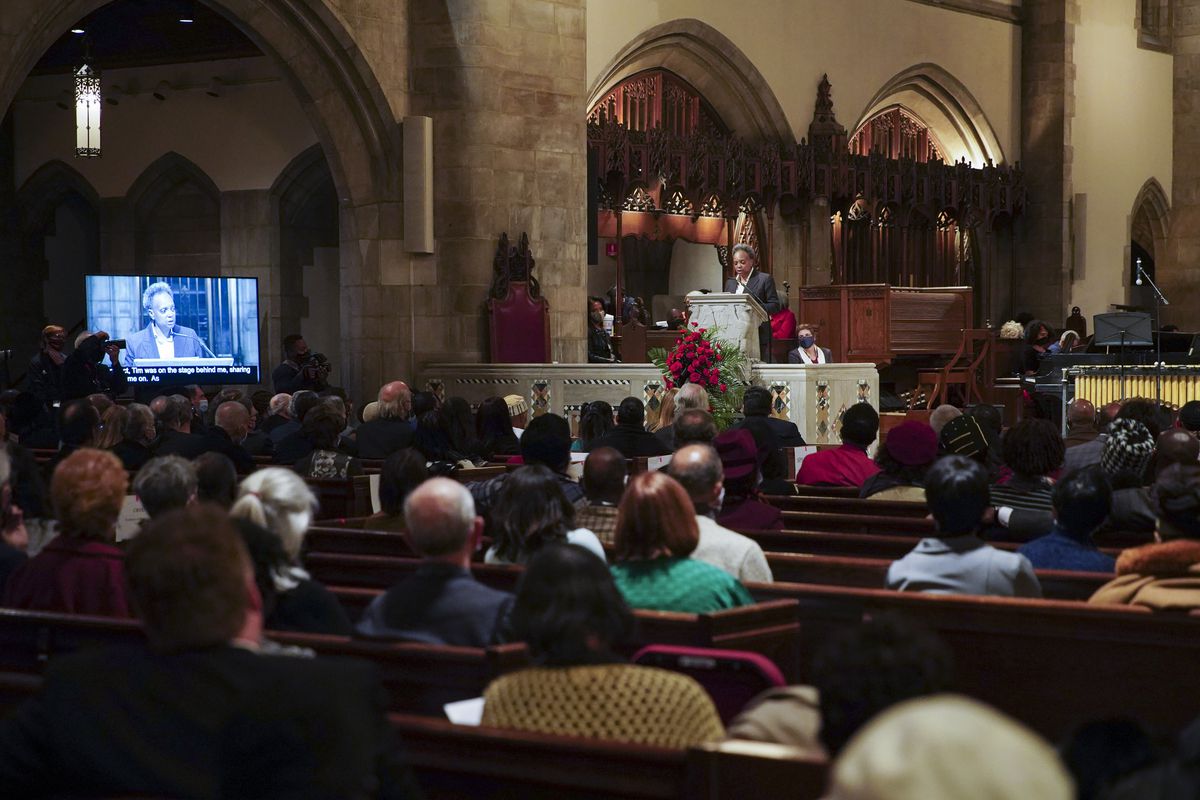 Chicago Mayor Lori Lightfoot speaks during a memorial service for Timuel Black on Sunday at the University of Chicago’s Rockefeller Memorial Chapel in Hyde Park.

“As a Black person in this world, most of us know that we can recite by name the giants on whose shoulders we stand. Whether they are moms or dads, grandparents, siblings, teachers, pastors or others, we know that as Black folks we never pass through this world alone — someone sacrificed in order for us to fulfill our God-given talent,” the mayor said.

“Timuel Black was such a person for me.”

Throughout the service, Black was remembered as always engaged and willing to share his wealth of knowledge with anyone seeking it.

Brandon had moved to Indiana from Chicago in 2018. African American history was not being taught in his new school, he said. He wanted to change that, so he went to see Black.

“Before entering Mr. Black’s home, I thought how I’m going to interview a person who is nearly a centenarian, is a lifelong learner and educator, a veteran, was an activist at the beginning of the civil rights era, knew my great-grandfather and so much more,” Walker said. “I felt proud to meet him.” 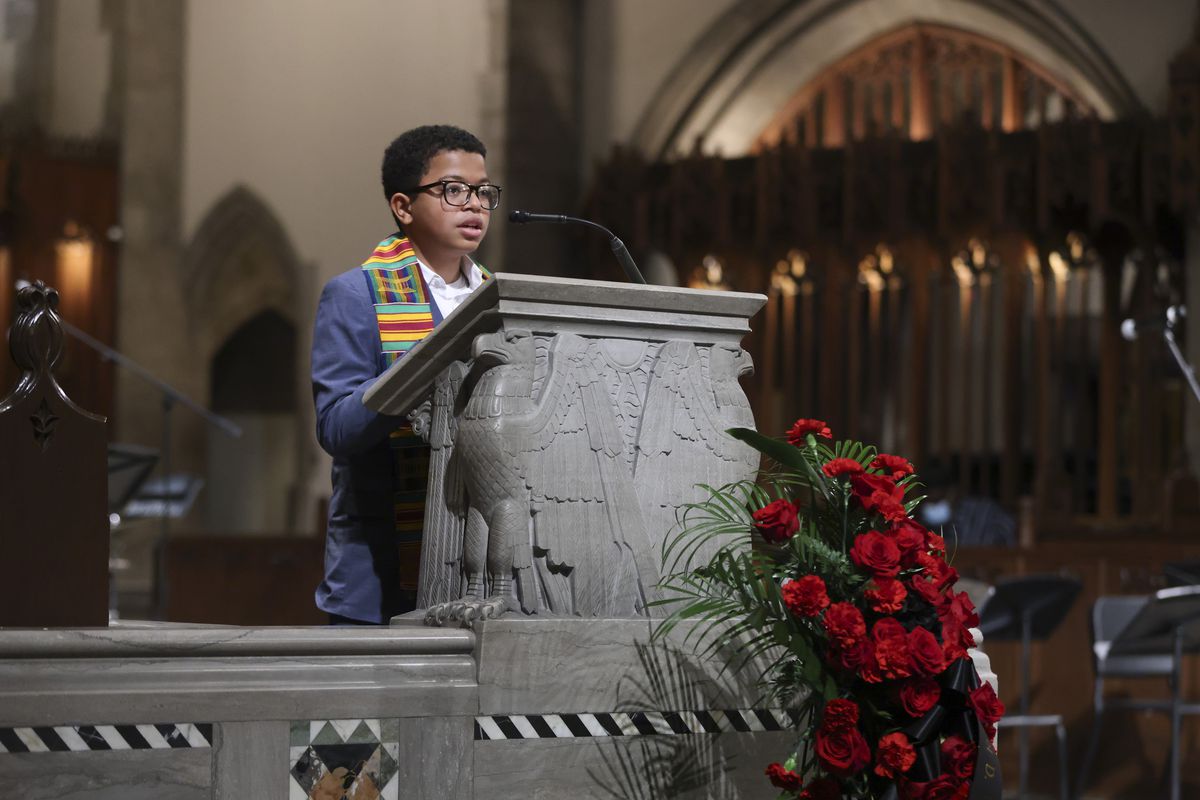 Brandon Walker, an 8th grader from Munster, Ind., got to meet Timuel Black and spoke about that experience at Sunday’s memorial service for Black, an educator, historian and civil rights activist, who died in October.

Walker said Black hammered home his belief that change was coming and that it was important for young people like Brandon to believe that the future will be better for them — and they needed to be prepared for it.

“Mr. Black spoke to me about it not being enough to advance just myself and that I have a duty to advance others who may not have my same advantages,” Walker said. “He said, ‘The door is going to open, and be prepared to walk in — but keep the door open so others can come in, too.’” 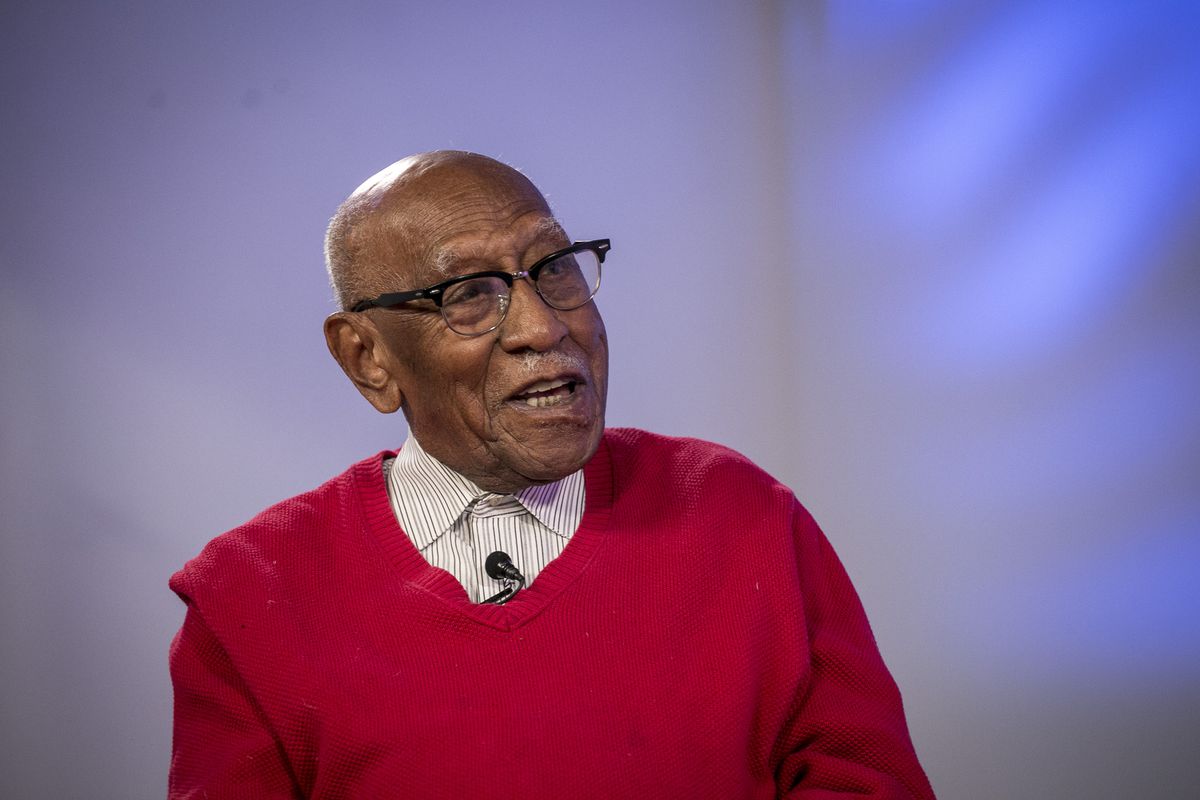 The life of educator, historian and civil rights activist Timuel Black, shown here in a 2018 interview with the Chicago Sun-Times, was celebrated at a memorial service on Sunday at the University of Chicago.