A high school in New Jersey is under increased police presence following a student’s arrest for making a threat on social media just hours following the tragic high school shooting in Michigan on Tuesday.

L.A. Affairs: This romance was a train ride to nowhere

Column: I just spent 45 minutes on hold, and here’s what I thought of the music they blared at me

“This evening I was notified of a post on SnapChat. I immediately contacted Principal Braverman. Shortly thereafter I was notified by my road supervisor that they too received the same report from the community.  Within an hour, the student was arrested.  He was found to be in possession of an AirSoft rifle. The same one depicted in the photo.  Although not a real firearm it certainly is identical to an actual rifle,” Howell Township Police Chief Andrew Kudrick said in a statement posted to his department’s Facebook page late Tuesday.

WHAT WE KNOW ABOUT THE MICHIGAN HIGH SCHOOL SHOOTING

The unidentified student had posted a photo of the AirSoft rifle on SnapChat Tuesday with the caption, “don’t pu tomorrow.”

Howell Township Police told Fox News Wednesday morning that the juvenile was charged with False Public Alarm and Possession of an Imitation Firearm.

This evening I was notified of a post on SnapChat. I immediately contacted Principal Braverman. Shortly thereafter I was notified by my road supervisor that they too received the same report from the community. Within an hour, the student was arrested. He was found to be in possession of an AirSoft rifle
(Howell Township Police Department)

“This was a poor decision by this juvenile.  Although no credible threat of violence is assumed, we will have an increased police presence at the high school tomorrow,” Kudrick added.

Howell is located about 64 miles outside of New York City, near the Jersey Shore.

Howell High School Principal Jeremy Braverman said that the student will not be attending the school for the immediate future. Braverman added that he will remain in close communication with Kudrick on the matter.

“We had extra patrols at the high school this morning to quell any parent’s concerns, however there was no credible threat for violence,” the police department said in a comment to Fox News.

The incident came just hours after tragedy unfolded in Oxford, Michigan, where three students were killed and eight others were injured during a school shooting Tuesday afternoon. 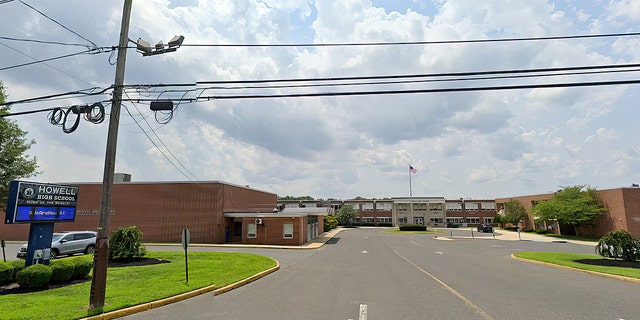 “I just left Oxford high school after a detailed walk-through and examination of the scene and evidence. As I reflect on the day, it is one that is filled with overwhelming sadness. My heart aches for families that will never be the same and a quiet sweet community that had its innocence shattered. I have seen far too many bodies and death in my career, but children’s are always the worst,” Oakland County Sheriff Michael Bouchard said in a statement early Wednesday.

The students who died have been identified as 16-year-old Tate Myre, 14-year-old Hana St. Juliana, and 17-year-old Madisyn Baldwin. At least two other students are in critical condition in the hospital.