The Meaning Behind The Sequin-Adorned Costumes Of The Prom

Warning: Some spoilers for The Prom below.

Lightweight Moisturizers Made for Summer

The story follows the Broadway quartet as it embarks on a self-serving image rehab mission, after it decides to use its perceived big city celebrity clout to support Indiana teen Emma (Jo Ellen Pellman). The provincial PTA, led by the tightly-wound Mrs. Greene (Kerry Washington), canceled her senior prom because Emma planned to bring her girlfriend as her date. Consistent with Murphy’s previous projects, the Broadway lights-themed colour palette lays the storytelling groundwork. Bookending the movie, the eye-catching jewel tones first differentiate the self-involved New Yorkers from the denizens of Emma’s hometown of Edgewater, Indiana; in the grand finale number, the colours bring everyone together. 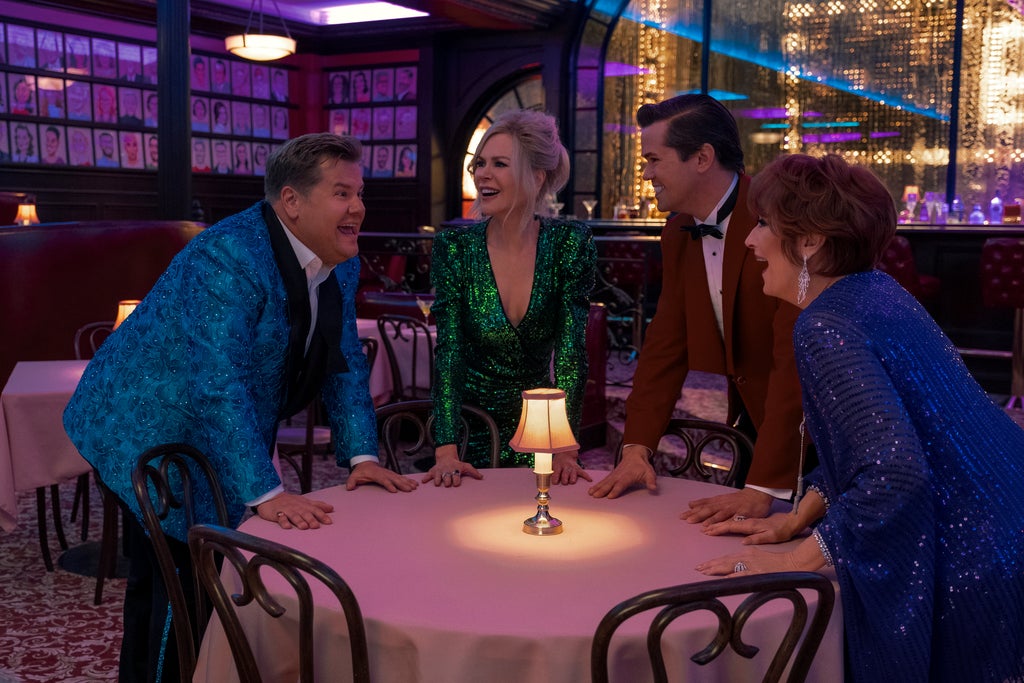 “[Murphy] talked about the feeling of a big Hollywood musical and bright colour palette of purples and pinks, aqua and greens [for the New Yorkers],” explains Eyrich — who’s won five Emmy Awards for her work on Murphy’s shows — on a call. “The rest was a neutral colour palette to show the difference between the glitz and glamour of Broadway and real life in the Midwest.” It’s also the colours of The Prom logo (see top photo).

Bridging the two, the James Madison High School colours are a golden yellow — as worn by Emma singing “Just Breathe,” as she faces bullying from her classmates — and spirited aqua — a distant cousin of the blue-green theme in Ratched, that Eyrich also worked on. The two hues foreshadow the two worlds colliding early on, when Dee Dee and Angie wear mustard and aqua, respectively, as they hitch a ride to Edgewater on Trent’s non-Equity tour of Godspell bus.

True to form, Dee Dee claims two rows on the bus, while lounging in a divine marigold cape and matching trousers by Valentino. She brazenly kicks her feet up on the seat back before her, her ultra-chic Stuart Weitzman ankle boots on full display. “Dee Dee’s just a confident grand dame of the theah-tah,” says Eyrich, whose “huge mood board” for Streep’s character featured larger-than-life icons, from Shirley MacLaine to Mitzi Gaynor and Lady Gaga. “Ryan really wanted her to be bold and brassy, and just grander than she really is. Being kind of a washed-up theater actor, but she still has a lot of bravado.” 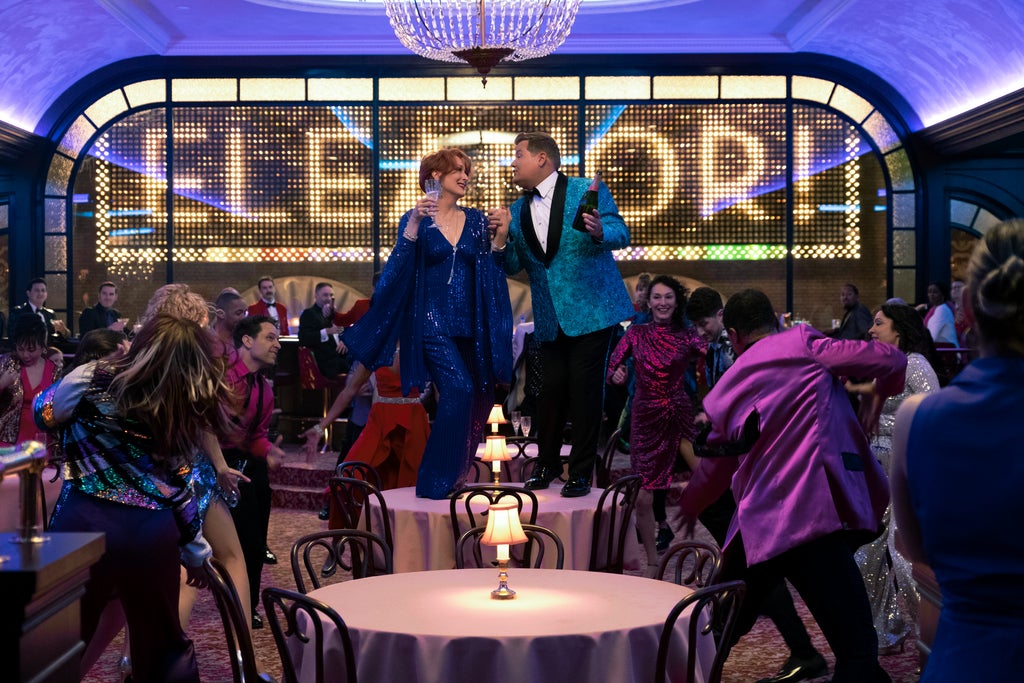 Behind-the-scenes, Eyrich enjoyed a collaborative process with the triple Oscar and Emmy winner to devise Dee Dee’s chic trouser looks and her dramatic cape signature, which Murphy also famously loves. “Meryl loves to play with clothes, and comes into costume fittings just wanting to play,” says Eyrich, who estimates that she custom-built half of Dee Dee’s wardrobe and amplified show-stopping pieces with fur trims, fluttery feathers, tassels, and opulent embellishments.

Dee Dee makes her grand entrance into the James Madison High gymnasium in a fur-trimmed red cloak accessorised with a pearl-embellished fedora. The group announces themselves as “liberals from Broadway!” to the bewildered and apathetic teen audience, while principal and Dee Dee stan Mr. Hawkins (Keegan Michael-Key) looks on in sheer star-struck delight. (Chronic Juilliard-name-dropper Trent arrives in a “New York City” T-shirt that might as well read: “interloper.”) 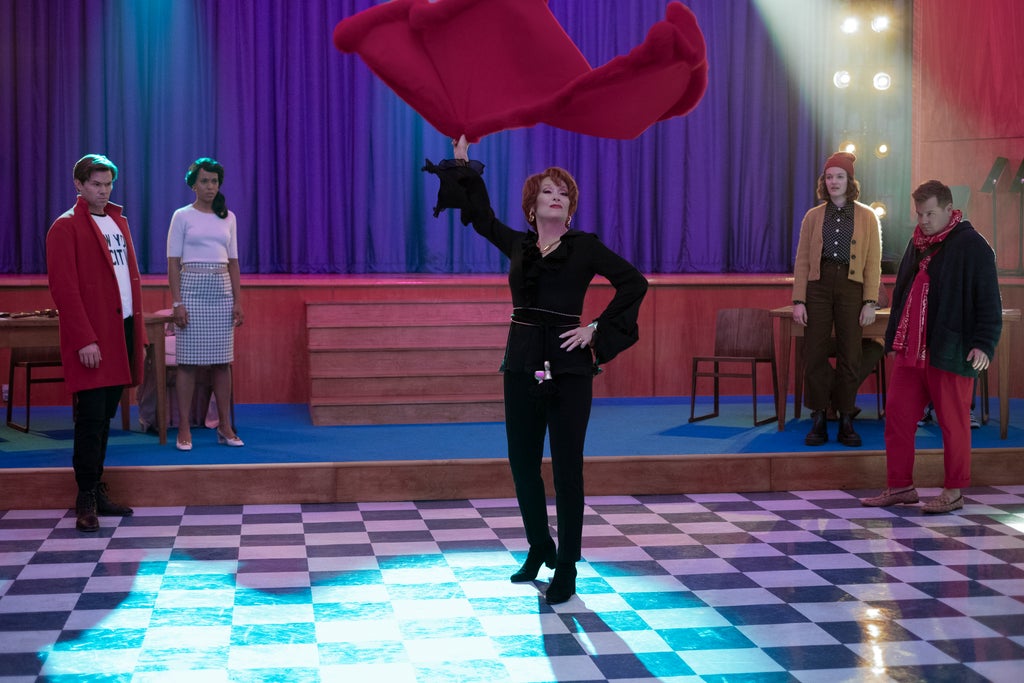 “We just tried to always make her the brightest one in the room. So the minute walks in the room, it’s, ‘Dee Dee’s here! It’s the Dee Dee show!’ She’s always theatrical,” says Eyrich. Referring to a glittery pink zip-up tracksuit Dee Dee wears for a fancy LED face mask sesh with Barry, Eyrich says, “Even with her sweatsuit, she had to wear her satin Moncler.”

The style of Angie, who channels a mod blonde bombshell aesthetic, was largely inspired by screen icon Brigitte Bardot — with a dash of ‘60s- and ‘70s-era triple threat Ann-Margret. “We were doing this one dance number, and Ryan loved the hat so much, he wanted it to be her signature,” says Eyrich, about the Breton cap Angie regularly dons to accent her sexy, undone French twist. 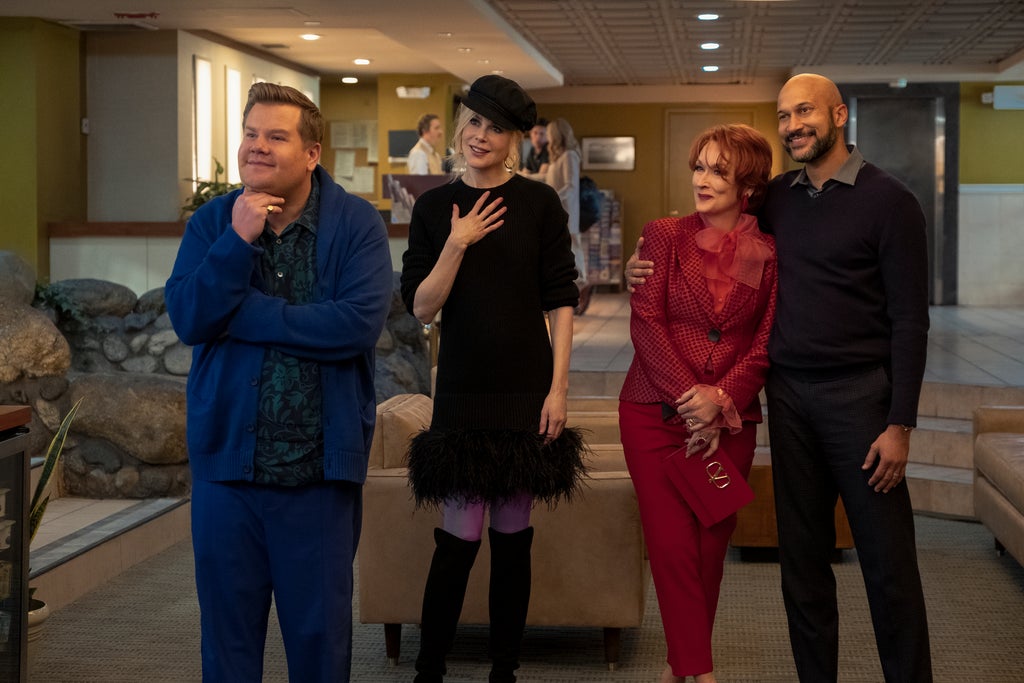 Dee Dee patronizingly assumes the suburban teens need fashion help, but Emma already has a lock on self-expression through her own adorable, eclectic, and throwback-inspired style — even on a budget and in a small town without a Saks Fifth Avenue, much to Barry’s horror. “Emma just loves going to a vintage or a thrift store, which Jo Ellen likes to do in her real life,” says Eyrich, who incorporated Pellman’s own thrifted tweed coat into Emma’s costumes. “So just being able to throw things together and [create] her own style, and just to be her own unique self.”

Although, Murphy did share a specific reference. “Ryan said ‘maybe a modern-day Annie Hall,” explains Eyrich. “We just didn’t want to go too on the nose with it.” So the costume designer worked natty menswear-inspired flourishes into a few choice daytime outfits, including the unexpected combo of a bright aqua short-sleeve boilersuit by Big Bud Press, over a beige button-down accessorised with a wide tie. 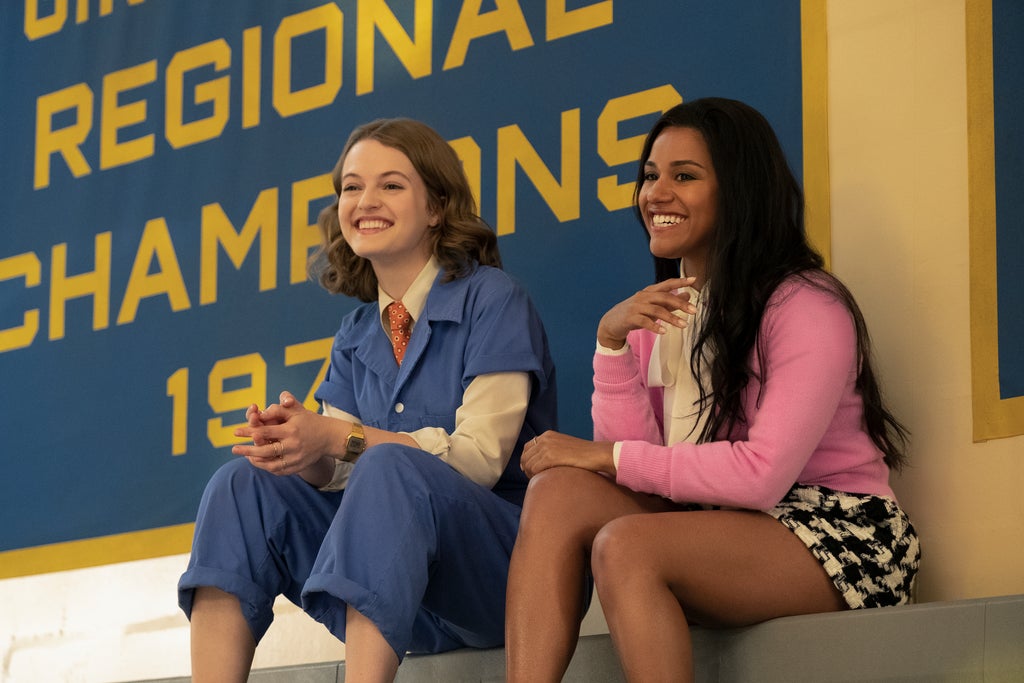 The neckwear theme threads into the ultimate inclusive finale prom, which Emma planned — and the enlightened Broadway vets funded out of the goodness of their hearts (and not as a PR move). To proudly and openly attend with head cheerleader girlfriend Alyssa (Ariana DuBose) — who just came out to her mother, the aforementioned PTA head Mrs. Greene — Emma envisions wearing a vintage tux to prom. Or what looks like one, anyway.

Behind-the-scenes, achieving Emma’s sartorial goal was also a costume design endeavour. Eyrich and her team first tried a series of authentic vintage blue tuxedos. “They were cute, but we figured it’s been done before and wanted to make it our own,” says Eyrich, also noting that retro tuxes tend to appear more matte on-screen. “Everybody else is going to be glittery, sparkly, and satiny, so we wanted to up her look to fit in.”

Finding the finale-appropriate blue to both mesh with the Broadway colours and shine the spotlight on Emma also proved an undertaking. “We made a whole tux jacket and pants out of a different colour and it was just too sky blue,” explains Eyrich. “About a week before [shooting], we decided we didn’t like the blue. We needed it to be more saturated aqua, so we found a different silk. It made a big difference.” 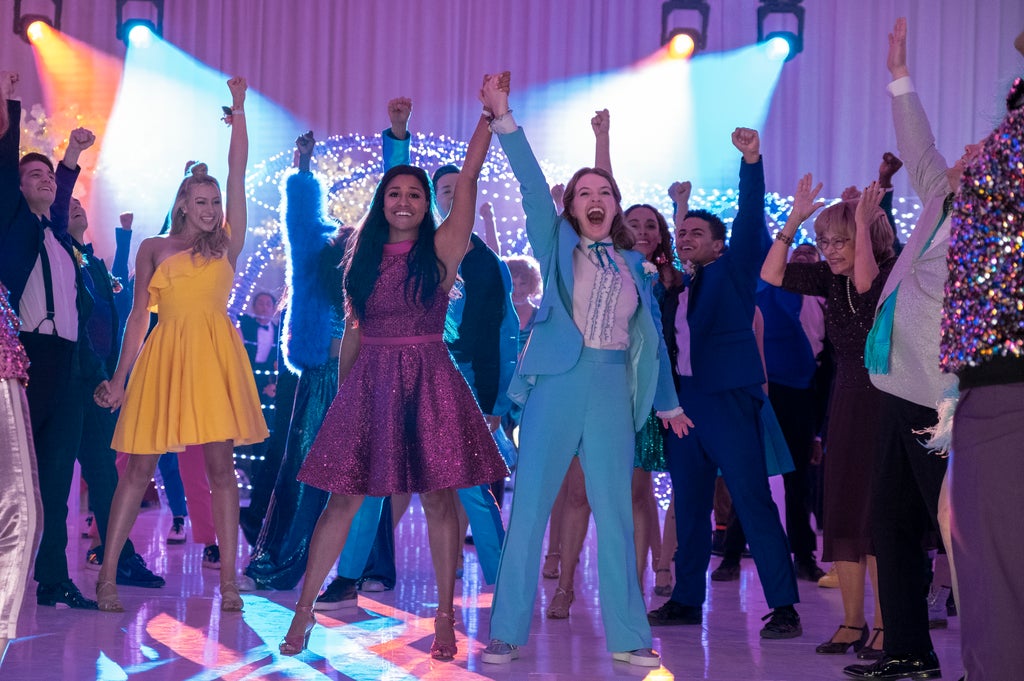 Eyrich also piped the ruffles of Emma’s tuxedo shirt in a matching hue, for extra dimension, but the skinny ribbon tie — the sartorial cherry on top — almost didn’t happen. “We were going to do a bow-tie or a tie, but it didn’t seem like Emma,” says Eyrich. “But then we found that sparkly ribbon at the nth hour, and we liked how it matched the ruffles.” The glittery silver platform sneakers gave a “thrift store nod” to the whole ensemble. 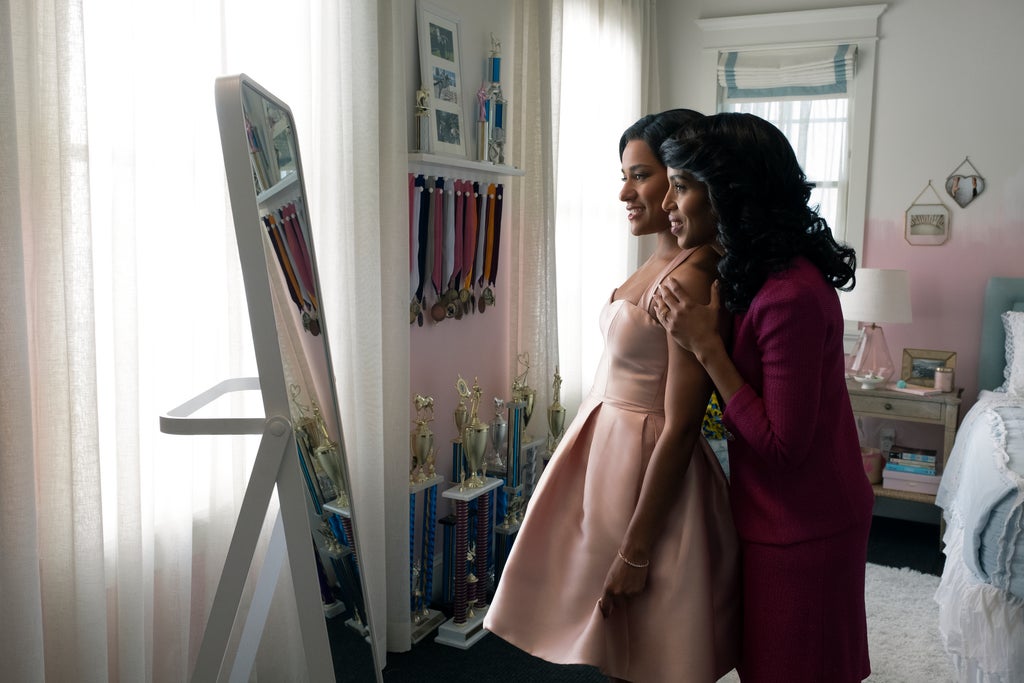 Eyrich meticulously plotted out which of the principals would wear each of the original neon lights colour scheme for the finale, like Dee Dee in a sequin pink trousers look and Angie in feather-trimmed green-blue. But the typically pristine pastel pink-clad Mrs. Greene arrives to support daughter Alyssa in a body-skimming and harlequin-chevron patterned dress encompassing all the symbolic hues (top photo). Perhaps there’s a Saks in Edgewater, after all, because the resplendent look is from the British youth culture-inspired Gucci Resort 2017 collection.

Eyrich curated a few “contenders” for the final and meaningful dress. “But the minute that Kerry put that on, it was pretty much, ‘this is it.’ She was really gunning for that one,” she says. Although Eyrich admits she initially tried pushing Washington to a different multicolour look, just to allow for all the jubilant, arm waving and body-swaying choreography in the finale extravaganza, “Time to Dance,” but to no avail (and who can blame Washington?) “She’s like, ‘I’m wearing the Gucci and I will find a way to dance. Don’t you worry,’” laughs Eyrich.

“We just wanted a rainbow,” Eyrich adds. “Because throughout the whole movie, she’s in pastels and all put together. Then she has a change of heart. She realises she doesn’t want to lose her daughter and that she loves her daughter — and loves everybody for showing her that love is the answer. She comes through the [rainbow] tunnel in her rainbow dress.”

The Dark Significance Behind Ratched's Costumes