Lucio Gonzalez started showing symptoms similar to those of a common cold several days after disembarking in San Francisco from a cruise on the Grand Princess. Within three weeks, the 73-year-old retired state park worker was connected to a ventilator in an intensive care unit in a Marin County hospital.

Tips for traveling to a national park in 2022

His son, Miguel, has sued Princess Cruise Lines and its parent company, Carnival Corp., alleging the companies failed to warn passengers that they risked contracting the deadly virus by boarding the ship in the early months of a pandemic that has now killed more than 750,000 Americans.

“There is no doubt in my mind that he contracted it on that ship,” Miguel Gonzalez said in an interview.

He is far from alone. The cruise line industry faces a wave of lawsuits from passengers and their families saying they or their loved ones contracted COVID-19 on a ship, resulting in either death or severe illness.

Yet maritime and corporate law makes it difficult to extract significant damages from cruise lines. Even after a series of coronavirus outbreaks at sea and a growing number of lawsuits, the industry’s biggest players face little serious threat, legal experts say.

Multibillion-dollar cruise companies are not worried about the potential financial effect of such lawsuits, even if they end up losing many of the cases, said Ross A. Klein, a sociology professor and cruise industry expert at St. John’s College at Memorial University of Newfoundland.

“It’s part of the price of doing business,” he said. “From their perspective, it isn’t serious.”

Activists and lawmakers have long alleged that cruise ship operators downplay onboard crimes and that investigations of them are muddied by questions of jurisdictions on international waters. The pandemic is now demonstrating how other legal constraints, and jurisdictional issues that seem to favor the cruise industry, are further complicating civil disputes over COVID-19 cases on cruise ships.

“The system is rigged in favor of the billion-dollar corporations that own these cruise ships,” said Mark Chalos, a managing partner for the San Francisco law firm that represents the Gonzalez family.

A spokesperson for Carnival Corp. said the cruise company does not comment on pending litigation.

Cases involving a death on a ship are governed by the Death on the High Seas Act, a 1920 law that limits damages collected by the family of a passenger who died because of negligence to financial losses only — not for pain and suffering, according to legal experts.

For an elderly cruise passenger, such as Gonzalez, family members can typically expect to collect funeral and burial costs and any financial support the deceased would have contributed, legal experts say.

Judges have been tough on plaintiffs who have sued over COVID-19 infections on cruise ships, requiring the plaintiffs to detail specifically how and when they were exposed to the virus and how the cruise line was negligent in exposing them, said James Walker, a Miami attorney who has filed several cruise line lawsuits. As a result, he said, judges have dismissed many lawsuits, while others have been settled for less than $10,000 each.

Although cruise ships had a history of outbreaks even before the pandemic, many judges have also agreed that cruise lines targeted with a COVID-19 lawsuit shouldn’t be held to a stricter standard than any other place of business on land, such as a hotel, restaurant or supermarket, according to attorneys who have filed such suits.

Among the challenges facing Gonzalez and other plaintiffs battling cruise lines is what is called the ticket contract, the multi-page document that governs the relationship between a cruise passenger and the cruise company. Passengers receive the document after booking passage on a cruise.

The contract varies slightly among cruise companies but almost always prohibits passengers from filing or being part of a class-action lawsuit against a cruise line and sets specific deadlines for filing a lawsuit. The contracts also require that cases not involving personal injury, illness or death be resolved through binding arbitration.

Medical personnel tend to passengers as they disembark from the Grand Princess cruise ship at the Port of Oakland in early March 2020, where thousands of people were stranded for days because of a COVID outbreak.

Legal experts say these requirements put passengers who live a long distance from the courthouse where they must file at a disadvantage. Such bureaucratic hurdles also discourage cruise passengers from taking on a cruise company.

“This means that if you live in Omaha, Nebraska, you can’t sue them in Omaha,” Ross said.

Princess Cruises made headlines in the spring of 2020, as COVID-19 spread around the world, because of several onboard outbreaks. The Diamond Princess was quarantined Feb. 4, 2020, in Yokohama, Japan, with more than 700 infected passengers. A passenger on the Grand Princess died of COVID-19 after returning to San Francisco from a cruise to Mexico.

During a Feb. 11-21 cruise taken by Gonzalez and his wife, more than 100 passengers tested positive for the virus, according to the lawsuit. 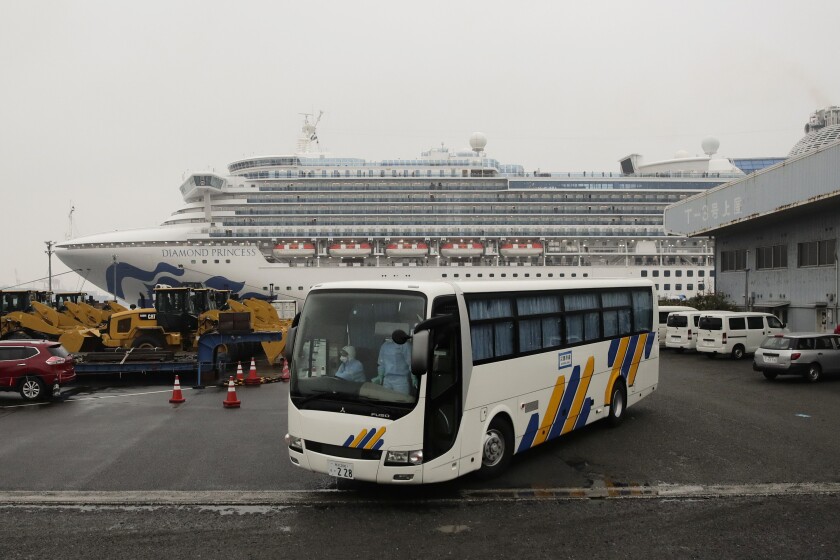 A bus leaves the quarantined Diamond Princess cruise ship at a port in Yokohama, Japan, in February 2020. More than 700 passengers tested positive for COVID-19 and 14 passengers died of the disease.

The key to winning a coronavirus lawsuit against a cruise line is proving the cruise ship failed to act reasonably under the circumstances, said Michael Karcher, a Miami attorney who specializes in maritime law.

But he said cruise lines are defending lawsuits filed early in the pandemic by arguing that nobody knew at the time the best health protocols to adopt. More recently, the largest cruise companies have added language to their ticket contracts notifying passengers that by booking a cruise they accept the risk of contracting the coronavirus on a ship — a common disclaimer at businesses nowadays.

Since the U.S. Centers for Disease Control and Prevention shut down cruising March 14, 2020, and extended it for more than a year, the largest cruise lines departing from the U.S. have adopted stringent health protocols, including requirements that passengers be vaccinated or tested for COVID-19 and wear masks under certain onboard conditions.

The lawsuit filed by Lucio Gonzalez’s family says that Princess Cruises knew the risks of COVID-19 from the outbreak on the Diamond Princess in Japan in early February but did not change its protocols to try to warn or protect passengers on the Grand Princess.

“Leadership at Princess and Carnival were well aware of what to look for in high-risk situations, and knew how to advise passengers,” the lawsuit alleges. “But, as plaintiff here would discover, [the] defendants did not apply their lessons from the Diamond Princess to subsequent cruises.”

Lucio Gonzalez was a Mexican immigrant who retired from Mt. Tamalpais State Park in Marin County, where he supervised a maintenance crew. His family describe him as a humble man who loved working outdoors, taking hikes, playing soccer with his friends and going on cruises with his wife.

Once he was admitted to the hospital with a COVID-19 diagnosis, Lucio’s condition deteriorated quickly and he was put on a ventilator before any family member could talk to him.

“None of us had a chance to say goodbye to him,” said his daughter-in-law Carla.

The lawsuit says Lucio Gonzalez’s death was the direct result of his exposure to the virus on the ship and the cruise line’s failure to take effective measures to prevent the spread of the virus.

Despite previous outbreaks, employees on the Grand Princess cruise adopted no changes to the daily routine, did not try to impose social distancing among passengers and did not warn guests that a previous passenger died of COVID-19, according to family members.

“They didn’t give them common courtesy to alert them that there was a possibility that they could have contracted something,” Miguel Gonzalez said.

The main goal in filing the lawsuit, he said, was to hold Princess and Carnival accountable for his father’s death: “My hope is that we can hold their feet to the fire and make them feel some pain.”