Meet the man with a collection of over 100 Christmas jumpers

This is a collection that spreads cheer far beyond the collector himself.

Adam Attew, a 32-year-old retail assistant from East London, has amassed over 100 Christmas jumpers over the last decade.

Wearing them seems to brighten the moods of others around him – so he can’t wait to start donning them again come December 1, at which point he’ll wear a different one daily.

‘It started over 10 years ago when I needed a jumper for a Christmas market where I was selling baked goods,’ he tells Metro.co.uk.

‘Christmas jumpers were just starting to be a thing then. I had never even thought about them before. I wanted to be as Christmassy as the setting of the market.

‘So I bought one and wondered if there were more out there. Then I was shopping in the Christmas sales and spotted a few in the sale for £3, some for even £1, and got about five or so.

‘Every sale period I continued looking online for new ones until I had 25 or so.’

He buys the knits from high street stores such as Primark through to second-hand car boot sales and charity shops. 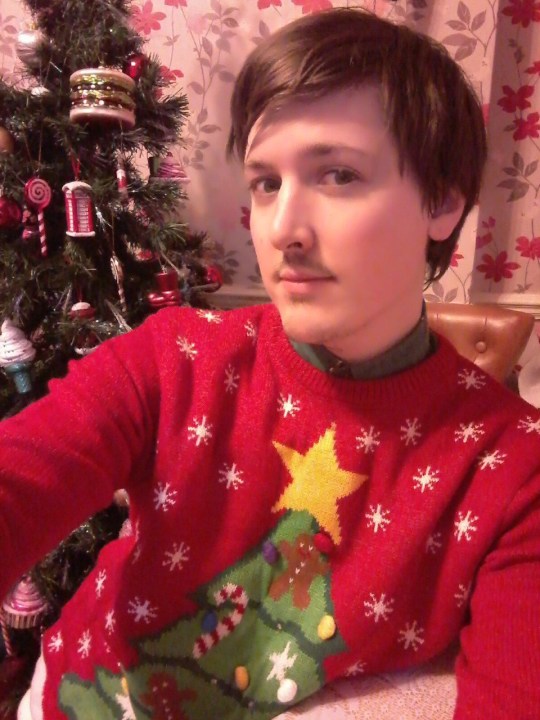 On Facebook in 2016, he created his own advent calendar by posting a picture each day wearing one of the 25 jumpers in the lead up to the big day.

‘I guess I wanted to continue with it and before I knew it, several years later, I had over 100… oops,’ he said. 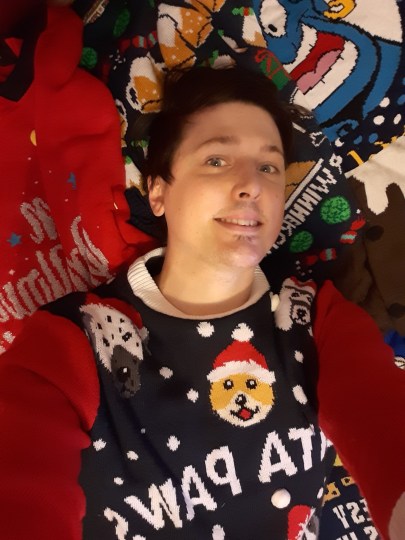 ‘I think getting them for less spurred me on big time as I have always been a savvy shopper – getting a £16 jumper for £3 was a buzz and a lot of my jumpers were bought like that.

‘Most I have paid under £5 for with some special ones ranging between £12-16 each, online.’ 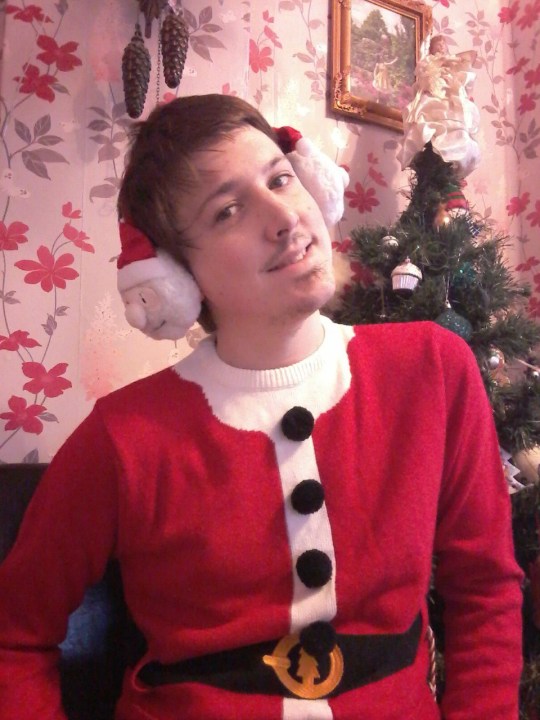 Compliments from others spurs him on, as Adam says the attention makes him ‘feel great’.

‘Not everyone knows the scale of my jumpers collection, and those that do love seeing the new ones,’ the retail assistant tells us.

‘At my workplace I wear one and often am the only one, so people sometimes think I’m the manager as everyone else is plain clothed.’

At Christmas time, Adam’s boss allows staff to dress in festive attire as he is also a big Christmas fan. Usually only Adam takes up the opportunity.

‘When I am out at events again I’m the only one usually in festive attire, which makes me stand out straight away,’ he explains.

‘I like the compliments and enjoyment people get from them, bringing some festive cheer to the day. 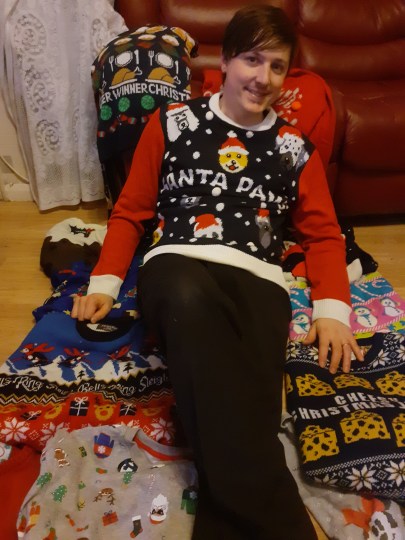 Adam on a pile of his collection (Picture: Adam Attew)

‘Some people do think they are a bit bright and when I told my colleagues I had 100 they were just a bit stunned, like what do you say to that, when a typical person has maybe two?’

In total, he thinks he’s spent over £600 on jumpers, but believes if he didn’t shop during sales the cost would be over £1,000.

Not everyone is a fan, as some have told Adam they look ‘garish’ and ‘ugly’ – but he doesn’t mind one bit.

‘If it can make someone smile, maybe that can make their day. Kindness and a smile doesn’t cost anything,’ he adds.

‘But I also have a “bah humbug” jumper – the anti-Christmas, Christmas jumper.’ 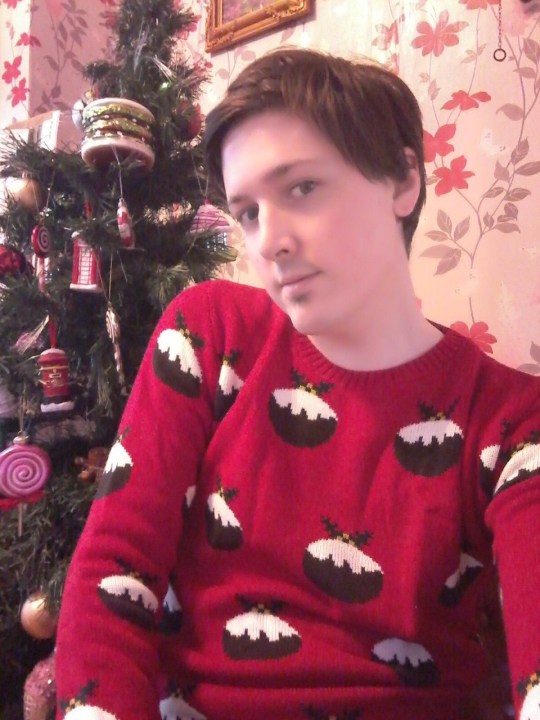 Adam loves Christmas – evidently. And collecting jumpers is a way for him to truly embody the spirit of the season that passes as quickly as it comes around.

He tells us: ‘To me, jumpers are something to look forward wearing, as Christmas is only once a year.

‘Counting down like an advent with my jumpers is just like the excitement of a chocolate advent calendar – each day you open the door and get a new chocolate, but with jumpers.

‘Having festive clothing brings it all together.’

As for the future, he plans to buy more Christmas jumpers if any take his fancy. 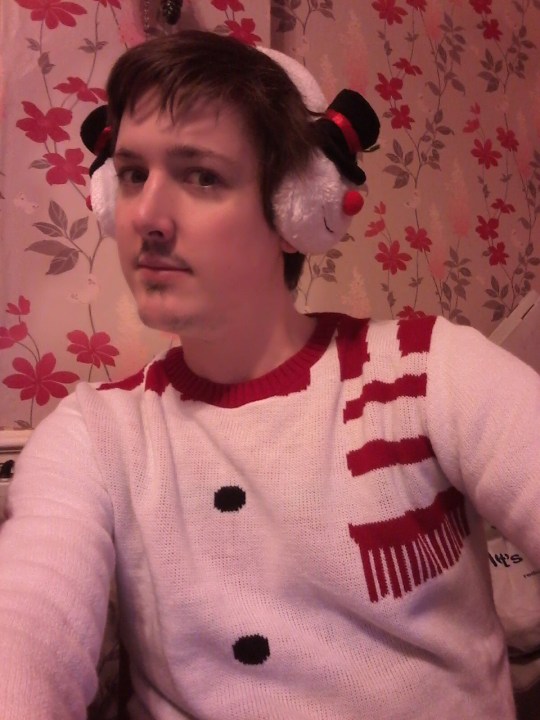 He says: ‘Space is a premium so need to be sure I want it.

‘I am always on the look out for funny ones and bright festive scenes, and eBay is the best friend for that after Christmas.

‘I never used to classify them as a collection, but they are a wearable collection.

‘I don’t just accumulate them and put away to not use. I never had a specific number in mind but here we are at over 100 so who knows.’

But for now, they can emerge loud and proud from storage, after being vacuum packed under his bed for 11 months.

Through December, Adam will be posting pictures of his jumpers on Instagram.

MORE : Half-zip jumpers and fleeces are no longer just for dads – here are our top knitwear picks