‘Such is life’: In coronavirus wards, death is a foe but a fact

During their daily morning round of the intensive care unit, hospital staffers and medical students pause outside room No. 10, abruptly emptied of the patient who lost his nearly month-long battle against COVID-19 the previous evening.

The man died at 6:12 p.m., the medic leading the briefing tells the group. There is a short hush. And then they walk on.

Even for ICU workers for whom death is a constant — and never more so than this year — witnessing the loss of a fellow human being to the virus can be a churn of emotions.

Paramedic Bertrand Brissaud cares for the patient in room No. 10, a few hours before he died after his nearly month-long battle against COVID-19 at Bichat Hospital, AP-HP, in Paris.
(AP Photo/Francois Mori)

For their own good and for their patients, they try to remain detached. They have coping mechanisms. Meditation or talking helps for some. For others, tending the body of a patient who could not be saved is part of moving on. Because the living require their attention, and there will always be other deaths to deal with, simply functioning requires not becoming overwhelmed.

But calibrating their relationship with death isn’t easy. Some worry they could be seen as callous if they’re too matter-of-fact or, conversely, that emotions could hurt them if they get too involved. Some days they manage better than others. Sometimes they feel the need to confide to the ICU’s in-house psychologist, in a rage, in tears, in need of her hot tea and understanding.

This is what it is to encounter death, over and over, in the COVID-poisoned days of the 2020 pandemic.

“Seeing people dying one after the other after you’ve spent hours and hours in a room, doing everything you can, really, to get them out of there is very, very tough,” says Melanie Serra, a paramedic at the ICU ward in the Bichat Hospital in Paris. It was the first hospital outside Asia to report a COVID-19 death, back in February. 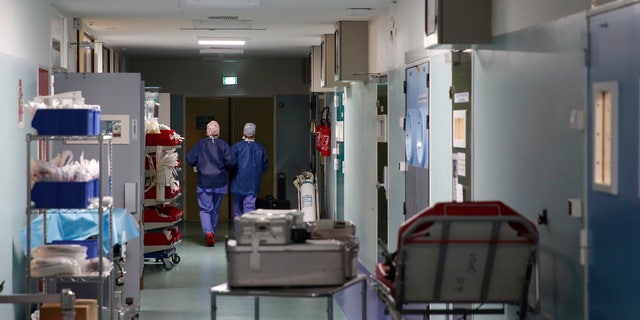 It was also where the ICU patient in room No. 10 died on Dec. 1. His was one of 775 virus deaths in France that day, adding to a national death toll now topping 56,000 and the worldwide count of more than 1.5 million dead.

The man was alive on the first of two days that Associated Press journalists spent immersed with the ICU staff. But by the time the overnight shift handed back to the day crew on the second morning, room No. 10 was empty and had been disinfected twice. The vacated bed had fresh linen. The TV monitor that had displayed the patient’s vital signs was black and blank.

He was, quite simply, gone. But not from the thoughts of those who worked hard to heal him. That morning, during his meditation that helps him process emotions from the ICU, paramedic Bertrand Brissaud set aside time to think about the patient, “a little positive thought.”

HEALTH CARE WORKERS DECORATE WITH PPE FOR THE HOLIDAYS THIS YEAR

As one of the man’s carers, Brissaud had been more physically intimate with him than many people are with their friends. The former fire officer was among the last staff members who had suited up in protective gear and tended the man in his final hours, rolling him onto his side and massaging his back, shoulders, buttocks and heels to slow the buildup of bed sores.

But because the patient had been maintained for weeks in a coma, they never exchanged words.

Brissaud knew the man was originally from Egypt, lived in France, was a father. His admission details attached on the door of room No. 10 with a sticker marked ”COVID+” showed that he would have celebrated his 64th birthday in December. Beyond that, the patient remained somewhat of an unknown to the carers who became so intimately acquainted with his body. 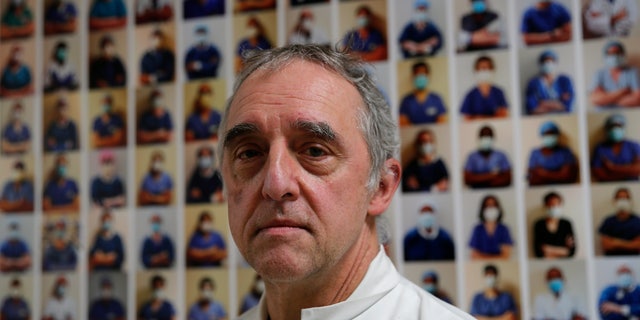 Dr. Philippe Montravers poses in front of a collection of portraits of medical staff at Bichat Hospital, AP-HP, in Paris.
(AP Photo/Francois Mori)

“These deaths are so quick, happening in front of you. You get a little spasm of heartache, a ‘Oh, he’s gone,’” Brissaud says. “There is all this work you have to do in yourself to understand that we do our best but that we are not God.”

In the man’s final hours, the ICU staff sensed the end was close. But nurses and paramedics still tended to him as if it wasn’t. They rolled him onto his front to aid breathing and later rolled him onto his back. They checked and readjusted tubes going in and out of his body, hooked to machines that kept him alive but which, ultimately, could not arrest his inexorable decline.

“He is not doing well,” nurse Hyad Boina said after treating the patient on what proved his final morning. Boina, 35, said that if the man’s family called for an update, he would feel obliged to say that “it’s very serious and that the patient is between life and death.”

Making her rounds, the unit’s psychologist, Emmanuelle Busch, sought out one of the staffers who worked for weeks with the man and was reassured to find that she was doing fine. The man’s age and the fact that his death wasn’t unexpected made it easier for his carers, Busch determined.

Some other deaths during the pandemic hit harder. She says the virus death of a young lung-transplant recipient made one ICU paramedic “very angry.” Another came to her “in tears, saying, ‘They are all dying. What we are doing is useless.’”

But as well as being a foe, death is also accepted. “It’s never pleasant,” Busch says, “but nor is it necessarily experienced as a failure.”

Serra, the 32-year-old paramedic who also treated the man in room No. 10, says that seeing patients “slowly go downhill without being able to do anything is very, very complicated” emotionally. She tries to protect herself by not dwelling on her experiences but also says: “The hardest thing is losing a patient. That’s the truth. Even if you distance yourself.” 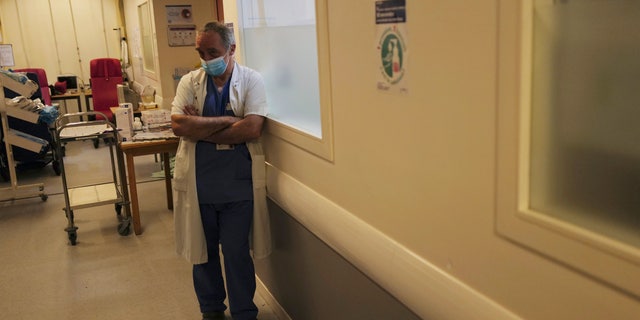 Dr. Philippe Montravers is pictured next to room No. 10, hours before the patient inside died after his nearly month-long battle against COVID-19 at Bichat Hospital.
(AP Photo/Francois Mori)

“We can’t allow ourselves to be affected by all the deaths because, otherwise, how do you cope? We’d fall into depression and stop working,” she says. “With this gentleman, because of how his condition evolved, we’d been expecting it for several days. It is very hard and very cold but we have no choice but to say to ourselves, ‘So be it. Such is life.'”

But in saying so out loud, she also frets that “I will come across as a monster.”

At the end, the monitors that show vital signs of all ICU patients — the markers of existence, rendered in colored numbers and graphs of peaks and troughs — signaled that the man in Room No. 10 had lost his battle.

“His heart just stopped beating. We saw the flatlines, like in the movies,” says Brissaud. He put on a mask, went into the room, and switched off all the machines, the ventilator, the mechanized syringes and the alarms.

He says he then made way for other colleagues, including Boina, the nurse, who prepared the body for its onward journey to the morgue. They got rid of the tubes, catheters and dressings, and they washed and dried the body.

“They had spent a lot of time caring for him, so they wanted to bathe the body to help him on his way,” Brissaud says. “It’s our way of being involved in the final process. It’s very important in the ICU ward. We often work with people who have died. Through the funeral washing, we finish the job.”