NEW YORK — This week, Michelle took the remaining men to Minneapolis, her hometown! This was a big chance for the guys to learn a lot about her and see if they could see themselves even relocating there someday. Michelle’s parents, siblings, friends, and career as a teacher are all in Minnesota. She started off her time in her hometown by visiting her parents and catching them up on where the process stands and how she’s doing.

Joe’s One-on-One
The group of 11 men met up with Michelle by a beautiful fountain. She told the guys that she had a surprise: the first one-on-one of the week would be starting right now. Joe, Mr. Minnesota, got the first one-on-one. The guys were a bit disappointed because Joe is from Minneapolis and they think that gives him a big advantage on his date. They drove hand-in-hand in the car, and stopped to kiss for a bit. Ooh! They ended up Target Field the home of the Minnesota Twins. Michelle had to throw out the first pitch and because she threw it in the strike zone, she gave Joe a kiss in front of the crowd.

Then, they stopped by Michelle’s high school where she showed him her locker, the awards case at school where she is still featured, her yearbook, and of course her old basketball court! Joe and Michelle played some one-on-one. Michelle said she felt “magnetic energy.” Joe said it was the best date he’d ever been on. As they spoke after their game, Michelle told Joe that he reminds her of her father and brother…in the fact that they are all reserved. Joe said that his dad is like that and he’s only seen his father cry once or twice his whole life. He said it’s a trust thing and he’s trying to take his walls down for Michelle.

At dinner, Michelle said, “I don’t think there’s anybody better to go on the date today but you.” Joe said that sports shaped who he was, but that came with injuries. He has seven screws and a plate in his foot! Amazingly, he was able to go back to playing basketball, but sadly, it wasn’t at the same level. He suffered anxiety and depression during that time period. It got so bad that he even thought about suicide. He broke down to tears talking about the loss of his love of basketball, and struggling to find his way to reimagining his life without it. Michelle was very touched that he shared such deep feelings with her. She offered Joe the date rose. To end the night, they went on a romantic Ferris wheel ride.

Group Date
The group date card read, “Casey, Rodney, Martin, Leroy, Rick, Clayton, Olu, Chris, Brandon, meet me at the stadium.” The guys although initially disappointed they didn’t get the one-on-one date, were very excited to go to the stadium! That meant Nayte was getting the final one-on-one date this week. “I went out on a limb for her,” Chris said, “Everything I said fell on deaf ears. The way things played out, I feel like I got the short end of the stick.” Boohoo, Chris!

Clayton was excited to be going to the Vikings stadium so he could show off his football skills. Instead of football, there were actors pretending to be Vikings and Viking warriors and they would be doing some Medieval battles. They got dressed up as Vikings, had to eat raw fish, head hash, and arm wrestle.

During the evening portion of the date, Michelle and Clayton had a nice time talking and seemed to make a deeper connection. He’s very good at asking her questions about herself. It wasn’t all talk. They also did some kissing! Brandon walked in just as they stopped kissing, so that was a bit awkward! Michelle gave him some Swedish fish and wine since he was such a great sport during the gross-eating competition earlier in the day. He told her that he’s fully invested in her. Michelle seemed to get swept up in the moment. Chris meantime, just sat there and didn’t really put in any effort the whole night. A stark contrast to what he accused the men of doing last week. He accused Nayte of sitting back and not trying, and he never took it upon himself to go find her. She gave out the group date rose to Clayton. Chris was sitting there and in shock that she gave out the rose without ever talking to him. Casey got worried that now Chris was even more desperate and could ruin another rose ceremony for everyone.

Nayte’s One-on-One
The date card read, “Nayte, I’m looking for a man who isn’t afraid to test the waters.” They went to Lake Minnetonka and Michelle said it’s a dream of hers to have a lake house there someday with her future family. Nayte and Michelle went boating for a bit and had fun.

As they docked for a bit, Michelle told Nayte it was about to turn into a group date, which left him a bit confused at first, but then two of Michelle’s best friends showed up! Tia and Allie jumped right in to ask Nayte questions to find out if he’s there for the right reasons. He explained the Chris situation to them and they seemed to understand what he had meant. Michelle’s friends enjoyed meeting Nayte and they feel that she just needs to follow her heart.

During dinner, Michelle told Nayte that she appreciated him being himself. He talked about the importance of being able to be his silly self and not have things get too serious where you can’t have any fun in the relationship anymore. Michelle said that she was in a three-year relationship where she just kept trying and trying to the point that it made her feel sick. Doctors considered giving her a food bag because she was so upset she couldn’t keep anything down. She moved back in with her parents when they broke up. She said she thought she had a disease but it turns out it was just a toxic relationship. She told Nayte that it was one of her most favorite dates ever of all time. Didn’t she just say that to Joe?

Back at the house, Chris tried to rally some support for his war against Nayte. He vented to Martin about how Nayte is getting attention because of her “infatuation” with him and saying that Nayte doesn’t deserve it. Martin seemed to shrug it off, but Chris stayed fired up about the situation. He seemed determined to confront her before the rose ceremony. He decided to get in a black car and confront Michelle, while she was on her one-on-one with Nayte! She looked over his shoulder and saw Chris walking towards the table. He asked to speak to her for “one moment” and said, “it’s important.” Nayte said, “weird.” She decided to go talk with Chris as Nayte grabbed his drink, sat back and laughed. Chris told Michelle that he felt “played” by the whole situation after he told her about Nayte. He said that he wanted to warn her and for her to not make the wrong decision. Michelle said she was caught off guard by his comments about Nayte, and Chris asked her why she put on a fake smile and act fake with him all day on the group date. She said that while he called everyone else out on the lack of effort, he had the worst attitude out of anyone. “I can speak for myself, and I want a man who is going to stand and support me when I speak, and not a man who is going to speak for me,” Michelle said to Chris. Here, here! Well said. “Ultimately, I don’t feel like we’re on the same page,” she said and with that, Michelle sent Chris packing! Bye! She walked back in to see Nayte and told him that she sent Chris home. Michelle then offered Nayte the date rose which he accepted! Fireworks went off and Nayte and Michelle kissed as Chris drove away in defeat.

Cocktail Party
Michelle announced to the group that she decided Chris wasn’t her person and she decided to send him home. She walked around the block with Rick and they did some pretend runway walking. Michelle asked Rick if he would consider moving to Minnesota and he said yes! Then, they danced on the sidewalk while a street performer played a piano. It was a really beautiful moment! Michelle and Rodney enjoyed the view from the roof and screamed that they love Minnesota. He worked his hardest to maintain the connection they made on their one-on-one date and keep the fire burning. He said that his confidence was boosted after they had the chance to talk…and kiss.

Martin told Michelle that he’s worried that she is saying things to him that she has said to other men as well, and she asked him if he thought she was the kind of person to blow smoke up his *bleep* and he immediately backpedaled and said, “no.” She said, “I’m not hard to please,” and he replied, “Not high maintenance?” Michelle said, “No.” “That’s the one thing about girls in Miami, very high maintenance,” Martin said. She then asked him what makes a girl high maintenance. Oh Martin, you are digging yourself in a hole? He said that it’s a woman who expects a man to do everything for them. He tried to add that it’s not empowering for the woman to have a man do that, but Michelle wasn’t buying it. 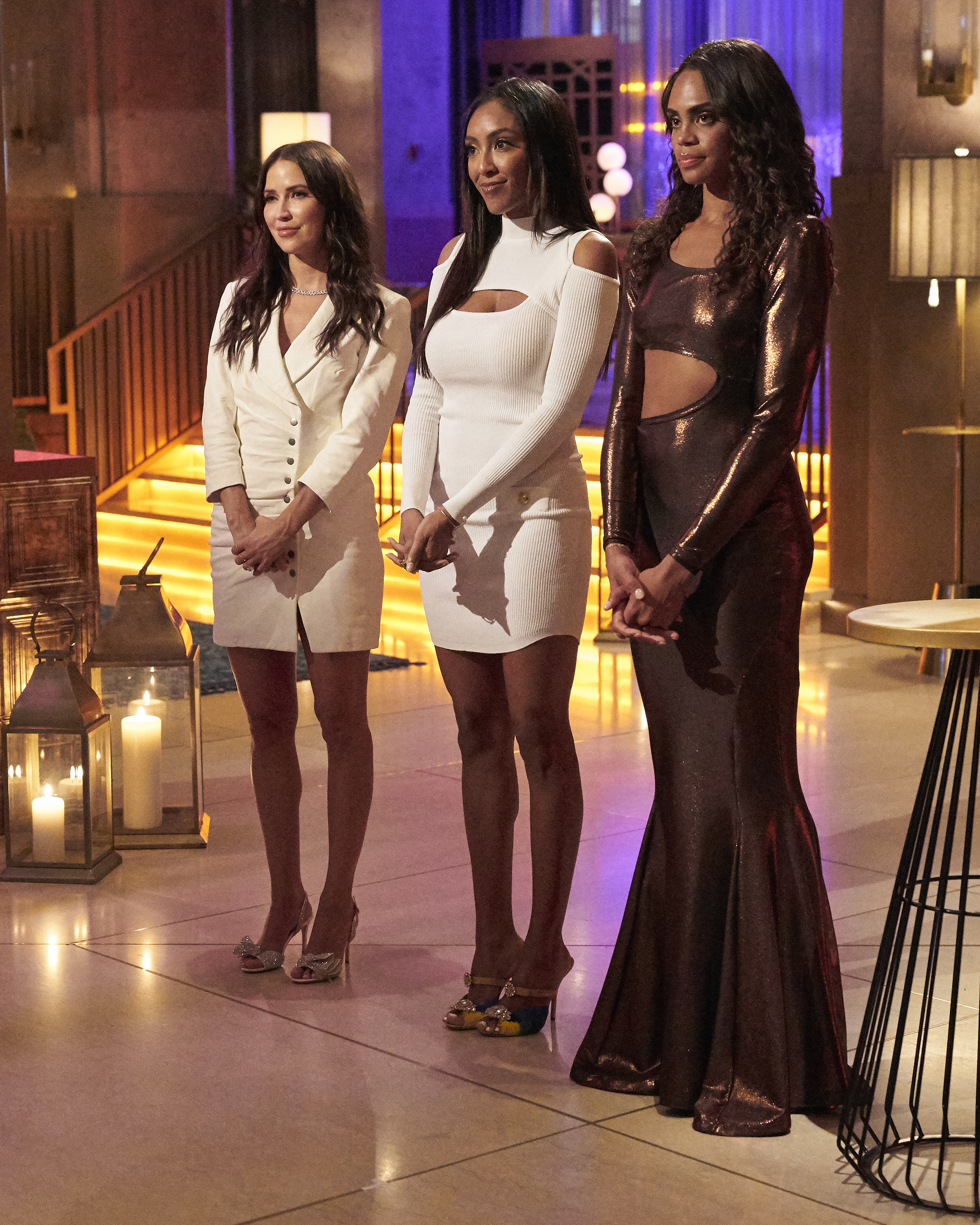 That meant that Casey and Leroy were eliminated. Michelle told her elite eight that they would be spending a second week in Minnesota.

Preview of the Rest of the Season
There was a preview showing the fun parts of some of Michelle’s upcoming dates, but then also of course the drama! “I can’t be everybody’s person,” Michelle said. The stress of breaking the men’s hearts starts to get to her. She said that her heart is also breaking along the way. Will she find someone who is all in on her just like she is for her final pick? Time will tell!

ALSO READ: Meet the 30 men vying for Michelle Young’s heart on ‘The Bachelorette’