Is Your Pet Healthy Enough?

A recent study found that pet health is on the decline in the U.S., and what’s even more concerning, is that your dog or cat’s health could impact your own. Dr. Manny sits down with veterinarian and author Dr. Karen Halligan to find out what you can do to keep your four-legged friend in tip-top shape

Transmission of COVID-19 from a pet owner to pet has been documented genetically for the first time in the United States, according to a study published in One Health by the Translational Genomics Research Institute (TGen), an affiliate of City of Hope.

Researchers involved with the Arizona case study found a pet parent and two pets all were infected with the identical strain of coronavirus known as B.1.575, an early version of SARS-CoV-2, the virus that causes COVID-19, the authors said in a news release.

This study is one of five nationwide pilot studies investigating COVID infections in animals. The release stated the study is the only one using whole genomic sequence, a laboratory method that looks at genetic makeup, of the virus from samples of humans and pets.

“This is the first report of the B.1.575 lineage in companion animals. Genetically linking SARS-CoV-2 between people and animals, and tracking changes in SARS-CoV-2 genomes is essential to detect any cross-species SARS-CoV-2 transmission that may lead to more transmissible or severe variants that can affect humans”, the authors wrote.

Genetic samples were collected from swabs of a cat and dog and their owner. The genetic makeup of the virus detected were found to match identically, suggesting zoonotic transmission of SARS-CoV-2 from human to at least one pet, according to the report. The study authors said both animals were asymptomatic but were in close contact to the symptomatic pet owner who tested positive for COVID -19.

FILE- In this April 1, 2017, file photo, a service dog named Orlando rests on the foot of its trainer, John Reddan, of Warwick, N.Y., while sitting inside a United Airlines plane at Newark Liberty International Airport during a training exercise in Newark, N.J. American Airlines is banning emotional-support animals in a move that will force most owners to pay extra if they want their pets to travel with them. The airline said Tuesday, Jan. 5, 2021, that it will allow animals in the cabin free of charge only if they are trained service dogs. The change takes effect Monday, although passengers who already bought tickets can fly with a companion animal until Feb. 1. (AP Photo/Julio Cortez, File) 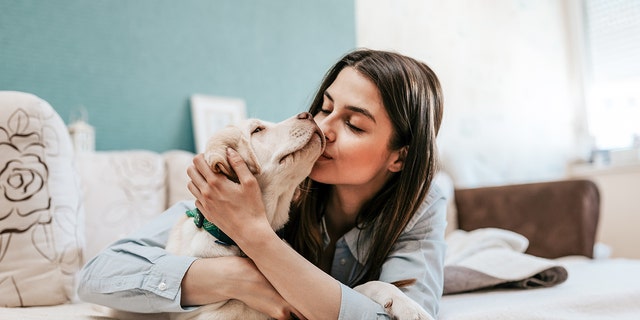 According to the article, the owner was in close contact with both pets engaging in activities such as petting and cuddling the animals, walking the dog and cleaning the cat’s litter box, while displaying symptoms of COVID19. The dog and cat frequently sat on the owner’s lap, slept in the same bed and during the home visit, researchers observed the cat and dog stayed in close contact with each other, the authors noted in the report.

“This case study was the first example we had from the project that demonstrated the likelihood of virus transmission from a pet owner to animals in the household,” Hayley Yaglom, lead author of the study and TGen Epidemiologist stated in the release.

The researchers stated there is no current evidence that companion animals play a role in spreading COVID 19 to humans. However, they did state that there have been reports of the coronavirus transmitting from infected people to animals.

The TGEN case study pointed out that although there are limited studies that have compared viral genome data of pets with owners, this report provides genetic evidence of virus transmission from the infected pet owner to pets, identified through whole genome sequencing.

“This is a great example of using genomics to gain intelligence about pathogens,” David Engelthaler, Ph.D., director of TGen’s Pathogen and Microbiome Division in the news release. He added, “This study shows that we can not only use genomics to help track COVID variants across the globe, but we can also use this technology to track exact transmissions, and in this case transmission from pet owners to pets.”

Dr. Robin Sturtz, a Veterinarian and Director of Veterinary Technology at Long Island University Post in New York, was not part of the study, but commented to Fox News that based on contact tracing it has been reported that humans can pass the virus to companion animals on very rare occasion. 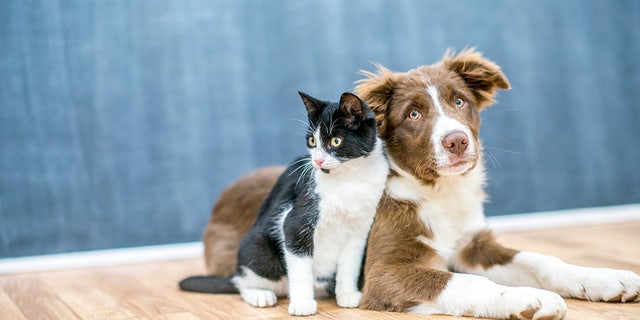 The study was led by researchers at the University of Pennsylvania’s Perelman School of Medicine and the School of Veterinary Medicine.
(iStock )

Sturtz tells Fox News, “It is encouraging to see that the study of COVID-19 transmission is being formalized and categorized on a genetic identity basis. So far, there are only two animals in the study, so there is a lot of work that needs to be done.” Sturtz also recommended, “People getting vaccinated protects their pets, as does keeping your distance from them if you are sick.”

A spokesperson for the Centers for Disease Control and Prevention (CDC) gave a statement to Fox News that said, “These findings are unsurprising as most cases of SARS-CoV-2 infection in animals, including pets, have happened after contact with a person with COVID-19. This pandemic is being driven primarily by person-to-person spread. CDC continues to recommend that pet owners with COVID-19 avoid contact with pets to protect pets from infection”.

Translational Genomics Research Institute (TGen) is an Arizona-based nonprofit organization dedicated to research and affiliated with City of Hope, an independent research and treatment center for cancer, diabetes and other life-threatening diseases.