‘Unbalanced’ Trump Fanatic Who Took An Arsenal To The Capitol On Jan. 6 Pleads Guilty

A fanatical Donald Trump supporter who parked his truck full of weapons in Washington on Jan. 6 and then joined in the Capitol mob while carrying firearms because he believed the then-president’s lies about a stolen election pleaded guilty to two counts on Friday.

Lonnie Coffman of Alabama, an Army veteran who served two tours during the Vietnam War and was described by one family member as “a hermit,” pleaded guilty to a count of possession of destructive devices ― 11 Molotov cocktails ― and a count of carrying pistols without a license during a virtual hearing before U.S. District Judge Colleen Kollar-Kotelly. He will also enter a guilty plea for possession of destructive devices in Alabama. Coffman will give up all the weapons he brought to D.C. as part of the plea deal. Coffman admitted in his statement of offense that he was knowingly carrying two loaded firearms around D.C.

Coffman was arrested in the District of Columbia on Jan. 6 after he approached officers in an attempt to get to his Red GMC Sierra, which was inside a police perimeter. Coffman had parked just off the U.S. Capitol grounds, near the Democratic National Committee and Republican National Committee buildings, which had been targeted by a pipe bomber who still remains at large.

After they shut down the area because of the pipe bombs, a law enforcement officer spotted a gun on the seat of Coffman’s pickup. A subsequent search of the truck turned up a “loaded 9 mm Hi-Point handgun; a loaded Windham Weaponry rifle; a loaded Hatfield Gun Company SAS shotgun; several large capacity ammunition feeding devices loading with more than ten rounds of rifle ammunition; hundreds of rounds of ammunition; a crossbow with bolts; several machetes; camouflage smoke devices; stun gun” and 11 Molotov cocktails.

When law enforcement officers searched Coffman, they found a 9 mm Smith & Wesson handgun in his right pocket and a .22-caliber North American Arms revolver in his left pocket. He was initially indicted in January and has been detained ever since.

Lonnie Coffman’s truck near the U.S. Capitol on Jan. 6. Police found a cache of weapons and ammunition in the truck.

GPS records showed that Coffman came to D.C. on Dec. 11, the day before another pro-Trump rally in support of the president’s efforts to overturn the results of the 2020 election, and Coffman tried to meet with Sen. Ted Cruz (R-Texas). A staffer in Cruz’s office wrote that Coffman seemed “to be coming from the ‘friend’ angle in wanting to … help with the election fraud he saw” and that Coffman seemed “unbalanced” or “not 100% there.”

Authorities also found a note inside Coffman’s vehicle that singled out a Muslim member of Congress, called a judge a “bad guy” and praised a number of conservative figures. Another note had contact info for conservative talk-show host Mark Levin and Fox News personality Sean Hannity. 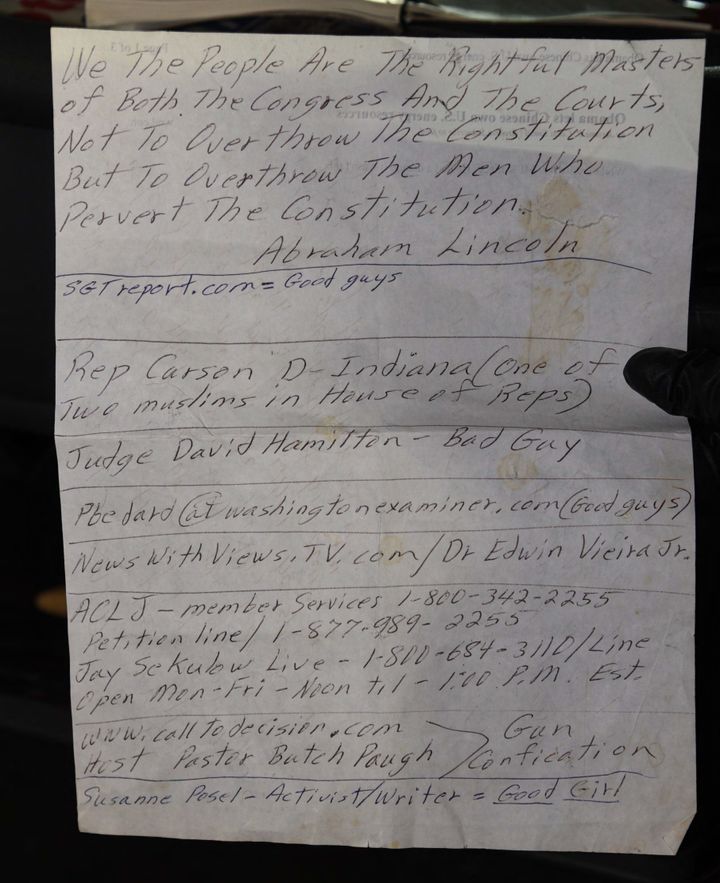 A note the U.S. attorney’s office said was taken from Lonnie Coffman’s truck.

Coffman will continue to be held in jail until his sentencing before Kollar-Kotelly of the U.S. District Court for the District of Columbia.

The FBI has made more than 650 arrests in connection with the U.S. Capitol attack, roughly one-fourth of the total number of potential defendants who engaged in chargeable criminal conduct on Jan. 6. The FBI continues to seek information on 350 people who engaged in violence on Jan. 6, including 250 who assaulted law enforcement officers.