Though it was previously known that Harry would be attending and presenting at the event, Meghan’s attendance was merely suspected ― since she was also in the city ― but not officially confirmed.

The gala, which “recognizes extraordinary leadership” and honors men and women who serve their country in the military, was especially poignant because it fell the day before Veteran’s Day in the U.S. and Remembrance Day in the U.K.

Both Harry and Meghan donned Remembrance Day poppies, which are meant to symbolize the sacrifice of fallen soldiers, at the event.

The duke himself is a veteran, having served in the British Army for over 10 years, including completing two tours in Afghanistan.

The Duke wore a classic black tux for the event, while the Duchess of Sussex donned a red Carolina Herrera dress.

At the event, Harry presented the inaugural Valor Awards to recipients who demonstrated “courage and perseverance in the face of great danger or personal struggle.”

The royals met with the award recipients on the red carpet. In video footage captured by HuffPost, the Duchess of Sussex turned to recipient Sgt. 1st Class Julian Kitching and referenced their shared alma mater, saying, “So, good to Northwestern, right?”

Kitching looked shocked, asking the royal, “How did you know that?”

As the group laughed, Meghan smiled and said, “I know something about all of you guys.”

At another point in the video, she answered a reporter on the red carpet who asked if she was proud of her husband by turning and saying, “I’m always proud of my husband.”

HuffPost spoke with Marine veteran Ishmael Alvarado on the red carpet, who said this was “a really special event for me.”

“I mean, it’s just like a home away from home. It gives me that sense of pride, and the things that I miss now being a civilian, not on active duty,” he said.

Alvarado added that it was “wonderful” to see Prince Harry, a veteran himself, and Jon Bon Jovi, who was honored with the 2021 Intrepid Lifetime Achievement Award for his work with veterans affairs. Alvarado was hoping to have a chance to speak with the singer because he had danced to one of his songs while graduating as an 18-year-old private first class.

The Marine said he thinks it’s “good that they’re getting some recognition and understanding the needs of veterans that serve their country” and said he’s seen less stigma around mental health in the veteran community, exemplified by the fact that more people are talking about it.

“Even with the issues that I deal with, there’s times when I didn’t want to talk,” he said. “We were taught in the military to be tough and to suck it up. And now, it’s not frowned upon realizing that you have mental health issues that you can get from being in service and active duty.” 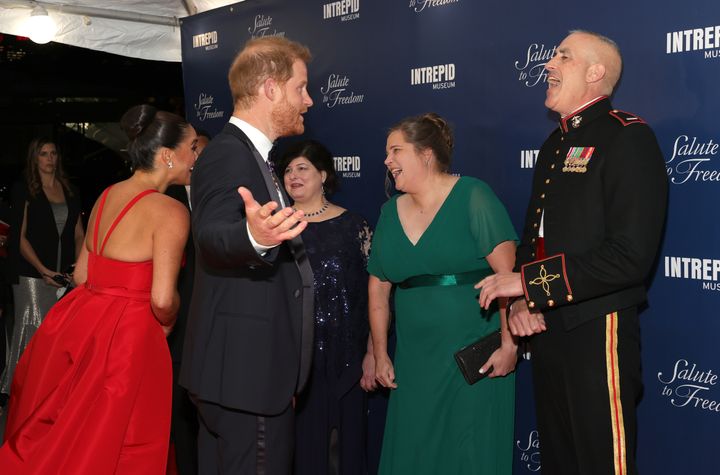 The Duke and Duchess of Sussex pictured with Valor Award recipients on the red carpet.

In his speech at the event, Harry kicked things off by telling audience members that last week, he “went for a ride on the Oscar Mayer Weinermobile — how’s that for living the American dream!”

He then spoke about his own military service and touched on some of the issues Alvarado mentioned, including veterans’ “invisible wounds.”

“For too long, invisible injuries were treated as just that —invisible — and were destined to be swept under the rug at the risk of shame, guilt, or just a lack of understanding,” the prince said.

“For years, we (and our families) orient our entire lives around the mission, the duty, the commitment, and yes — the hurry up and wait. And when we return, we long for the same feelings and contributions: self-purpose, focus, service to others, and being part of a team.”

“As many of us see it, service isn’t loud,” he continued. “Service is what happens in the quiet and when people aren’t looking. It’s about how we take care of each other every day,” he said. “It’s about the camaraderie we share…the laughs, the comfort, the pain, the challenge, and yes, the banter.”

“My experience in the military made me who I am today,” Harry added, “and I will always be grateful for the people I got to serve with — wherever in the world we were. But in war, you also see and experience things you hope no one else has to. These stay with us, sometimes like a slideshow of images.” 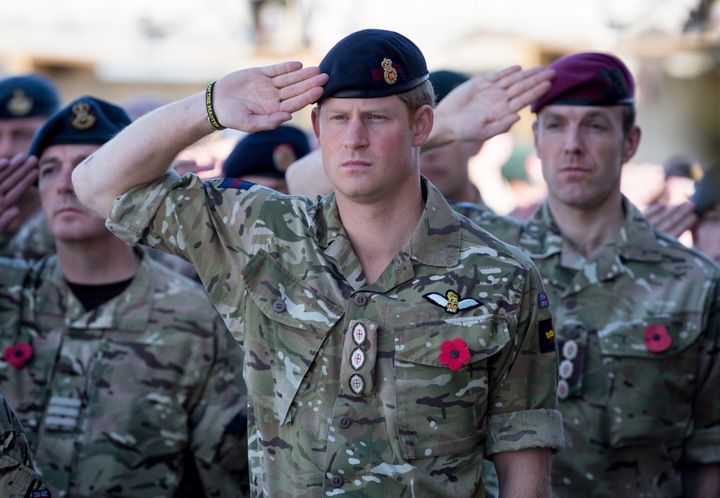 Prince Harry salutes at a Remembrance Sunday service at Kandahar Airfield on Nov. 9, 2014, in Afghanistan.

The Duke and Duchess of Sussex are currently visiting New York for another whirlwind trip, just weeks after they were last in the city.

Meghan was in town for the first day of the DealBook Online Summit on Tuesday, where she appeared on the “Minding the Gap” panel alongside Mellody Hobson, co-CEO and president of Ariel Investments, and moderator and DealBook founder and columnist Andrew Ross Sorkin.

During the panel, the duchess spoke about her efforts in advocating for paid parental leave for all, which so far have included writing a letter to Congress and making calls to both Democratic and Republican senators. She insisted the issue isn’t political.

“I don’t see this as a political issue, frankly,” Meghan said. “Look, there is certainly a precedent amongst my husband’s family and the royal family of not having any involvement in politics. But I think this is ― I mean, paid leave, from my standpoint ― is just a humanitarian issue.”

Later that day, the Duke of Sussex appeared on a panel about misinformation for the 2021 RE:WIRED conference, where he said he told Twitter CEO Jack Dorsey about a “coup” ahead of the U.S. Capitol attack.

“Jack and I were emailing each other prior to January 6 when I warned him his platform was allowing a coup to be staged,” the duke said during his panel. “That email was sent the day before. And then it happened and I haven’t heard from him since.”

Subscribe to HuffPost’s Watching the Royals newsletter for all things Windsor (and beyond).