Bally’s Corporation is playing two hands in the high stakes game to win a Chicago casino, and the East Coast gambling company says it doesn’t care which one wins.

Either one of their bids — among five submitted to Mayor Lori Lightfoot’s last month — would wake up one of the “economic sleeping giants” they are eying as potential sites, executives from the Rhode Island based company said this week.

One Bally’s proposal already faces stiff opposition from a South Side alderman whose cards have been on the table for years against bringing a casino to her Bronzeville ward.

Their other bid is being met with open arms by another alderman who says the site of the River West plant that currently prints both of Chicago’s major daily newspapers would be an “ideal” site for a casino operator to essentially start printing money.

Wherever the chips fall, the company says it would go all in with investments totaling $1.6 billion for the big-city casino-resort that Lightfoot is banking on to shore up Chicago’s depleted police and firefighter pension funds.

“We don’t have a preference on site,” said Chris Jewett, director of corporate development for Bally’s, which submitted two of the five casino proposals now under review by Lightfoot’s office. “We think that they’re both economic sleeping giants.”

One of those giants is the 28-acre truck marshaling yard south of McCormick Place near DuSable Lake Shore Drive and 31st Street.

It’s also adjacent to the former Michael Reese Hospital site that’s under redevelopment — an area that Ald. Sophia King (4th) has long declared off-limits to the potential casino development that Chicago mayors have been coveting for a generation.

King said in a statement that the truck marshaling yard “should be immediately eliminated” from consideration.

“Since the beginning of this process, the community has been clear in their desire not to see a casino built at the site,” she said.

King said she’s “open to the goals of using this new revenue stream to help Chicago deal with its overwhelming fiscal responsibilities,” but asserted “it should not be done at the expense of our communities, especially marginalized ones” including those in her mostly Black ward.

Bally’s director Wanda Wilson said “we will be talking with the alderman about this, and we’re hoping to find some common ground.”

“We have had lots of meetings [with community groups] and we will continue to meet with everyone in the community to make sure that we are successful,” Wilson said. “Certainly, I’m not looking to put something in a neighborhood that is not acceptable to the community.”

Bally’s got a warmer welcome from Ald. Walter Burnett Jr. (27th), whose ward includes the Freedom Center at Chicago Avenue and Halsted Street, which is eyed in the company’s other bid. 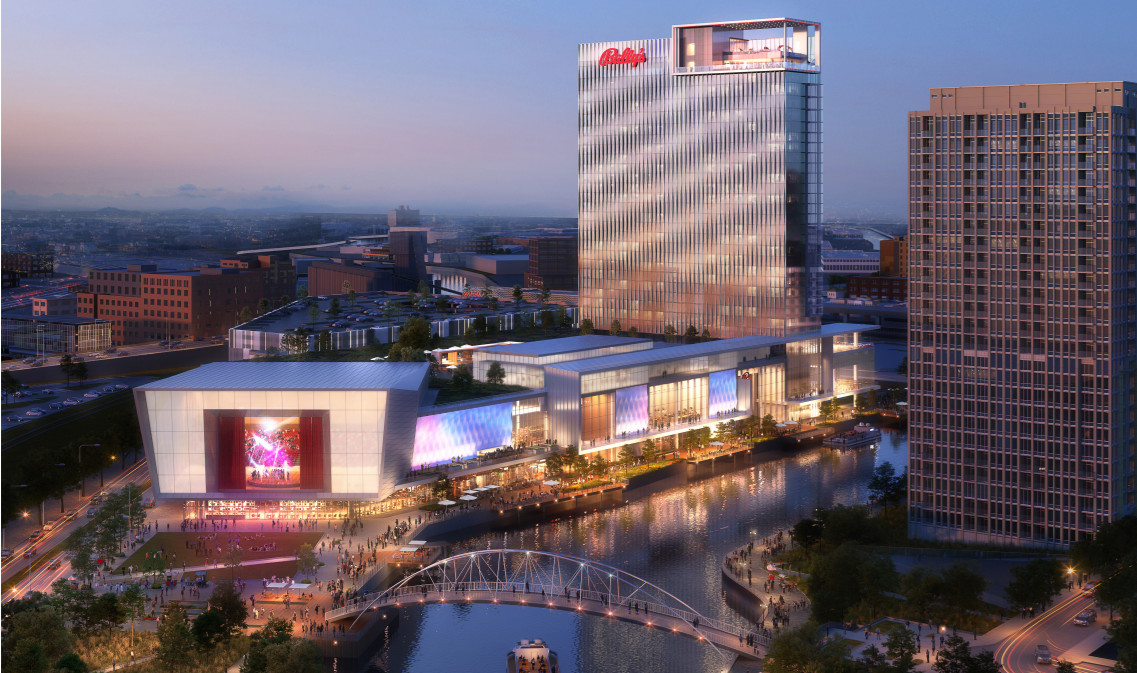 An artist’s rendering of a proposed casino that would be located near Chicago Avenue and Halsted Street.

“It would be an ideal spot for a venue like that, tourist-wise,” Burnett said. “It’s right off the expressway. The L station on Grand [Avenue] brings a lot of tourists into the area on their way to Navy Pier.”

“I haven’t gauged the community on this stuff yet because it’s too preliminary, but I think it’d bring a lot of jobs to the neighborhood,” he said.

For both bids, Bally’s says they’d launch a temporary casino site adjacent to the Freedom Center while a permanent structure is built.

If their River West bid wins, that would mean demolishing the plant, which houses the Chicago Tribune newsroom and prints that newspaper along with the Chicago Sun-Times and others.

The plant is owned by Nexstar Media Group and leased by Tribune Publishing. A Nexstar spokesman said Bally’s has an option to buy it.

Representatives for Tribune Publishing and Alden Global Capital — the vulture hedge fund that took control of the Tribune earlier this year — did not return messages seeking comment on their future printing plans. The company says minority investors will account for 25% of the ownership group, including philanthropists, business owners and “a couple of sports stars,” Jewett said.

Bally’s is up against three other proposals to land the Chicago casino license.

Two of those competing bids are backed by billionaire Neil Bluhm and his Rush Street Gaming company, one slated for McCormick Place’s Lakeside Center, and the other at the vacant South Loop plot known as “The 78” near Roosevelt Road and Clark Street.

The fifth bid comes from Hard Rock International, which wants to break ground as part of the proposed One Central development that would sit just across DuSable Lake Shore Drive from Soldier Field. Representatives have declined to release more details.

Lightfoot’s office has said it will create “a review committee made up of a cross-section of City departments” to recommend a bidder. The mayor wants the finished casino-resort to open by 2025.