On the day before Halloween this year, singer Meghan Trainor disguised herself as Cindy Lou Who from “How the Grinch Stole Christmas” to hype her holiday album, “A Very Trainor Christmas,” during a livestream show with e-commerce startup Talkshoplive.

“I look like a grandma,” Trainor said from her home in L.A., suppressing a giggle before waving her hands to the banging bass from one of her Santa songs.

And there was music legend Dolly Parton, who gave her audience exactly what they wanted. “We like a show,” Parton said during the October debut of her Talkshoplive shopping channel.

Donning a caramel-colored top with puffy sleeves, Parton whipped out a pen to sign a copy of her latest book, “Dolly Parton, Songteller: My Life in Lyrics,” and draw a star and lips during the broadcast from her office in Nashville.

“We like to star in everything, don’t we?” she said to the camera. “So let’s star in this autographed picture of this book.”

During the pandemic, Parton, Brooks and Trainor have managed to sell their tomes and music directly to fans, thanks to channels streamed on phones, tablets and computers by Talkshoplive. Unlike previous decades when an actor or singer might have been ridiculed for peddling products on TV (remember Cher selling shampoo in the early 1990s?), celebrities today can sidestep the stigma of starring in their own infomercial.

Since launching in 2018, Los Angeles-based Talkshoplive has been lifted not just by word-of-mouth and relationships cultivated with performers, managers, agents and publicists but also by deals with publishing houses and ReaderLink, a major book distributor that reaches retailers such as Target and Walmart. Talkshoplive has attracted Alicia Keys, Julie Andrews, Kobe Bryant, Bella Thorne and brands ranging from Fred Segal and Jane Seymour-endorsed Crépe Erase to iHeartRadio and St. Jude.

The entertainers seem to be naturals on the platform, which blends the on-air showmanship established by TV shopping networks decades ago with the influencer economy of the moment buoyed by social media. The A-listers don’t have to leave their mansions.

With the pandemic-related cancelations of live concerts, book readings and other gatherings where fans could be close to their favorite celebrities, livestream shopping is gathering momentum as a pragmatic tool and a communal activity.

“If we didn’t have COVID,” Oscar winner and bestselling author Matthew McConaughey said on the Nov. 23 premiere of his 87-minute presentation on Talkshoplive, “I was going to do shows on the road and tell stories from the book. Anyway, I hope to maybe do that in some form later on in life.” 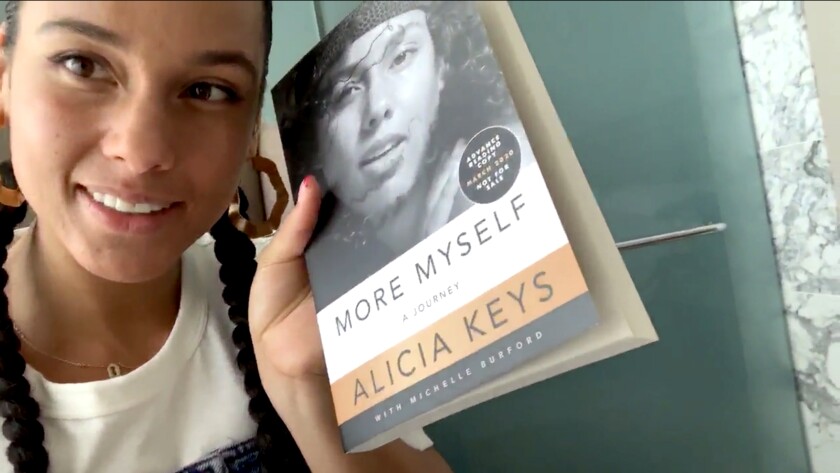 Alicia Keys is one of a growing number of celebrities who have sold their products during livestream shows on the platform Talkshoplive.

From a sparsely decorated room in his Austin home, the “Dallas Buyers Club” actor plugged $18.99 copies of his memoir, “Greenlights,” along with bundles of hats, T-shirts, hoodies and koozies, priced between $40.50 and $59. “This discussion is zero filters,” he said.

Tony D’Onofrio, chief executive of retail consultancy TD Insights, said, “The society where we are in, video is really the center of everything.” In particular, he said, the pandemic has “accelerated trends that are already underway. E-commerce has been accelerated by five to 10 years. Livestreaming is a variation of e-commerce. It’s a way to do e-commerce with entertainment.”

For Brooks, being one of the first household names to test Talkshoplive in the U.S. “just made sense,” he wrote in an email to The Times. “It is every artist’s dream to be in one spot, have the audience come to you, inform them so they can make the best decision for themselves and, if they choose to buy, fulfill their requests right then and there. No waiting. Brilliant. This way you know the people who take care of you, as an artist, are being taken care of as a customer.”

After his backup singer, Karyn Rochelle, and Yearwood sold out their albums and mugs, respectively, on Talkshoplive, Brooks launched his own sales effort in November 2018 for his book “The Anthology Part III: Live.” Encouraged by the numbers, he returned for another show to promote the book. 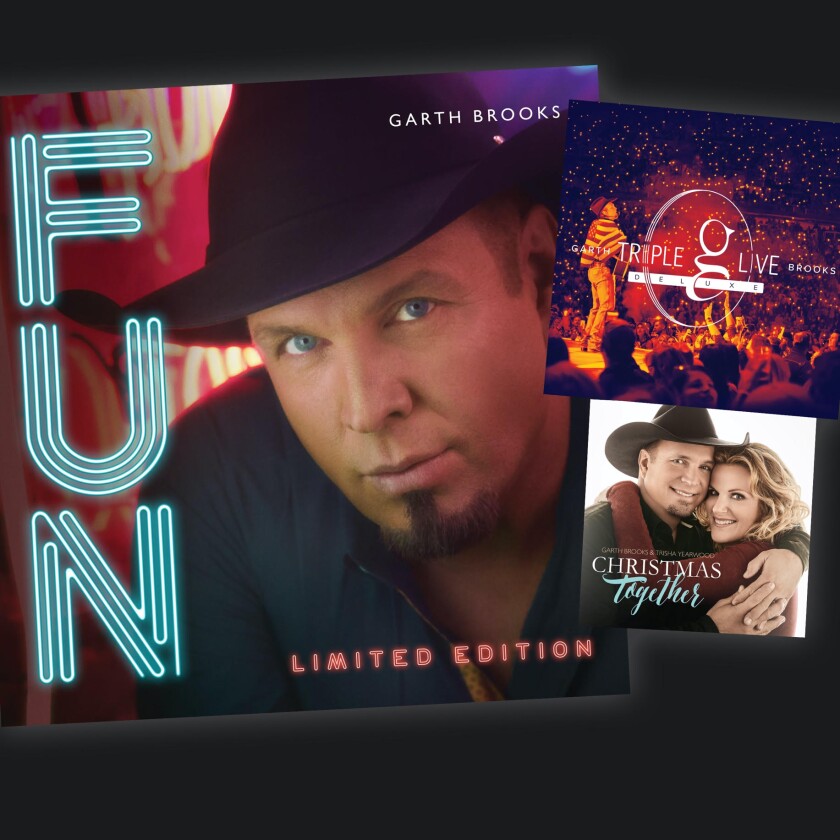 Country star Garth Brooks has promoted his albums and book on his Talkshoplive channel.

Brooks summed up the approach he takes in all his livestreams this way. “An artist should never be put in the position of hawking their own product, so just talk to the people,” he said. “Be sincere about what you like about what you are doing, and [followers] will do what makes them happy.”

To help newbies have a lively show and ring up sales, Talkshoplive sends tips to sellers, said Bryan Moore, who cofounded the 17-employee company with his sister, Tina Moore. In previous jobs, the siblings had spearheaded social media campaigns for Brooks and Yearwood as well as for “Entertainment Tonight,” the United Nations and the British Academy of Film and Television Arts. Moore estimated the number of Talkshoplive sellers and channels is 10 times bigger this year than last year.

Instead of charging a fee to use its platform, Talkshoplive takes a percentage of sales. Moore declined to release sellers’ figures. As proof of increasing interest, he said Talkshoplive’s book sales increased eightfold in the last six months and that McConaughey and Parton plan to return for more shows.

Still, the landscape for livestream commerce in the U.S. is uncharted and fragmented. On one end, startups such as Talkshoplive and Foot Locker-backed Ntwrk are emerging. On the other, e-commerce giant Amazon is enabling sellers to market nail art kits, virtual reality goggles and more through its interactive shopping service, Amazon Live.

Having studied the Chinese language for 13 years, Moore is tracking the retail scene in China, where livestream shopping is becoming the norm led by categories such as apparel, cosmetics and food. The trade group Interactive Advertising Bureau projected that global livestream-generated sales will double to $120 billion this year. 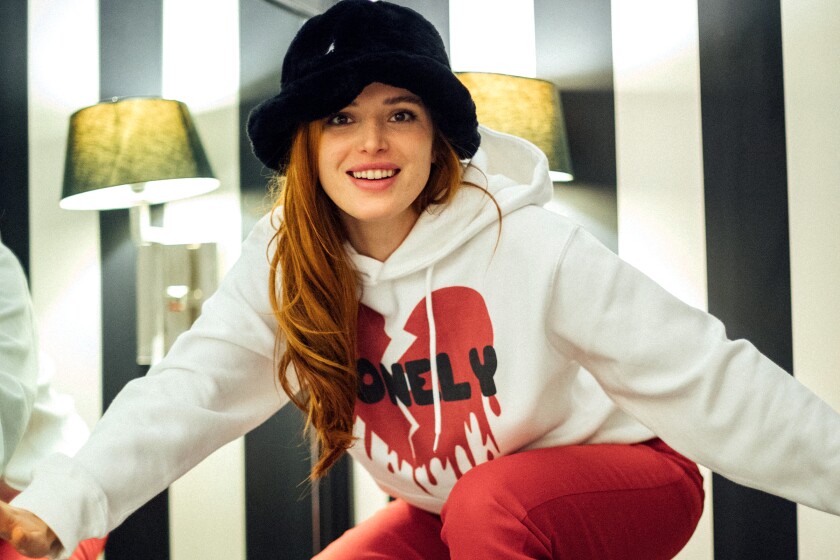 Actress-singer Bella Thorne sports a hoodie from her Lonely merchandise collection, which she dropped on Talkshoplive as part of the e-commerce platform’s Cyber Monday shopping events on Nov. 30.

Talkshoplive aims to increase adoption in the U.S. by answering one question: “How can I make the easiest experience for people who come here and want to buy my product?” Moore said.

Sellers can access Talkshoplive’s tech platform on any device via its app or website. They also can use broadcasting software for a professional production or patch in with costars through video call. The sale is executed within the video player, which can be embedded on any site. Each seller is responsible for fulfilling and shipping individual orders.

Buyers don’t need to log in to Talkshoplive before making a purchase. However, if fans follow a celebrity on Talkshoplive, they’re notified when the entertainer goes live. The shows can be watched long after the stars have logged off. A month after Parton’s premiere, fans continued to leave comments such as, “We love you,” on the archive. 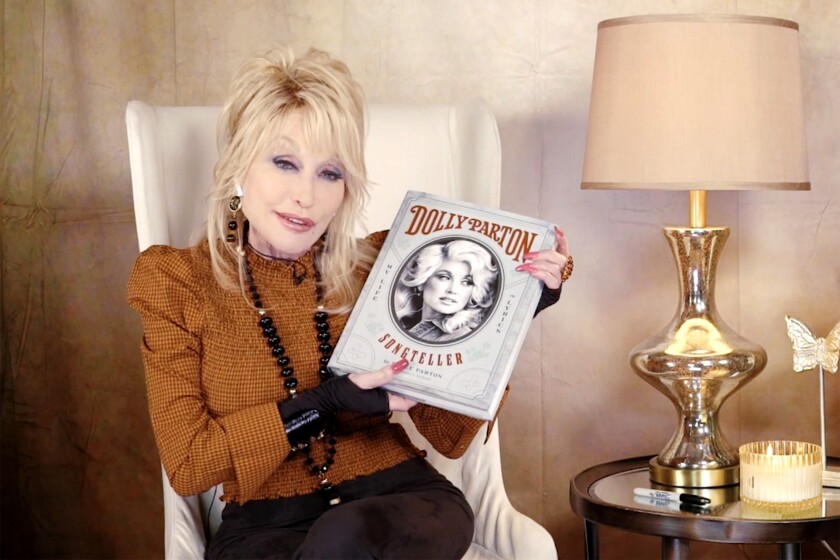 Dolly Parton holds her autobiography, “Dolly Parton, Songteller: My Life in Lyrics,” which she promoted on Talkshoplive.

“It’s not just about the sale,” Moore said. “We’re saying we are the vehicle to provide the greatest experience for your fans, your customers, whoever that might be.”

Although a Talkshoplive broadcast goes largely one way, with audience engagement limited to real-time comments, celebrities can respond to their questions from the chat box during the livestream. The seasoned performers know what to do even when they can’t see the fans.

“Entertainers are dreamers, so it is easy to close your eyes and see faces,” Brooks said. “The beauty about getting to be an entertainer this long is you don’t have to imagine the faces. You just close your eyes and remember the faces … all of them … and the joy immediately hits you as an artist.”