Unwelcome in other countries, Americans are fleeing lockdowns and flocking to Mexico

The pandemic was raging, but on the beaches of Cabo San Lucas it felt like spring break.

Tipsy young Americans in bikinis and swim trunks vied for buckets of beer in a push-up competition at a crowded bar. Vendors in wide-brimmed hats plodded through the sand, offering rugs, massages and — under their breath — cocaine.

Down near the water, 24-year-old Kierston Jackson sat entwined with her boyfriend, their matching blue surgical masks a small concession to the coronavirus.

“It’s a good change of pace,” said Jackson, a Houston resident, as she gazed at the gently lapping waves. “I’d definitely prefer to be here with a mask on than in my home without one.”

Kierston Jackson, 24, traveled with her boyfriend to Cabo San Lucas from Houston.

Unwelcome in many countries as the virus surges worldwide, U.S. tourists are fleeing lockdowns at home and flocking to Mexico.

Nearly half a million Americans flew to Mexico in October — the most recent month for which data is available — mainly to beaches on the Pacific and Caribbean coasts.

That figure was down by a third compared to last October, but it was a minor drop-off compared to a more than 80% decline in visits from Canada and Europe.

The influx of Americans is a ray of hope for the country’s battered tourism sector, which has hemorrhaged more than $11 billion this year.

At the same time, travel from the United States appears to have contributed to an uptick in coronavirus cases and deaths in many tourism hot spots.

Mexico’s official death toll last week surpassed 113,000 — the fourth highest in the world — although officials say that many cases have gone undetected and that the true tally is likely double that.

Citing a “very high level of contagion,” the U.S. Centers for Disease Control and Prevention has cautioned against vacationing in Mexico.

But several travelers pointed out that the same warnings could apply to the United States. 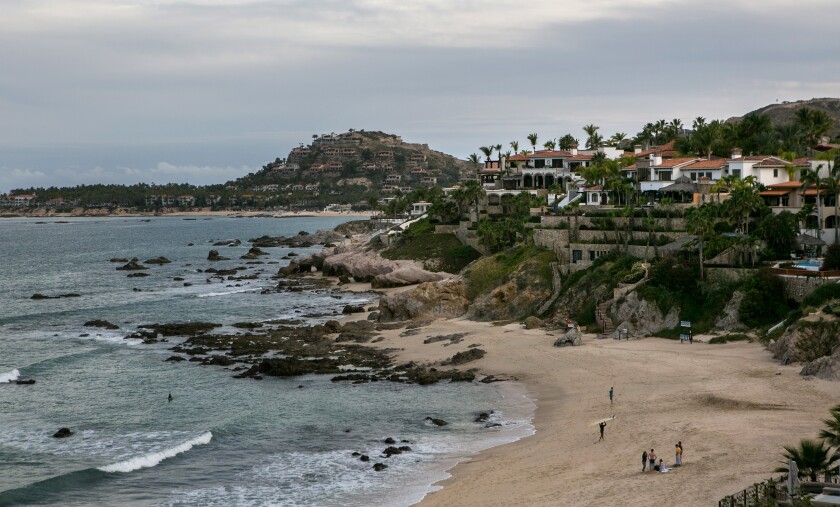 “I feel safer here than at home,” said Juan Castro, 45, a business owner from Carpinteria who was taking in the sunset with friends at a glitzy rooftop bar in San Jose del Cabo. They had spent the day fishing and were throwing back beers as a chef at the restaurant downstairs turned their catch into poke.

Castro said Mexico’s coronavirus protocols — which include temperature checks at the entrances to stores, hotels and restaurants — seemed better than those in California.

“I won’t go into an Albertsons in Carpinteria,” he said. “But I’ll come here.”

Unlike other parts of the world, Mexico does not require Americans to show proof of a negative COVID-19 test or undergo quarantine upon arrival.

In Los Cabos — the region that includes Cabo San Lucas, San Jose del Cabo and the 20 miles of beachfront resorts between them — the local tourism board persuaded authorities to enact some of the most stringent safety measures in the country.

The group successfully lobbied for a statewide lockdown that began April 1 and since it was lifted in June has paid for thousands of coronavirus tests for workers in the tourism industry. The state — Baja California Sur — now has the second highest test rate in the country.

Hotels are limited to 50% capacity, restaurants must close by midnight, and nightclubs and bars that don’t serve food remain shuttered. Authorities have penalized three hotels and seven restaurants for not adhering to the regulations, said Eric Santillán, head of the civil protection agency in Los Cabos.

Tourism officials have stressed the safety measures in their advertising campaigns while highlighting the region’s expansive deserts and vast coastlines. 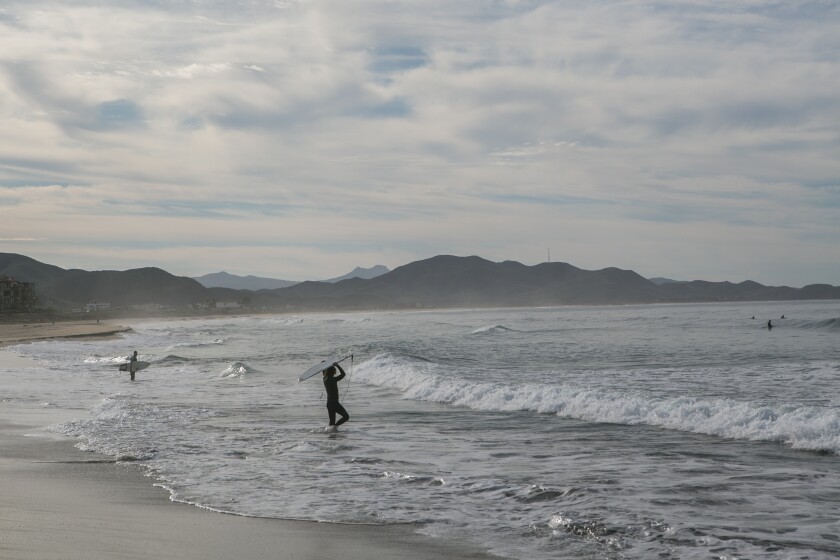 A beach in Baja California Sur.

“Remember your mask,” one commercial says as a woman snorkels with fish. “Practice social distancing,” it declares as a man drifts alone on a surfboard.

The efforts have helped limit their losses: Since June, tourism in Los Cabos has performed far better than expected, with 21,000 jobs added between August and September.

The comeback has been a huge relief in a state where 80% of jobs depend directly or indirectly on the industry. During the lockdown, food banks struggled to keep up with demand from out-of-work cooks, drivers and housekeepers.

But the reopening has come at a price.

Coronavirus cases in the state spiked as soon as planeloads of tourists began arriving, with the weekly tally soaring from under 300 to a high of 802 during the first week in August. 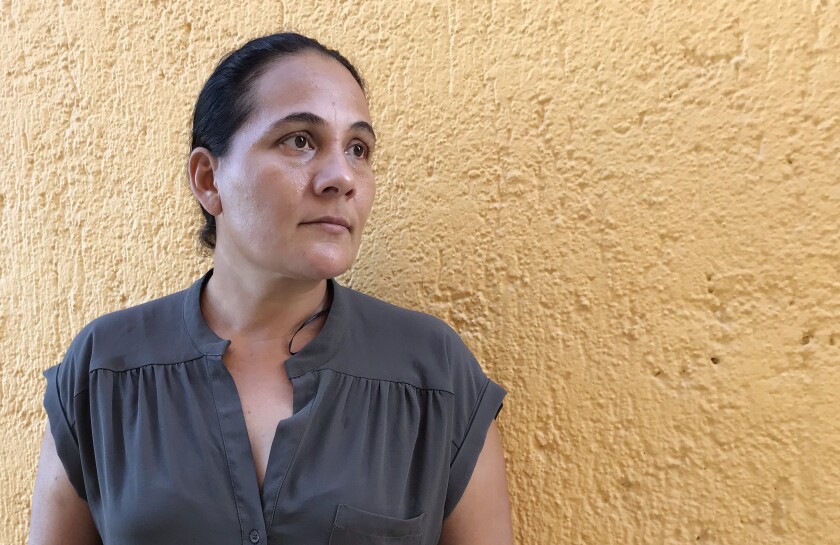 Valeria Muñoz of Los Cabos lost her husband, Armando Covarrubias, to COVID-19 in late November amid a burst of international tourism.

Valeria Muñoz at first celebrated when the lockdown was lifted.

She and her husband, with whom she ran a horseback-riding business in Cabo San Lucas, had been living on savings for months, at times struggling to feed their 15 horses and even their two teenage sons.

Muñoz returned to work alone because her husband, Armando Covarrubias, had hypertension and was especially vulnerable if he contracted the virus.

Several times a week, Muñoz picked up groups of tourists at their hotels and drove them to the stables. She said the travelers — who came from the United States and Mexico — always wore masks when she arrived, but often removed them in the car. 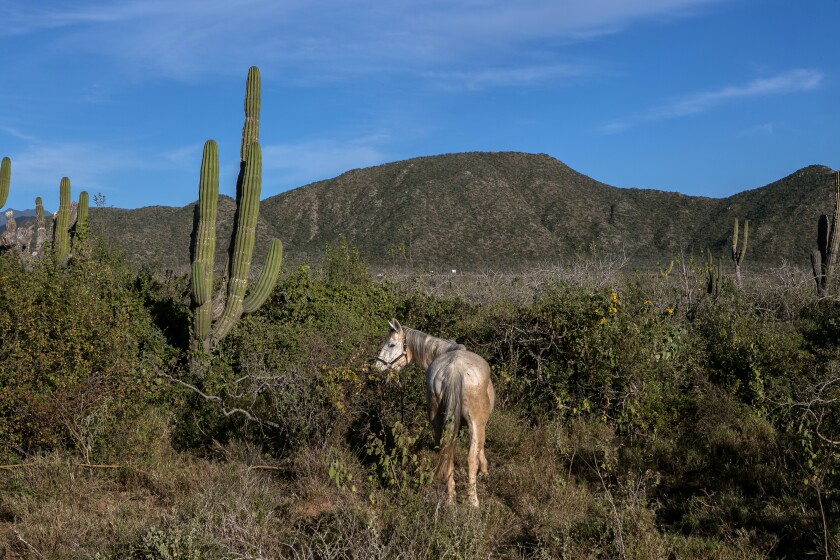 A horse eats wild brush off the roadside in Baja California Sur.

“Take yours off,” she remembered one man urging her. “We’re fine.”

She contracted the coronavirus in October. Soon after, her husband fell ill. He battled the virus for more than a month, but died in November at age 61.

The statewide death toll officially stands at 735. Infections have come down — there were 513 cases the week after Thanksgiving — and at least for now appear to have stabilized.

As for tourists spreading the virus, authorities have documented cases in which infected travelers have arrived in Canada on flights from Cancun and Puerto Vallarta.

And a four-day art and music festival held in the Caribbean resort of Tulum in mid-November resulted in dozens if not hundreds of infections, many of which were detected by doctors in New York and Miami.

“The protocols work,” said John Kirwan, general director of the Fiesta Americana hotel, a sprawling compound of orange villas perched along the Pacific.

Guests are required to wear masks in public areas, unless they’re eating or drinking. The hotel has removed tables from restaurants so they are spaced far apart.

Kirwan said that a small number of sick employees had been identified by thermometer checks while boarding buses that take them to work but that he is not aware of any guests who have been infected with the coronavirus during their stays.

Los Cabos tourism officials say the demographics of those visiting the region have changed in ways that reduce the risks.

People are traveling in smaller groups than in the past and are more likely to spend money on private excursions. Private jet travel has increased nearly 140% over last year. And there are fewer travelers over 60 now, and more between the ages of 30 and 50.

Alex Laugalis, 33, a Canadian who lives in Wisconsin, rose just after sunrise on a recent morning to haul a cooler onto a rented boat for a day of fishing on the placid Gulf of California.

Laugalis said he had recently traveled to Canada, where he was required to stay at home under a mandatory 14-day quarantine.

In Mexico, he strolled off the plane, had his temperature taken and was free to go. Los Cabos was the same as always, he said, “just with a mask.”

“Whether you go to a Walmart in your hometown or here it’s pretty much the same,” he said.

His social media habits are a different story. Knowing that travel during the pandemic might raise some eyebrows among acquaintances, “you don’t post too much,” he said.

In a recent social media shaming scandal, Steve Adler, the mayor of Austin, Texas, did not escape such judgments.

Last month, Adler posted a video to Facebook urging his constituents not to travel. It turned out he had filmed it while on vacation in Cabo San Lucas.