In Mexican stores across Los Angeles, huaraches are a common sight. Wander down Olvera Street in downtown L.A. or visit Boyle Heights, and you’ll see the cherished sandals in all their hues, styles and sizes dangling by strings or lining shelves at shoe stands. In these neighborhoods, particularly before the coronavirus pandemic shifted the city’s retail scene, you’d find generations of huarache makers.

Maria Silva is one of them. For the last 23 years, she sold huaraches and other handcrafted Mexican footwear in her shop Mas Sport inside Boyle Heights’ El Mercado de Los Angeles.

Silva’s grandparents honed the craft in their hometown, Sahuayo, Mexico, where her mother also learned to make huaraches. When Silva and her siblings were older, they too got involved in the business.

Silva, now 49, spent her childhood in Sahuayo painting and polishing huaraches in her family’s shoe shop. “When there was a lot of work, I’d sand the sole with a machine so it wouldn’t have deformities,” she said in Spanish, pulling a brightly hued shoe from the wall of her store during a visit late last year. Growing up, she would clean, package and stuff the sandals with newspapers to prevent damage.

Maria Silva at her store inside El Mercado de Los Angeles, where she sold her family’s handmade huaraches. Silva and her siblings grew up in Mexico making huaraches.

When she started selling huaraches in Los Angeles years ago, they became a source of cultural pride for her. “It brings me a lot of happiness because now it’s not just Hispanics who buy them,” she said.

Her clientele has grown to include Black and white people, Filipinos and tourists from around the globe. “I feel happy because every day the tradition is continuing.”

Amid the COVID-19 pandemic, the huaraches have also been life-saving. “A small business owner like me relies on the day-to-day sales,” said Silva recently. “We don’t have the finances to survive a situation like this. The truth is, sales dropped significantly. … But right now, gracias a Dios, what’s really helping is the huarache.” 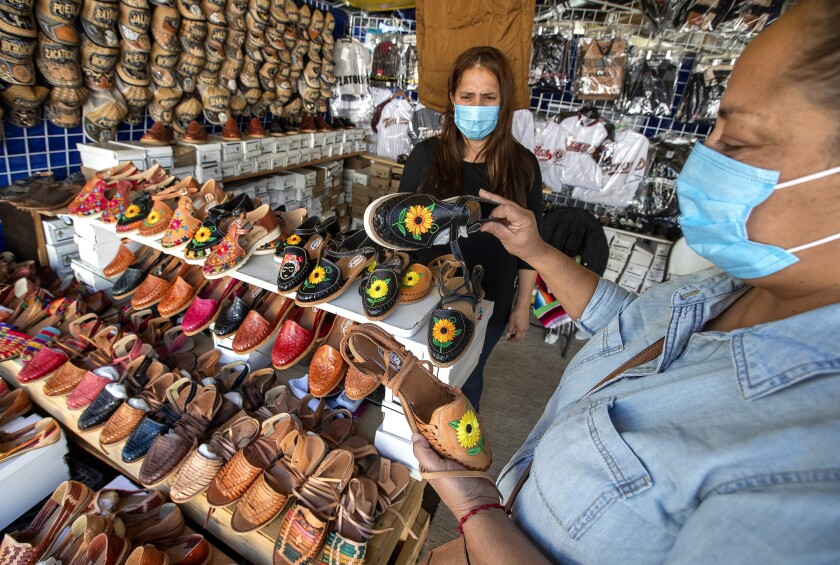 Forced to close her shop for five months this year, during which she received zero federal financial assistance, Silva has resorted to selling the sandals in El Mercado’s parking lot — where vendors had been given the green light to reopen their businesses in late August. At the time, that meant no more of the tennis shoes, sports attire and other items that Silva also sold.

As tough as these pandemic times have been for retailers, the businesswoman said she has enjoyed working at the outdoor space. “I like it more. It looks welcoming and feels comfortable and looks really nice,” she said. “Te recuerda a tu pueblo.” It reminds her of her hometown.

The Mexican huarache dates back to the pre-Columbian era, and has been traced to the rural communities of Yucatan, Michoacan, Guanajuato and Jalisco. Every region in Mexico specializes in different huarache styles. Variations are influenced by an area’s terrain and climate.

Flexible, narrow strips of leather that are interwoven and often dyed with bright, vivid paints are a recognizable huarache design. There are heeled and stamped huaraches; others have a longer strip near the ankle to wrap around the calf; and many feature a woven diamond shape up front. There’s the classic El Pachuco, considered among the more complicated huarache designs. Others are ideal for campesinos. Some are softer or more durable. They can be buckled on, laced or slipped into. 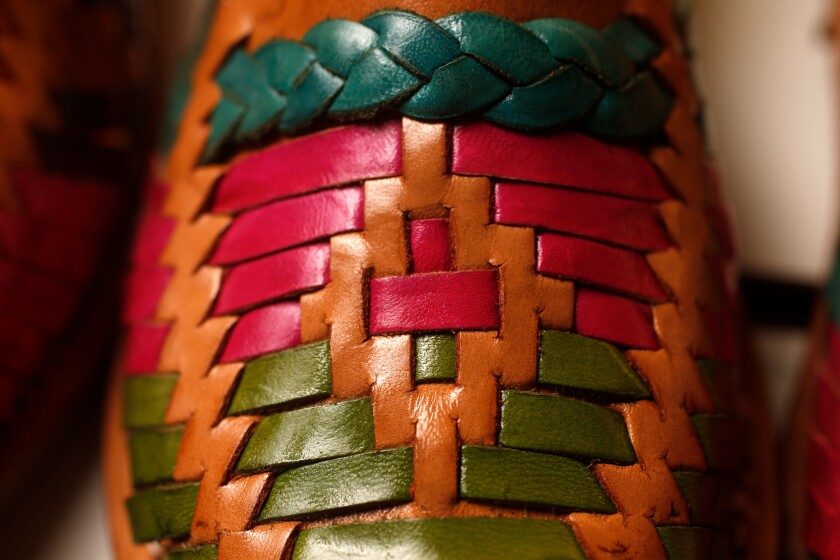 A detail of a huarache made by Maria Silva and her family.

Once mostly associated with Mexico’s farm workers, the huarache gained prominence in the U.S. in the 1960s as hippies and surfers adopted the shoe as part of their chill, lackadaisical lifestyle. (Even the Beach Boys sang about them in their ’60s hit “Surfin’ U.S.A.”) The sandals have grown more popular through the years, and can now be found at weekend flea markets, retail stores and countless online sites.

Brands and retailers such as Quiksilver and Urban Outfitters have picked up on the huaraches’ popularity, selling pairs for about $63 and $100, respectively, sometimes more. Nike capitalized on the trendy footwear in 1991 and released the sneaker Air Huarache. Small independent stores in Los Angeles also have tapped into the market. 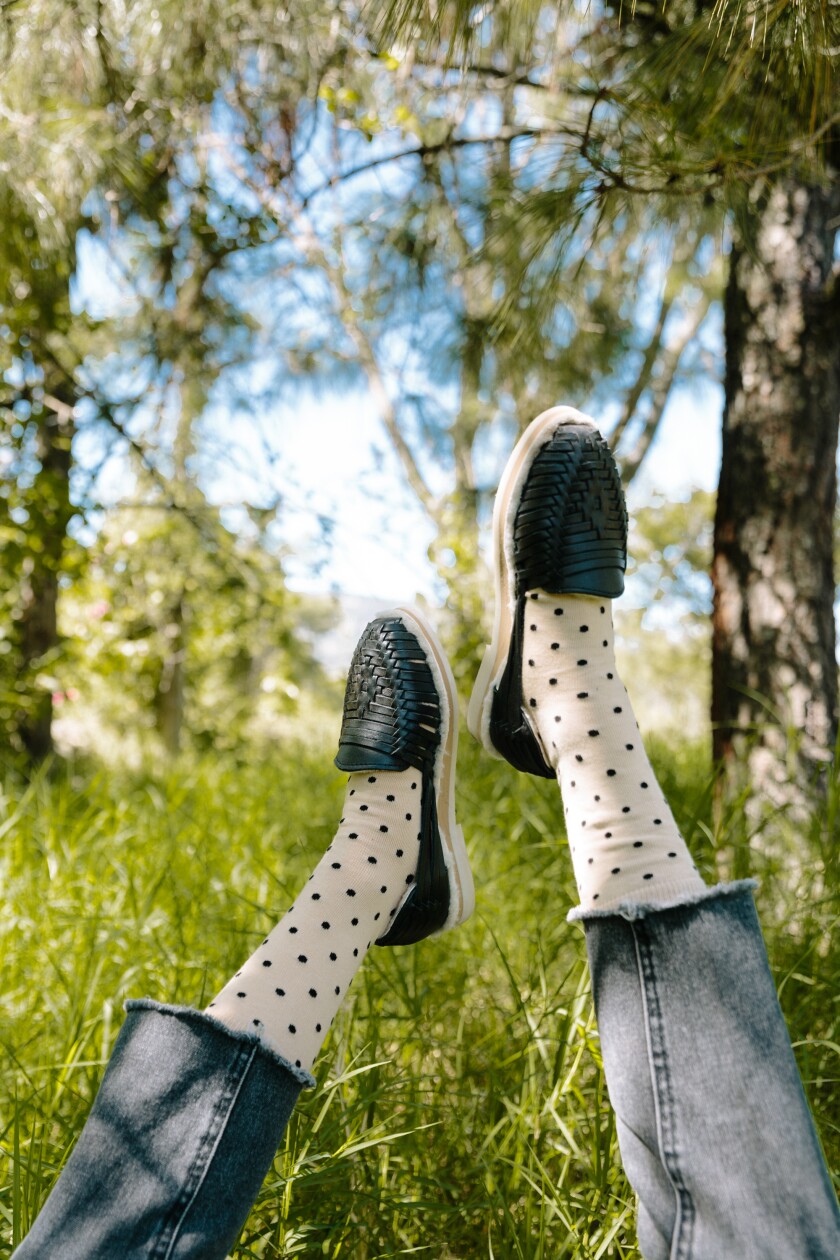 Years ago when Francisco Alvarez and Oscar Yapor returned to Denver from a trip to Michoacan, Mexico, the life-long best friends didn’t think much of the classic huaraches they brought back with them.

However, on the streets, friends and local strangers ogled the brown handmade leather sandals they purchased from a woman in an artisan market. “Where did you get those?” they’d hear from people who pointed at the huaraches on their feet.

Suddenly the sandals looked a little different to the Chihuahua, Mexico, natives. So Alvarez and Yapor, both 27, decided to try their hand at filling the city’s demand. They bought their first batch of huaraches — about 100 — from the huarachera in Sahuayo, a city nicknamed Ciudad de los Huaraches, and sold them in artisan markets around Denver.

They were an instant hit.

“Within three or four months, we kind of realized that this was probably more successful than we had hoped,” Yapor said. “This was just a side gig for us that we were doing on weekends to pretty much pay school debt from college.”

It turned out to be much bigger than that. Alvarez, an architect, and Yapor, an industrial engineer, ditched their fields of study to become businessmen, and moved to Los Angeles.

As their business grew, they opened an airy, colorful storefront in Echo Park for their brand Espiritu. After a trial run as a retail store, they decided their brand would best thrive online, so they closed shop last December.

They’ve continued to sell their sandals on their website starting at $85 a pair. In January, the duo opened a warehouse in downtown L.A. for storage and daily operation needs.

Every huarache Espiritu sells is handmade in Sahuayo. Through a partnership with Mexico’s government, the business offers women escaping dire circumstances a chance to get back on their feet with jobs helping make sandals. 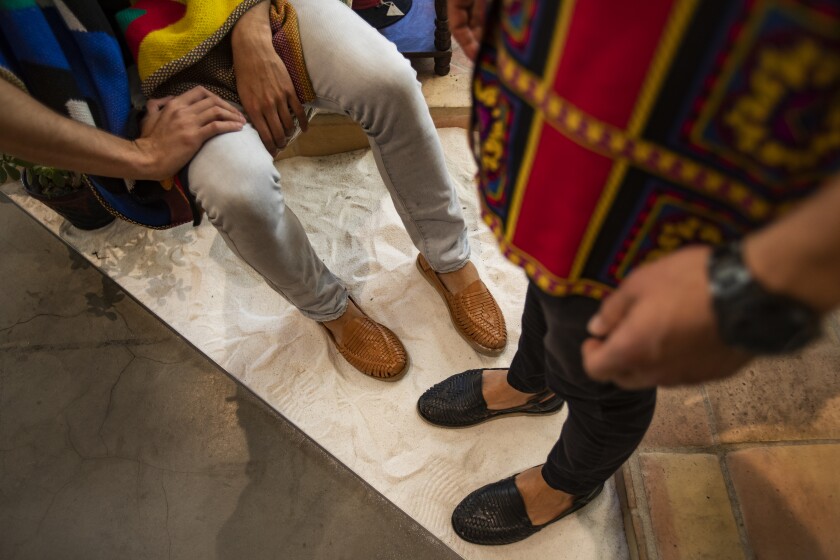 A closer look at the Mexican huaraches worn by Francisco Alvarez, left, and Oscar Yapor.

“Our artisans teach them how to do this so that we can pretty much give them an immediate job as soon as they get out of jail, rehab or homelessness,” Yapor said. Immigrants and domestic violence survivors also walk through their doors.

Unlike retailers without an e-commerce platform, Espiritu has grown in sales during the pandemic. “People started browsing a little bit more for comfort” and searching for huaraches while quarantined at home, Yapor said. “We started targeting the right customers and were able to expand our sales online. A lot of the energy we were spending into going to flea markets, we were able to devote to online and create more inventory.”

But the businessmen were not spared pandemic-induced hardships. For two months they closed their manufacturing facilities in Sahuayo, which saw an outbreak of coronavirus infections. Still, they managed to continue paying wages and salaries, Yapor said. They were forced to work with the inventory they had and find a way to create online trade orders so they could continue selling huaraches. 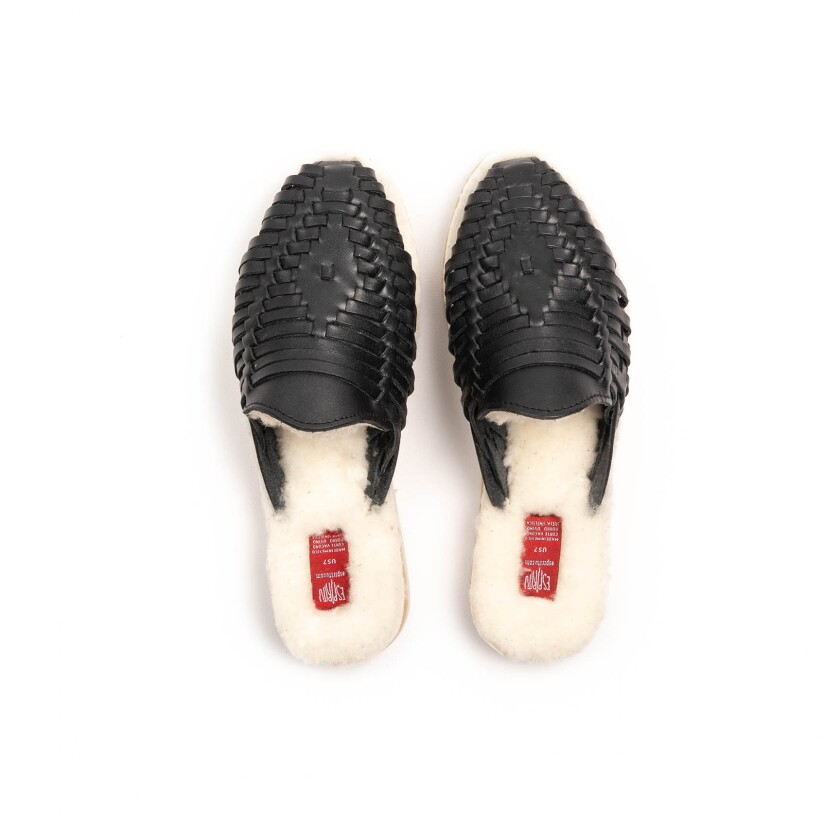 Now, Espiritu is thriving. Alvarez and Yapor launched a blog and pastel-colored huaraches to appeal to younger customers around June. A men’s and women’s winter line of huaraches with sheepskin lining is available on their site for $139 and $149 per pair, and their recent collaborations with mega brands Topo Chico and Tapatío are a clear indicator of Alvarez and Yapor’s booming huarache business.

Making huaraches is a laborious and time-consuming task. Just ask artist Pilar Agüero-Esparza, who grew up watching her father make them in East Los Angeles.

Agüero-Esparza spent many summers and after-school hours watching her parents make huaraches from scratch out of their tiny Boyle Heights store. When she and her siblings got older, they were tasked with sanding and polishing the shoes and painting their edges.

As their huaraches grew more popular, they started selling them at flea markets, Agüero-Esparza said. “On Saturdays they would take us [to El Monte flea market], we’d set up the puesto [market stall], and they’d pick us up at 4 o’clock,” she said. “And my sisters and my brother would be there selling the huaraches.” 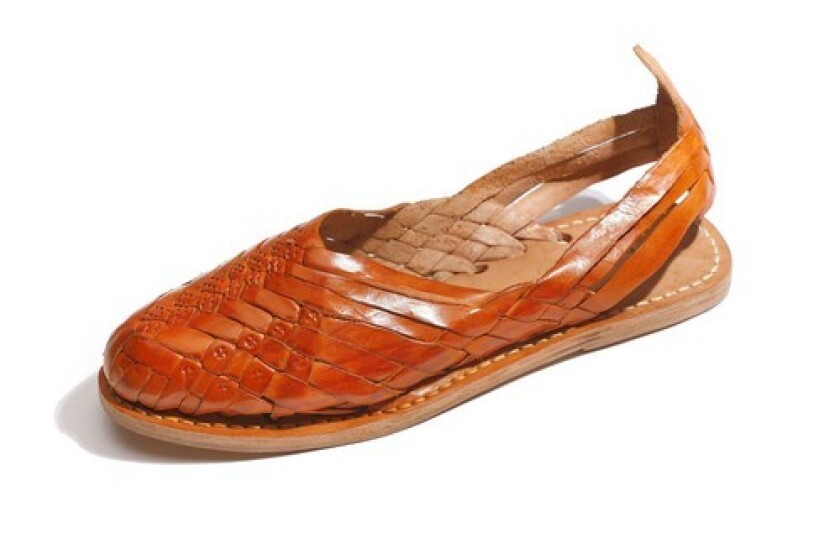 Her father, who came to the U.S. as a teenager, was a third-generation huarachero, but it was his shoe repair shop that inspired him to return to the craft. “Through the years, that was kind of a slow business, so he decided like, ‘What can I make?’ And that’s when he decided, ‘Hey, I can make huaraches.’”

On a personal level, making huaraches was a source of pride for her father; it was his way of connecting to his culture and easing his homesickness, she said. “He could see where people could connect with Mexico, with this immigrant experience.”

Since her father’s death years ago, Agüero-Esparza has kept the craft and tradition alive; she has had huarache-making workshops all over the world. “It’s something that’s close to my heart,” she said, “being able to make shoes.”

Weighing in at 1.5 pounds a shoe, Moreno’s beloved sandals are made of old tire rubber, thick leather and nails. He bought them about two decades ago in a mercado in Oaxaca City. They’re older than his children, he said, and when he wears them, they feel “like a summer traveling companion that visits after the final thaw.” Cesáreo Moreno purchased these “indestructible” huaraches at least 18 years ago in Oaxaca City. They’re older than his children, he says, and each shoe weighs about 1.5 pounds.

It’s a shoe that is “quintessentially Mexican … a humble icon of mestizaje that are beloved and overlooked at the same time,” he said.

He suspects the mushrooming huarache popularity is rooted in a longing for the past.

“So many things that get popular within Mexican American culture is nostalgia,” he said. “It’s the ability to wear something that aligns with your identity in a way that makes you feel proud of it and makes you think of your ancestors and their legacy.”

Every time he puts on his huaraches and meets someone from Mexico, it’s usually the first thing they comment on, he said. “People have fallen in love with this old-style shoe.”