Motorists facing record high petrol prices from this month will be helped to drive more economically thanks to a new feature in Google’s mapping app.

Visiting Disneyland during holidays? Use Genie Plus app

The introduction of ‘eco-friendly routing’ to its Maps navigation system will provide drivers with an alternative to the fastest and most direct route with the option of one that’s best for the environment.

While it promises to cut your carbon footprint and save you on fuel bills, the greener directions will take longer, delaying the quickest estimated arrival time.

A second eco-focussed app is a new in-car system launched by Volvo for its latest EVs, which will provides live advice on driving style from an efficiency perspective.

Google Maps to offer eco-friendly route option: From 2022, UK drivers will be told if they can take a different route to their destination that’s longer but also reduces their carbon footprint

Google’s new nav option has been launched in the US for both Android and Apple users and is set to be made available in the UK in 2022.

Currently, when users of the popular app set a desired destination, the mapping system offers the fastest route based on live traffic data – and alternative options that might not necessarily be the quickest.

However, its new ‘eco-friendly routing’ tool will provide motorists with another choice – a path that is estimated to use the least amount of fuel, or electricity if you’re driving an EV.

Google says that the system uses both artificial intelligence and insights from the Energy’s National Renewable Energy Laboratory (NREL) to calculate the most efficient journey.

The result is a far more complex and accurate algorithm than used for the ‘eco route’ in built-in sat-nav systems in the latest cars, which solely rely on live traffic data to understand where congestion might cause stop-start journeys.

Google’s version takes into consideration up-to-date traffic levels but then also looks at routes with the fewest hills, corners and traffic lights that mitigate the need to slow down and accelerate repeatedly – something that increases fuel use.

If the most efficient route is the same as the quickest motorists will only be offered the one option. However, if the more eco-friendly option takes longer, they will be given a choice.

Fuel savings, the difference in carbon impact and the additional time taken to complete a journey will be pre-displayed so motorists can make an informed decision about driving the least-polluting route or not before setting off.

Users can also choose to disable the eco-friendly route function if they decide they don’t want it to be an option.

Google estimates that its introduction has the potential to save around one million tonnes of carbon dioxide emissions from transport every year – the equivalent of removing 200,000 cars from the roads – as well as saving drivers money by not having to fill up as often, especially with average petrol prices set to hit record highs before the end of this month and increase towards Christmas. 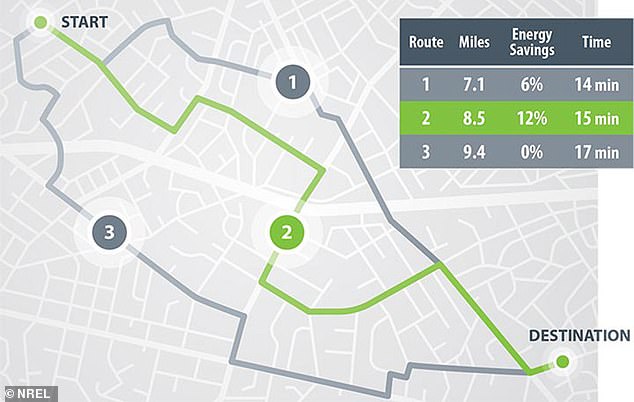 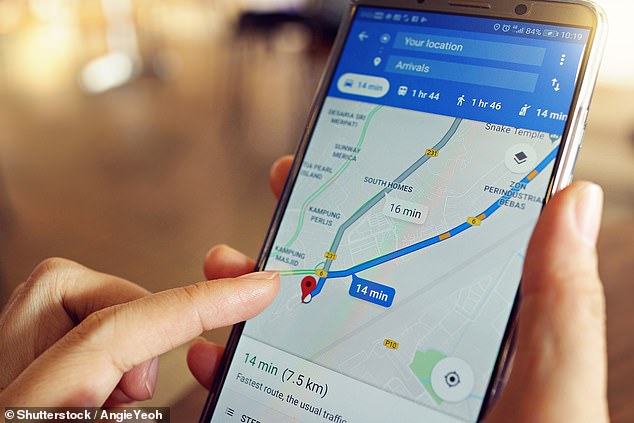 Fuel savings, the difference in carbon impact and the additional time taken to complete a journey will be displayed so motorists can make an informed decision about driving the least-polluting route or not

Jeff Gonder from NREL, said: ‘Not only does Google Maps’ eco-friendly routing bring NREL’s fuel-efficient technology from the lab to the road, but it has huge potential to significantly lower emissions and save drivers money — something that’s good for both people and the planet.’

The eco-friendly routing update is one of a number of updates to the Maps app, which also includes a new features for cyclists and information on bike and scooter sharing schemes around the world.

A ‘lite’ navigation function allows cyclists to quickly see important details about their route such as trip progress and estimated arrival time without needing to keep their screen on or enter turn-by-turn navigation.

Owners of Volvo’s £48,300 XC40 Recharge and £57,400 C40 Recharge will soon have access to a new app that will coach them on how to drive more efficiently while they’re behind the wheel.

The Range Assistant app helps drivers keep track of the car’s available range and optimise it through smart energy management and ‘advice on driving style from an efficiency perspective’.

It is due to be released in ‘beta’ version imminently as an over-the-air software update via the Android Automotive OS infotainment system. 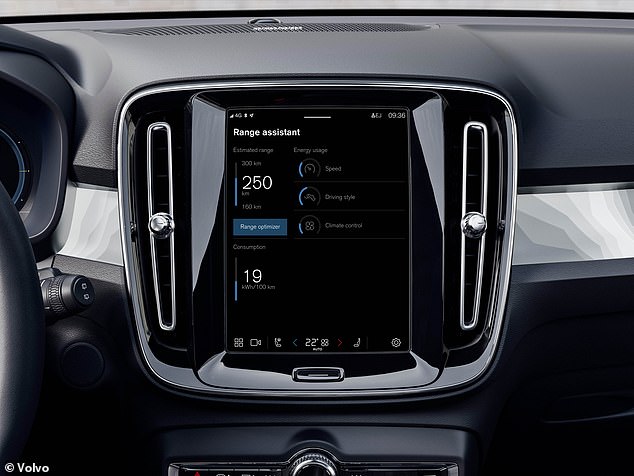 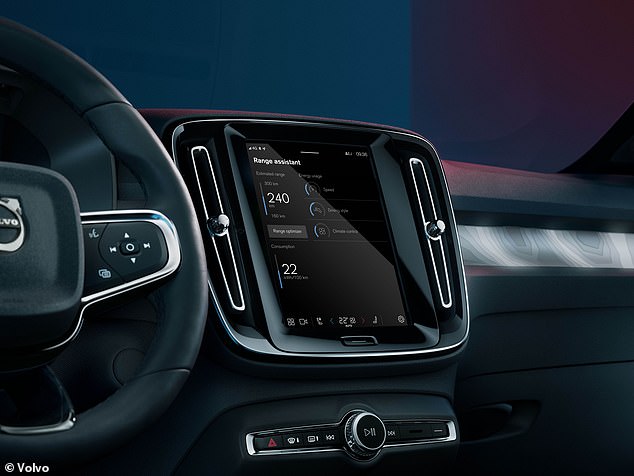 ‘With the app, embedded seamlessly in the Android-powered infotainment system, drivers of fully electric Volvo cars get a clear and accurate indication of the estimated remaining driving range and real-time energy consumption.

‘It also helps them understand the key factors that affect their driving range,’ the brand says.

‘A range optimiser functionality in the app can adjust the climate system automatically to improve driving range, a feature that will be especially helpful on longer trips because it reduces the need for charging stops.’

The full release version will also provide coaching to drivers with ‘smart and easy-to-follow recommendations on how to adjust their driving style and speed to maximise the car’s range’.

The roll-out of the software update is planned to start immediately, with all applicable models expected to be updated by the end of October.

SAVE MONEY ON MOTORING

Some links in this article may be affiliate links. If you click on them we may earn a small commission. That helps us fund This Is Money, and keep it free to use. We do not write articles to promote products. We do not allow any commercial relationship to affect our editorial independence.