This year Halloween and Día de Los Muertos carry a different sort of resonance after 18 months of the pandemic, with Southern California full of holiday events, many of which were canceled or virtual last year.

Here’s a sampling of seasonal shows and displays as well as a roundup of activities at a trio of theme parks. (Note that L.A. County mandates masks — covering your nose and mouth — in indoor public settings for visitors 2 or older, and businesses may choose to require masks indoors as well.)

Beware the Dark Realm in Santa Clarita is a free “home haunt” designed to raise money for the nonprofit Family Promise of Santa Clarita. It runs 7 -10 p.m. Fridays and Saturdays through Oct. 30. The Sivley family, which stages the all-ages event, calls it a “high intensity, walkthrough attraction filled with terrifying live monsters, amazing special effects and incredible sets.” (The monsters won’t touch you.) A $10 donation is recommended. 28621 Sugar Pine Way, Santa Clarita. bewarethedarkrealm.com

Cal Poly Pomona Pumpkin Fest: This tradition returns from 10 a.m. to 8 p.m. on weekends and 3 to 8 p.m. Wednesdays through Fridays. This year’s pumpkin patch will feature 30,000 Cal Poly-grown pumpkins for $5 to $7 each, plus farm demonstrations, live entertainment, food and a variety of activities at Cal Poly Pomona’s AGRIscapes Center. Activities include hayrides, a corn maze, a sunflower patch, a petting farm (featuring Oreo, the celebrity lamb named last year in a popular contest), the new “Moo Moo Cow Train,” pulled by an antique tractor, and a farmers market with campus-grown agricultural items, crafts and snacks. The Insect Fair will not be held this year due to COVID restrictions. Admission is free on Wednesdays and Thursdays, but visitors must register online. On Fridays, admission is $5 for adults and $4 for seniors, children 3-12 and anyone with a Cal Poly Pomona ID. Weekend tickets are $8 and $6. Wristbands offering unlimited access to activities are $14 on weekends and $8 on Fridays. Proceeds support the school’s Huntley College of Agriculture’s farm operations, student clubs and outreach activities. 4102 S. University Drive, Pomona. cpp.edu

Cemetery Lane at the Heritage Square Museum in Los Angeles promises “spooky but safe” trick-or-treating among the museum’s eight restored Victorian homes and several other stops. The attraction runs Oct. 27-31. Tickets are $25-$30. Organizers say that “while intended for all ages, the event is less scary during our daytime hours and gets spookier as the night goes on.” 3800 Homer St., Los Angeles. cemeterylane.com

Descanso Gardens: In the evenings from Oct. 11-31, the gardens will offer “Carved,” which features hundreds of sculpted pumpkins as well as other items made of natural materials along a mile-long path through the Camellia Forest and Oak Grove. Other features include a house made of pumpkins and a hay maze. The event is 6:30 p.m. to 10 p.m. nightly, with timed admission. General admission is $32-35 for non-members. 1418 Descanso Drive, La Cañada Flintridge. descansogardens.org 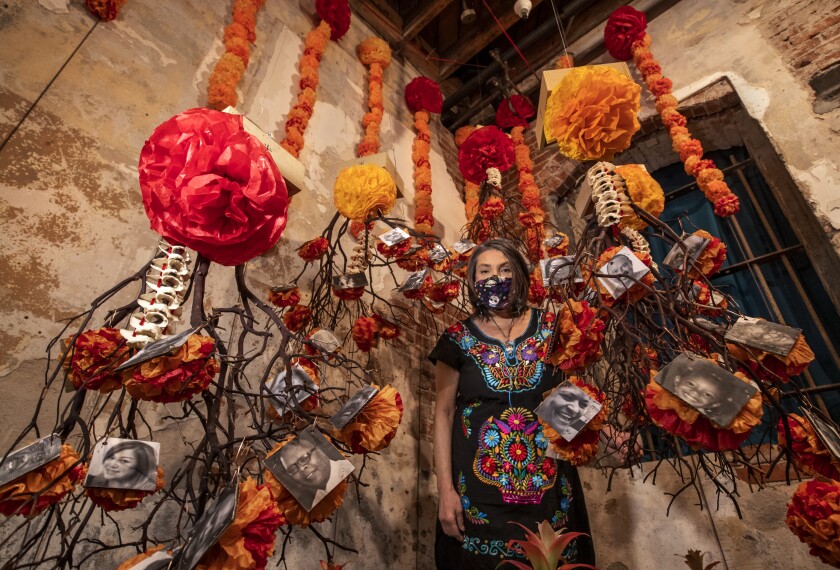 Consuelo G. Flores designed an altar called “The Roots Of All Resistance” for a 2020 Día De Los Muertos exhibition at Self Help Graphics & Art in Los Angeles.

Grand Park: This green space in downtown L.A. pays tribute to Día de los Muertos with a public art installation from Oct. 22 to Nov. 2. The display, presented in partnership with Self Help Graphics & Art, will include more than 20 altars created by local artists and organizations, including a community altar designed by the National Endowment for the Arts’ 2018 National Heritage Fellow Ofelia Esparza. From 7 to 9 p.m. Oct. 23, the park will host a Noche de Ofrenda (Night of the Offerings) with dance performances and calavera (skull) art workshops led by the Los Angeles County Museum of Art for all ages. 200 N. Grand Ave., Los Angeles. grandparkla.org

Griffith Park: Haunted Hayride, a return attraction, is focused on an area transformed into the town square of Midnight Falls. For the hayride alone, admission begins at $29.99. For access to the hayride, trick or treat, Midnight Mortuary and Dead End Diner area, the cost is $39.99. (There are VIP and Platinum options, too, which promise shorter wait times.) Bear in mind, parents and vegetarians, that the Dead End Diner includes overtones of cannibalism, and organizers warn that the event “may be too intense for children 12 and under.” 4730 Crystal Springs Dr., Los Angeles. losangeleshauntedhayride.com

Los Angeles Zoo: Boo at the L.A. Zoo is running every day in October, with photo opportunities, trick-or-treat candy stations, “spook-tacular” science demonstrations, an extinct-animal graveyard and weekend pumpkin feedings and other activities, mostly between 10 a.m. and 4 p.m. All activities are included in the zoo’s usual price of admission ($22 for adults and $17 for children ages 2-12). Trick-or-treating will happen Oct. 23, 24, 30 and 31. Costumes are allowed for children or adults on those day, so long as you avoid “full face masks, weapons, obscenity or anything that could cause disturbance to either patrons or animals.” And which animals will be eating pumpkins? A black bear, a tortoise, meerkats, otters, elephants, hogs, hippos, jaguars, cassowaries, snow leopards, flamingos, piranhas, peccaries and howler monkeys. 5333 Zoo Drive, Los Angeles. lazoo.org 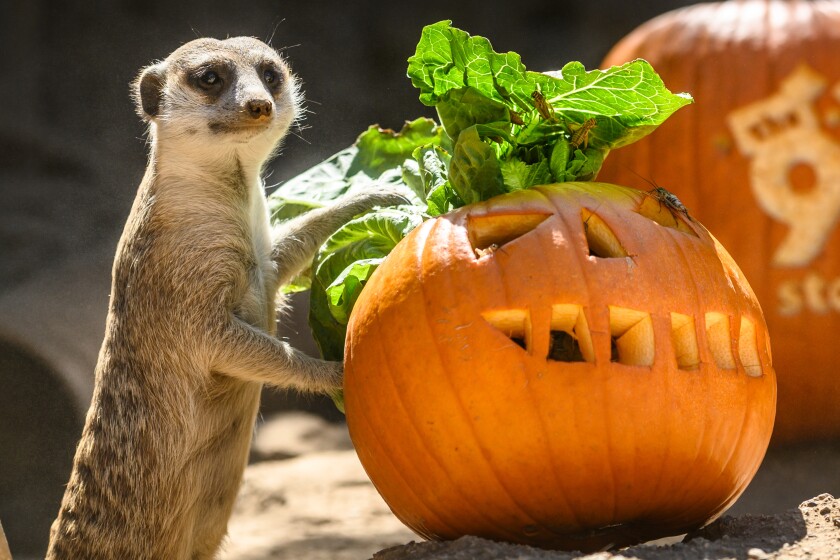 A meerkat with a pumpkin at the L.A. Zoo, which is offering plenty of Halloween fun this year.

Underwood Family Farms: This Moorpark farm, which leans toward pumpkins and away from horror, has filled its October with Fall Harvest on the Farm events, beginning with a big pumpkin patch. Among the weekend features: a tractor-drawn wagon ride, corn maze and labyrinth, pig races, live entertainment, access to pick-your-own field, hay pyramids, a chicken show and slides. General admission is $10 on weekdays, $16-$22 on weekends. Weekend themes include Antique Tractors (Oct. 16-17), the Wild West (Oct. 23-24) and all About Pumpkins (Oct. 30-31). 3370 Sunset Valley Road, Moorpark. underwoodfamilyfarms.com

Witchy Architecture Tours: A team of architectural preservationists has come up with a free, family-friendly driving tour of L.A. “witches’ houses,” including castles, cottages and other structures fit for a fairytale or ghost story. The list will be posted as a free download Oct. 13 by Friends of Residential Treasures: LA (FORT: LA), and this year’s itinerary covers five structures chosen by actor Amber Benson (who co-starred in the series “Buffy the Vampire Slayer”) including buildings in Hollywood, Los Feliz and West Hollywood. The group has also recorded actors reading bits of “Grimms’ Fairy Tale” passages, so you can listen while you drive. fortla.org 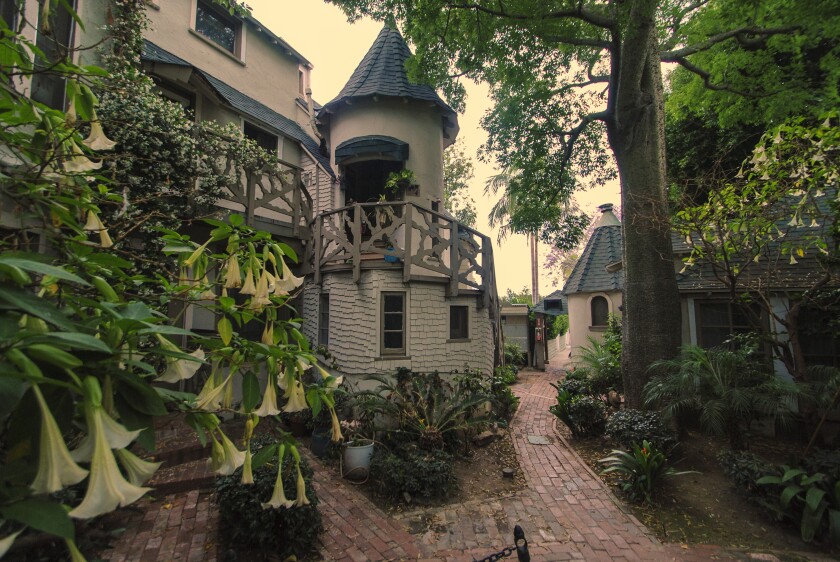 A look at Normandie Towers in West Hollywood. The apartments have been featured in the Witchy Architecture Tours.

Knott’s Scary Farm is basically a seasonal transformation of Knott’s Berry Farm in Buena Park. Since the 1970s, the park has been adding mazes, themed shows, evil clowns on the Boardwalk, “boo-fet” dinners and “more than 1,000 horrifying creatures lurking in the fog and hiding in every corner of the park.” The spectacle is not recommended for children under 13. Open selected nights (including Thursday-Sunday) from 7 p.m. to 1 a.m. or 2 a.m. through Oct. 31, depending on the night. Tickets are $53 and up. Parking is $25. (Knott’s Spooky Farm, staged Saturdays and Sundays through Oct. 31, aims for ages 3-11. It’s part of the regular park admission price.) 8039 Beach Blvd., Buena Park. knotts.com

Universal Studios Hollywood has brought back its Halloween Horror Nights, which lean toward spookiness and carry a general admission price tag of $69-$102. A Terror Tram is promised, along with scream-filled Scare Zones. Universal warns that the “intense” presentation “is not recommended for children under the age of 13. No costumes or costume masks allowed.” 100 Universal City Plaza, Universal City. universalstudioshollywood.com

Is confidence a cult? These sociologists think so.