In an endlessly depressing year, tie-dye gave us a reason to smile

It was a decade ago that designer Paige Mycoskie first included tie-dye as part of her Los Angeles-based brand Aviator Nation to sell at a booth at a music festival. That initial batch — 500 T-shirts and tank tops — she dyed by hand, letting them dry in the sun, strewn around her backyard.

“I think my neighbors thought I was crazy,” she said. However, it was worth it: Most of the pieces sold. (She held back on certain items because she loved them too much to part with them.) Since then, tie-dye has remained a popular part of Mycoskie’s collection of relaxed hoodies and sweats that typify Southern California’s laid-back, retro-leaning aesthetic.

Based on its visual appeal, tie-dye, which has popped up in abundance this year, offers a sunny sartorial alternative.

“I think tie-dye can be nostalgic for some people, and I think nostalgia is comforting,” Mycoskie said. “When you can wear clothing that reminds you of days past, it makes you feel good.”

And we need to feel good right now. This year has been a laundry list of bad news: a raging pandemic, escalating racial tensions, a faltering economy, wildfires brought on by a warming planet and a contentious election, to name some of the pressing issues facing the country.

The fanciful pattern is nothing new in certain corners of the high-fashion world. Luxury brands such as Prada, Gabriela Hearst, Proenza Schouler and L.A.-based the Elder Statesman have all featured tie-dye in recent collections, but this year has been an inflection point.

Capsule collections from Loewe and Paco Rabanne have featured the psychedelic motif, while Tiedyen4Biden, an Instagram profile that sold tie-dyed Joe Biden merchandise, raised more than $100,000 for the now-president-elect’s campaign. Tie-dye meshes easily with the cozy-core sweats that have gained traction during the COVID-19 pandemic, and celebrities such as Hailey and Justin Bieber, Jennifer Lopez, Dua Lipa and Bella Hadid have all embraced the results of these ancient resist-dyeing techniques.

“During the pandemic, tie-dye has taken on a whole new significance,” said Michael Fisher, vice president and creative director at the trend forecasting agency Fashion Snoops. “Many consumers have sought at-home rituals that have equal parts chaos and order, from gardening and baking to making our own tie-dye. It was by far the top seller for most retailers since last spring. It became a part of the official COVID-19 uniform as cozy sweats did.”

As the world faced COVID-related closures in the spring and we found ourselves suddenly homebound, leisure activities built around handicrafts of yore experienced a resurgence. “Most days felt like Groundhog Day to many of us,” Fisher said. “And so crafting just became an evolved part of self-care.”

Last month, the brand Alex Mill released a limited-edition collection of tie-dyed cashmere sweaters and beanies, a way to reinvent overstock products from seasons past. “Our special dye programs actually started a year before COVID, but this year has put an exclamation mark next to the whole idea,” said Somsack Sikhounmuong, the brand’s cofounder and creative director. 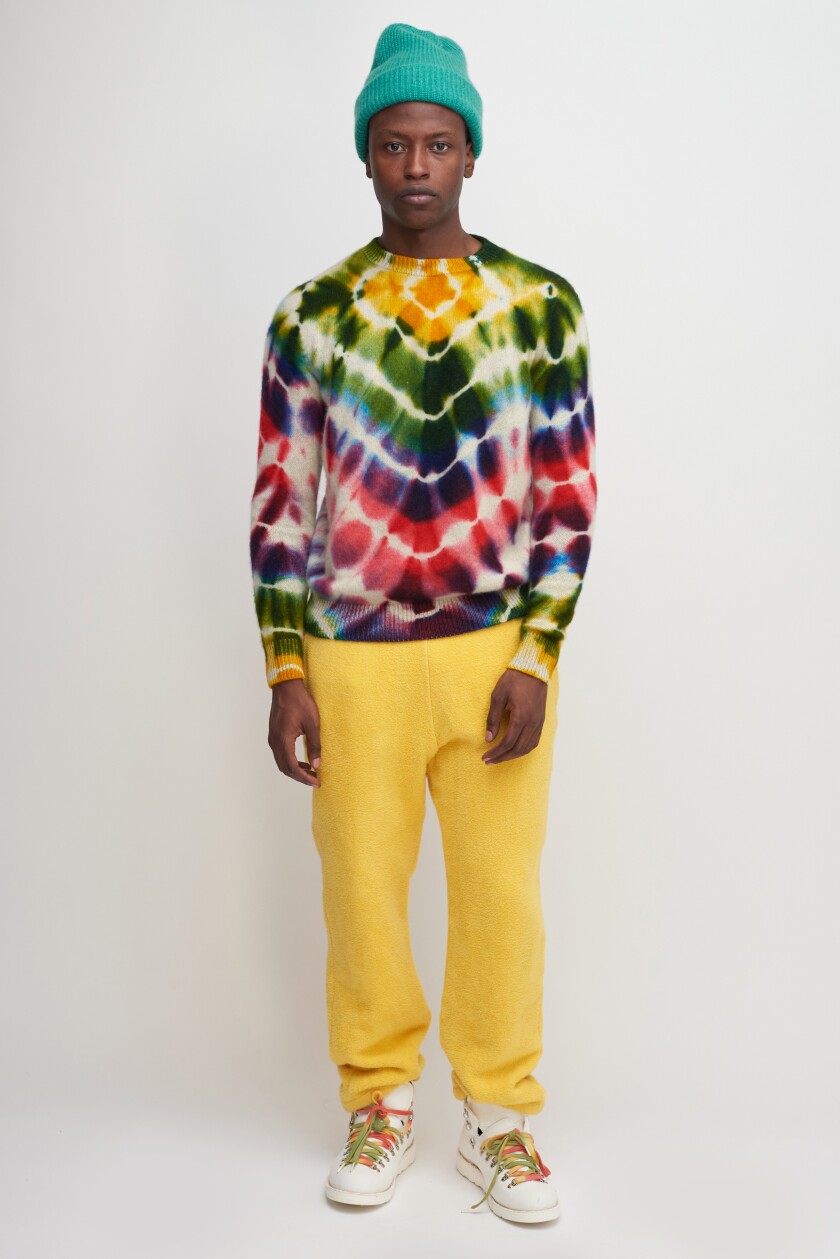 Tie-dye apparel from the Elder Statesman.

“This past year has been so unfamiliar and strange in so many ways I think there’s something very familiar, very nostalgic, not to mention uplifting, about tie-dye — all things we have been craving over the last few months.”

Dayna Isom Johnson, a trend expert at Etsy, said: “Tie-dye has been one of the most popular trends this past year, showing up everywhere from loungewear to face masks.”

Data from the craft-focused e-commerce site shows a 264% increase in searches for tie-dye and shibori-dyed items this year, compared with 2019. Tie-dye DIY kits, meanwhile, have seen a whopping 2,345% increase over the same period. “With such a tumultuous year behind us, the new wave of tie-dye designs has offered shoppers a way to make things a little brighter during a time when reality has often felt overwhelming,” Johnson said.

And while tie-dye touches on our need for crafts and also optimism, perhaps its most important quality is its ability to be whatever we need it to be in any given moment.

“Tie-dye has one foot planted in a super turbulent, expressionist era of our history, and the other in the 21st century, which is becoming increasingly about how to write your own rules and break all of the boundaries,” Fisher said. “As a hobby, it also continues to meet the definition of self-care and therapy, something that we can actually control in an otherwise chaotic time.” 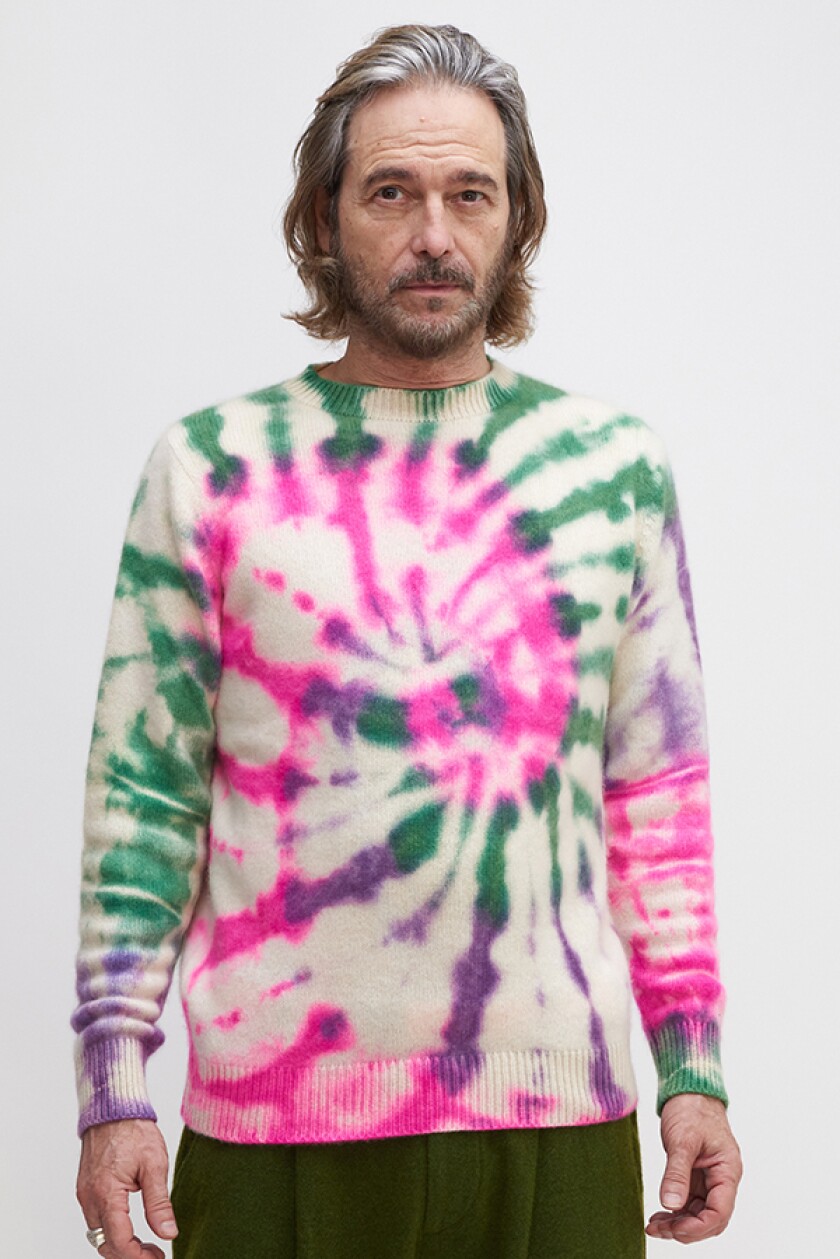 Tie-dye apparel from the Elder Statesman.

Mycoskie, of Aviator Nation, sees tie-dye as a representation of something else — recentering fashion away from marketing and commerce and more toward artistic self-expression. “I’m trying to communicate the art of fashion,” she said.

To that point, her pieces are still dyed individually by hand — as opposed to produced in mass quantities — which means that each one from Aviator Nation is unique. “Tie-dye is rad, because it gives us another way to really bring art to the garments and create something special for our customers,” she said. “I love giving my customers a one-of-a-kind garment.”

And in a year filled with unpleasant revelations at every turn, one can’t help but think that tie-dyeing represents a small, joyful surprise that you can control. As Mycoskie put it, “I love how you never know what you’re going to get until you unravel all the ties and rubber bands.” 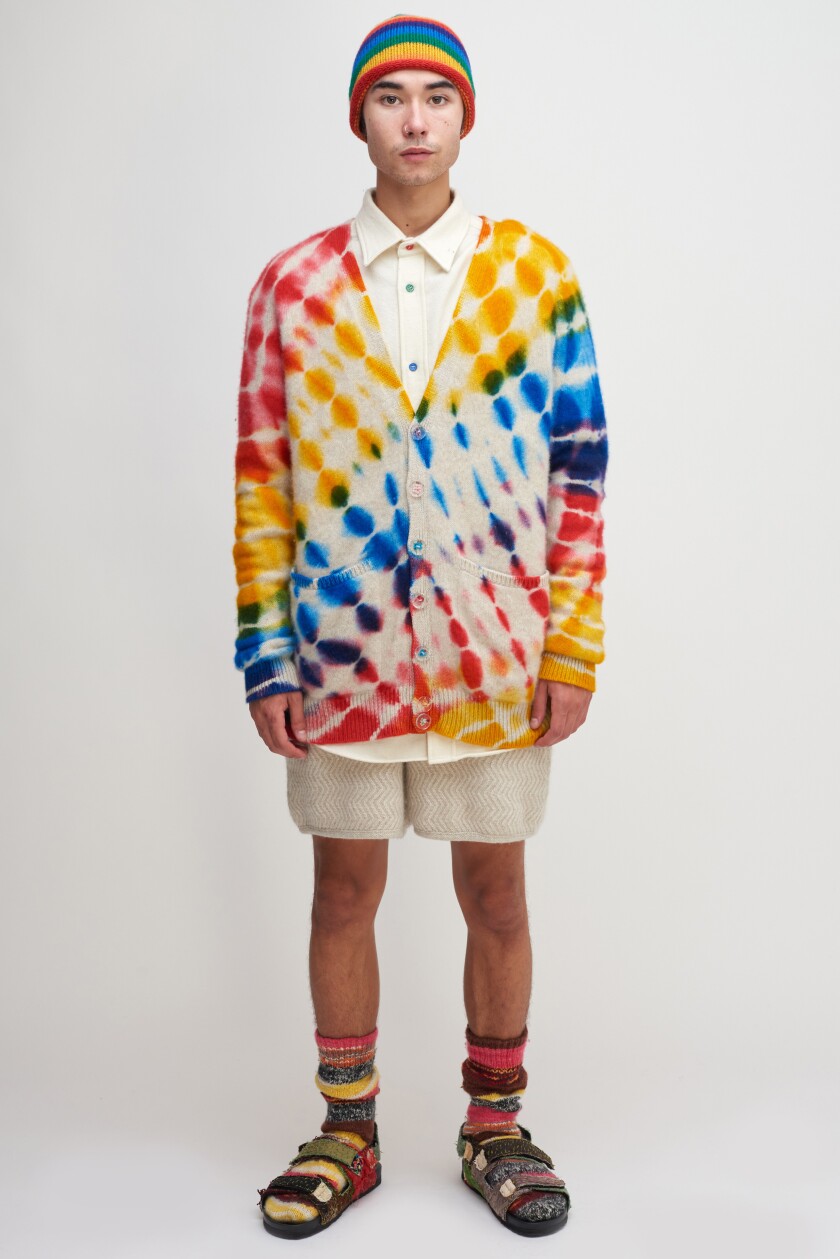 A tie-dye cardigan from the Elder Statesman.