Progressive Democrats aren’t on board with House Speaker Nancy Pelosi’s (D-Calif.) directive that Democrats will likely have to cut major agenda items from their upcoming Build Back Better social policy bill.

As a few conservative Democrats remain at odds with the party over how much to spend on President Joe Biden’s agenda, Pelosi said this week that Democrats will likely need to slim down their ambitions for the reconciliation bill.

But progressives prefer a different approach: If the bill is going to be smaller, then they prefer to pass shorter-term safety net expansions, instead of jettisoning of entire sections of the legislation.

Rep. Pramila Jayapal (D-Wash.), who chairs the Congressional Progressive Caucus is urging Democrats to shy away from cutting out programs from Build Back Better.

Rep. Ro Khanna (D-Calif.), a deputy whip in the Congressional Progressive Caucus, had a similar message. “What I’ve heard overwhelmingly from the Progressive Caucus is that they want to make sure that we aren’t cutting programs,” he told HuffPost.

One exception to the CPC’s preference for shorter time spans is the bill’s measures to address climate change. Reducing the duration of those measures could make it difficult for energy markets to properly adjust to the changes, Jayapal told HuffPost last week.

In a letter to House Democrats on Monday, Pelosi said “it is essential that difficult decisions must be made very soon” and that members have “overwhelmingly” said they would prefer “to do fewer things well so that we can still have a transformative impact on families.”

Pelosi defended her position during a Tuesday press conference, saying that Democrats can’t get a $3.5 trillion bill through the Senate as they had originally planned.

“The fact is that if there is fewer dollars to spend, then choices have to be made,” Pelosi said.

The original Build Back Better outline included hundreds of billions for parent benefits, child care, universal prekindergarten, as well as money for housing and green infrastructure, plus expansions of both Medicare and Medicaid. Pelosi suggested the family policies would be a priority. Democrats have always said a continuation of the monthly child tax credit payments to parents, which are scheduled to stop after December, would be the cornerstone of the bill.

Asked if Democrats would drop programs from the bill, Pelosi was noncommittal: “We hope not,” she said.

Democrats still haven’t come to an agreement on what the reconciliation bill’s overall price tag should be. Sens. Joe Manchin (D-W.Va.) and Kyrsten Sinema (D-Ariz.) have made clear that they won’t support the proposed $3.5 trillion. Manchin has previously said he supports a $1.5 trillion investment, while Sinema refuses to give a top-line number she’d back.

The lack of specifics from Sinema and Manchin has aggravated the progressive wing of the party, especially as party leadership begins to contemplate what programs they might have to cut.

“We are not going to negotiate with ourselves,” Sen. Bernie Sanders (I-Vt.) said. “The time is now long overdue for Senator Manchin, and Senator Sinema, to tell us exactly what they want to cut.” 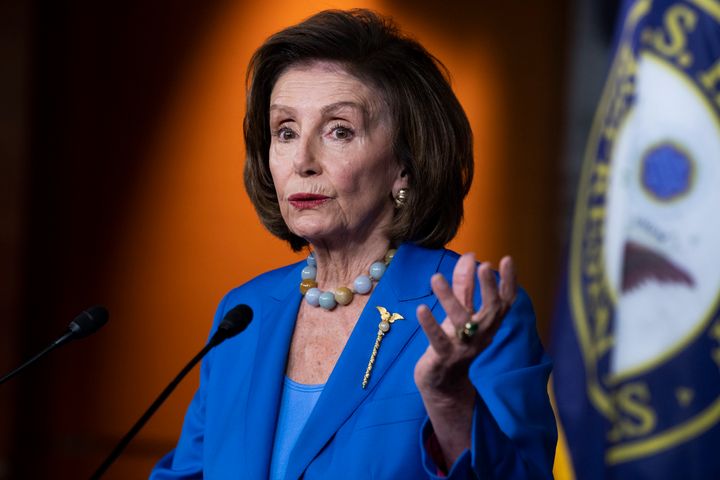 Speaker of the House Nancy Pelosi (D-Calif.) conducts her weekly news conference in the Capitol Visitor Center where she discussed the House vote on debt ceiling on Oct. 12.

Pelosi admitting that Democrats would likely have to pursue a much narrower reconciliation bill echoes the moderate to conservative faction of the party’s position. Blue Dog Caucus co-chair Rep. Stephanie Murphy (D-Fla.) has said it is “political reality” that the bill must be smaller.

The New Democrat Coalition, a bloc of moderate House Democrats, praised Pelosi’s Monday night letter, saying the Speaker “aligns” with their views on the reconciliation bill. The New Democrats have advocated for an extremely slimmed down bill that would extend some version of the expanded child tax credit, fund the Affordable Care Act premium subsidies, and pass provisions to address climate change.

Including more programs as part of a slimmed-down bill would require Democrats to shorten the programs’ duration, so that their ostensible cost takes up less space in a 10-year budget window. Lawmakers have routinely made policies temporary with the full intention of making them permanent later, but the New Democrats are rejecting that strategy.

In addition to chairing the New Democrat Coalition, DelBene has been one of the House’s most vocal proponents of the child tax credit expansion. And in last month’s battle over whether the House should approve a bipartisan infrastructure bill before the Build Back Better bill, the New Democrats did not endorse the call from a tiny faction of conservative Democrats to separate the bills and pass infrastructure first.

But now there’s an apparent rift between two caucuses, each of which has roughly 100 members, with how to proceed should the bill be smaller. That said, no one is exactly sure just how small they’ll have to go either.