Why movie musicals like ‘The Prom’ shut stage actors out

In the Netflix movie “The Prom,” Keegan-Michael Key plays a high school principal who saves all his money for an annual trip to New York to see as many shows as he can. Though binge-watching Broadway — plus the cost of hotels, flights, meals and other expenses — adds up to a pretty penny, especially for a small-town school administrator, it’s a price worth paying. That’s the power of performance, the magic of live theater.

“We look to you in good times and bad / the worlds you create make the real one seem less sad,” he sings to a theater legend, played by Meryl Streep. “We look to you, as strange as it seems / when reality goes to scary, new extremes.”

Key’s rendition made me emotional because “The Prom” hits Netflix as our COVID-ridden reality becomes more terrifying and heartbreaking with each passing day. It’s been nine months since I was last in his character’s shoes: seated amid strangers for a shared narrative experience, staring at a stage with wonder and awe, standing in a packed house to applaud a curtain call. This brief, beautiful number unabashedly underlines the queer-inclusive story as one that’s also “a love letter to Broadway,” a phrase used by numerous critics in their reviews.

Yet “The Prom‘s” journey to the screen underscores the inequities underneath the surface of Hollywood’s shiny stage musical adaptations, which often leave the original cast members hanging — and render invisible the work they’ve done to make the production what it is in the process.

“The Prom” movie is directed by Ryan Murphy, who, in January 2019, sat down in the Longacre Theatre with little prior knowledge about the Tony-nominated production, let alone plans to adapt it as part of his unprecedented $300-million Netflix deal.

“I mean, as a 50-something-year-old guy, am I going to relate to this?” he recalls to The Times of the campy musical comedy, about actors who try to help a lesbian teen attend her school dance. “As it went on, I kept on thinking, ‘I like it, I like it.’ I was stunned at how much I dug it. When it ended, I walked out and I was like, ‘I’m gonna buy this.’”

Murphy, also a producer of theater and a longtime fan, immediately alerted Meryl Streep, James Corden, Nicole Kidman and Kerry Washington — his bucket-list actors, all of whom signed on within the same week — and got the project greenlighted by Netflix in the first week of February, while the live version was still running on Broadway.

Murphy acknowledges it was not a priority to consider, let alone cast, any of the stage show’s actors in the movie: “That was a decision that I made very early on. For me, as a director and a writer and a producer, I wanted to make my own thing and explore my own vision of it.” Caitlin Kinnunen, who played the teen lead Emma onstage, is the only performer who made the request to audition for the part she originated, a role that ultimately went to newcomer Jo Ellen Pellman through a nationwide casting call.

Recasting stage roles with big-name screen actors is nothing new. In fact, Broadway shows themselves indulge in stunt casting so often that even “The Prom” pokes fun at the practice, joking that Kelly Ripa, Cher, Connie Chung and Kris Jenner are all plausible guesses as to who is currently starring in “Chicago.”

Artistically speaking, a performance meant to reach thousands of live viewers at a time may not adequately translate to the intimacy of the camera. The dealmaking and development process can take so long that actors age out of the characters they once played, or move on to other projects in the meantime. And stars can help secure a project’s funding, entice international distributors, or bump up a film’s box-office draw. (But these rationales aren’t exactly applicable when a movie is made for Netflix, a global streaming platform that released the Murphy-produced remake of “The Boys In the Band” with its entire Broadway cast intact.)

After all, the original cast of “The Prom” is integral to the creation of its characters — some of whom fine-tuned them through eight years of readings, labs and out-of-town stagings before the show opened on Broadway in 2018, and then in eight live performances a week during the show’s run. With such depth of experience, one can’t help but know a character physiologically and psychologically, inside and out.

In recent years, musicals have become nebulous experiments, developed out loud and in collaboration. It is not uncommon for book writers, composers and lyricists to find themselves writing specifically to the vocal range and sensibilities of a participating actor — which is what happened with “The Prom,” as the roles played onscreen by Streep, James Corden, Nicole Kidman and Andrew Rannells were created specifically for Beth Leavel, Brooks Ashmanskas, Angie Schworer and Christopher Sieber, respectively. It is also not unheard of for that actor to make suggestions back to the creative team.

Those choices bleed into the film version of “The Prom,” consciously or not. For example, when Streep pulls out some endearing dance moves during “The Lady’s Improving,” she’s performing motions brainstormed by Leavel, who originated the role. When Kidman demonstrates the concept of “Zazz,” she’s echoing a routine partially crafted by stage performer Schworer. 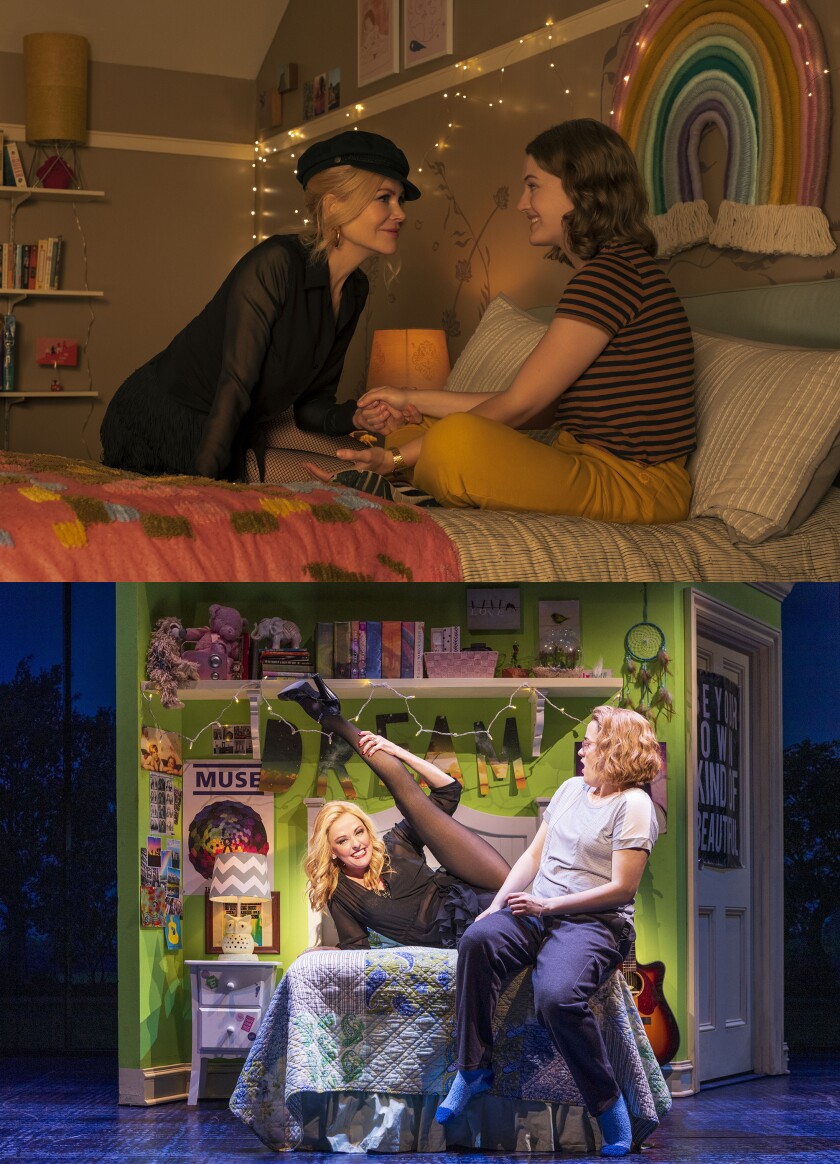 These are not negligible contributions. Actors’ input on line inflections and gestures are details informed by inhabiting the role and later become definitive to that character, arguably influencing how the entire piece is received by audiences and reviewed by critics. (This probably explains why the vain and flamboyant Barry Glickman was played to Tony-nominated acclaim by Ashmanskas, an out gay theater mainstay, and yet becomes “aggressively charmless” when played by Corden onscreen.)

Only recently has the theater world at large recognized that actors who participate in the development of a show contribute not just labor, but also ideas, that may bring about its success. The topic gained wider attention in 2016, when the producers and the original Broadway cast of “Hamilton” came to a profit-sharing agreement that echoed throughout the industry.

“In the theater, if you’re not part of the profit-sharing, and once your knees give out or your back gives out and you’re not part of the show anymore — even if you are a part of helping to create it, whatever small part you played in helping to make the thing — there’s no way you’re financially tied to this show,” Leslie Odom Jr. told The Times of the topic earlier this year. “Everybody should be at that table in the same way that everybody was at that table to create it. Everybody needs to be a part of the feeding when the food’s being doled out.”

The “Hamilton” agreement covers profits generated from touring productions, as well as any potential screen adaptations. “To the extent that the producer receives income from ancillary uses — meaning ancillary relative to theater, such as movie rights or adaptations — the cast members of ‘Hamilton’ will share in any profits generated from that income,” Ronald H. Shechtman, a leading labor lawyer in the theater industry who represented the “Hamilton” cast in the agreement, tells The Times. “It was important for the actors to feel that they were rewarded not only for the theatrical productions, but also from any other use and exploitation of the theatrical work to which they contributed.”

In 2019, Actors’ Equity Assn., a union representing performers and stage managers, and the Broadway League, an organization for theater producers, reached a landmark agreement for profit-sharing to become standard practice, after three years of negotiations that culminated in a five-week strike by the union. The show development agreement states that 1% of a Broadway show’s profits will be split among actors and stage managers who participated in its development. It spans 10 years and includes income generated from touring productions.

“Assuming the appropriate Equity contract was used, the original actors and stage managers could benefit and receive compensation if the entity created for the Broadway show receives royalties or fees from a producer who wants to use the work in another medium,” says Equity spokesperson Brandon Lorenz.

As it stands, though, the agreement is operable if and only if the show turns a profit. And, despite the resources Hollywood usually brings to bear on such high-profile projects, a subsequent adaptation is not included in that key calculation.

This is the case with “The Prom,” the $13.5-million Broadway musical that closed in August 2019 and postponed its national tour due to the pandemic. The landmark profit-sharing agreement does not apply to “The Prom” because it opened before the deal was reached, but even if it did, it wouldn’t matter because the stage show did not recoup its investment.

Murphy’s movie does employ key creatives from the original production: book writer Bob Martin, who wrote and reworked a number of scenes; composer Matthew Sklar and lyricist Chad Beguelin, who tweaked some songs and added a few more (including one featuring a rapping Meryl Streep); and choreographer Casey Nicholaw, who also directed the show. But it is not only these people who are responsible for creating “The Prom” and the components that made it attractive enough to adapt in the first place.

“I think the Broadway cast is phenomenal and wonderful, and we acknowledge and appreciate their hard work,” says Murphy. “We are indebted to them, of course, as we are to any show that becomes a movie-musical.”

No one from the original “Prom” cast was monetarily compensated for the film, or is mentioned in its credits sequence, either by name or as a collective. A special thanks for the Broadway show’s co-producers, each of whom are listed by name, is included. (Streep did thank Leavel for her contribution in a Q&A with the movie’s cast.)

“The Prom” isn’t the sole example of this problem, but it is an emblem of it — and a notable one given the production’s central theme: the love of theater. And while no one could have predicted it, the timing of its release especially stings, as stages remain dark and theater workers (actors included) continue to go without pay due to the COVID-19 pandemic.

With a swell of stage-to-screen musical adaptations on the way — including “Wicked,” “Dear Evan Hansen” and “Once on This Island” among others — the often symbiotic but sometimes strained relationship between Hollywood and Broadway is sure to continue beyond “The Prom.”

Though the post-pandemic theater world is uncertain, Hollywood’s love of theater, like the theater itself, isn’t going away anytime soon. And the people who make the work worth seeing, as “The Prom” itself suggests, deserve their fair share of its rewards.

How Innovation Changes During A Recession