L.A. Affairs: This romance was a train ride to nowhere

Column: I just spent 45 minutes on hold, and here’s what I thought of the music they blared at me

Hungarian researchers at Eötvös Loránd University are gathering evidence on this topic with a “Genius Dog Challenge.”

The nonprofit research project has been studying canine memory as a means to improve dog and human communication. Through a series of experiments, researchers tested their four-legged study participants on whether they recognized toys by name.

DEAF SHEEPDOG LEARNS SIGN LANGUAGE TO ROUND UP SHEEP

Dror explained that many dog owners often believe their furry friends understand their commands, which is in part true.

“However, when understanding their owners’ intent, dogs mostly rely on visual cues and pay less attention to the exact words their owner is using,” she said.

During toy name recognition tests, the dog toys were hidden from the owners’ view to ensure the participating dogs weren’t helped with visual cues.

Some dogs might be smarter than others. Hungarian researchers at Eötvös Loránd University are gathering evidence on this topic with a “Genius Dog Challenge.”
(iStock)

Six gifted dogs were identified in the challenge’s first round, including Max from Hungary, Gaia from Brazil, Nalani from the Netherlands, Squall from Florida, Whisky from Norway and Rico from Spain.

Each dog met the challenge’s toy identification threshold, which required each pooch to identify more than 28 toys by name. Some of the dogs recognized more than 100, according to a press release obtained by Fox News.

Other notable skills these dogs displayed included learning up to 12 new toy names per week and retained long-term memory.

“Our studies reveal that not only are some dogs gifted in their ability to learn object names while others are not, but also that these gifted dogs can learn new names very rapidly, some gifted dogs are even able to learn a new name toy after hearing it only four times,” Dror wrote in an email. “We do not know yet if these gifted dogs possess additional cognitive skills that are not common among other dogs.”

Dror went on to add that the Genius Dog Challenge’s research suggests that dogs have the ability to learn object names in a way that’s similar to humans.

“We hope that with the help of gifted dogs we can better understand the factors that contribute to the manifestation of talent,” she said. 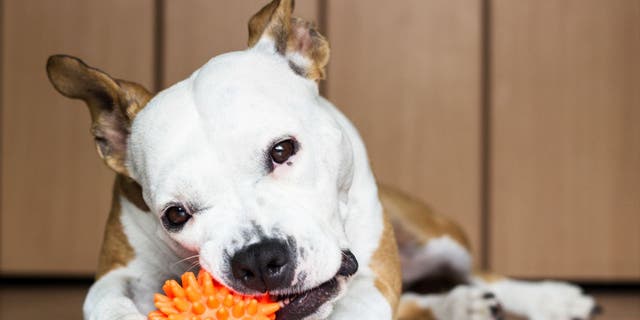 Dogs selected to participate in the Genius Dog Challenge were able to identify more than 28 toys by name.
(iStock)

If you’re looking to raise a “genius” pup that can fetch their own toy when told to do so, Dror offered a key piece of advice.

“As mentioned dogs are especially good at reading subtle visual cues given by their owners. So when communicating with our dogs we have to pay attention not only to what we are saying but also to our posture and movement,” Dror advised. “If we want to train our dogs to pay attention only to our words, we should try to limit those additional signals as much as possible.”