The ‘bubble’ saved the NBA season from Covid-19. But another crisis was waiting inside

“Sports was the canary in the coal mine,” Pete Giorgio, a principal at Deloitte who leads the firm’s US Sports Practice, told CNN Business. “[Coronavirus] wasn’t ‘real’ in the US until then, in a way — it was a thing that was happening overseas. And then that quickly changed.”

Nine months later, it’s clear NBA Commissioner Adam Silver’s decision to suspend play was prescient. But at the time, he was the first to upend a league’s delicately balanced ecosystem of stakeholders with vested interests, from arena sponsors to broadcast networks to the players themselves.

Two National Basketball Players Association leaders, President Chris Paul and Executive Director Michele Roberts, along with Silver, then had to find a way to keep players safe — pulling together a team of experts across various fields to create some kind of “bubble” isolation zone that would prove wildly successful. But just as those plans were taking shape, the May 25 killing of George Floyd by a Minneapolis police officer sparked massive social justice protests across the country and throughout the league.

The trio of NBA leaders now found themselves facing dual crises: How to safely return to play during a global pandemic while confronting a national reckoning on race?

“[In March] we didn’t know half of what we know now about this virus, yet you have to make decisions about how you’re going to move forward,” Giorgio said. “It takes a lot of courage — and a lot of risk-taking.” 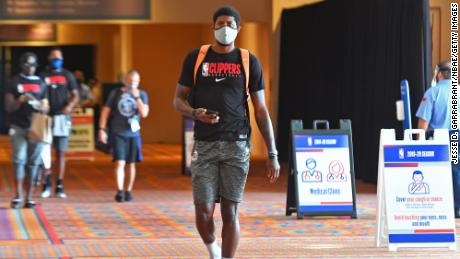 Silver spent much of March 11 conferring with medical experts, Roberts, team owners and others on how to react to the rapidly worsening pandemic, according to USA Today. Then came the news that Utah Jazz center Rudy Gobert had tested positive. Within hours the league announced the decision to delay.

“Adam had to gain consensus from a group of so many stakeholders — it must have been like herding cats,” said Andrew Brandt, host of the podcast “Business of Sports” and executive director at Villanova University’s Moorad Center for Sports Law. “You have the league and players, the team ownership interested in ticket and sponsorship revenue, [teams from] smaller markets who have different financial considerations, the networks, the events.”

Yet just as soon as the league paused the season, an even more challenging decision presented itself: how to start it up again.

Roberts and Paul spent months working with Silver and other league officials — along with legal, medical and business experts — to discuss the daunting details, from players’ personal concerns to Covid protocols to financial considerations. Their work culminated in a 100-plus-page document outlining a six-phase plan to transition into and out of the bubble, where the full season would be played.

Twenty-two of the league’s 30 teams — those within six games of a postseason berth on the day play was suspended — went into that bubble, a closed campus at Walt Disney World Resort near Orlando. Players would live, play and practice there, in closely monitored isolation, from July to October. The plan detailed everything from sanitizing basketballs and covering referees’ whistles to catch spittle, to setting daily testing and isolation guidelines.

“I had very quickly grown to understand the importance of isolation, quarantine…social distancing and using masks,” Roberts, who was set to retire from the NBPA but stayed on to help confront Covid, told Sports Illustrated. “It sounded so simple and it was working in other environments…the question was how do we take that quarantine and be able to do it in a group context.”

Creating the setup at Disney reportedly cost the league an estimated $170 million. And it wasn’t perfect, with some players frustrated at being isolated from family and friends, and others forced to quarantine after inadvertently or intentionally leaving the bubble.But it worked. In a sharp contrast to the outbreaks that hobbled other leagues, the NBA season concluded October 11 with a remarkable number of Covid-19 cases: zero.

The ‘once-in-a-lifetime’ power of players in one place

Battling Covid-19 wasn’t the only issue permeating that first night of games back on July 30. There was another challenge prominently on display — one that had been building long before the coronavirus pandemic.

Almost every NBA player took a knee before the re-opening night games, wearing “Black Lives Matter” T-shirts. The courts themselves were painted with the BLM logo and some players replaced the names on their jerseys with messages like “Equality,” “Ally” and “Say Her Name.” The statements were a strong response to the deaths of George Floyd and Breonna Taylor at the hands of police.

“It all just came to a head and guys started really communicating and started realizing that you don’t have to just shut up and dribble,” Paul told CNN’s Don Lemon during the 2020 Citizen by CNN conference in September. 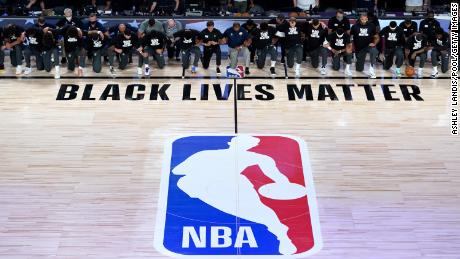 “Usually after the game, you just say, ‘Oh, how’s your family’ and you go your separate ways,” Paul added. “We really got a chance to connect in the bubble…to sit down at the table and figure out what we want our plan to be going forward. It was really good dialogue that happened, and I think that that was very important.”

That power of in-person connection was underscored again in August when Jacob Blake, an unarmed Black man, was shot in the back by police officers in Kenosha, Wisconsin. The Milwaukee Bucks opted not to play their Game 5 playoff against the Orlando Magic a few nights later. Two other NBA games were quickly called off, as were five Major League Soccer and three Major League Baseball games as athletes across the country acted in solidarity with the Bucks’ players.

“It was a once-in-a-lifetime chance for everyone to gather in a ballroom to hash out this important discussion about whether they should be playing,” said Brandt. “It’s the collective power to implement change, in action.”

Speaking broadly about social justice, Silver told Bob Costas at the Citizen by CNN conference that “I do want people to see this as the values of this league,” adding that such issues “are clearly endemic to this league where 80% of its players are Black. These are issues uniquely important, [ones] that this league has been speaking out about for such a long period.” 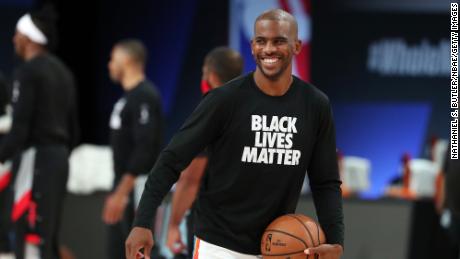 Roberts told The Washington Post that “this is something our fans are going to have to learn to live with…if a fan genuinely finds the idea of Black Lives Matter so offensive that they don’t want to watch basketball, I’m not losing sleep over it.”Roberts, Paul, Silver and the entire NBA ecosystem are preparing to begin a new season on December 22 — this time in the “real world” outside of the protection of the bubble, albeit with precautions. It’s already quite different: Last week the NBA said 48 players, roughly 9% of the league, had tested positive upon reporting to training camps as cases continue to surge across the country.

The 2021 plan introduces other logistical challenges, too, with factors like the Tokyo Summer Olympics potentially encroaching on players’ schedules. But for Silver, Paul, Roberts and the rest of the NBA, it’s just another complication they’ll have to reckon with after a season like no other.

“Again, it’s something we’re going to have to work through,” Silver told Costas about the Olympics. “These are highly unique and unusual circumstances…and we’re just going to have to sort of find a way to meld and mesh those competing considerations.”

Tags: BusinessRisk Takers: The NBA's 'bubble' saved the season from Covid-19. But another crisis was waiting inside - CNN
Share197Tweet123Share49