Blomberg has ranked the Philippines last in its list of the best and worst places to be during the pandemic.

The news organisation explains why:

The monthly snapshot – which measures where the virus is being handled the most effectively with the least social and economic upheaval – ranks 53 major economies on 12 datapoints related to virus containment, the economy and opening up.

The Philippines’ drop to No. 53 reflects the challenges it’s facing from the onslaught of the delta variant, which has hit Southeast Asia particularly hard amid difficulties containing the more contagious strain and slow vaccination rollouts. The region, which recently had the worst outbreak in the world, populates the September Ranking’s lowest rungs, with Indonesia, Thailand, Malaysia and Vietnam all in the bottom five.

In Australia, Victorian authorities say Thursday’s spike in Covid-19 cases – the highest one-day total for the state the pandemic so far – was “completely avoidable”, with parties for the Australian Football League grand final and other social gatherings over the long weekend behind up to one-third of the 1,438 new local infections.

Premier Daniel Andrews said he was sure the latest case numbers would be “of great concern to all Victorians”.

“The Thursday after a long weekend, and particularly given what we know from interviews over recent days, many of these cases were completely avoidable,” he said:

Charity food banks in Britain are “preparing for the worst” as the government starts winding up emergency aid measures put in place to cushion the coronavirus pandemic’s impact on millions of workers and low-income households, Reuters reports.

An extra weekly payment of £20 (US$27) to support the country’s poorest families will be cut next month, and more than a million workers face an uncertain future as Britain becomes the first big economy to halt its Covid jobs support scheme.

Food banks, which hand out staple goods from dried pasta to baby food, are especially concerned about the loss of the top-up to the Universal Credit (UC) benefit, which is claimed by almost 6 million people, according to official statistics. 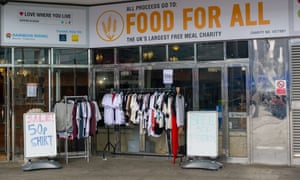 A Food For All shop in Slough, UK. Photograph: Maureen McLean/REX/Shutterstock

In the United States, pandemic unemployment benefits that supported millions of jobless, gig workers and business owners came to an end in early September, a month after a moratorium on residential evictions expired.

Australia and Canada have also announced plans to end income subsidies in the near future.

A British government spokesperson said the income benefit increase was always intended to be temporary and had been effective in softening the pandemic’s impact on family finances, adding that the focus now was on helping people back to work.

Nationwide, more than 800,000 people will be pushed into poverty by the benefit cut, according to British think-tank the Legatum Institute.

A fifth of the benefit’s claimants said they would “very likely” need to skip meals once the uplift is withdrawn, found a survey of more than 2,000 people carried out for the Trussell Trust.

A similar number said they would struggle to afford to heat their homes.

Britain’s charity food banks are “preparing for the worst”, Reuters reports, as the government starts winding up emergency aid measures put in place to cushion the coronavirus pandemic’s impact on millions of workers and low-income households.

Meanwhile in Australia, the Victorian state of Melbourne has reported its highest one-day case total of the pandemic so far, as its Delta outbreak overtakes infections in the neighbouring state of New South Wales.

More on these stories shortly. In the meantime, here are the other key recent developments: