Heidi Klum’s daughter Leni looked completely in her element recently, in a modeling debut for the ages.

Leni – born Helene — is the eldest daughter of Klum and singer Seal, adopted by the former couple in 2009.

But despite the lack of shared biological DNA with her adoptive mother, many consider the 16-year-old to be a much younger clone of the 47-year-old “Project Runway” star.

Klum joined Leni on the January/February cover of Vogue Germany. While Leni thanked Klum in an Instagram post, writing that she “couldn’t dream of a better start,” Klum shied away from the spotlight this time around so her daughter could shine.

“Leni has already seen a lot of the world and has been behind the scenes from an early age,” Klum told the fashion publication about the cover story. “I always find it nice when she accompanies me at work. And it’s a strange, but very good feeling that it’s the other way around today: I accompany my daughter to work, not the other way around.”

HEIDI KLUM SAYS DAUGHTER LENI, 16, HAS AN INTEREST IN MODELING AND HOSTING TV

In the lively cover, Klum couldn’t help but plant a kiss on the cheek of her daughter as Leni struck an empowering pose while donning a green top, bright pink oversized slacks and an oversized blue blazer affixed over her shirt.

Klum played off Leni’s stylish getup as she elected to sport a contrasting combination and paired blue slacks with the pink blazer.

Last week, in a bit of foreshadowing, Klum opened up about her daughter’s desire to get into modeling and hosting television.

“She kind of comes [on set] and looks and learns not just what I do but also what all the different people are doing on a TV set. I think it’s very interesting to her,” the “Germany’s Next Top Model” host told People magazine.

Added Klum: “When you’re that age you’re still trying to figure out who you are, what you want to be and kind of see for the first time what are all these different jobs to make a TV show happen. She does want to do what I do.”

The “America’s Got Talent” judge said she was game for Leni to dabble in modeling and hosting should she find the drive.

“Who knows, maybe in five years when I’m not hosting the show anymore maybe it’s going to be like ‘Germany’s Next Top Model’ by Leni Klum instead of Heidi Klum,’ she quipped to People, adding, “[Leni] is kind of playing with this idea.” 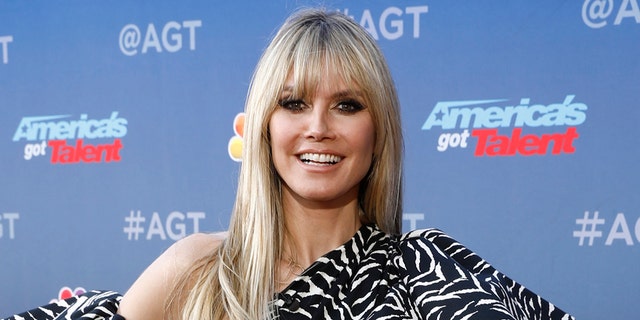 Heidi Klum said daughter Leni had to wait until she was 16 to make her foray into the modeling world. (Getty Images)

Klum had always kept the privacy of her daughters close to the vest, however, pointing out that since Leni is 16 and driving, the teen should have some freedom of her own.

“She’s old enough now,” Heidi told the outlet. “I always thought she was too young. We always also decided to keep the children out of the public eye. But she’s driving a car now, she’s 16, so I figured if you can do that, you can also model now if this is what you wish to do.”

Leni relayed to Vogue Germany that she actually could have made her modeling debut three years ago when the clothing brand Brandy Melville offered Leni her first gig at age 13.

“Back then I begged Mom, but no chance!” said Leni. “I now understand that it would have been too early.”