The year the music died

Back in late February, when COVID-19 was an ominous but still-uncertain threat, Megan James held out hope for a big year on tour.

Purity Ring, her L.A.-based electronic duo, had locked an April 3 release for its third LP, “Womb.” It had gone five years between albums and ached to hit the road with new material. The duo had booked a June hometown show at the 4,000-capacity Hollywood Palladium, with a global tour to follow.

But the band got nervous as South by Southwest, then Coachella, announced postponements. Should it push things back? Maybe this would all be over in a few weeks?

“Everyone feels like the ground was just taken from beneath them,” James said from her home in L.A. where she’s barely gone outside for close to a year. Purity Ring’s album — a dark record about the human body’s vulnerability — came out as scheduled. But it landed just as the pandemic ravaged live business and the music world locked its doors.

“Everyone has their own degrees of despair,” James said. “The bulk of our income will be deeply cut for a long time to come. I didn’t imagine last year I’d be thinking about leaving L.A. But where do we go?”

Everyone in the live music business has asked that question since the pandemic decimated the industry. The damage was relentless and comprehensive, and it’s nowhere near over: tours grounded, beloved venues shuttered, layoffs made permanent and lifelong dreams vaporized. An industry at the crest of a hugely profitable decade has plummeted off a cliff, with Pollstar estimating $9 billion in losses for 2020 alone.

The human toll of the pandemic is immeasurable. But to get a more personal sense of it, the Times surveyed approximately two dozen artists, club owners, venue owners and other live music professionals to gauge the damage the pandemic has inflicted on them.

The results are both obvious and harrowing.

Megan James of Purity Ring performs at Vogue Theatre in Canada in 2016.

The costs of this year in music have been both systemic and intimate. Artists such as singer-songwriter John Prine, Fountains of Wayne’s Adam Schlesinger, Afropop titan Manu Dibango, jazz paterfamilias Ellis Marsalis and composer Harold Budd succumbed to COVID-19. Countless others have quietly struggled with addiction, mental health, isolation and financial ruin. Independent L.A. venues such as the Satellite have closed for good, and others — including the Troubadour, Bootleg Theater and Zebulon — say it’s a matter of time, depending on whether federal help ever arrives.

Meanwhile, talent agencies and booking firms like Paradigm slashed staff, and even global companies such as Coachella promoter AEG cut salaries and laid off employees. “We’ve simply never experienced times like these, in which our operations have come to a complete stop due to a force beyond our control,” AEG’s chief executive Dan Beckerman said in June. Live Nation, America’s largest concert promoter, saw its quarterly revenues annihilated by 98% over the summer and 95% in the fall.

The Save Our Stages Act, championed in the Senate by Minnesota’s Amy Klobuchar and Texas’ John Cornyn, promised $10 billion in aid to independent venues and once looked hopeful in Congress, but stalled out alongside a bigger federal package of COVID-19 aid. 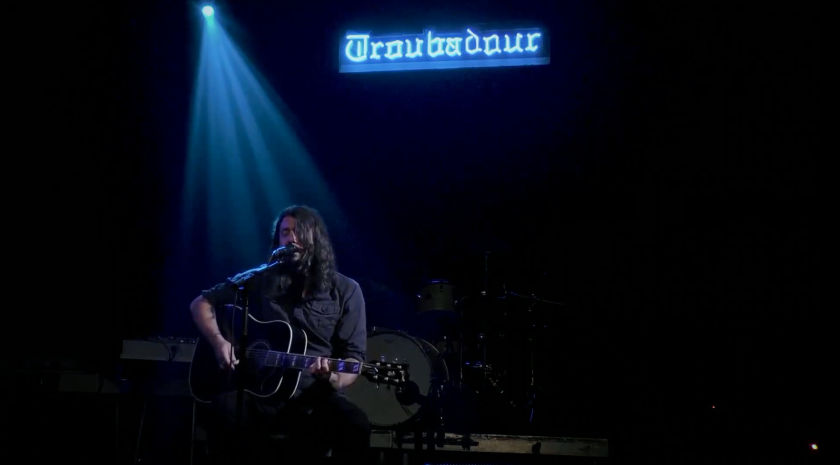 Dave Grohl of Foo Fighters performs for the Save Our Stages festival at the Troubadour.

“Our system should be better equipped to come to the aid of those who need it. We’re in the deep end, drowning,” Audrey Fix Schaefer, spokesperson for the advocacy group National Independent Venue Assn., told the Times in October. NIVA estimates that 90% of independent venues will close without government aid. Former WME music chief Marc Geiger has already founded a new firm, SaveLive, using $75 million in seed money to buy controlling stakes in now-struggling indie venues.

Touring was supposed to be the deepest, most consistent well of income for artists. Andy Gensler, Pollstar’s executive editor, told the Times that after the 2008 economy crashed and recovered, festival culture and concertgoing “exploded.” “The last decade has been a golden age,” he said. Big promoters like Live Nation were Wall Street darlings even as the Justice Department investigated anti-competitive practices.

But while several vaccines look promising, and artists are tentatively holding tour dates for the latter half of 2021, live music in L.A. is barely hanging on.

“I’ve lived in L.A. my entire life and I don’t like the idea of leaving, but it’s hard not to consider it when you see other people jumping ship,” said the Grammy-nominated L.A. producer Tokimonsta, who hosts a popular interview show, Lost Resort, on Twitch to air artists’ fears and hopes for live music.

Among the artists and professionals surveyed by The Times, some of the pandemic’s impacts were universal, and others particular. Only one respondent personally contracted COVID-19, while everyone said they knew someone afflicted with the disease. Some were hit exceptionally hard.

“Adam Schlesinger was a client and friend,” said Jonathan Daniel, co-founder of the management firm Crush Music. “His experience and passing completely changed my perspective and experience with the pandemic.”

Almost everyone surveyed had, to one degree or another, seen at least some of their livelihood obliterated. Nearly three-quarters of respondents said they’d lost more than half their income over the year. 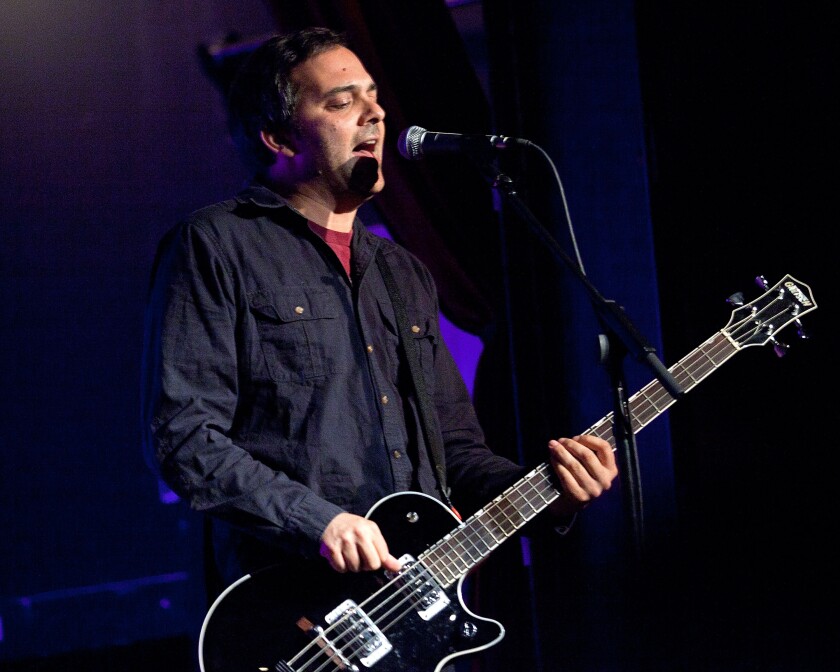 Fountains of Wayne’s Adam Schlesinger, who died from COVID-19 complications in April.

“We make 90% of our money from touring,” said Kelcey Ayer of indie rockers Local Natives. “But we’re very fortunate to at least be big enough to weather the storm. There are so many other artists who may not survive.”

“I lost my day job and all my gigs,” said Daria Lourd, the experimental club music producer and DJ who performs as Bored Lord. She “had to rely solely on Bandcamp day and odd commissions” for income for most of the year.

Code Orange’s Jami Morgan was “hoping to finally make a (very) modest amount of money” on tour opening for Slipknot and at festivals like Coachella. But “those dreams were quickly squandered.”

Artists and the industry have had to get creative to cover those gaping holes in their finances. Many promoters turned to ad hoc online forums and livestreaming setups to throw digital festivals. Some innovations, like the wildly popular Verzuz series of Instagram battles between legacy acts in hip-hop and R&B, may well outlast the pandemic as its own format for live performance. Twitch, best known as a site for streaming e-sports, became a halfway house for the concert business, where artists found creative ways to re-create or even move beyond physical gigs.

Still, a quarter of respondents said they’d had to borrow money from friends or family or changed careers during the pandemic. More than half said they worry about being able to stay in the music industry long term.

“Full time, I don’t think it’s possible under the circumstances,” said Susie Garcia of Mariachi Las Colibrí, who along with her husband, Pepe Martinez Jr., are among the city’s preeminent mariachi performers. “We are both over 40. There is a huge shift in how we are thinking long term now.”

The psychological impacts are acute. Nearly six in 10 respondents said they’d suffered significantly increased depression or anxiety since the start of the pandemic.

Aundy Caldwell Crenshaw, the COO of the L.A. dance-music label and festival promoter Dirtybird, said she’d been through waves of “anxiety of how much longer we can last without help from anyone.”

Some managed to find inspiration in midst of loss. Taylor Swift and BTS released albums recorded during the shutdown, helping shape an accidental but meaningful type of “pandemic pop” that rose from and reflected dire circumstances. Phoebe Bridgers and Fiona Apple released acclaimed albums that, while recorded pre-pandemic, seemed to speak to the homebound, grief-rattled experience of the world right now.

Others simply met the moment of need, fundraising for charity and keeping spirits up while artists and fans alike tailspinned.

“We unintentionally discovered, in the post-COVID world, this vast area of creativity that’s been pretty unexplored,” said Chad Kenney, of the L.A. concert promoters Brownies & Lemonade, which coproduced the streaming festival series Digital Mirage, which drew millions of viewers and raised hundreds of thousands of dollars for NIVA and music charities like Sweet Relief since the pandemic began. “It was this combination of everyone rallying behind the idea of doing something when nobody had anything to do,” added his partner Kushan Fernando.

Nonetheless, a majority in The Times survey said they aren’t holding out much hope for concerts to return until fall 2021 at the earliest (and a plurality suspect it’ll be more like 2022). Almost two-thirds said a favorite venue had permanently closed during the pandemic. Places like the Satellite, NYC’s China Chalet, Washington D.C.’s U Street Music Hall, Austin’s Barracuda or San Francisco’s The Stud have, for years, fostered boundary-pushing music and nightlife communities and won’t easily be replaced. While L.A. flagships like the Troubadour are hanging on, who knows how long they can.

There were some workarounds: Drive-in concerts were a small lifeline for venues and fans alike for places that had the parking space. More than 68% of those surveyed said they wouldn’t go back to a show until a vaccine is widely adopted, but some said it depends on the circumstances.

“If it is outside [or] in a well-ventilated place,” Pulp’s singer Jarvis Cocker said, he’d consider attending some kind of set before the vaccine is broadly adopted.

“I could envision a situation — outdoors, socially distanced, very limited capacity — that I would attend prior to the vaccine being widely available,” added Dirty Projectors’ founder and Solange collaborator David Longstreth.

Most surveyed shared a mix of bewilderment and fury at the lack of government action to save arts and culture or to even do the bare minimum to coordinate public health and model good behavior. More than 90% blamed President Trump, at least in part, for the consequences of the pandemic. Ozomatli performs at the Concerts in Your Car series at the Ventura County Fairgrounds in July.

“The fact that safety protocols became a politicized issue is truly one of the most bewildering things that happened in 2020,” said Dennis Dennehy, chief communications officer for AEG. “And that’s saying something.”

For L.A.’s live music industry, life continues more or less as it has since March — rife with fear and confusion, with funds still dwindling. Those last nights of live music in L.A. seem like a half-remembered dream. From an after-hours set of sweat-sopping techno from Bored Lord, Eris Drew and Octo Octa in a downtown L.A. warehouse, or a birthday party on the patio at Mid City jazz club Pip’s on La Brea, a social sphere and culture built around live music now feels like a phantom limb. It’s no surprise that some tried to throw illicit shows anyway mid-pandemic, even if health experts said it was incredibly foolish.

But, with vaccines on their way, an unfamiliar feeling stirs in the air: hope.

“Part of me still kinda thinks we’ll never tour again,” Purity Ring’s James said. “But if and when it happens, it’ll be a huge relief and such a beautiful experience. Maybe it’ll be a representation of normalcy: ‘OK, now we’re back to how 2020 was supposed to be.’ ”