Beloved footwear executive George Malkemus died on Thursday in his New York City home. He was 67.

How Resilience Can Help You Thrive In Business

Virginia governor’s race: How to vote

Malkemus was best known of helping build the luxury shoe brand Manolo Blahnik’s brand presence in the United States, a staple in Carrie Bradshaw’s wardrobe in “Sex and the City.”

In 2013, Malkemus teamed up with Sarah Jessica Parker who portrayed the iconic New York fashionista as a co-founder of the actor’s eponymous shoe brand SJP.

Parker mourned the loss of her business partner on Instagram. She shared a picture of a metal cuff engraved with “WWGM3D?” meaning “What would George D. Malkemus III do?”

In the caption, she penned a heartbreaking message to pay tribute to the late footwear executive who seemed to be loved by many in the industry.

“I cannot summon the words for a fitting tribute. He deserves prose I don’t yet have. I have to gather my thoughts. Today I can only say I’m utterly heartbroken.”

“Til we meet again, I will spend the rest of my days asking ‘what would GM3 do?’” she concluded the caption. “I’m going to miss you so ‘F’in’’ much. Forever. X, Your SJ.”

On the official SJP by Sarah Jessica Parker Instagram page, another tribute was shared to honour his memory and contribution to the brand.

The post featured multiple photos of Parker and Malkemus together throughout the years.

The caption included a message to remember Malkemus, reading in part, “George touched our lives, and the lives of many, with so much more than just beautiful shoes.”

“He will be remembered for his kindness, unwavering generosity, spirit, sense of humour, passion, brilliant and inspired mind, and for the way he treated everyone he met like family,” the captioned continued.

“Even in our grief, we hold on tightly to the joyous memories he gave us throughout the years. GM3, we will forever honor you and do our best to make you proud.” 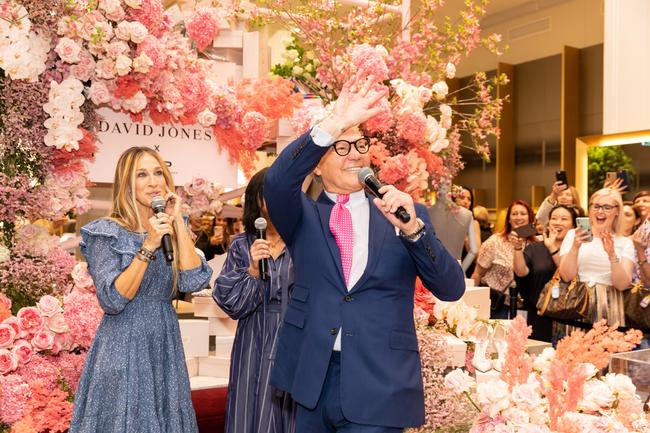 The news of Malkemus’ death was first announced on Friday, Sept. 17 in twin posts on Arethusa Farm’s Instagram and Facebook accounts.

The dairy farm, located in Litchfield, Connecticut, was owned by Malkemus and his partner, Tony Yurgaitis.

Both posts included a photo of Malkemus and Yurgaitis posing in front of a barn on the farm with one of their cows. The posts shared he died after a long battle with cancer.

“Our George was very private — preferring not to trouble anyone with his health concerns,” the post read in part.

“Though, throughout his illness, George and Tony worked together planning for and insuring the future of Arethusa.”

The post concluded on an optimistic note to honour the late footwear exec, reading, “Even in our grief, we will honour George and his legacy by following his wishes— to celebrate his life and continuing to serve our community the very best that Arethusa Farm has to offer.”

In 1982, Malkemus bought the North and South American rights to designer Manolo Blahnik’s name after the two met briefly, according to Footwear News.

Malkemus and Blahnik worked together for three decades until 2019, when the then president of Manolo Blahnik USA decided not to renew his license with the brand. He continued to work with Parker up until his death.

For Parker, choosing to collaborate with Malkemus on the next adventure in her career was a massive decision, but only he made sense for the role in her mind.

“I met with lots of interesting and kind and lovely potential partners, but at night when I was lying in my bed thinking about this opportunity and what it meant to me, those partnerships didn’t seem right for me,” Parker told Footwear News in 2013.

“I realised the one person I’d want to work with, in an ideal world, was George…But I was hesitant because I knew how obligated he was.”

Parker ended up reaching out to Malkemus and when the two met, she realised, “This is the relationship I wanted to be in. The way he wants to function and operate this business is everything that’s important to me.”