Police have arrested hundreds of people at an anti-lockdown rally in Melbourne that saw violent confrontations and officers hospitalised.

Police said 235 people were arrested, most for breaching health directions, but some were charged with assault, riotous behaviour and weapons and drug offences.

Ten police were injured while dealing with the rally, with injuries including a broken elbow and broken nose.

Three officers are still in hospital.

“Angry aggressive young males (were) there to fight the police, not to protest about freedoms,” he told the media late on Saturday.

Police said between 500 and 700 mostly maskless demonstrators gathered in Richmond about midday after the location of the protest was changed at the last minute to evade authorities.

At one stage, dozens of people ran at police in a clash that saw officers knocked to the ground and protesters doused with capsicum spray. 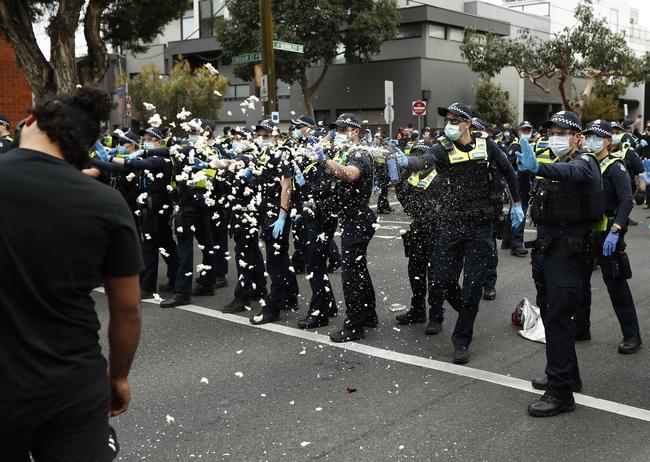 Some 2000 officers were deployed to try to stop the rally going ahead, while the CBD was closed off with a “ring of steel” and public transport into the city suspended.

Opposition police spokesman Brad Battin told reporters that while he did not encourage anyone to protest, he could understand the frustration of people subjected to extended lockdowns. 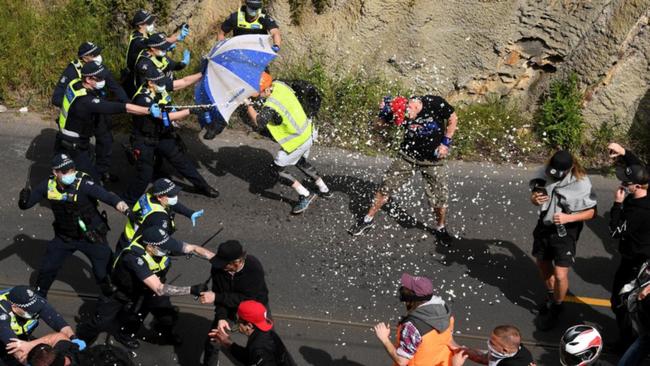 Anti-lockdown protesters have clashed with police in Melbourne. Credit: AAP 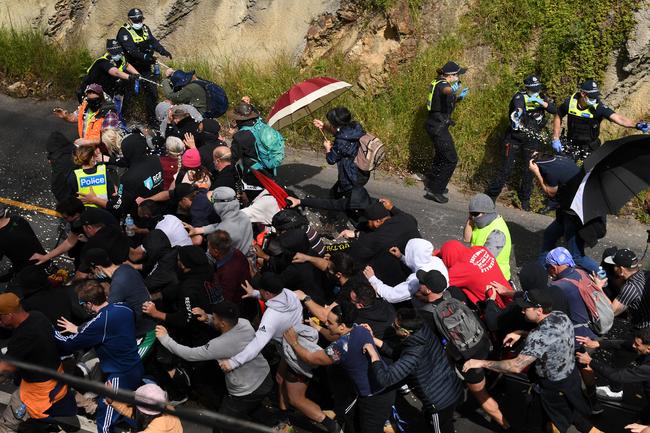 The protest comes as the state records 535 new COVID-19 infections and one death.

The latest case count released on Saturday is the highest daily number so far in the latest outbreak and came from 61,622 tests in the latest 24-hour period.

Also on Saturday, health authorities warned the state’s contact tracing team was under pressure and flagged delays in calls to track the movements of new cases.

Rising numbers have prompted the team to begin triaging cases to focus on those representing the highest risk, such as aged care workers.

“When you’ve got several thousand cases, that’s got to be dealt with in a different way than if there’s several hundred cases.” 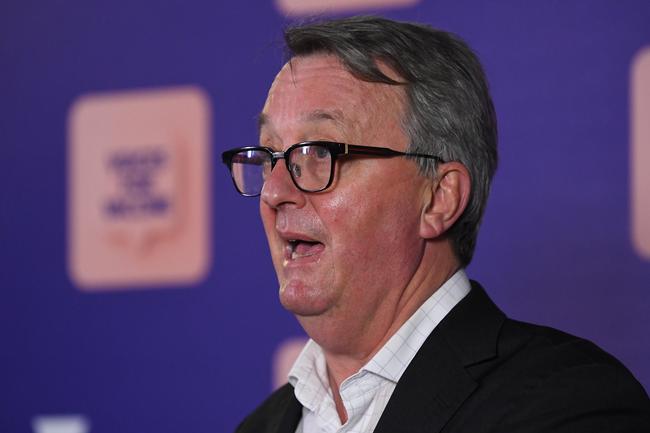 The Department of Health’s Kate Matson could not say how long the delays might be but promised anyone with a positive result would receive a text as soon as possible.

Among the changes, people will be able to meet one person from another household for a walk or picnic, outdoor exercise time is doubled and the travel limit expanded to 10km.

Fully vaccinated adults can see five people from two households, plus dependents for a picnic.

The state government is planning to outline a full road map out of lockdown on Sunday, tied to double dose vaccination rates and based on Burnet Institute modelling.