WHAT TO KNOW ABOUT SHARKS ON US COASTLINES

Interested parties are able to join charter boat operators on great white shark tours near the coastline for a fee.

In this May 22, 2019 file photo, a couple stands next to a shark warning sign while looking at the ocean at Lecount Hollow Beach in Wellfleet, Massachusetts.
(AP Photo/Charles Krupa)

Cape Cod hosts about 4 million visitors a year, who bring in more than $1 billion in tourism spending and support thousands of jobs.

As shark experts call for a rebranding of the marine predators – suggesting that attacks be relabeled “incidents” or “interactions” – Cape Cod has begun to tentatively embrace its toothier neighbors.

“Several years ago, there was a concern that it might have a negative impact on tourism,” Paul Niedzwiecki, CEO of the Cape Cod Chamber of Commerce, told The Associated Press earlier this month. “But we’ve been working to educate people about sharks and what we’ve actually seen is no negative impact.” 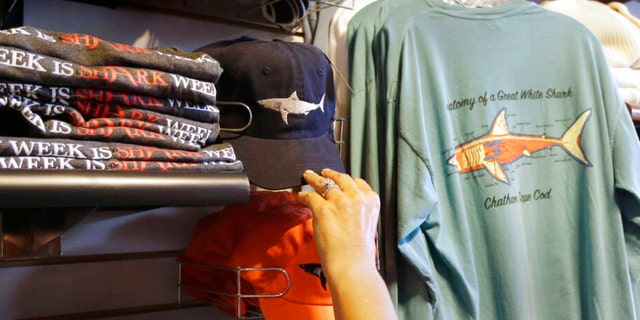 In this July 2, 2014 photo, a customer examines shark-themed clothing at a store in Chatham, Massachusetts.
(AP Photo/Steven Senne)

While there’s no definitive tally for how much shark-related tourism contributes to the Cape Cod economy, Niedzwiecki said that its growth is helping to extend the tourist season into the fall.

Peak shark sightings happen in August and September, and dozens of beaches have been closed in recent weeks as sharks travel up and down the East Coast.

Weather permitting, shark researchers expect to be out tagging and observing the creatures into November.

Although Massachusetts does not rank in the top 10 states for most unprovoked bites, activity is currently “much sharkier,” Atlantic White Shark Conservancy ecotourism naturalist Maddie Poirier told The Boston Herald. 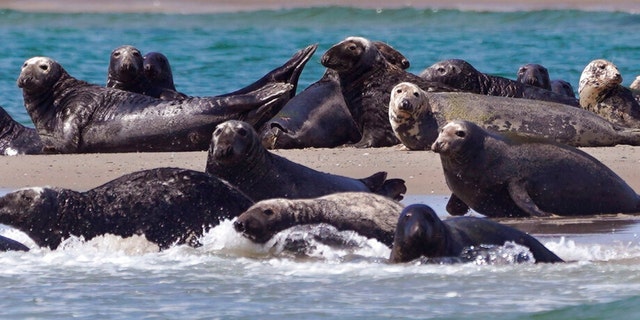 Seals, a food source for area great white sharks, bask in the sun and swim, near the sighting of a great white shark off the Massachusetts’ coast of Cape Cod, on Tuesday, Aug. 17, 2021.
(AP Photo/Charles Krupa)

Seal populations, deliciously meaty shark snacks, have also been increasing, according to the Cape Cod Times.

Officials have worked to invest in better training and equipment for lifeguards and first responders, surfers have armed themselves with shark repellents and other groups have pushed for additional safety measures including land-based warning systems and drone surveillance. 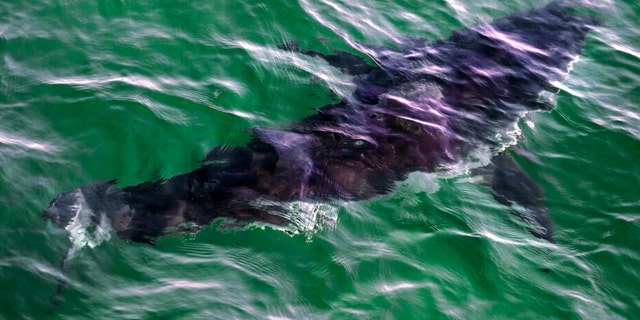 A great white shark swims past a boat on a shark watch with Dragonfly Sportfishing charters off the Massachusetts’ coast of Cape Cod on Tuesday, Aug. 17, 2021.
(AP Photo/Charles Krupa)

Much like the sandbar shark, white sharks are found on both coasts and great whites are the world’s largest known predatory fish, according to the World Wildlife Foundation.

Globally, there were around 129 alleged shark-human interactions in 2020, according to the International Shark Attack File.

There were 13 three shark-related fatalities, 10 of which were classified as unprovoked.