At a glance, it looks as if Nick Santiago and Matthew Hwang, founders of the creative agency and streetwear brand Pizzaslime, are hanging out with famous friends in a private jet.

Instead of piling the plush airplane seats with designer luggage, the cabin is filled with Pizzaslime pillows printed with absurd celebrity tweets from Kris Jenner (“I feel like there’s a giant meatloaf inside of me”) and Kanye West (“Naps are awesome”). The pillows areavailable for purchase on the Pizzaslime website, which is modeled after celebrity gossip site TMZ, for a mere $45 — that is, when they’re not sold out.

In reality, though, Santiago and Hwang are in a bare-bones Boyle Heights photo studio, which has been made to look like the interior of a private plane. And the celebrities? They’re cardboard cutouts. The space is rented for cheap by social media influencers and wannabes who want to appear to be living the jet-set lifestyle of the rich and semi-famous, and the whole setup is an example of the internet-infused irreverence that has made Santiago and Hwang and their brand popular.

Nick Santiago, left, and Matthew Hwang, founders of Pizzaslime, playfully occupy a set built to look like the inside of a private jet at FD Photo Studios, where they are photographing some of their new merchandise.

The two started Pizzaslime in 2013 and have since become buzzed-about hired guns in the world of online marketing. In recent years, they’ve made inroads into the fashion world, almost by accident, releasing cheeky printed sweatshirts and tees that have caused a stir online. Take, for example, a pair of Champion sweatpants they dropped two years ago featuring the line, “Stop looking at my …,” printed in capital letters across the crotch. The sweats have since gone viral on TikTok and been worn by singer Billie Eilish. (For sale on Pizzaslime’s website are an $80 rhinestone version of the popular sweats as well as other “Stop looking …” apparel.)

It’s the kind of potty humor people just a generation ago would find on shelves and racks at Spencer’s but today, thanks to Hwang and Santiago’s efforts, sells out quickly and is worn proudly by celebrities and social media influencers.

Don’t call Santiago and Hwang designers, though. They don’t think of themselves as such. “I don’t think we’ve ever defined what we’re doing or how we’re doing it,” said Santiago, 33, who has dopey eyes and an impish grin and goes by the nickname “Stove” (given to him by musician Tyler, the Creator for no apparent reason). “That’s what keeps it interesting.”

The Pizzaslime brand started off as a music blog. The name is something Santiago created while at the University of Arizona, when, he said, he would get drunk and buy made-up website domain names. Today Pizzaslime is a bit of everything. It’s a music label, streetwear line and internet marketing agency.

Santiago and Hwang grew up alongside the internet, Hwang in Palo Alto as Silicon Valley blossomed into the home of today’s social media behemoths, Santiago splitting his youth between Silver Lake and Brooklyn, watching both neighborhoods undergo extreme gentrification.

They met during college and afterward worked jobs in the music industry before realizing that hungry digital-savvy underlings — no matter how smart or creative — aren’t always looked upon kindly by corporate overlords. A small group of their pals used to get together to drink beer and complain about work, and it was after one of those sessions that Santiago pulled Hwang aside to convince him that they should strike out together. 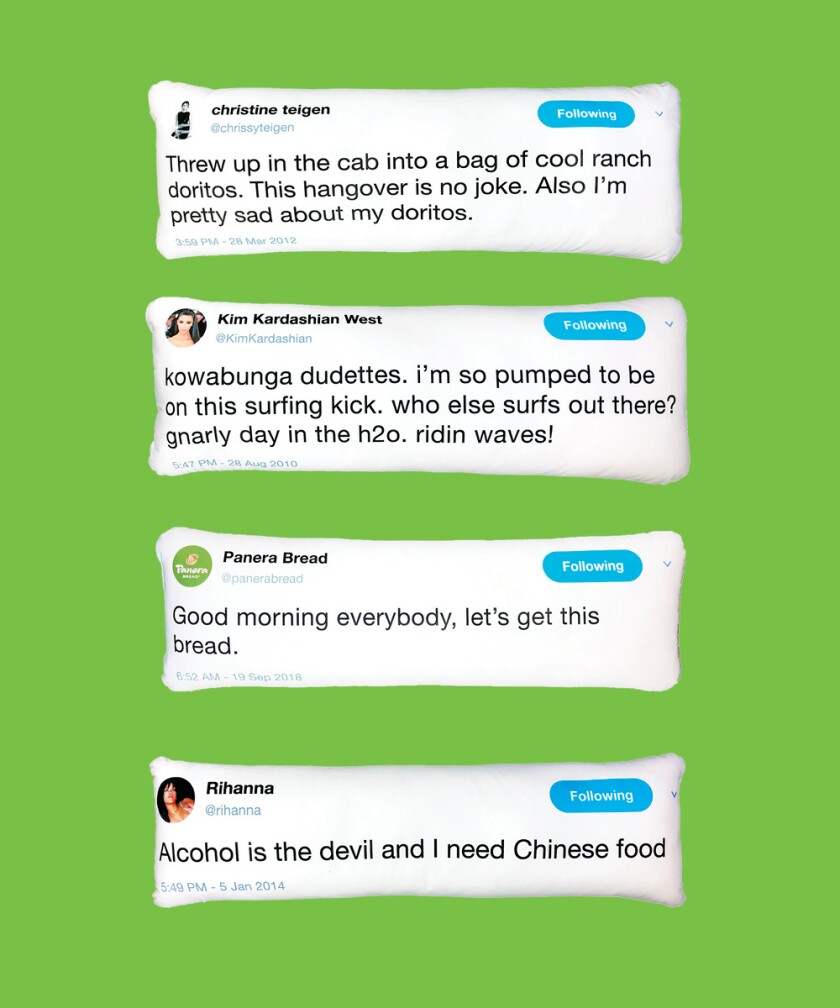 Santiago and Hwang have earned themselves a cadre of influential fans and plenty of social media clout — 1 million followers on TikTok alone — by harnessing the raunchy and random ephemera of the World Wide Web and spinning it into eye-catching, humorous apparel, which also happens to be quarantine-cozy.

“We heard a lot of people saying that they’re iconic,” Hwang said of the sweats. “They blew up as TikTok was becoming really big this year.”

In fashion today, it’s no longer the cut of a jacket or the length of a skirt that draws attention. What matters most is the ability to drive likes, shares and potential sales through social media platforms. That makes Pizzaslime the demented Balenciaga of the moment.

Pizzaslime’s days as a trash-talking music blog were short-lived after the founders showed an early propensity for creating things that excited people, especially as the worlds of fashion and social media began to overlap.

Take an early success: a sticker shaped like a slice of pizza wearing a wallet chain, which got tongues wagging at Coachella. The brand’s first major hit was a graphic T-shirt that combined the logos of European fashion houses — Gucci, Versace, Louis Vuitton and Chanel — in a way that was ironic and overtly fake-looking, like bad bootleg merch you’d find sold on Hollywood Boulevard. That, of course, added to the cool factor, making it seem like a commentary on consumer culture and authenticity.

Through their music industry connections, Santiago and Hwang got the tee to music producer and DJ Skrillex, who wore the shirt to a Versace party. The move seemed to add to the joke.

It’s that meta-humor and subversion of the traditional high-end/lowbrow hierarchies that have endeared Pizzaslime to its fans. Although the PG-13-rated “Stop looking …” sweatpants were a draw for the brand, Hwang cited TikTok influencers such as Chase Hudson (27.8 million followers) and Addison Rae (70.5 million followers), who have worn Pizzslime clothing in their individual posts, as helping to create the online fervor. 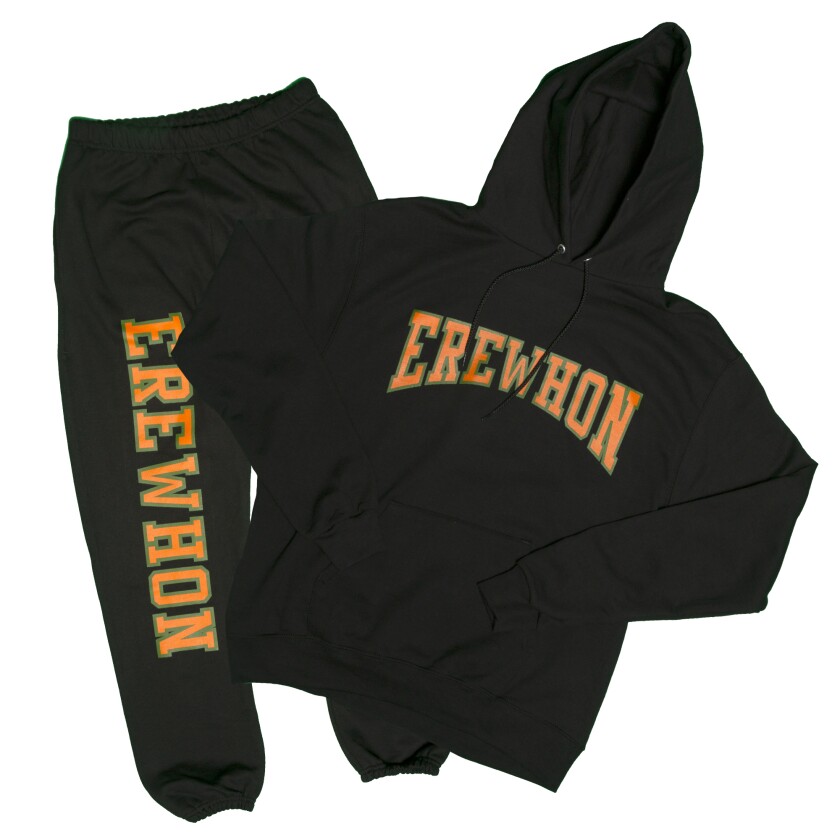 A sweatsuit created by Pizzaslime for upscale grocer Erewhon.

In addition to those naughty sweatpants, Pizzaslime has released a $300 Erewhon sweatsuit featuring the logo of the upscale grocery-store-to-the-stars (worn by Sophie Turner and Jonah Hill) and had a collaboration with Crocs, for which they turned the chunky clog into a cross-body bag. There was also a limited-edition T-shirt for trendy Italian joint Jon & Vinny’s in West Hollywood that features a picture of fusilli.

Santiago and Hwang’s calling card is that they are fluent in the strange and ever-evolving vernacular specific to the internet, and they’re willing to do anything. Early in the Pizzaslime days, for example, Paramount Pictures asked them to make a lyric video to accompany a song for the release of a “Teenage Mutant Ninja Turtles” movie. The duo agreed, although they didn’t know how to make one.

“We said, ‘Of course that’s something we do,’” Santiago said. “We figured it out.”

Companies look to them for help connecting to young, digitally native audiences. “When you’re not fluent in something, you’re thinking too much about what you’re saying and how you’re saying it,” Santiago said. “But for us, understanding the internet is natural. We grew up in it. It’s become a tool and a resource for us to explore the world and do cool things. It’s hard to talk about the internet because … it just exists. It’s there, and we’re good at it.”

“We come up with creative ideas that are different,” said Hwang, the more low-key and stoic of the two, “that are inspired from reference points throughout our lives — whether that’s the internet or music — and translate them for corporations in a way that makes sense for their goals. Hopefully we end up with a product that’s more left of center than what they normally do.” 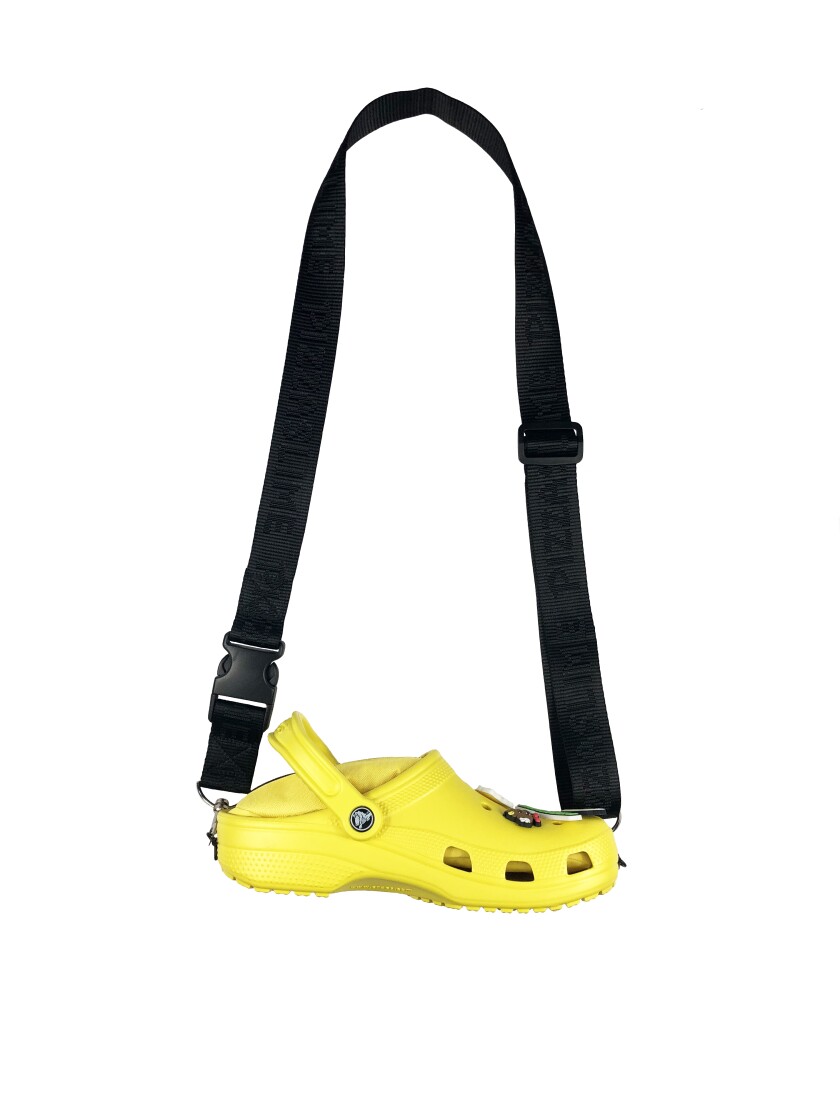 Molly Wilhelm, director of product line management at Crocs, says, “They understand culture and the millennial, Gen-Z consumer so well.”

After the Crocs-as-cross-body-bag was released last year, Crocs has continued to work with Pizzaslime on strategy and product, a relationship that appears to be working.

In October, GQ ran a story headlined “Crocs Are Cool Now.” “What we love about [Pizzaslime] is that they have a knack for the virality of things,” Wilhelm said. “They’re authentic fans, so they understand our brand and why consumers are having a heyday with it. The ideas they come up with? We’re like, ‘What? Where did you pull this from?’” 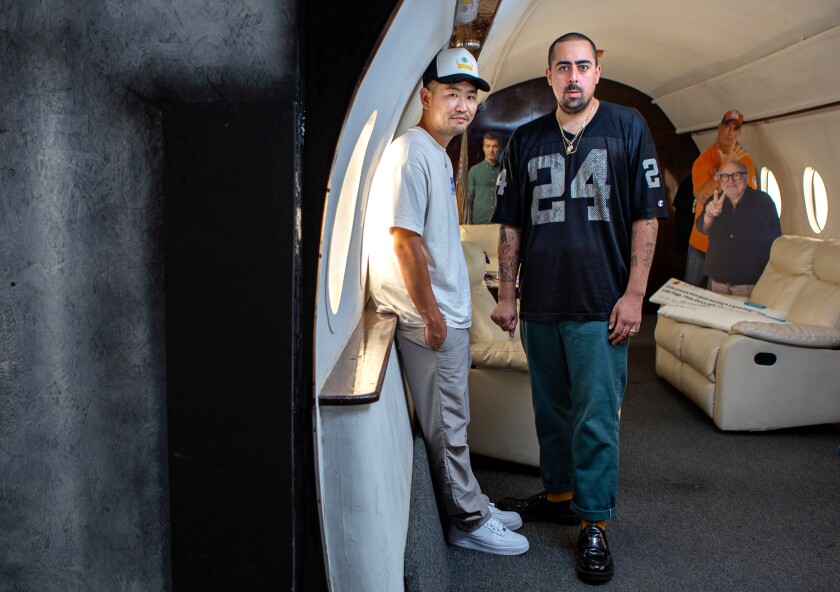 While the pandemic has led to business woes for many, Hwang and Santiago have been expanding the scope of what Pizzaslime could be. In March, they announced they were starting an imprint with Diplo’s music label, Mad Decent. “Pizzaslime is a movement — they are ruthless, cutting-edge and crazy on top of culture,” Diplo said in a press release. And an Amazon Prime animated series, “Fairfax,” has been given the go-ahead for two seasons.

However, it’s the latest product they’re working on that hints at bigger and more visible ambitions. It’s a hoodie with the brand’s logo across the chest. Does this mean no more memes? Turns out there was a hunger from fans, and who are Santiago and Hwang not to answer?

“We’re extremely behind-the-scenes,” Santiago said. “We don’t want to have our faces on it. We’re trying to do more branded stuff because people are asking for it. There’s actually a real home for it.”