“It is worrisome,” one official told CNN. “We have indications” of militia preparations, they added. The official declined to offer specific details due to the sensitive nature of the intelligence but said all the weapons “capability” needed by the groups is already in Iraq, noting the militias consistently maintain a stockpile of rockets and artillery.

While there are no specific indications that any decision to attack has been made, the official said the preparations had been undertaken in recent days.

The militias in Iraq have been carrying out missile attacks for the last few years but tensions are particularly high following the assassination of a senior Iranian nuclear scientist last month and ahead of the anniversary of the killing of a senior Iranian general by the US in Iraq last January.Iranian leadership is also likely to be on edge after it was reported last month that President Donald Trump had asked senior aides for options to strike Iranian nuclear sites.Vice President Mike Pence, Secretary of State Mike Pompeo, acting Defense Secretary Christopher Miller and Chairman of the Joint Chiefs of Staff Gen. Mark Milley were among the senior advisers who convinced the President not to pursue a military strike, according to The New York Times.

The tensions also come as the US has reduced its diplomatic presence in Iraq and is in the middle of a drawdown to a force of 2,500 troops by January 5 that was ordered by Trump. The Trump administration policy is that if any militias were to attack and kill Americans, then the US would respond with some type of strike against militia sites.

While the US continues to watch Iranian threats closely, the senior general in the Middle East, Kenneth McKenzie, said Thursday that he believes the US has “achieved a certain level of contested deterrence.” CENTCOM Commander McKenzie’s focus has been on maintaining enough US firepower in the region to demonstrate to Tehran that the US has the capability to respond to an attack.

Concern about danger of miscalculations

The enduring worry is that miscalculations by the militias or the Iranian government could lead Trump to order a strike on Iran in his final days in office, several officials say. US officials emphasize strongly that they don’t believe Iran is looking for armed conflict in those last days but would rather wait and see if it can negotiate with President-elect Joe Biden’s team once it takes office. But these latest military moves underscore the continuing concerns among US defense officials and the importance of maintaining a high level of readiness in the region.

The worries about the January 3 anniversary of Qasem Soleimani’s death were underlined Thursday by McKenzie, who said the Iranian government is still under “pressure to avenge the death of Soleimani.”

At the same time, Iran has moved defensive military systems to its coastal areas in the days since the assassination of one of its premier nuclear scientists last month, according to several US defense officials. The US assesses the defensive military moves are a sign the regime may be “rattled” and is preparing for what it believes could be an attack by Israel or the US, according to the officials. The US assesses Iran has increased and maintained its military readiness since the November 27 assassination of Mohsen Fakhrizadeh. US officials have said they believe Israel is behind that killing. 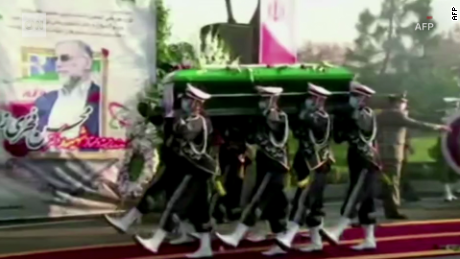 While Iran’s military moves are defensive for now, officials say they are set up if the country’s leadership decides to launch any type of attack against the US or Israel. The recent defensive moves include dispersing some ships at sea, including mine-laying ships into the Strait of Hormuz area. Some ships are being left in place longer than the US anticipated. Officials could not offer detailed timelines due to the sensitivity of the information but said there is no indication new mines are being laid at this point.

For its part, the US military is trying to maintain a strong deterrence presence to signal it is ready to defend against aggression. Two B-52H US-based bomber aircraft flew in a “short-notice, non-stop” mission to the region from Barksdale Air Force Base in Louisiana to demonstrate an ability to project power over thousands of miles.

It was the second such mission in as many months. The aircraft carrier USS Nimitz is in the Gulf region to help provide security as those US troops withdraw, but it is due to leave in the coming weeks, so the presence of land-based bombers and fighter jets could increase to fill the void.

Overall, the Pentagon is continuing to assess three areas of immediate concern in the region: what adversaries might decide to do as the Trump administration draws to a close, the drawdown of US troops in the area and the general level of uncertainty — including the role Israel could play that would lead to miscalculations on either side, officials say.