After 21 years of incarceration and painstaking efforts to fight his contentious conviction, it was a whirlwind when rapper McKinley “Mac” Phipps Jr. was granted early release in June and walked out the door just a few hours later.

He was greeted by his wife, stepdaughters and manager, and they headed straight for a New Orleans old-school classic he’d been craving: shrimp at Dunbar’s.

That night, his friends, parents, siblings and extended family all came together to welcome him at a hotel. “It was still all surreal at that point,” he said. He got home at 8:45, just in time for the 9 p.m. curfew mandated by his parole.

Two months later, the former No Limit Records artist is still figuring out life as a free man after spending half of it locked up for a crime that another man confessed to.

Phipps told HuffPost that he starts most mornings with a long walk with his wife Angelique, taking in the sights of their Uptown, New Orleans, neighborhood. It’s not far from Broadmoor, the neighborhood he grew up in, though it all looks different now.

“New Orleans has flipped since Hurricane Katrina,” he said of his hometown. “You have white people in places that they never were before.”

After their morning walk, the two get to work piecing together the plans they spent hours ruminating over as they imagined his someday release.

They’ve secured space for Phipps’ studio that adjoins an office for Angelique. He does some work at his mom’s fine art studio, home to her activism focused on Louisiana’s broken criminal justice system and wrongfully accused prisoners. A couple of days a week, Phipps volunteers with a nonprofit, Son of a Saint, which provides mentorship to young boys growing up fatherless in New Orleans due to death or incarceration.

And, for the first time in his life, he’s spending time with his 21-year-old son outside of prison.

Mac Phipps with his son, McKinley “Taquan” Green, who raps under the name Bandana Kin. Green grew up in Baton Rouge, where Phipps was living when he was arrested. “His music is probably, I would say, most influenced by his upbringing and the sound of his area,” Phipps said. “It was tough for him. It was rough. And I think his music reflects that.”

McKinley “Taquan” Green was born three months after his dad was arrested, while Phipps was still awaiting trial. The rapper never expected he would miss his son’s entire childhood.

“I watched him grow up, literally, through a visiting room,” he said.

And even though they talked on the phone and wrote to one another, Phipps says he still missed the real, important moments.

The two are close, but also still getting to know each other in the real world. They talk about music ― Green is a rapper, too ― and sometimes play basketball. “He reminded me that I’m an old man,” Phipps laughed. Since Phipps’ release, he’s been volunteering with Son of a Saint, a Black-led nonprofit that supports and creates pathways for young men growing up fatherless in New Orleans.

Phipps’ work with Son of a Saint is a continuation of a passion ignited in prison, where he mentored struggling young men while participating in an assortment of other volunteer programs. Mentorship began, in part, as an avenue for Phipps to connect with his own son.

“It’s my way of giving back and helping those young men who were victims of this same injustice cycle,” he said. “Their fathers, many of whom were taken away, for whatever reasons. Sometimes their fathers were guilty of crimes. But nevertheless, these young kids, they’re innocent.”

Bivian “Sonny” Lee III, the founder of the organization, said Phipps seems to really hear the boys. “It wasn’t really about him,” he said. “It’s been about them.”

The first time Phipps met the mentees, Lee recalled, he started out by getting to know them. When he eventually got to talking about himself, mentioning he’d been in prison until a week before, it caught them off guard.

“You could kind of see the boys, they were sort of taken aback, you know, and kind of looked at each other. And then [Phipps] said, ‘Do you know Master P?’” Lee recalled. “And of course, they said yes, and I think he connected to them through music.”

“I do feel like he has a very close connection to our work because of his relationship to his son,” Lee added. Mac Phipps (center) at Club Mercedes in Slidell, Louisiana. A rising star at the time, he was signed to Master P’s No Limit Records alongside artists such as Snoop Dogg and Mystikal.

Before Phipps was arrested in 2000, he was on the cusp of stardom on the New Orleans music scene. Signed to one of the hottest hip-hop labels of the ’90s, he released two solo albums and rapped alongside Master P, Mystikal, Silkk the Shocker, Krazy and C-Murder in 504 Boyz, the No Limit group that went gold with their 2000 album “Goodfellas.”

That all came to an end with the shooting death of a teenage fan, Barron Victor Jr., at Phipps’ show in a Slidell nightclub.

Phipps was arrested at home later that night and didn’t go home again for 21 years. The following year, a jury found him guilty of manslaughter. He was 23.

Phipps has long maintained he didn’t do it. Significant evidence supports his innocence: The prosecution had no forensic evidence; another man’s confession was dismissed; multiple witnesses revealed to HuffPost years later that they were coerced by prosecutors into testifying against Phipps. They came forward after the former district attorney, who led the prosecution, left power. That man, Walter Reed, was sentenced in 2017 to four years in prison on fraud and corruption charges.

On trial, Phipps’ lyrics and gangster rap persona were wielded against him. Selectively chosen lyrics, along with his “Mac the Camouflage Assassin” moniker, were used to portray him as a violent man capable of murder. The all-white jury was quoted lyrics from one of Phipps’ best-known songs, “Murda, Murda, Kill, Kill,” spliced with altered excerpts from another song.

“I just think that they had the person they wanted and they really didn’t want to hear anything else, anything that was in opposition to that,” Phipps said.

Revisiting this dark history, he seems remarkably at peace.

“At one point in my life, [that name] had a very negative connotation to it,” he said when questioned about the former district attorney. “But I’ve learned to forgive.”

“It is my hope that others who take on that job see what happens to guys that use that office for the wrong reasons.”

Asked how he feels about everything now ― “frustrated, relieved, happy?” ― he said it’s “definitely” only the latter two.

“I had to be, you know,” he said. “I was always looking forward, always waiting for this day. And envisioning this time, anticipating it, is what gave me hope and kept me sane through this process.”

Now 44 years old, Phipps is finally set to release his first new song in 21 years. Like the rapper himself, the trappings of his old music are there, but they look and sound a little different now.

“I think it evolved with me,” he said. “I’m a much more mature person, so I guess I think the music reflects that maturity. And I think people will enjoy it.”

He wrote the track “21 Summers” a few months ago when he was on work release at a shipyard in Lafourche Parish awaiting news of his likely release.

“I was in the bottom of a boat, fire watching for one of the welders, and I wrote it. It was basically me anticipating my freedom and what it would feel like,” he said.

Phipps said that feeling was best represented by the song’s opening line:

“I couldn’t tell ’em what it feels like, but I can tell ’em it feels right.”

Two months on, there’s still so much for Phipps to figure out about freedom as he grapples with the “culture shock” and “sensory overload” of technology and life outside in 2021.

At the turn of the millennium, when Phipps was put behind bars, social media was in its infancy. People burned CDs to share music with their friends. The popular file-sharing service LimeWire was just being founded, and the very first iPod would come out the following year.

“I actually love the way the music business is now,” said Phipps, whose new music will be released on all the major streaming services. “I love the fact that, you know, there is no barrier between the artist and the audience anymore.”

“You had to press up flyers, post them everywhere, send people out to radio stations and you had to physically go promote this stuff back then,” he recalled. “And now everything happens at the click of a button.” 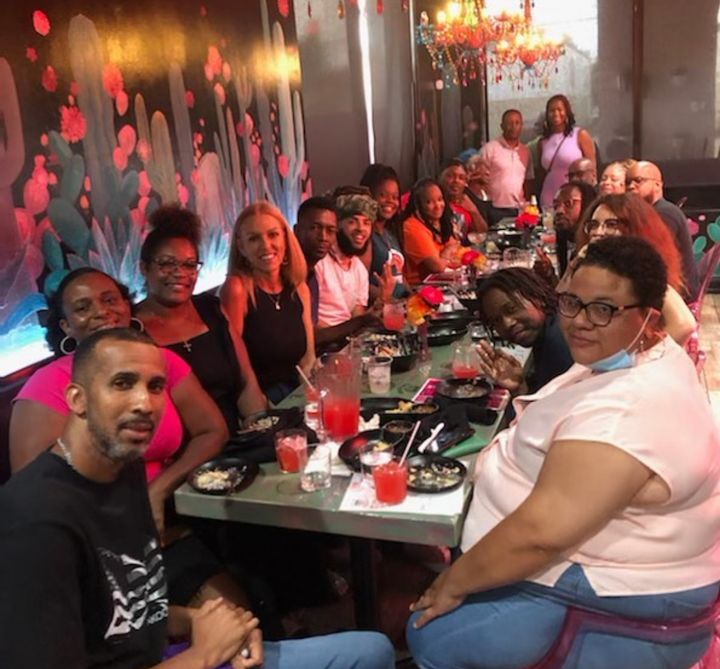 Phipps has been spending time at his studio, working with his mom at her art studio, and reconnecting with friends and family.

Though Phipps was granted clemency, he was not exonerated. Under his parole conditions, he has a 9 p.m. to 6 a.m. curfew, can’t attend venues that serve alcohol and must complete six hours of community service a month. He’ll probably be seeing a parole officer for the best part of the next decade.

The jury that convicted Phipps was divided 10-2. At the time, Louisiana was one of only two states that allowed split jury verdicts to convict. That law, a remnant of the Jim Crow era, was ruled unconstitutional by the Supreme Court in 2020.

After the Louisiana parole board had already recommended Phipps for immediate parole earlier this year, Phipps and his legal team nonetheless launched a bid to reverse his conviction based on the change in the law. But their hopes fizzled when the Supreme Court decided in May that the ruling wouldn’t apply retroactively.

While Phipps has no immediate plans for his next legal move, he said he’ll always be open to reexamining his case.

For now, his priority is to just keep doing what he’s doing. He hopes to start performing again — but under the limitations of his parole, it’ll hinge on whether he can get permission.

After “21 Summers” drops next month, Phipps says his path forward isn’t set in stone. He’s got more in the works, but his big-picture goal is just to keep creating and sharing music that lifts people up.

“It really is something that I would do if I never make a dime doing it because I love it,” he said. “This is my way of expressing myself.”