In a year of losses, something gained: Theater, artfully filmed

For much of 2020, the theater has been accessible only by screen. This is like experiencing the cold through a picture of a snowman. It’s obviously not the same thing. But in a year of manifold losses, plays and musicals have found ways not simply to survive but also to thrive in new mediums.

The Broadway productions of “Hamilton” and “What the Constitution Means to Me” reemerged as films that give a wider audience the best seats in the house. These are stage performances filmed and edited to preserve as much theatrical dynamism as possible.

Director Thomas Kail, who staged “Hamilton” on Broadway, captures on-screen how Lin-Manuel Miranda’s hip-hop-infused musical moves. The film, released by Disney+, allows us to feel the pulse of the original Broadway cast, with camera angles that slide from actor to audience view.

I first saw “Hamilton” off-Broadway at the Public Theater. When the show moved to Broadway, it wasn’t just a hit — it was a cultural watershed. The concept of casting performers of color in the roles of the Founding Fathers and their revolutionary associates was made more thrilling by the transformation of a group of solid working professionals into a company of stars.

The actors knew this was a career-making moment (Leslie Odom Jr., Daveed Diggs and Renée Elise Goldsberry wound up winning Tonys for their performances), and their awareness galvanized their playing. The audience was plugged into this circuitry at the Richard Rodgers Theatre. Tickets were impossible to come by. Just being there felt like history.

Kail’s film registers this excitement. The perspective, shifting kaleidoscopically from actor to character to spectator, is as choreographed as the show itself. Was my experience enhanced by having attended the show? My memory was certainly awakened by the screen version, but there was an added frisson of seeing the actors in closeup.

The film of “Hamilton” documents a theatrical milestone but lives in parallel to the original. I’ve seen the musical four times already, and though I’m not typically a repeat offender, I’d happily see “Hamilton” again onstage even with the movie available 24/7 on Disney+. Kail and company have whetted my appetite for another outing.

Heidi Schreck in Amazon’s “What the Constitution Means to Me.”

The same holds true for Heidi Schreck’s “What the Constitution Means to Me,” which I saw last year on Broadway and then in a production at the Mark Taper Forum in January that starred Maria Dizzia in Schreck’s role. The charm of the play is thoroughly intact on-screen. Watching the show on my laptop only intensified my admiration.

Who could have predicted that this category-defying performance work would be so comfortable in front of the camera? Part testimonial, part civics lesson, part game show, “What the Constitution Means to Me,” a guided tour through the legal struggle for equal rights and reproductive freedom, doesn’t play by the rules of traditional scripted drama. The play morphs, calls attention to its own shifting format, invites actors to break character and generally revels in its own liberty.

Marielle Heller’s film for Amazon Prime Video was shot during the last week of the show’s Broadway run. Much of the play consists of Schreck, who re-creates the oratory contests she excelled in as a teen, speaking directly to the audience. The tone is playful, but the subject matter is profoundly serious. While discussing landmark Supreme Court opinions, Schreck confides to us about the domestic abuse suffered by her grandmother and about her own decision to have an abortion as a 21-year-old.

The setup of the show presents some of the same filming challenges as stand-up comedy. But HBO and Netflix have shown what can be done in this genre, and Heller (on a hot streak after “Can You Ever Forgive Me?” and “A Beautiful Day in the Neighborhood”) advances these lessons in a work that is far more complicated aesthetically and emotionally.

Heller’s film gets us as close as technologically possible to Schreck’s physical performing presence. Cameras track the playwright-actor as she scrambles from one end of the stage to the other. The personal quality of Schreck’s interactions with cast members Mike Iveson and ace teenage debater Rosdely Ciprian — jocular one minute, deeply empathetic the next — palpably comes through.

Film has an advantage in monitoring subtle emotional shifts in a performance. One can see traumatic family memories washing over Schreck as she relates the difficult stories of the female relatives who came before her. When she recalls her younger self’s awkwardness, her cringe is humorously contagious.

Heller incorporates the reactions of audience members as they laugh, wipe away tears or simply listen. You can almost hear the filmed audience at the Hayes Theatre gratefully taking in Schreck’s words.

Liveness, the current generated when theatergoers coalesce their attention in the same physical space, can’t be replicated. But it can be intimated. As theatrical films, “Hamilton” and “What the Constitution Means to Me” depend on this source of vitality.

Spike Lee’s vibrant HBO film of David Byrne’s Broadway concert show “American Utopia,” another example of 2020 offering some recompense for all the theatrical losses, wouldn’t be the same without the accompanying euphoric roar of those in attendance. Indeed, the audible delight of the audience fuels our own, giving us permission to dance along in our living rooms to “Once in a Lifetime” and “Burning Down the House.” But even more traditional screen adaptations, such as George C. Wolfe’s stirring version of August Wilson’s “Ma Rainey’s Black Bottom,” are enlivened by glimpses of theatrical watchers and witnesses. The film, which can be seen on Netflix starting Dec. 18 after a limited theatrical release, begins with Viola Davis in full concert makeup as blues singer Ma Rainey whipping an avid crowd of paying customers into an ecstasy of honky-tonk.

This is as visceral a performance as you’ll ever see on-screen. Sweat and greasepaint sluicing off her, her gold teeth glinting in her mouth, Davis’ Ma Rainey reveals the way the blues are wrung not just from a voice but also from a defiant body containing historical multitudes.

In inhabiting her character’s full frame, a padded Davis makes clear that to understand Ma Rainey you must confront her in the flesh. There can be no abstraction of this woman, no distancing of physical facts.

Davis’ commandingly earthy performance sets the tone for a film that creates enough theatrical freedom for the full range of Wilson’s playwriting. The drama unfolds at a recording studio, where Ma Rainey’s white manager is urging her to make a record on the white record company owner’s timetable, while she’s determined to use her leverage to get more respect, if not a better deal, from those exploiting her moneymaking gift.

As this tug of war intensifies, a different artistic struggle plays out among her band members. An ambitious trumpeter named Levee (a potent Chadwick Boseman in his last role) cares more about artistic integrity than a paycheck. He wants to express himself through the music, but Ma Rainey and the suits are in charge. Despite all that he has suffered, Levee isn’t yet willing to go along to get along.

The character has these ferocious riffs that build toward a confrontation with God for allowing so much injustice to rain down on Black people. This is writing meant to be performed on a stage, but the thunder that’s unleashed seems completely natural.

Boseman brings to this anguished scene the same embodied truth that Davis delivers in the title role. To say the film left me pulverized is to acknowledge the power of great theatrical acting in any medium. Jim Parsons, left, and Matt Bomer in Netflix’s “The Boys in the Band”

If theater has an inherent edge in proximity, film and television have the advantage in reach. This year, Ryan Murphy has brought to a wider audience via Netflix Mart Crowley’s landmark drama “The Boys in the Band” and the 2018 Broadway musical “The Prom,” two works advancing the conversation on LGBTQ acceptance, past and present.

Joe Mantello’s 2018 Tony-winning revival of “Boys” was filmed with the Broadway cast, led by Jim Parsons and Zachary Quinto and featuring a flat-out sensational Robin de Jesús in the flaming role of Emory. Produced by Murphy, the movie version took some cinematic liberties but was largely faithful to the dramatic situation of a group of gay men reckoning with their pre-Stonewall lives at a birthday celebration that begins in comedy and ends in psychodrama.

“The Prom,” which Murphy directed himself, is a splashy camp-fest of a musical about a bunch of Broadway hams who take up the cause of Emma (Jo Ellen Pellman), a lesbian high school student in Indiana whose prom has been canceled to prevent her from attending with her girlfriend (Ariana DeBose). With a starry cast that includes Meryl Streep, James Corden and Nicole Kidman, the film delivers its progressive message about tolerance to the heartland.

Neither screen version is entirely comfortable in the medium. Adaptation is a fraught enterprise, and celebrity casting isn’t an unalloyed benefit. (The original 1970 film of “The Boys in the Band,” with its lower profile cast, remains for me definitive.) But Murphy is clearly taking inspiration from the theater’s long-standing commitment to LGBTQ equality, and it was heartening to see this moral mission on such a grand and glitzy scale.

Nothing can replace being inside a theater. Nothing can replace the feeling of a group of strangers transforming over the course of a play or musical into a collective body known as an audience. But in this difficult pandemic year, directors have found ways of transmitting the power of an indestructible art form. 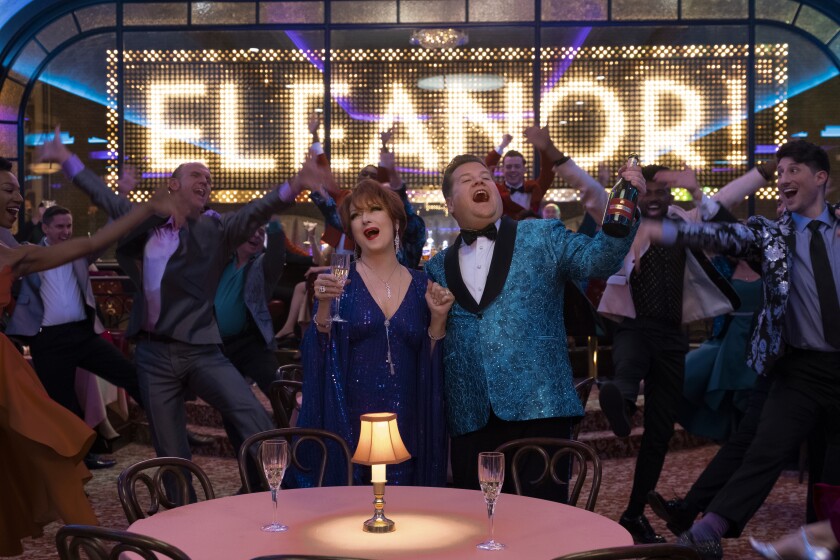 Meryl Streep and James Corden in Netflix’s “The Prom”