Go north, you said. This was in spring, when my list of favorite outdoors California places included too few redwood trees.

So I went on assignment twice this summer to this state’s northernmost reaches — once to paddle the Klamath River with Yurok boatmen, once to pedal a strange contraption through the woods near Fort Bragg.

On the way, I did enough eating, exploring and sleeping to come up with these 22 ideas for anyone visiting coastal Mendocino, Humboldt or Del Norte counties.

The list begins in Mendocino County, pauses in the old logging town of Fort Bragg, and continues north, ending just shy of the Oregon border. Be aware of water shortages and check on the status of forest fires before you make any travel plans.

1. There’s a good chance you’ll start your trip with a flight to San Francisco or Santa Rosa. Either way, that gives you a shot at one of the state’s greatest drives, California 128 through the Anderson Valley. It takes you from the hot and hilly Sonoma County wine country into the dense forests of Mendocino County. From there, it flanks the Navarro River on its winding path to the rocky coast. On the way, you could stop at any number of wineries, including Roederer, Goldeneye and Navarro. 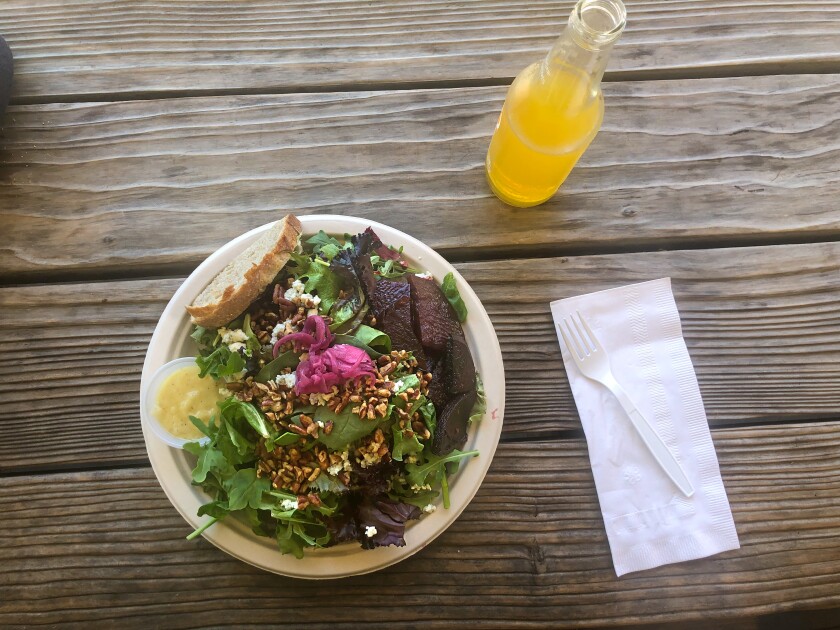 A meal from the Boonville General Store in Mendocino County. 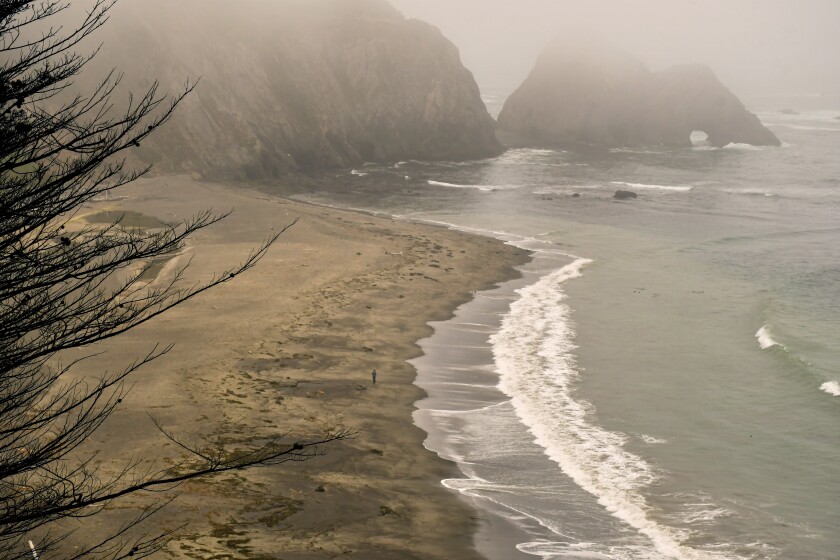 3. At Elk, 17 miles south of Mendocino, you can wander the black sands of driftwood-filled Greenwood State Beach. If your wallet is prepared, consider the Harbor House Inn, a remarkable haven that opened in 2018 after an extensive rehab. It has 11 upscale rooms and cottages (roughly $500 per night and up), great rocky coastal views, a private cove and a world-class restaurant led by chef Matthew Kammerer (tasting menu $220 per person). Local ingredients abound, including cod, kelp, hemp and abalone. Bay Area weekenders keep this place busy — in fact, they seem to be keeping the entire redwood coast busy this summer. The 25-seat dining room is closed Tuesdays and Wednesdays, which meant I didn’t get a chance to eat. 4. The Little River Inn, an impeccably sited lodge above the shoreline south of Mendocino, is a different overnight option. It has a nine-hole golf course and tennis court. It also has all the quirks you might imagine from a fifth-generation family business that has been renting rooms since 1939. The indoor dining room and bar were closed to customers the night I was there, but it’s not too tough to eat breakfast in your room next to your fireplace. From the back deck, I could glimpse waves through a scrim of fog and eucalyptus trees. Summer rates start at about $250 a night. Book well ahead. 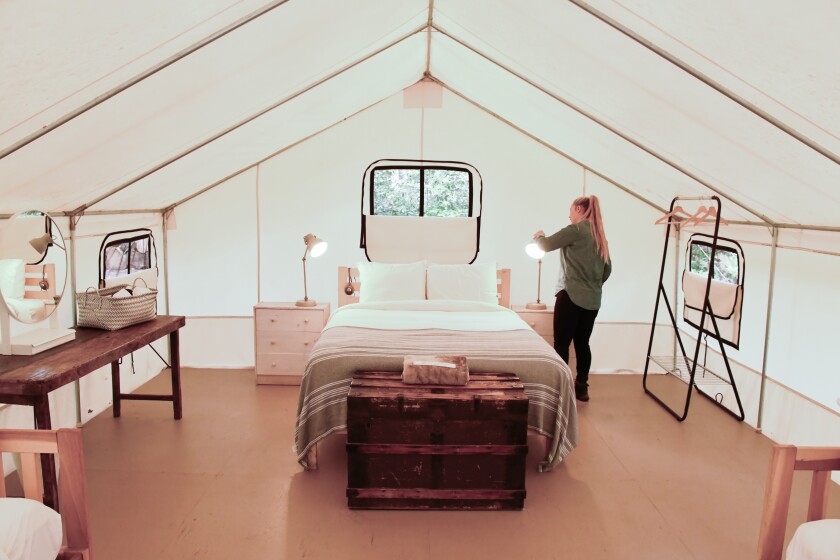 A Mendocino Grove staffer adjusts the lights in a family tent.

5. Just south of Mendocino, there’s a more rustic lodging option: Mendocino Grove, a 37-acre hillside platform-tent campground, open through Sept. 1. It has plenty of youthful energy, heated mattress pads, forest views, fire pits, picnic tables and glimpses of the ocean. Rates from $189 a night. It’s not quite glamping — all bathrooms are shared — but the 60-plus tents are inviting, especially the larger family ones. 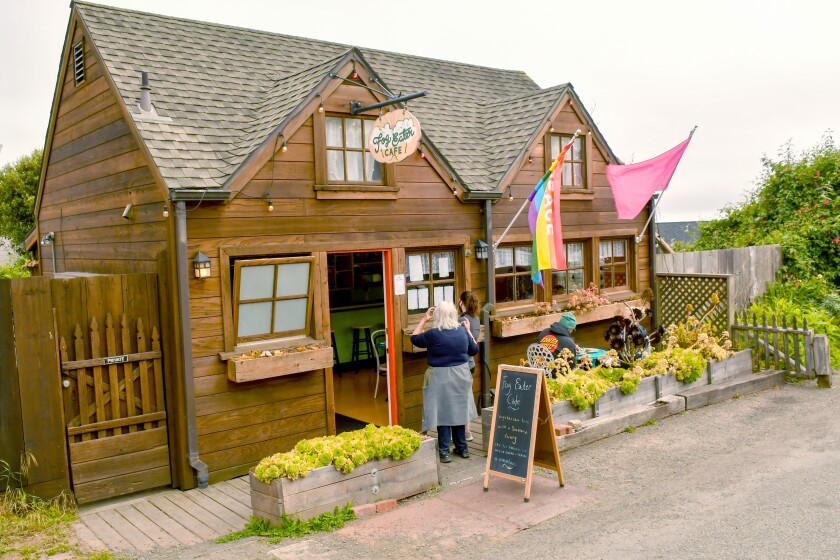 6. My favorite meal was at Fog Eater Cafe in Mendocino. The cafe, which opened in 2019, includes a tiny dining room (yellow floor, orange wall) with a patio out back. The kitchen serves “California cuisine with a Southern twang” and a vegetarian spin (dinner Wednesdays-Saturdays, brunch Sundays). Barbecued lima beans. Grilled cabbage. Creole mac and cheese. Almost the entire menu is vegan, which made me nervous about flavor. Silly me. Zesty flavors, deployed with wit. Portions are smaller than Southern cooks favor, but I came away full enough. Get there early or expect a line; it doesn’t accept reservations. Meander on the Mendocino Headlands, which has an eerie sea cave.

7. The rest of Mendocino hasn’t changed much: The hyper-quaint mix of boutiques, galleries, manicured yards and well-restored Victorians is as comforting as ever — or, as twentysomething traveler Marlowe Kulley of Reno put it, “bougie” and “perfect for my mother.” Gallery Bookshop still has a terrific selection. Dick’s Place, a hole-in-the-wall bar, persists as the least precious joint on Main Street. On Albion Street, the Temple of Kwan Tai is a reminder that in the 1850s Mendocino had hundreds of Chinese residents. And if you’re up for a little walk, meander on the Mendocino Headlands, which have startling views and an eerie sea cave. 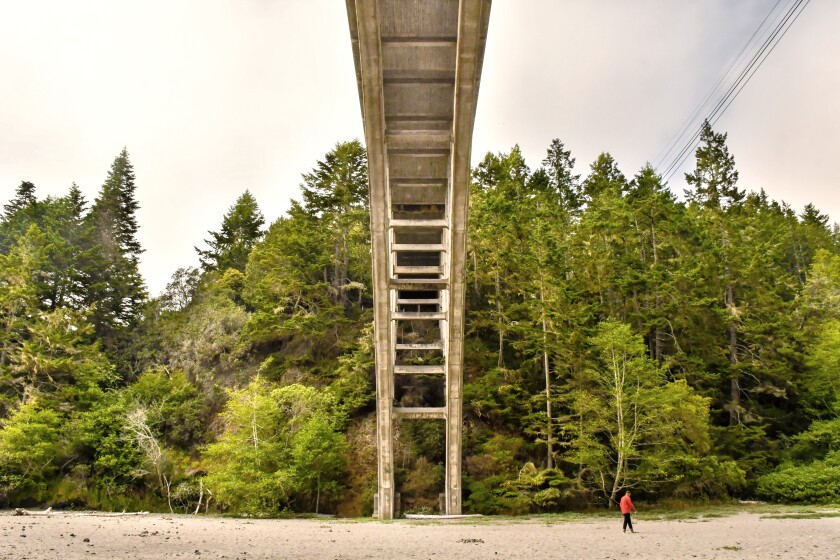 The bridge in Russian Gulch State Park in Mendocino County might remind some of Bixby Bridge in Big Sur.

8. There are several good, rugged beaches between Mendocino and Fort Bragg. I was drawn to Russian Gulch State Park, a lonely beach beneath a high bridge (it will remind you of Bixby in Big Sur) surrounded by rocks, tall trees and tall trees growing from rocks (don’t ask me how). A few miles farther north, near the hamlet of Caspar, there’s Jug Handle State Natural Reserve, where, were I more devoted to geology, I would have hiked the entire 2½-mile Ecological Staircase Trail instead of just the first bit. 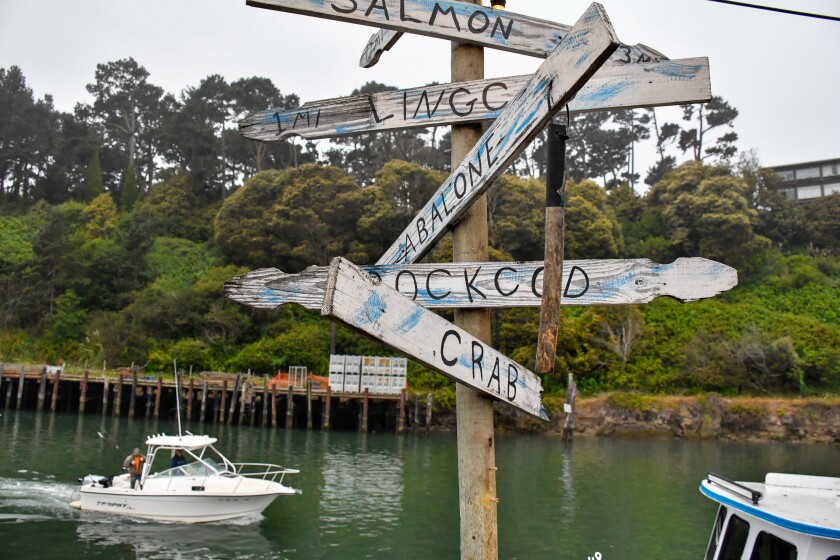 9. On to Fort Bragg, 10 miles north of Mendocino. The city’s Noyo Harbor has been rough around the edges for decades, but now there’s new energy in this damp netherworld. For an upscale overnight, try the Noyo Harbor Inn, built in the 1860s and reopened after a painstaking rehab in 2017. Or eat at the inn’s HarborView Bistro. 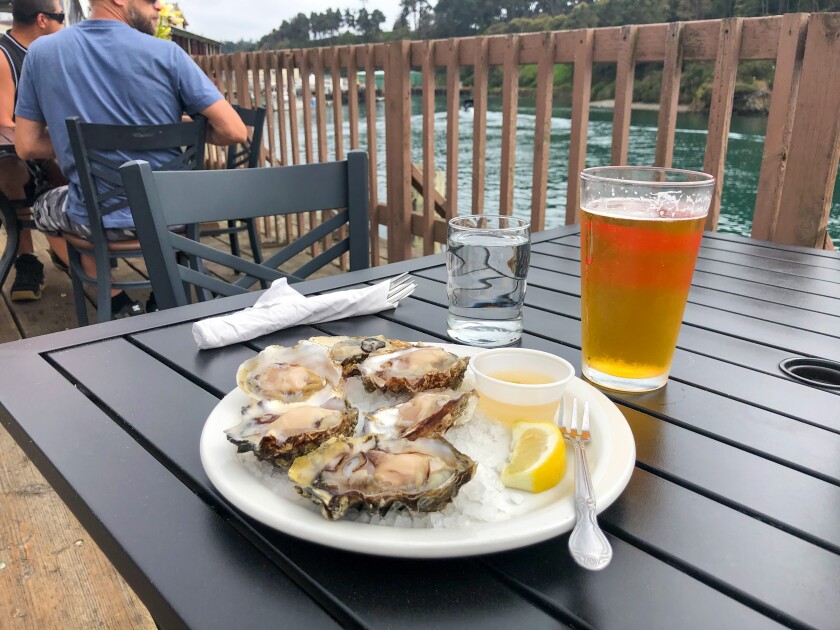 Enjoy the views from the dining deck of the Noyo River Grill.

10. For a grittier waterfront scene, find the Noyo River Grill, opened in 2018. (I recommend the chilled oysters.) Not far from the harbor are stalwarts such as Sea Pal Cove (fish, chips and a great fire pit) and the perennially busy Silver’s at the Wharf.

11. A few doors from the Noyo River Grill stands the waterfront Princess Seafood restaurant , which opened this year to augment the nearby Princess Seafood Market & Deli. Both Princess locations (open Fridays-Mondays) offer seafood caught by an all-woman crew on a 42-foot boat whose name is … Princess. Of course. 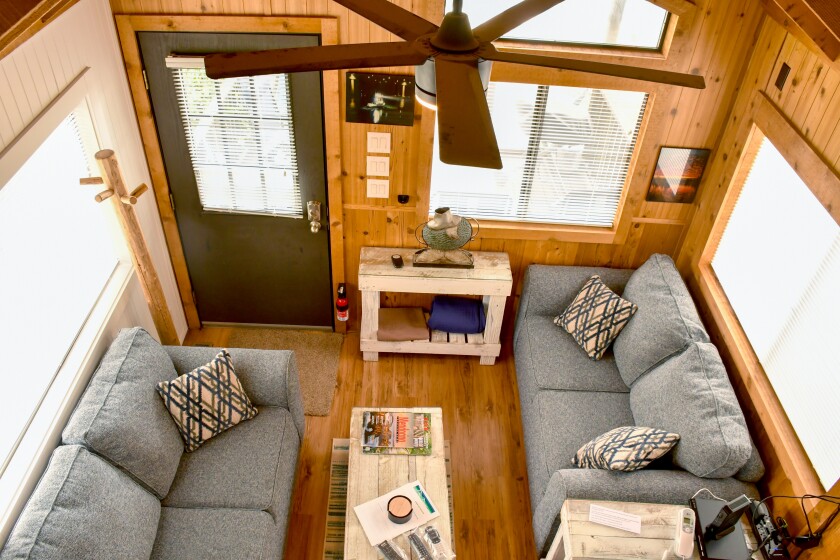 12. Another new venture is Sportsman’s Park, a.k.a. Pacific Blue Vacation Rentals — a funkified portion of a trailer park with four “tiny homes” (mobile homes in disguise), four trailers and one apartment. All are playfully decorated, and a couple of units are right on the harbor. It’s as raffish as the Noyo Harbor Inn is refined. Rates from $125 a night. When I asked Sherry Piver, the chief of housekeeping at Sportsman’s Park, how many travelers they’ve had in recent weeks, she said: “We are slammed. … I’m born and raised here and I’ve never seen it so fun down here.” 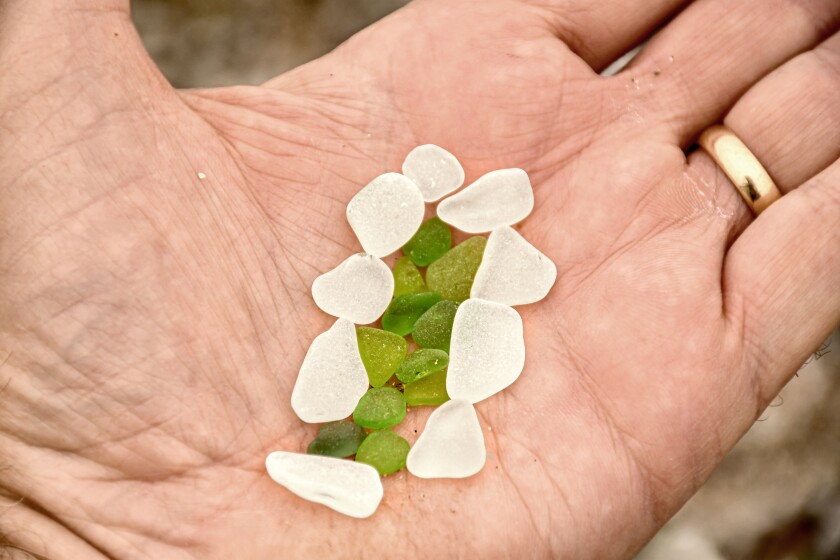 Pieces of glass from Glass Beach.

13. Glass Beach, a.k.a. Noyo Headlands Parkin Fort Bragg, once was a cool secret. Now it’s not so secret. I saw dozens of people sifting pebbles and roaming the sand despite overcast skies. The beach, site of a dump from 1906 to 1967, is full of green, brown and frosty white pebbles that once were glass bottles. It’s also a nice walk. Head north on the trails amid the sand, rocks and ice plant and you’ll reach MacKerricher State Park and the wooden Pudding Creek Trestle, a logging industry remnant you can stroll across. 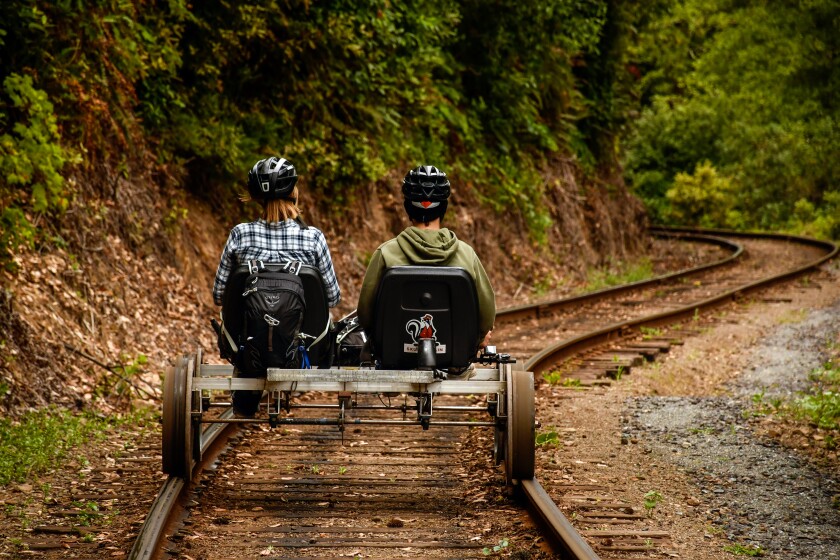 14. The Skunk Train, based in Fort Bragg, for decades has offered historic rides through redwood country, following tracks laid by a 19th century lumber company. But now there’s an option: railbikes. These two-seat, pedal-driven contraptions (with electric motors if you’d rather not pedal) take you through the woods and back, with a pause for a short hike. If you’re a thrill-seeker, the Skunk Train offers a longer, wilder ride that begins with a 1-mile hike, followed by a 25-mile round-trip pedaling excursion flanking the Noyo River. 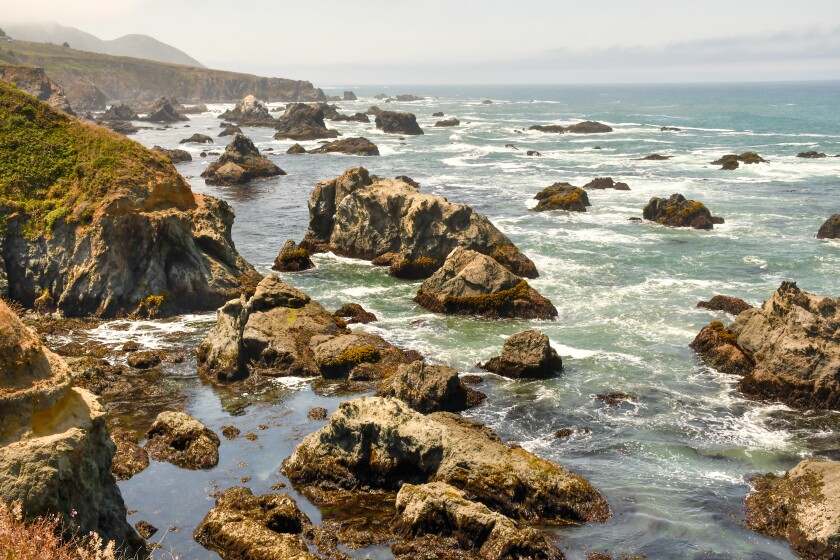 15. About 15 miles north of Fort Bragg, you find the village of Westport, where I may lie low if I ever need to escape the paparazzi or the feds. The Westport Hotel has six upstairs rooms (no TVs, no telephones) in an 1895 building, from $166 a night. The hotel’s Abalone Pub was preparing to reopen when I stopped by at the end of June. Meanwhile, the Westport Inn down the street has been renamed the Lost Coast Vista Inn (six units, $145-$165 a night). For a sandwich (or just about anything), stop at the Westport Community Store. For awesome views to the south, step across the coast highway and wander the Westport Headlands. 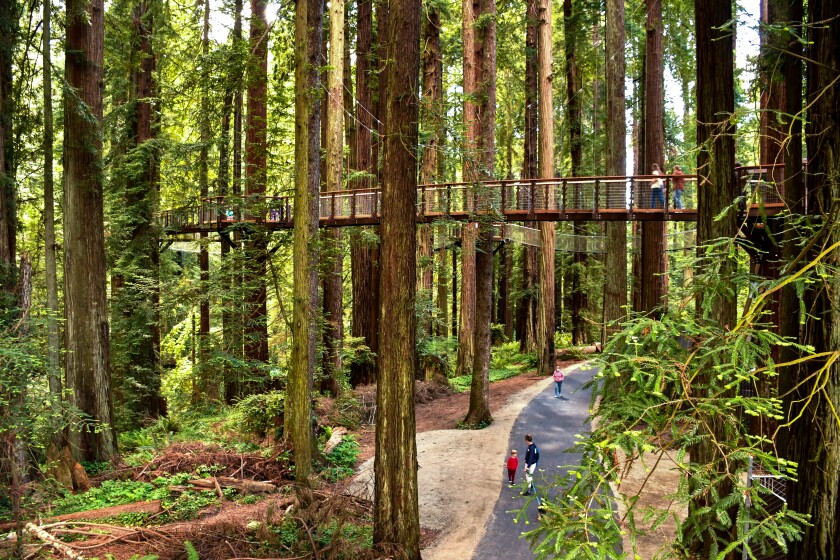 The Sky Walk opened in June at Sequoia Park Zoo in Eureka. Carson Mansion, built in 1884, is a Victorian landmark in Eureka.

17. In Eureka’s Old Town district along 1st, 2nd and 3rd streets, visitors can see several landmark Victorian structures that went up in the 19th and early 20th centuries, including the lavish Carson Mansion, built in 1884. Five Eleven Bar & Grill, on 2nd Street, is popular for its farm-to-table North Pacific cuisine. 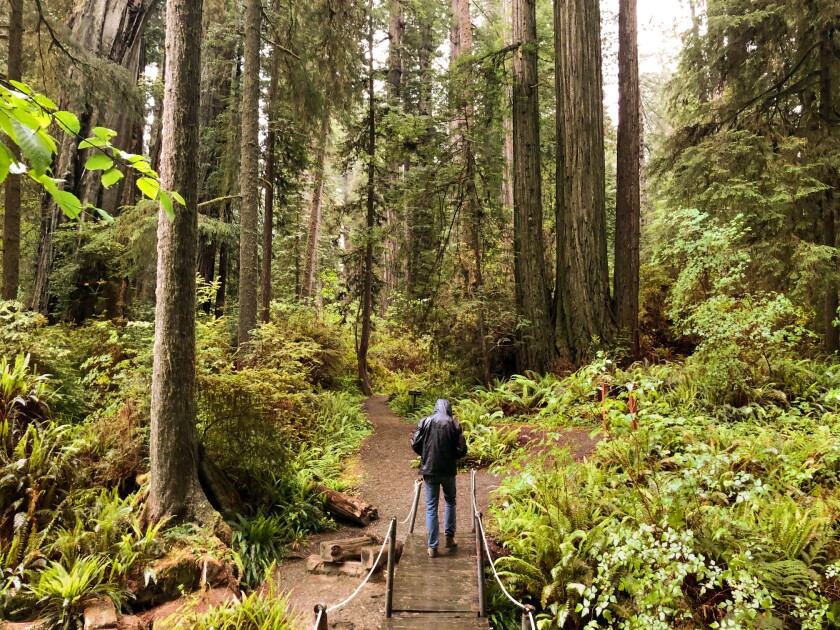 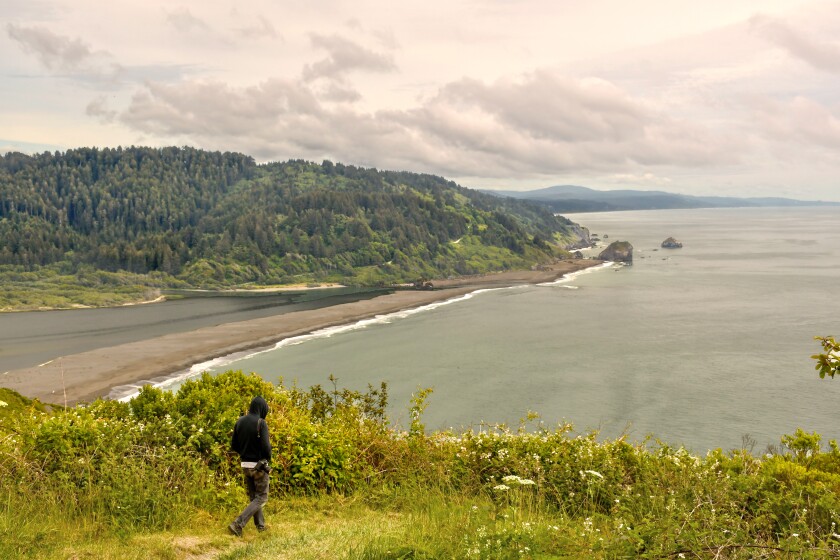 The Klamath River Overlook includes a commanding view and the start of a steep trail to the beach.

19. Klamath River Overlook, at the end of Requa Road in Klamath, offers the region’s best and broadest view of the river as it empties into the sea. From that overlook, you can hike a steep trail (one mile down and back) that takes you toward the water. I’ve been there twice, and the next time I’m in the Klamath area, I’ll go again. 20. Klamath Beach, accessible from Highway 101 and Klamath Beach Road in Klamath, is a natural and cultural site. If the tide is relatively low, you can park on the roadside and walk past traditional Yurok sweat houses and other structures to a sand spit where anglers cast between rock formations and seals play where the river and the sea meet. 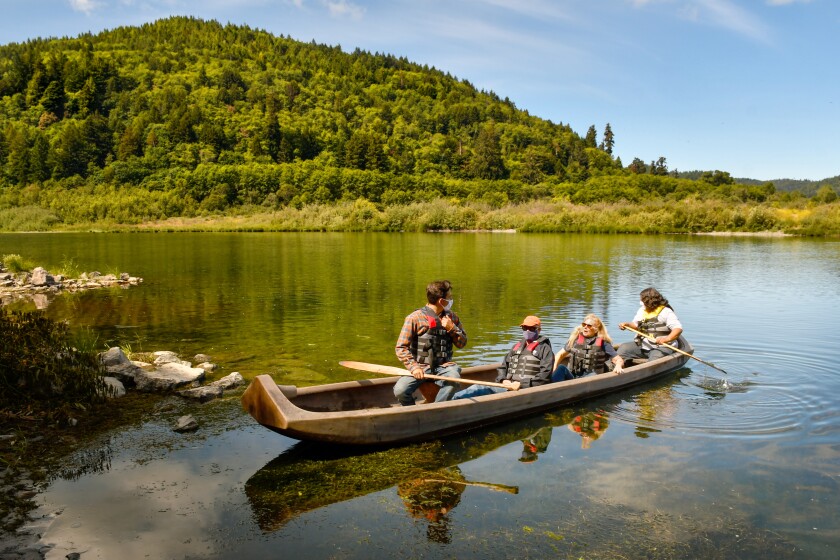 21. Redwood Yurok Canoe Tours, a 2021 venture by the Yurok tribe, offers visitors a chance to spend two hours on the Klamath River in a dugout redwood canoe — the same sort of vessel that Yurok members have been navigating for perhaps thousands of years. The tours, which begin and end in Klamath, are led by Yurok guides who share their cultural and natural history, including their hopes for a river renaissance once four upstream dams are removed in the next few years. 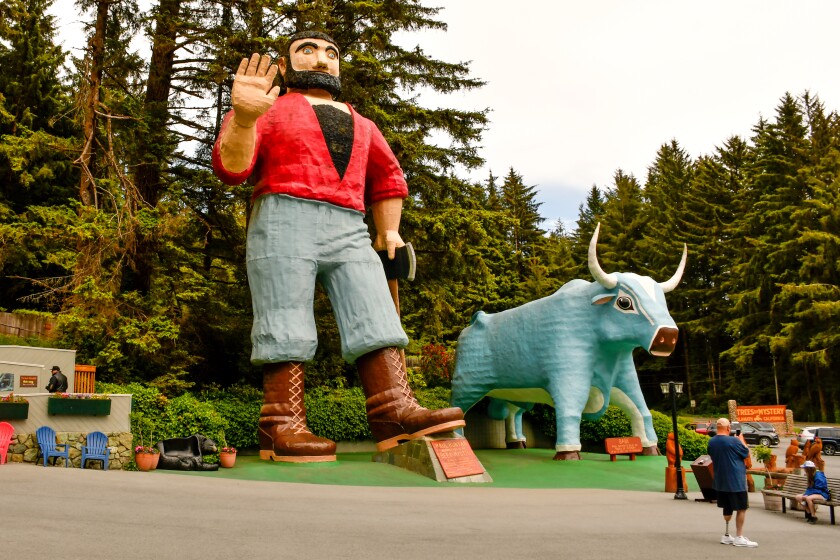 Paul Bunyan and his blue ox Babe are featured attractions at Trees of Mystery.

22. At the northern end of Klamath — 47 miles shy of the Oregon border — stands the kitschy Trees of Mystery A 49-foot-tall Paul Bunyan looms over the entrance, joined by his blue ox, Babe. As you settle in for that selfie, keep an ear out — Paul sometimes talks. In 2020 the management added the Redwood Canopy Trail, a medley of platforms and suspension bridges that takes visitors into the upper reaches of the big trees. If you’ve done Eureka’s Redwood Sky Walk, this one might be redundant. Then again, in a year that’s brought so little water and so much fire to California, what’s not to like about a little more time in these cool, wet, shady woods?