Want a different travel experience? Stay in an Airstream at one of these retro-cool trailer parks

Get a blast from the past when you book your next vacation at a trailer park resort that features vintage-chic travel trailers.

The parks, a retro trend, are popping up throughout the country, with a handful in Southern California. They feature refurbished campers from the ‘50s to the ‘70s and new-but-look-vintage trailers, many built by Airstream, maker of the “silver bullet” travel trailers popular in the 1950s.

What’s the advantage for vacationers? You can skip cookie-cutter hotel rooms in favor of a too-cute-for-words trailer in the great outdoors.

“We’re a hotel, but a hotel with a difference,” said Carey Jonker, who operates Waypoint Ventura vintage trailer hotel, a campground that rents 20 vintage trailers within walking distance of the Ventura shoreline.

“Some people are interested in a unique overnight experience. Our retro trailers are a cool component that makes them happy,” said Jonker, who co-owns the park with his twin sister, Kelsey.

Vintage trailers are usually rebuilt from the floor up, have funky-but-cute decor, air conditioning, heat and fully functional kitchens and are equipped with decks and outdoor furniture. Many have showers, flat-screen TVs and Wi-Fi. Most of the parks are multi-function, with spaces for RV owners, and feature amenities such as pools, playgrounds, rental bikes and outdoor games.

Janet and Pat Hoy of Morro Bay explore their vintage trailer at Waypoint Vintage in Ventura.

A resurgence of interest in the shiny-skinned Airstream trailer has brought new devotees into the fold.

This year, as the company celebrates its 90th birthday, it has found a new audience that admires its nostalgic cachet. Matthew McConaughey, Sean Penn and Sandra Bullock are among its fans. Airstream’s new vehicles have become so popular that the company says it may take a year to fill current orders.

Most trailers in vintage-chic parks are Airstreams; some parks, such as AutoCamp, with campgrounds near Yosemite and the Russian River, and Caravan Outpost, in Ojai, use only Airstreams.

But other brands also have fans. Dozens of organizations cater to specific trailer owners, such as Forest River Owners Assn., Sunliners Owners Club and Classic Winnebago.

And some owners, such as Chryss Terry, dote on their own specific trailer. She calls hers the “Hollywood Glamper“ for good reason. It had plenty of screen time in Quentin Tarantino’s 2019 film “Once Upon a Time in Hollywood” plus roles in Ryan Murphy’s television series “Feud” and a Vanity Fair feature with Angelina Jolie.

Terry, who partially restored the Glamper herself, lives in it at Waypoint Ventura, where it’s the Golden Girl of the campground. It has porthole windows, a yacht-like mahogany interior and a gold-anodized exterior.

“I didn’t know why I needed to restore this vintage trailer, but for some reason I was never so certain that was what I should do in life,” she said, adding that living in Waypoint “is not for everybody, but when I moved in something magical happened.”

If you like Airstreams, you’ll like Caravan Outpost in downtown Ojai. This pleasantly landscaped park, which opened in 2016, has 11 of them.

Owner Brad Steward describes it as “more upscale than down-home.” And it does differ from most parks in its décor — “we hand-built the space as a living artwork”— and in the activities offered. 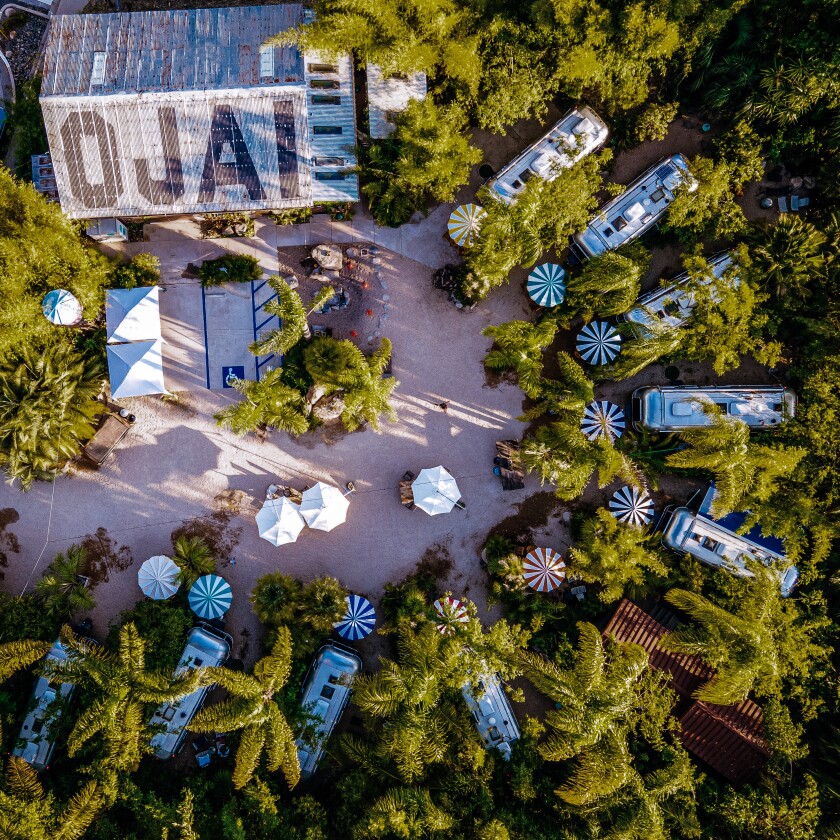 The trailers at Caravan Outpost in Ojai, CA.

Instead of the usual campground fun and games, Steward and his wife Shawn offer diversions similar to those found in hotels: guest chefs, wine tastings and movie screenings. “We want to give people an immersive experience,” he said.

The formula has caught on with a celebrity crowd, he said, name-dropping Pink, Natalie Portman, Bradley Cooper and Josh Groban, who he says played guitar at the fire pit. “One of the other guests told him he was astonishingly good and should do it for a living,” he said.

Float your boat in Lake Elsinore

Fishing, swimming, boating and water-skiing are among the attractions at Lake Elsinore, which calls itself the “extreme sports capital of the world” because it also offers sky diving, motocross and other edgy activities.

Now you can stay at the foot of this body of water — the largest freshwater lake in Southern California — in a vintage trailer park. Riverside County’s new RV campground Launch Pointe features a variety of RV sites, yurts and a Vintage Village, with eight trailers parked in a pleasant green glen.

Get inspired to get away.

Explore California, the West and beyond with the weekly Escapes newsletter.

You may occasionally receive promotional content from the Los Angeles Times.

The village has a nice sampling of Airstream and non-Airstream trailers. For the most part, the vehicles were manufactured in the ‘40s and ‘50s, but all have been restored and modernized, complete with air conditioning — a necessity in Elsinore when temps top 100 degrees.

The park offers pontoon and fishing boat rentals. There’s also a restaurant, pool and playground for the kids.

Get lost in Joshua Tree

The folks at the Hicksville Trailer Palace want to make sure their vintage campground doesn’t draw lookie-loos. So they won’t release the address until you book a trailer.

I did not do that. I found an address online and bounced around the desert for two hours looking for it. Locals gave me more incorrect addresses. Finally, I called the number on the website, admitted what I was doing and got complicated directions along dusty, nonpaved desert roads. Worth it? Sure. Hicksville Trailer Palace is one of a kind. The compound, which contains eight vintage trailers, a boat, a caboose and a cabin, was set up by an L.A. writer and director in 2010 as a place to work on films. Eventually, he opened it as a hotel.

Last year Rebecca Slivka and Erica Beers, thirtysomething friends, bought it after visiting as guests. “I think the trailers are funky and put you into a different time era,” Slivka said.

The trailers have been renovated and are air-conditioned, In addition, there’s a pool, a vape room, an archery and BB gun range, mini-golf and lots of other games. It’s a playground for adults.

And because of that privacy thing — the secret location — you won’t have to worry about anyone watching while you play.

If hiking or wine tasting are on your wish list this summer or fall, combine them with a stay in a vintage Airstream or other trailer at Flying Flags RV Resort and Campground in Santa Barbara County’s wine country. 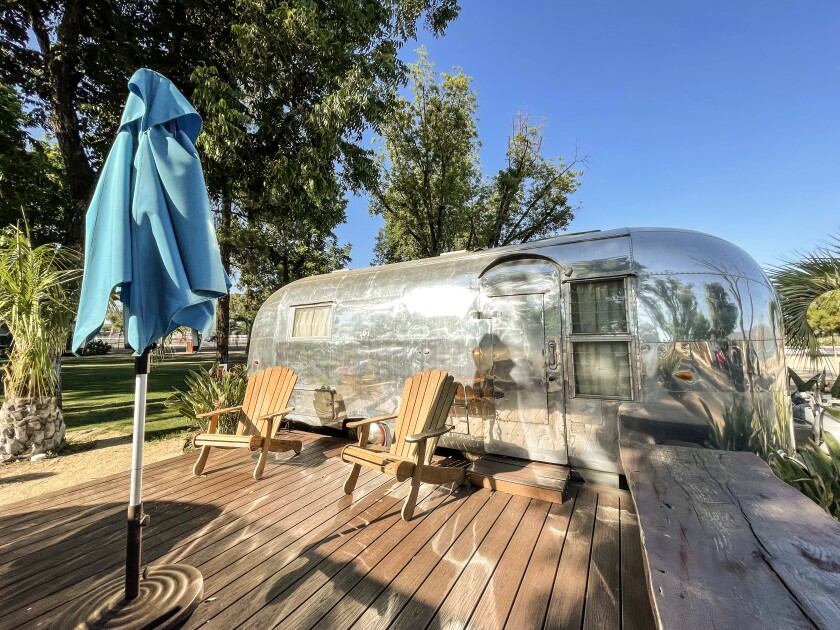 If you’re with a large group, you can stay in a canned ham compound, named after the round metal trailers popular in the ‘50s that resemble a big tin of meat.

When I visited the park earlier this month, I met Whittier resident Mattie Montes and a crew of 13 family and friends who were enjoying their stay in Canned Ham Village. The fenced-off compound contains three canned ham trailers and one Airstream, plus an outdoor kitchen and a restroom. “It’s good for all of us to be able to get together like this,” Montes said. “And the kids love the play areas.”

Make a splash in Ventura

A guest hangs lights on their van at check in next to vintage trailers at Waypoint, Ventura, CA.

Carey Jonker began renovating trailers in 2014. Now there are 20 at Waypoint Ventura, making it one of the largest collections of refurbished vintage trailers in the state.

“We have collected, restored and renovated a stunning selection from over nine manufacturers. Our search and rescue continues,” he said.

The units range from 1940s trailers to relatively modern Airstreams. Each includes individual decks, Frette linens and refrigerators. Guests can make use of complimentary bikes, lawn games and barbecues.