A restaurant in Barcelona is earning praise for its response to a couple of influencers who wanted to dine on its “best dishes” for free — amid financial hardships brought on by a global pandemic, no less.

Topik, an oyster bar and tapas restaurant in Barcelona’s Eixample district, was first presented with the proposition in late November, as seen in screenshots shared to Twitter by Topik. In it, the two “influencers” identifying themselves as Roberta and Mikel offered to sample the restaurant’s cuisine in exchange for posting photos and video on social media, documenting their experience.

The “incluencers” claimed they would post “attractive photos and videos” following their free meal, which would “bring clients who still do not know your place or who have forgotten your existence.”
(iStock)

“As you know, nowadays having visibility on social networks is essential to get new ones,” they wrote, per a translation of their message. “Having your restaurant in our profiles a great opportunity to attract a new clientele. In addition to promoting your site around the world and especially in Barcelona.”

Roberta and Mikel — who boasted 22,000 followers and “an average” of 1,000 “likes” per post — went on to claim that they could post “attractive photos and videos” on their feed, which, in turn, would “bring clients who still do not know your place or who have forgotten your existence.”

The two ended the message with a promise to “see you soon.”

Topik’s response, however, makes it clear that they want nothing to do with Roberta and Mikel.

According to a screenshot of the restaurant’s response, Topik scolded Roberta and Mikel for trying to take advantage of a struggling business during one of the worst health crises in modern history.

“Have you noticed that there is a current pandemic and that restaurants in Barcelona have a limited capacity of 30% and time limitations?” the restaurant replied. “I’m telling you this because asking at this point seems to me [to show] a bit of a lack of empathy on your part.”

The restaurant went on to claim that many of its workers were on Spain’s ERTE (Expediente de Regulación Temporal de Empleo) program, which allows employers to issue furloughs or cut back on staffers’ hours while still providing benefits or reduced pay, and allowing those same employees to file for unemployment benefits.

Topik also bemoaned their actions at a time when Spain’s citizens were supposed to be acting like “better people.” 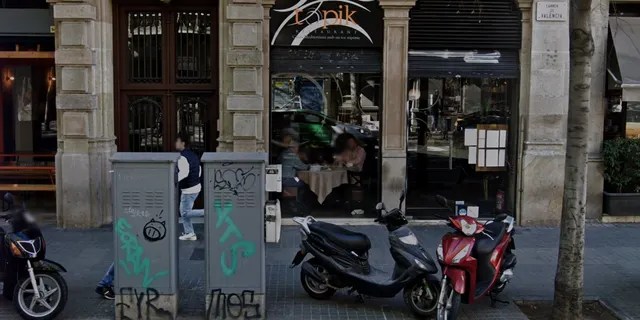 Topik, a restaurant in Barcelona, bemoaned the actions of the “influencers,” especially at a time when the country was told its citizens should be acting like “better people.”
(Google)

Twitter users, some of whom alleged to have identified the “influencers” who reached out, were quick to applaud Topik for calling them out.

“Very good answer. This pandemic is about solidarity and responsibility. Some have not understood,” one commenter wrote.

Another commenter, who boasts 25,000 followers on Instagram, claimed he would never think of taking money from a restaurant.

Still, not everyone thought the “influencers” were out of line. At least a few reminded the restaurant that “advertising” is not free, and if Topik didn’t like the pitch, then they were free to turn it down.

A representative for Topik did not immediately respond to a request for comment.