Good morning and welcome to Fox News First. Here’s what you need to know as you start your day …

Cruz explains why he agreed to argue Pa. election case if Supreme Court takes it up
Sen. Ted Cruz, R-Texas, told “Hannity” Monday that he agreed to present oral arguments before the Supreme Court in a key election-related case — should the high court take the matter up — because the matter “raises very serious issues.”

The case brought by Rep. Mike Kelly, R-Pa., and Pennsylvania GOP congressional candidate Sean Parnell, alleges that a 2019 state law allowing no-excuse mail-in voting is unconstitutional. If the court agrees, according to KDKA, Kelly and Parnell said most of the commonwealth’s mail-in votes in this past presidential election could be thrown out.

“It raises pure issues of law, and I believe the Supreme Court should choose to take the case,” Cruz told host Sean Hannity. “I think they should hear the appeal.” CLICK HERE FOR MORE ON OUR TOP STORY.

In other developments:
– Dershowitz explains how Supreme Court could get involved in Georgia election challenge
– Hannity tells Georgia voters: You have ‘every right to be disgusted’ but ‘we need you’
– Alito moves up Pennsylvania’s response date on emergency application to day before safe harbor deadline
– Arizona legislature closes as Trump lawyers push for special session to pick electors
– Giuliani: Push for legislatures to pick electors is ‘furthest along’ in Georgia

Gordon Chang warns China is ‘going to push a President Biden around’ and US must ‘push back’
President-elect Joe Biden will be little match for the “incredible arrogance” of the Chinese government, China expert Gordon Chang warned on “Tucker Carlson Tonight.”

“They’re going to push a President Biden around,” Chang told host Tucker Carlson. “They’re going to do things which are dangerous, because we’re going to have to push back. Under President Trump, the Chinese didn’t try this because they were afraid of him. So what I’m concerned about is the state of mind of China … This is dangerous.

Chang was reacting to video of a Nov. 28 lecture by Renmin University professor Di Dongsheng, in which he bragged that China has been able to “fool the United States” through their ties to political and business leaders.

“That’s absolutely true, that China does have that relationship into what he [Di] calls the core circle of America’s real power,” Chang told Carlson. CLICK HERE FOR MORE.

90-year-old woman is first to receive Pfizer COVID-19 vaccine in UK
Margaret Keenan, 90, reportedly said she felt “privileged” when she became the first person in the United Kingdom to receive the Pfizer/BioNTech coronavirus vaccine early Tuesday in Coventry, England. 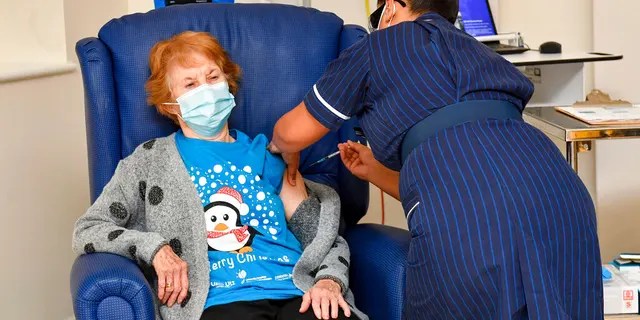 The BBC reported that the vaccine was administered at 6:30 a.m. GMT.

Around 800,000 doses of the vaccine were expected to be in place for the start of the immunization program on Tuesday, a day that Health Secretary Matt Hancock has reportedly dubbed as “V-Day,” a nod to triumphs in World War II.

The U.K. was the first country to authorize the vaccine for emergency use. In trials, the vaccine was shown to have around 95% efficacy. Vaccinations will be administered starting Tuesday at around 50 hospital hubs in England. Scotland, Wales and Northern Ireland will also begin their vaccination rollouts the same day.

“I feel so privileged to be the first person vaccinated against Covid-19, it’s the best early birthday present I could wish for because it means I can finally look forward to spending time with my family and friends in the New Year after being on my own for most of the year,” Keenan said, according to the report. CLICK HERE FOR MORE.

#The Flashback: CLICK HERE to find out what happened on “This Day in History.”

Laura Ingraham said on Monday night’s “Ingraham Angle”  Joe Biden spoke of being a “uniter” and not a “divider” while on the campaign trail. Biden, she says, asked us to be kinder to each other as well.

“So, does Biden really want to unite the country?” she added. “I think to do so would require he show good will, and some respect to Trump supporters. After all, a Biden presidency has no hope for being successful if more than 74 million feel disrespected.”

Not signed up yet for Fox News First? Click here to find out what you’re missing.

Fox News First was compiled by Fox News’ Jack Durschlag. Thank you for making us your first choice in the morning! We’ll see you in your inbox first thing Wednesday.

US adds a strong 379,000 jobs in hopeful sign for economy