Celebrities are leaning on one another to get into the Christmas spirit.

Some of Hollywood’s brightest stars including Reese Witherspoon, Mark Ruffalo and more have jumped on a viral trend poking fun at the “elf on the shelf” tradition.

Elf on the shelf is a popular holiday tradition in which parents place a small elf doll in their home and tell their children that the elf watches over them during the day and reports back to the North Pole at night.

Each morning, after returning from his “mission,” the elf is placed in a different location in the home.

This year, celebrities are having their own brand of fun with the custom and instead, sharing images of themselves with another celebrity super-imposed onto their shoulder. The catch: Like “elf on the shelf,” their names must rhyme.

Elizabeth Banks is among the stars to have jumped on the trend, sharing a photo of herself with Tom Hanks as Forest Gump on her shoulder.

Mariah Carey (left), Nicole Kidman (center) and Jennifer Garner (right) are among the stars to have jumped on the Instagram meme trend.
(Getty Images)

“I know you’ve all heard of Elf on the Shelf, but have you heard of…” she captioned the post, letting fans conclude the phrase with “Hanks on a Banks.”

Witherspoon followed suit, sharing a pic of herself with Olivia Newton-John and John Travolta dancing on her shoulder.

“Oh hey @elizabethbanks! I see your Hanks-on-Banks and I raise you a Grease-on-Reese,” she wrote in the caption.

Jennifer Garner joined in on the fun, sharing a picture of herself (Jen) with Sean Penn on her shoulder.

NICOLE KIDMAN COMPLIMENTS KEITH URBAN FOR BEING SELF-MADE, SAYS HE HELPS HER BE BETTER ACTRESS

Nicole Kidman shared a sultry throwback photo and placed a meditating Mick Jagger on her shoulder, effectively creating “Mick on a Nic.”

The Queen of Christmas, Mariah Carey, went for a more literal rhyme, sharing a pic of herself in holiday-themed pajamas with Jim Carrey’s Grinch creeping on her shoulder.

“Throwing some tinsel on this challenge and presenting you #CarreyOnCarey,” read the caption. 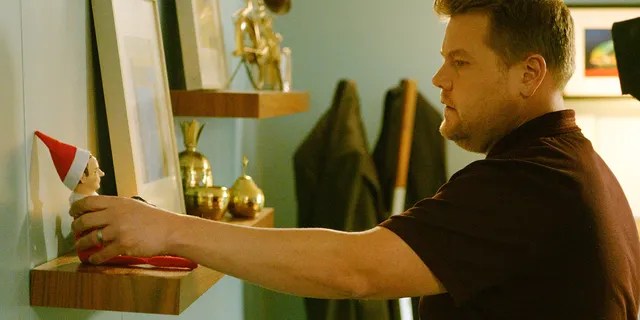 For a sketch, James Corden participated in the Elf on the Shelf tradition in 2017. (Photo by Terence Patrick/CBS via Getty Images)

Ruffalo tapped into his Marvel family and placed Robert Downey Jr.’s Tony Stark on his shoulder (“Stark on a Mark“), while Natalie Portman, shortening her name to Nat, placed Kat Dennings at her side.

Other stars got silly, pairing themselves with other random objects, such as Sean Hayes, who superimposed a prawn on his shoulder.

Debra Messing matched the first syllable of her last name with the Loch Ness Monster, while Katie Couric put “The Brady Bunch” cast on her shoulder.