Everything that needs to go right for Democrats to win the Georgia runoffs, explained

One Good Thing: Netflix’s Ginny & Georgia is so much more than a Gilmore Girls rip-off

How did ‘Drivers License’ become the song of 2021? By exalting in the power of teen-girl melodrama

Georgia voters haven’t sent a Democrat to the Senate in 20 years, and Democrats handily lost the Senate runoff in 2008. But ask Democratic candidates Jon Ossoff and Rev. Raphael Warnock, and they insist things are different now. For one thing, the two Georgia races will determine which party controls the Senate — and by extension — political power in Washington, DC. For another, their party’s presidential candidate just won the state for the first time in almost 30 years.

“Folks didn’t allow themselves to hope,” said Nsé Ufot, CEO of the New Georgia Project, an organization that registered an estimated 500,000 Georgian voters of color and young people ahead of November 3. “Ultimately, you have to conceive of it first before we can build it; folks have to believe that it’s possible. I think that’s why there’s a lot of energy and enthusiasm frankly on both sides as we head to the runoff.”

The two Senate runoffs — featuring Sen. David Perdue (R) versus Ossoff in one race and Sen. Kelly Loeffler (R) versus Warnock in the other — will still be very hard for Democrats to win. Not as many low-interest voters will participate as in the November presidential election, so these runoffs are more about motivating the respective party bases than attempting to persuade swing voters. 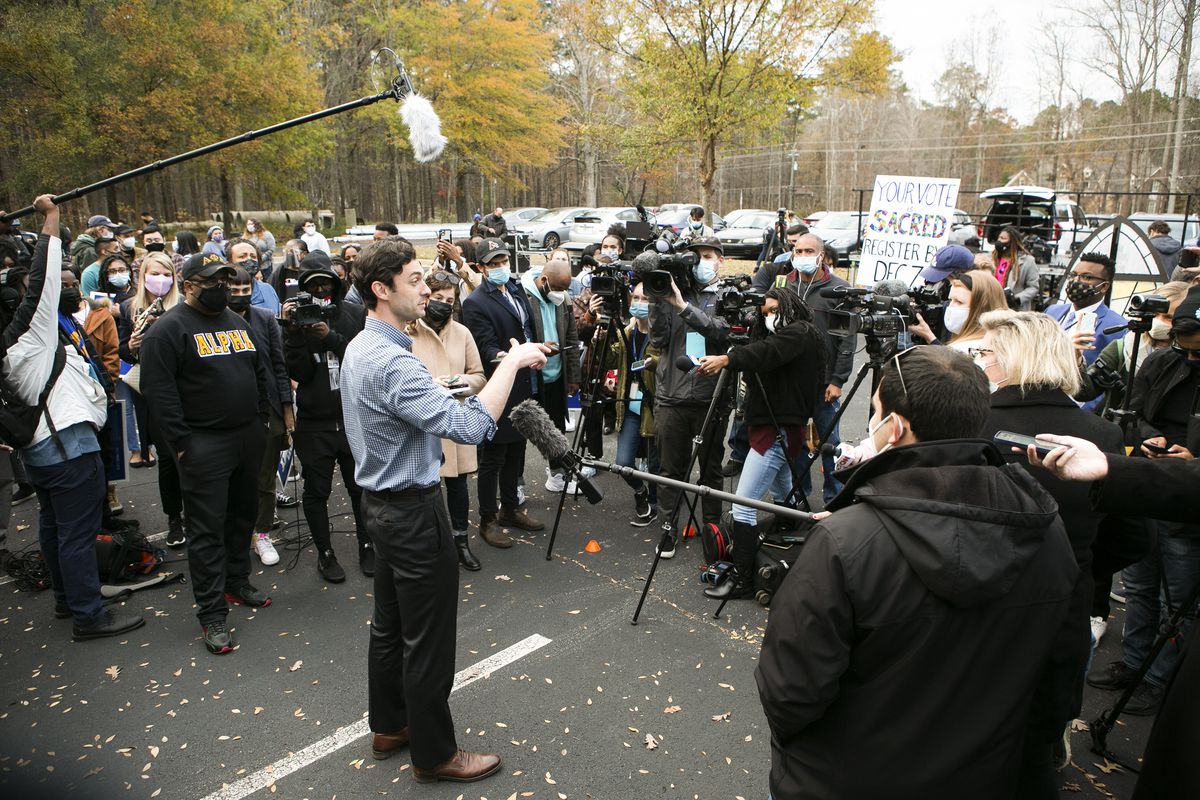 “Turnout is what matters,” Cook Political Report Senate editor Jessica Taylor said. Democrats and Republicans alike need to find their voters, and get them back out to the polls.

While the Republican Party’s base in Georgia is fairly homogeneous, Democrats must turn out a more diverse swath of voters to have a shot at winning the Senate. Black voters undoubtedly make up the majority of Georgia’s Democratic base, but the 2020 election showed a successful coalition is also built on Asian and Pacific Islander American (AAPI) voters, Latino voters, and white suburban women.

“It’s not just one group you’re trying to get out,” said Georgia state Sen. Jen Jordan, a Democrat. “If any of those components really fall off, you lose — and that’s why it’s hard. It’s a much more difficult task for Democrats, but that doesn’t mean it can’t or won’t happen.”

Another important factor to motivate the Democratic base could be that President Donald Trump himself is not going away quietly. Some Democrats feared their voters would fall into complacency after ousting Trump in November, but the president is continuing to refuse to concede to President-elect Joe Biden. Tensions between Trump and Republican state officials in Georgia are high, so much so that Republican Secretary of State Brad Raffensperger said he and his family have received death threats for certifying the state’s results for Biden.

With record-setting turnout in the 2020 election nationwide and in Georgia, Trump proved that he could motivate Republicans and Democrats alike to go to the polls. But will that carry over to January 5?

“Trump is not on the ballot, but are we in a post-Trump era where our people are motivated to show up?” a Democratic pollster told Vox. “That is the big question.”

Black voters make up the core of the Democratic Party’s base in Georgia. But the suburbs in Atlanta that are becoming a source of political strength for Democrats are even more diverse, with AAPI and Latino voters proving to be key parts of the Democratic coalition.

Still, a New York Times analysis of voting data suggested that white suburban voters in the metro Atlanta area were the ones who put Biden over the top in 2020. The analysis found that the relative share of Black turnout actually fell slightly in the 2020 presidential election compared to 2016. Raw Black voting numbers were up, but so were the numbers of white voters.

That’s no guarantee Ossoff and Warnock can replicate Biden’s success.

Even though Biden narrowly won Georgia in the presidential election, it won’t automatically translate to Democratic strength in the Senate races. Perdue ran slightly ahead of Trump by about 780 votes. Ossoff, on the other hand, ran close to 100,000 votes short of Biden. (It’s tough to make the same comparison with Loeffler and Warnock because they were running in a field of 20 candidates.)

These numbers mean that while Biden’s strength helped Democrats force a runoff, there were a number of voters who either just voted at the top of the ticket, or split their tickets between Biden for president and Republican candidates down the ballot.

“I don’t think voters appreciate the amount of ticket-splitting that went on,” Buzz Brockway, a Republican and former Georgia state House member, recently told Vox. “There was a section of voters who couldn’t bring themselves to vote for Trump but voted for Republicans the rest of the ticket.”

So for all the talk of white suburbanites helping flip Georgia, Ossoff and Warnock shouldn’t count on Georgians who voted Trump out but still consider themselves independent or moderate Republicans. Both campaigns need some of those voters, but they also have to consider the sizable Latino and AAPI communities in the Atlanta suburbs. Gwinnett County is both the second most populated county in Georgia and home to the state’s largest AAPI community. Biden won it by 18 points this year. 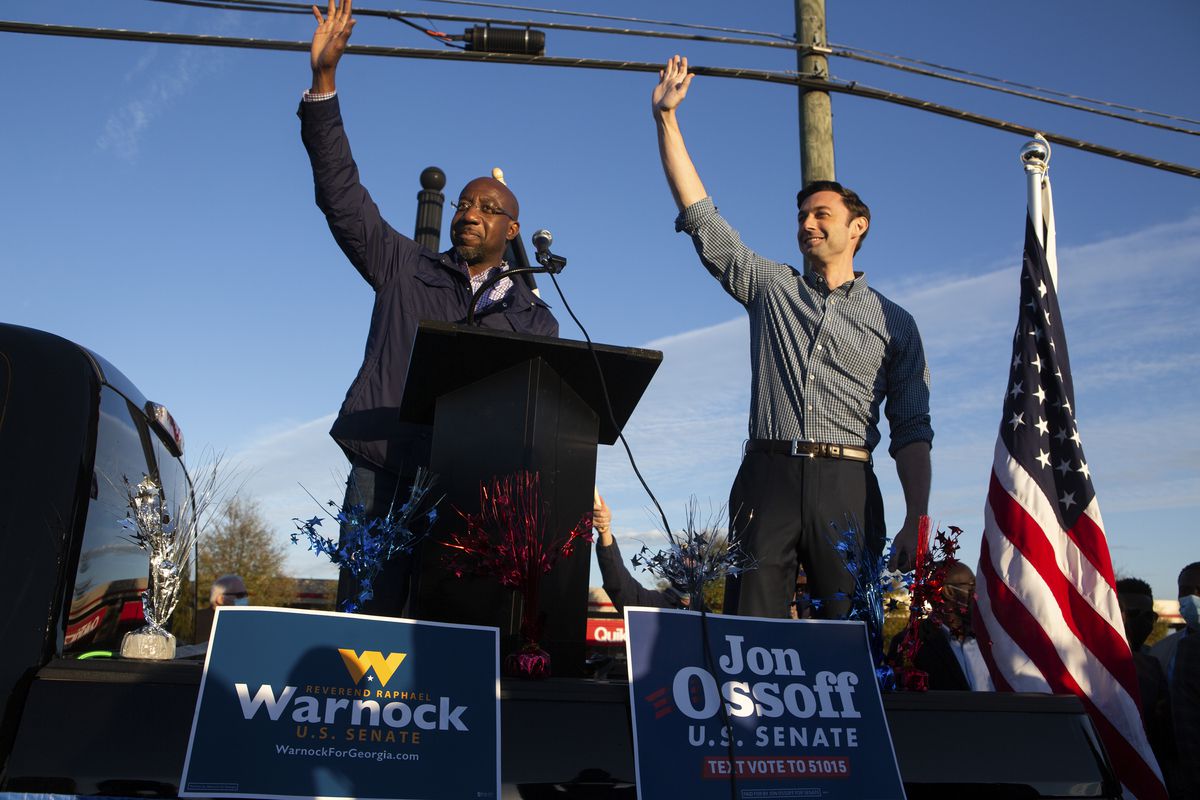 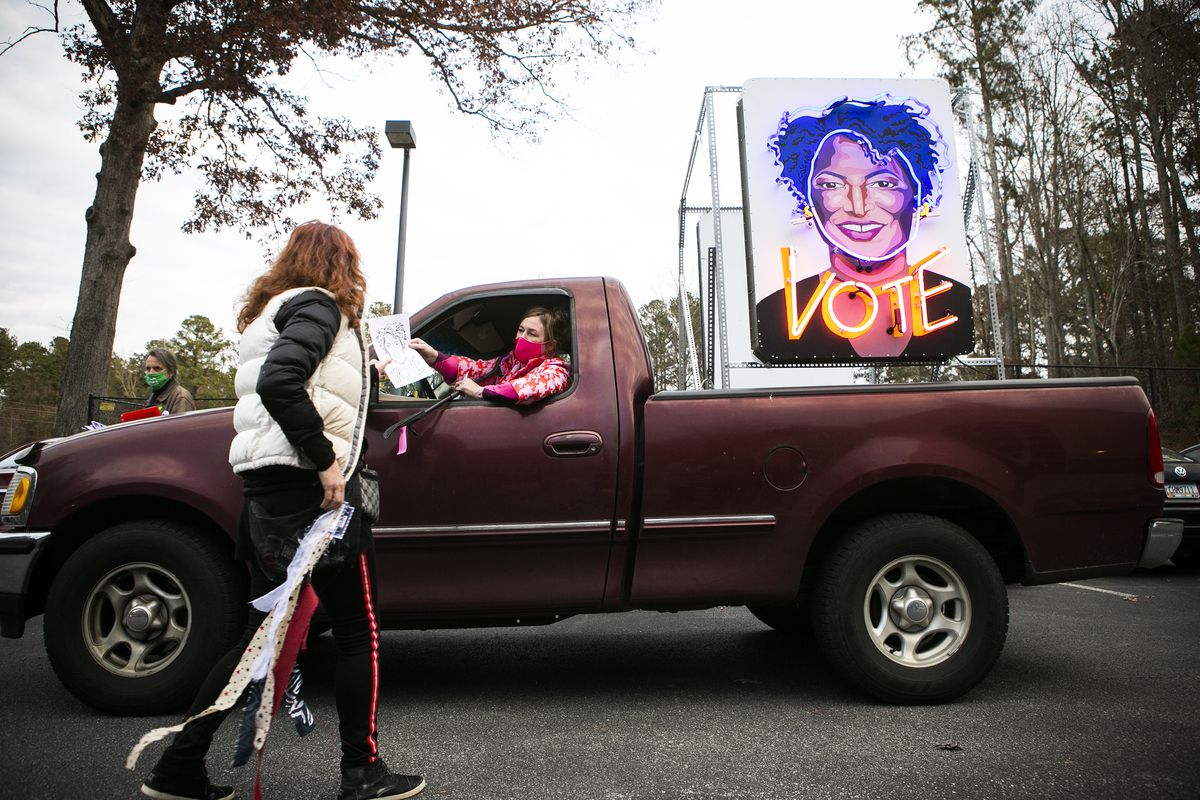 A Jon Ossoff supporter passes out flyers in her truck (featuring a neon Stacey Abrams “Vote” sign) during a rally December 3 in Kennesaw.Jessica McGowan/Getty Images

“In that race, we talked to a lot of first-time voters in [their] language,” Nguyen said. “That’s the outreach some voters need. I think it is a newer concept here in Georgia. We’ve been a red state so long that it’s been hard to get many resources in our state. That’s where the grassroots organizing piece is so critical.”

Nguyen and other local politicians and organizers told Vox that it takes real investment to turn out voters of color again; their support for Democratic candidates certainly is not a given without the necessary work.

“African American voters are persuadable voters, they can’t just be a get-out-the-vote target,” said veteran Democratic pollster John Anzalone, who polled for Biden’s 2020 campaign. “You have to give every voter, Black, white, or Hispanic, a reason to come out and vote for you.”

It all comes down to turnout

One major election may be over, but the work of nonpartisan voter registration groups like New Georgia Project and Georgia Stand-Up, an organization working to increase voter participation and civic engagement, never really stopped.

“We do voter registration 365 days a year, not just during a major election,” said Deborah Scott, the executive director of Georgia Stand-Up. Her mission isn’t to advocate for one political party or the other, it’s about getting people excited to vote — period. That’s a tall order for a runoff that’s happening on the tail end of a long and bruising presidential election, sandwiched in the middle of the holidays, and still during the Covid-19 pandemic.

Scott’s group is especially trying to reach out to voters who don’t turn out often, and may not even know there’s a runoff happening in a month. Her organization recently paired a voter registration drive with a turkey giveaway before the Thanksgiving holiday where they gave out 350 birds.

“We’re trying to make it fun … versus making it a thing they’re dreading,” Scott told Vox. “The excitement comes from us. I don’t know if they’re excited about the candidates.”

Democratic Senate campaigns understand that outreach to Black voters and voters of colors is crucial to any chance they have of winning. Ossoff’s campaign has already called over 300,000 Black Georgians, and launched a statewide voter registration program with eight regional hubs.

Warnock’s campaign has been investing in advertising and outreach to Black voters, serving over 110 million digital ad impressions, spending nearly $40 million on television advertising, and investing in canvass literature drops in an attempt to reach hundreds of thousands of less engaged voters across the state. As the senior pastor of Atlanta’s Ebenezer Baptist Church (where civil rights leader Martin Luther King Jr. presided as pastor in the 1960s), Warnock is a well-known member of Atlanta’s Black community. 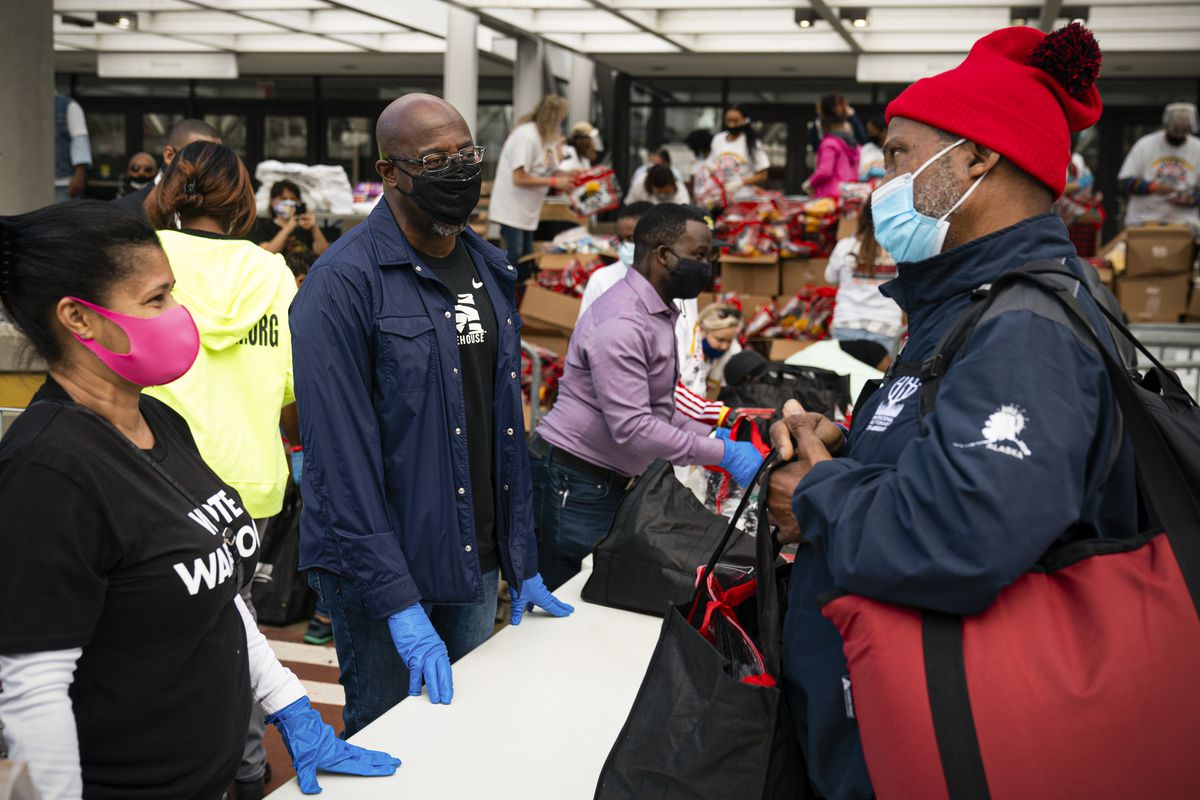 The other thing voter registration groups are hoping makes the difference in the runoff is starting to knock on doors again. Democratic campaigns paused this form of voter outreach during the pandemic, while Republicans continued with traditional door-to-door operations.

“I think that hurt us in a lot of those down-ballot races,” Jordan told Vox. “It was an intentional decision based on the pandemic and not wanting to put people at risk. But what we’ve learned is that we have to figure out a way to still be able to do some of the traditional campaigning and modify it.”

Democrats are trying to do more door-knocking in the lead-up to the runoffs, under the operating assumption that every vote matters. It could pay off in the long run; over 990,000 people have so far applied to vote by mail in the runoff, according to data from Georgia Votes.

“We’re in a strong position; our message to voters is that when we overwhelm the system with our voices, we will win,” Stacey Abrams, the 2018 Democratic gubernatorial candidate and founder of voting rights group Fair Fight Action, told Vox ahead of the November election.

Republican candidates are counting on the outgoing president to energize their base. Trump traveled to Georgia this past weekend for a rally. But the president could also influence Democratic turnout in the runoffs.

Why? The presidential race is over, and Trump is the loser — yet he is still refusing to concede to Biden one month later.

A top elections official named Gabriel Sterling recently harshly rebuked Trump for refusing to condemn the death threats against Raffensperger, his family, and other election workers. And two pro-Trump attorneys, Lin Wood and Sidney Powell (neither of whom are currently part of Trump’s legal team), recently encouraged Trump supporters to boycott the runoffs “until your vote is secure.”

“It has all. Gone. Too. Far” an angry Gabe Sterling says to start off this press conference, offering a fiery condemnation of the conspiracies and harassment and threats officials have faced in recent weeks post-election… #gapol https://t.co/sQobN883sE pic.twitter.com/hPe89mOQcB

Even before Wood and Powell’s press conference, some Georgia Republicans worried that Trump and the lawyers’ continued baseless claims about a rigged election and fixed voting machines in the state could cause his supporters to stay home. Georgia Republican sources told Vox they have heard anecdotally of people saying they plan to boycott the runoff, due to their suspicions of fraud in the presidential election.

A recent SurveyUSA poll of the state found that these claims might be having an impact on some voters. As Vox’s Ian Millhiser wrote:

And keeping in mind that Trump motivated Democrats and independent-minded voters to come out in droves in November, the president’s reluctance to concede the election could keep Democratic voters fired up for longer than they otherwise would have been.

“When there are warring factions within the Republican Party casting blame saying that we should not concede, with the president taking to Twitter and calling people out … all that does, I think, is fire the Democratic base up,” Jason Downey, a Republican and the vice chair of the Georgia state Board of Education, recently told Vox.

Will you help keep Vox free for all?

There is tremendous power in understanding. Vox answers your most important questions and gives you clear information to help make sense of an increasingly chaotic world. A financial contribution to Vox will help us continue providing free explanatory journalism to the millions who are relying on us. Please consider making a contribution to Vox today, from as little as $3.