How ‘Godmothered’ celebrates a world of more inclusive happily ever afters

Eleanor believes that happy endings come from following a simple, three-step formula. Because that’s what the aspiring fairy godmother has been trained to think.

‘Judas’ writer asks: Does art have a place in the face of social injustice?

“Godmothered,” available now on Disney+, tells the story of Eleanor, played by Jillian Bell, as she journeys to Boston in hopes of proving to humanity that magic is still something worth believing in. But to her surprise, she discovers that the 10-year-old girl she is looking to help has grown up into an adult, played by Isla Fisher, who is skeptical of the whole concept of happily ever afters.

“What’s wonderful about Eleanor is that she is a woefully naive, true believer that you have a formula for happiness,” said director Sharon Maguire. “The world she encounters just doesn’t meet those expectations at all, so she has to wrap her head around a whole different type of happily ever after.”

Maguire, best known for directing “Bridget Jones’s Diary,” delighted in the opportunity to make a new Christmas movie — especially one that included elements that she’s never worked with before, like magic. But she particularly appreciated the chance to subvert core elements of classic fairy tales, including those in the Disney canon.

“[The movie’s] got woodland creatures,” said Maguire. “It’s got magic. But Eleanor is untrained and is crap at magic, so you get to subvert the Disney legacy in the name of comedy.”

And “Godmothered” is more than a family-friendly Christmas comedy that pokes gentle fun at fairy tale tropes. It also subverts the traditional fairy tale happy ending and celebrates a more inclusive view by recognizing that true love can be more than just the heteronormative, romantic kind.

Jillian Bell is on a mission to save her profession in “Godmothered.”

“Happy endings can be different things to everybody,” said Bell. “And it doesn’t need to just be one thing that we see again and again.”

She pointed out that fairy tales just “need some updating sometimes” and it’s OK that “they need some slight tweaks.”

“It’s cool that we’re growing and evolving and stories are moving forward with the times,” said Bell. “I think that it’s so beautiful that in this movie, happily ever after can look different for every person.”

The story for “Godmothered” originated from writer Kari Granlund’s love for “the little old ladies who are just these master magicians” that just show up in fairy tales.

“I thought it would be funny if you had a world full of women like that and then you have a young character who’s overeager and saying, ‘I’m ready to go! Put me in the game coach,’” said Granlund. “And then she goes out into the real world and is a fish out of water. It’s more than she bargained for.”

Eleanor’s enthusiasm and mishaps are of course part of the movie’s charm. But her relationship with Mackenzie Walsh, the local TV news producer and mother of two played by Fisher, takes center stage.

“I really liked the idea of playing this single mom who was struggling to get over grieving the loss of her husband and trying to manage life,” said Fisher. “It was just sort of a refreshing opportunity to play the ‘straight man.’” 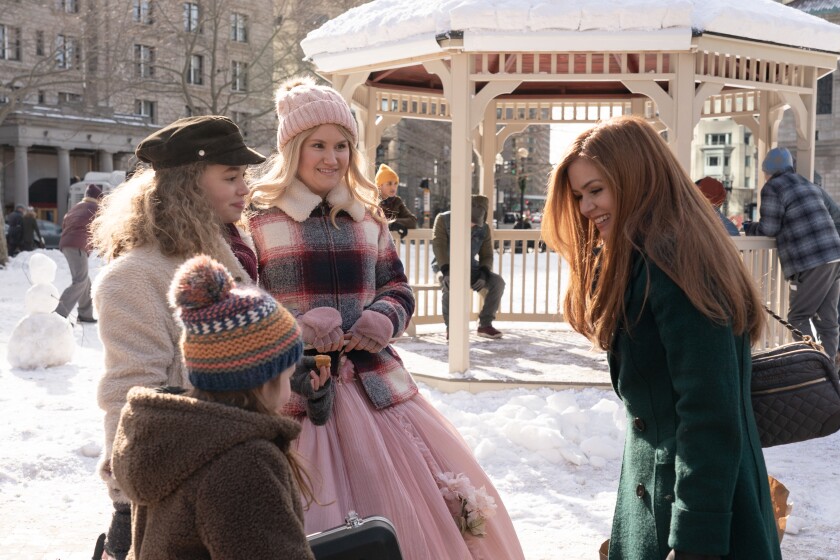 Eleanor and Mackenzie are more than just a classic buddy comedy pair. Their different outlooks also affect how they interact with Mackenzie’s children, which reflects the complexities of parenting itself.

“You have in the godmother, somebody who is sort of always like, ‘You can do it’ and believes in the absolute best possible result in spite of all evidence to the contrary,” said Melissa Stark, who co-wrote the screenplay. But “sometimes, as a mom in reality, you have those moments with your kids where you want to encourage them — tell them that they belong on Broadway, or whatever it may be — but you also don’t want to see them get hurt by a world that maybe doesn’t agree with your motherly enthusiasm. I thought there was a really interesting tension there between the two characters.”

Through Mackenzie, the film also touches on other topical themes such as the plight of local news and troubles with sensationalized media.

For Fisher, “Godmothered” was an opportunity to be in a family-friendly film (“for once”) and she appreciated its modern twist.

“I think that often fairy tales unconsciously romanticize the damsel in distress,” said Fisher. “They often portray women as being vindictive towards each other, or competing to be the most beautiful. That’s an outdated ideology. You don’t need a castle and a prince or a gown to be happy.”

It’s a message that becomes explicitly clear towards the end of the film as Eleanor comes to understand that love and happiness come in many different forms.

For Granlund, who grew up watching fairy tale movies and Disney films, the goal of crafting a story that could “redefine the idea of true love and happy endings for our world today” was personal.

“I was a tomboy [so] I always identified more with the cool stuff that Peter Pan or Aladdin got to do and not necessarily with their female counterparts,” said Granlund. “So it felt like [the formula] needed to be modernized and expanded to show young girls, and even women my age now, that the happy ending doesn’t always have to mean Prince Charming. Life isn’t always that simple and we can find our happiness in many different ways.” 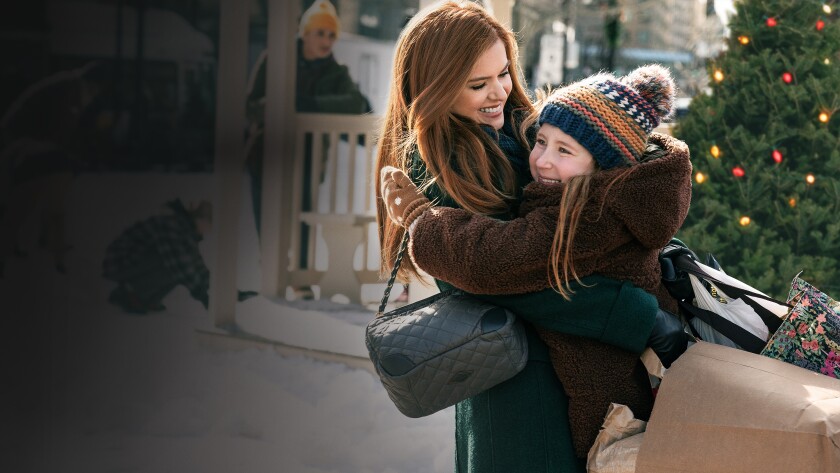 It’s a revolutionary idea when compared to the narrow vision of happiness that fairy tales have traditionally offered, but it’s completely compatible with what fairy godmothers have always represented.

As she researched fairy tales in preparation for her rewrite, Stack saw how fairy godmothers appeared in stories “to give you enough support to step into being the best version of yourself.”

“It’s not about changing the person or making them into anything other than what they are, it’s just about helping them see that they’re already enough,” said Stack. “If we can just open our eyes to what is great already, it becomes a lot easier to find your own fairy tale.”

Despite its magical themes, “Godmothered” could not escape the realities of 2020 and production was forced to shut down in response to the COVID-19 pandemic before shooting was complete.

But “we found a clever way to work in animation,” said Maguire, who had never previously worked in the medium. “Eleanor had always wanted to be in a fairy tale so she got her wish at the end. We worked it in that way .… That was a real trip, to make 2-D animation for Disney.”

Bell said she “freaked out” when she saw herself as an animated character and added that “one of my favorite things is in the animation at the end.”

The scene involves a group of young fairy godmothers-in-training and is further recognition of how everybody deserves their own individual happily ever afters by showing a nonbinary kid is among the new class.

“That, to me, was huge and very inclusive and I was so proud that that was in there,” said Bell, who also believes the young trainee can be seen as a boy. “For some little kid that may mean the world, and to me that is everything.”